Second race of the season

"German Undertaker" Cord Albers used the "mehrzweck-anlage" to start digging graves in the blazing sun on saturday morning, putting a 5.3 on the clock, and kept digging, till the competition was burried on sunday afternoon. The S&S powered Buell was in good condition, Cord broke his personal speed record, doing 217kmh on the 1/8 mile track in Luckau. 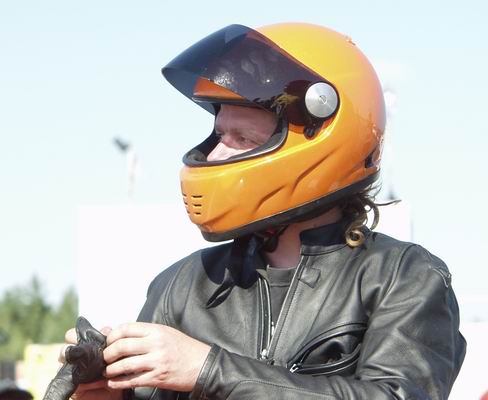 The track was well prepaired, Lars came by to check the bikes, Speaker Bennie `motormouth` Vos arrived in his old Opel , and on friday evening the track was open for training. On the riders meeting the next morning, Jerry Lackey, using the german language with a great sounding american accent, told the racers they got four chances to qualify. With ten topgas teams present, and tropical temperatures predicted, it was murder from the start. Some racers had eight chances, racing in two classes. 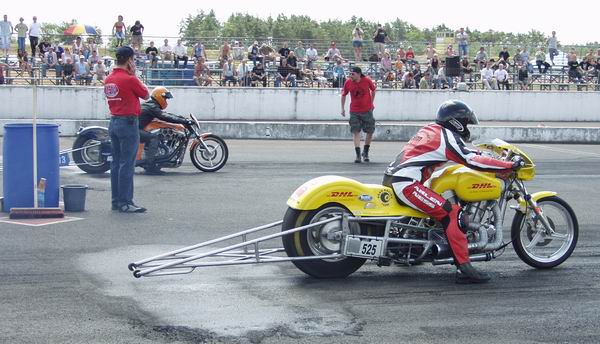 Bernd Niessen was also in the seat of a V-rod in the Destroyer cup class. On the ex-Caspari bike he went down to 5.4 sec. for the first time. Jörg Lymand was in superstreettwin with his modified, but failed to qualify in topgas with his blown Harley. We welcomed the new topgas member Marc vanden Boer, he joined the Euroserie this weekend, but the man from Belgium ended number nine, breaking his wheelybar three times, so they could pack early on sunday. 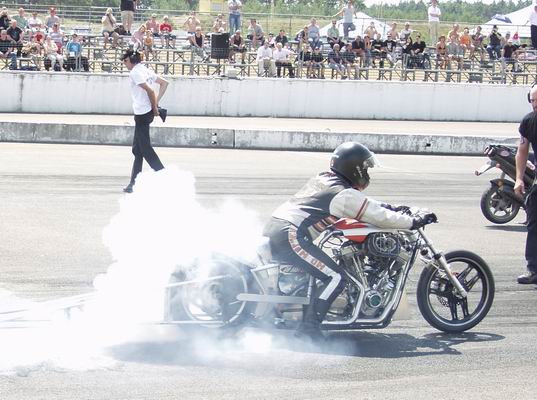 Much better did rookie Frank Peisker. He came with a laid back attitude on fryday, but after qualifying third with the ex-Seifert Harley, he got really fanatic on sunday morning. 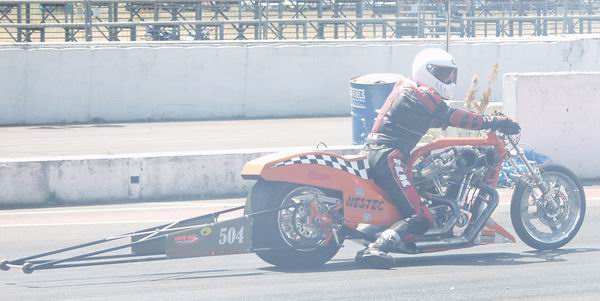 But he got confused by the prestage light of his opponent. It went out when the beam went through the front wheel. Peter Marz didn't hessitate, and sent him home. We also saw "the return of Hermanator", an episode in the continuing story that has been running for 30 years in a row. Flying dutchman Herman Jolink flew off his Ducati in 1999 in Luckau, battling too hard for the fourth place in euroserie during the final race that year. 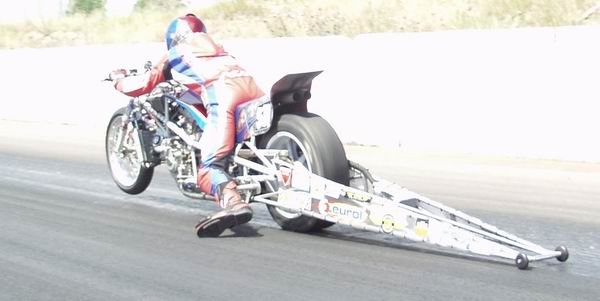 Herman started where he left off, in the right lane. He is now two bikes and three engines further, and was happy with 5.6 after the first session, but dropped from third place to bump spot when the day was done. Team Full Throttle showed dragracing is a family thing. Mechanic Jaap went to Hungary straight after the race, with his wife and kids, for a short holiday, while Harry's family raced home in their camper after he was out in the quarter finals against Roman Sixta 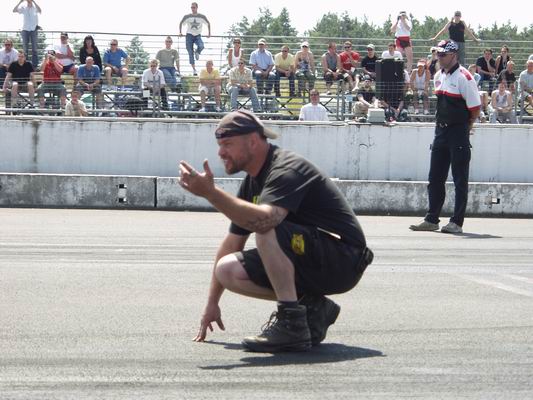 Jaap will pick Harry van Schie up at Budapest airport next week. Another flying dutchman!

Mike Brüsch did a 1.1 sec fixty foot once, but I think he jumped the beam with his front wheel. Brüsschie made it into the semi finals with the green flames spitting Dragons Harley, but became a victim of the undertaker.

He moved up to the third spot in the ranking, just 10 points ahead of Marz, followed by Heitmann, who didn't show up, gearbox still broken, hurry up, Frank, and get some spare parts, too)

Peter Marz was not fast enough for Roman Sixta who when to the finals, but this time his crew was impressed and Peter went home with a new personal best.

Albers finished with 5.2 and Roman Sixta's second place gives him a 370 points lead in the championship, and he will build it out next week, when Cord is absent. Still everybody is chasing a Honda. 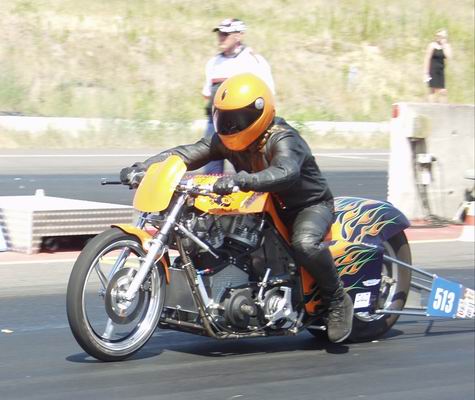 Many thanks to Sammy, Jerry and all the crew in Luckau, for the great race. Very professional, and still relaxed. Hope to do it again next year. 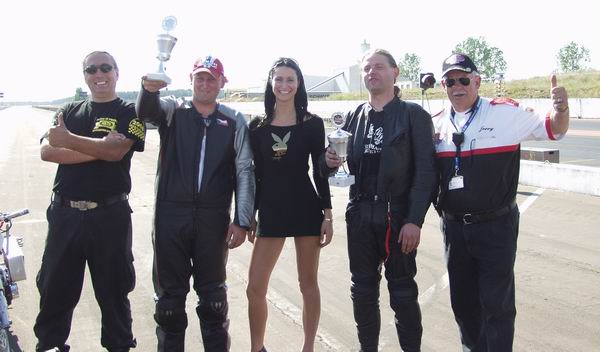 Thanks to Dragons-Mc-Germany for the pictures, With barely enough time to put on clean underwear, I'm packing for Hungaria, hungry for their goulash!

Congratulations to Riccardo Giliberto with his win in Drachten, and to Günther Sohn who joined the six second club in Alastaro, Finland, with a 6.99 on the quarter mile doing 207 Mph (334.5Kmh). even did 6.88 in his final run against Aasen. Well done Günther!