The third race of the seizon was held in Luckau near Berlin, Germany, in the weekend of 1-3 july, at a former military airbase, now called "Jerry Lackey Raceway".

Ten topgassers showed up, and only eight places available in the dragrace on sunday, so again a tough competition to beat the clock, and it turned out that six seconds on the 1/8 mile was to slow to enter!
The free practice on friday evening was canceled, because of rain, it dried up on saturday, so qualifications could start that afternoon.

Just like in our first race, Gerd Caspari was the quickest after round one with 5.4 sec. and in round two he took it down to a 5.3. Otto Bauer came directly behind him with 5.4 and was faster then everybody else. His 214 Kmh turned out to be the highest speed of the weekend (again!), so he picked up the 25 point bonus (again!). At the bottom of the list it were Hartmut Koch, Frank Heitman, and Michael Merse trying hard to get in.

Heitmann solved his gearbox problems of last races,but this time he could not get acces to the data of his electronic fuel injection system. 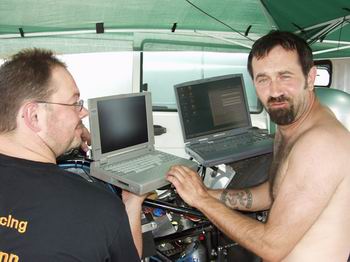 He managed to reach a speed of 197 Kmh, but it looked as if his bike was way to rich at the start. After round two Koch was still in with a 6.3, but that evening Merse finally made a decent pass: 5.99 closed the door. Cord Albers went faster every round, clocking 5.8, then 5.7, finaly 5.6 but he was stuck on place five all day.

That night we were spoiled with a spectacular nightshow and the "patriot" jet dragster an the jet funnycar of team Habermann blasting into the darkness. Next morning the sun was doing the blasting, but we had to wait untill 12.15 for some hot topgas action. Really sunny it went for Caspari, Heinze and Bauer, having no problems with their opponents. The race between the number four and five is always the most exiting, but not this time: Cord Albers was given a foul by the starter, but he did not know what his mistake was... There had been a lot of red lights in the right lane all day in all classes, and flickering prestage lights, so some people blamed it on the timing equipment. Cord took it like he is: cool! So Jörg Lymang went to the semis for free, to meet Gerd Caspari. After his burnout Lymand could not find the first gear, so he shut off, Gerd took it easy: 5.98 sec. Lymand rushed over to his other bike, and later took the win in the Modified Harley class. 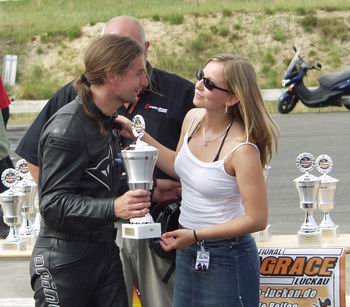 Otto Bauer did a topfuel style burnout up untill the 60 foot mark, and maybe that scared Kay-thomas Heinze so much that he left way to early. Naughty boy! Otto raced 5.546, Heinze did 5.596, so he would have needed a 0.054 better reaction to beat Otto. This put Bauer in the finals against Caspari. Two complete opposites; The biggest man against the smallest! And a heavy homemade bavarian brew against a "prostock style" harley engine in a lightweight aluminium frame. Strangely enough, both combinations were equally quick: about 5.4 seconds in 200 meters.

Two weeks before, Otto was beaten at the startline by Herman Jolink. But this time around Otto was sharp against Caspari, who feared the many fouls and redlights of the right lane and responded to late. Gerd raced even 0.03 seconds faster, but could not close the gap, and had to see how Otto raised his left hand at the finish line while passing it with 208 kmh! "You never know a cowboy till you see him ride!" Jim McClure used to say. 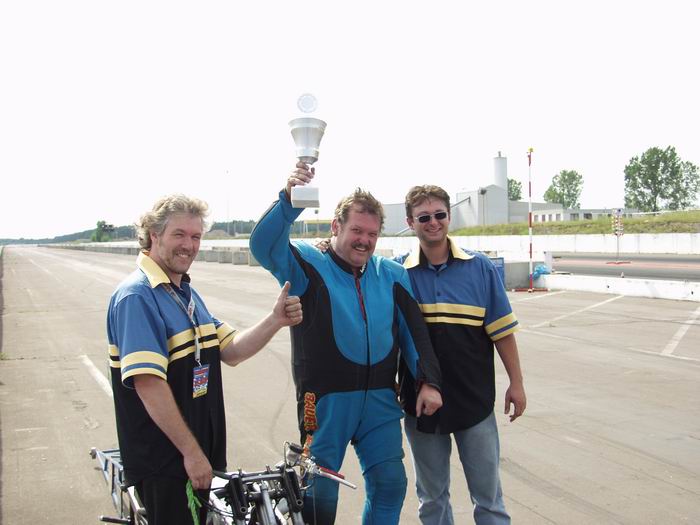 Many congratulations to Otto Bauer and his team that worked very hard for a long time to get this succes! I guess Otto broke some personal records this weekend, I'll check it out. He is now the new leader in the championship, 215 points ahead of Caspari.

Thanks to Mathias Wölk of Fun and Race, it's what we had.
The MSTO should put some oil in their engine, or change their name to Motorsport Timewasting and Redlighting Organisation. But speaker Bennie Vos did a good job preventing the people from falling asleep on the grandstand. Now it's time to put on clean underpants and go to Kunmaderas in Hungaria for the next race. Can't wait for the goulash soup! 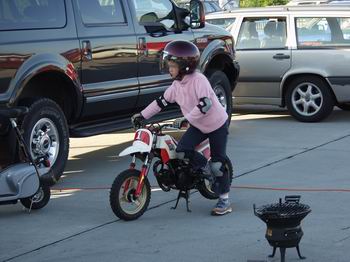