Hockenheim, NitrolympX, the last race in the euroserie.

For the 22nd time in a row the track was used to organise a dragrace on the quarter mile. American experts were hired to prepare the track, and they did a very good job. The strip was in excelent condition. A new topfuel dragster track record was set by Lex Joon who hammered the track in 4.79 seconds! In our class Ricardo Giliberto repeated his record of 2001 in the first qualification round doing 7.95 "fresh from the trailer"! 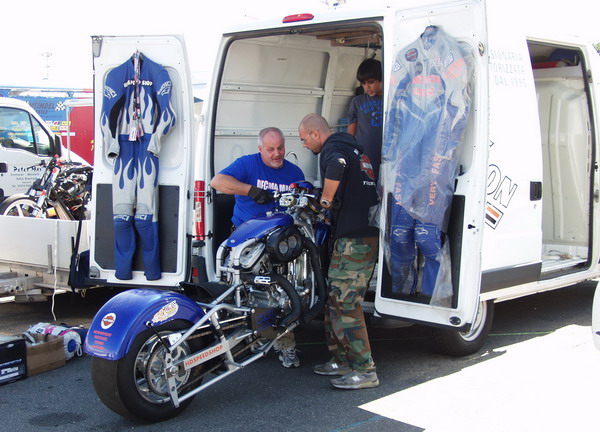 A few minutes later Ulf Ögge bettered him with 7.868 seconds, a time that was good for the number one qualification spot.

Ricardo stayed in the seven second zone doing a 7.890 in the second round, 7.963 in the 1/8 finals, a 7.909 in the quarter finals, and a 7.949 in the semis. His slowest pass was in the final round. Being a little nervous, he shifted directly from third to fifth gear by pushing the button twice. Still, his 8.08 was quick enough to stay ahead of Brian Glaesner who gave it all with 8.202.

Ricardo decided to join our club for this occasion, so we have a new class record (see below)! We hope that he comes to Drachten to also refresh his 1/8 mile time. Giliberto also did the highest top speed, 279.79 kmh. An impressive victory for team "Very Fast" from Italy.

Brian Glaener already sold his bike to Dris Hamadi, but still races it. 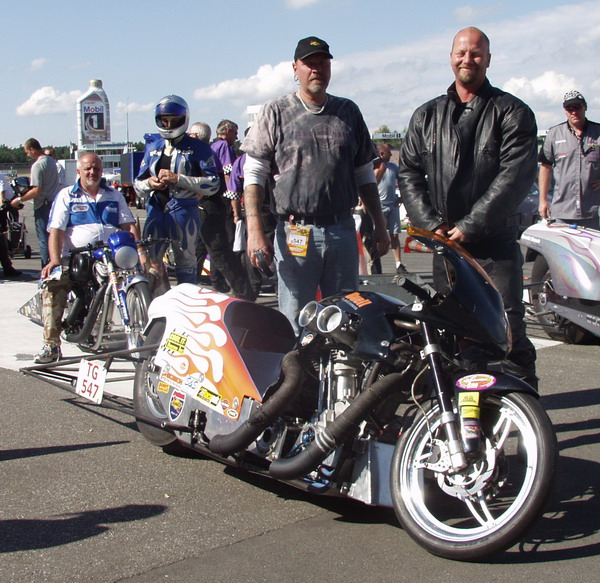 Brian qualified number four with an 8.14.

We already have a new champion for 2007, Gert-Jan Laseur, but for the second place there was still a hard battle going on between Roman Sixta, Cord Albers and Herman Jolink. Roman still works hard on his engine, and forgot to bring the propper data for the fuel injection. His bike stopped just after the start during the first try. And it stopped again after burnout in the second attempt. But during his last chance on saturday afternoon Sixta got his supercharched Honda running and managed to qualify number seven. 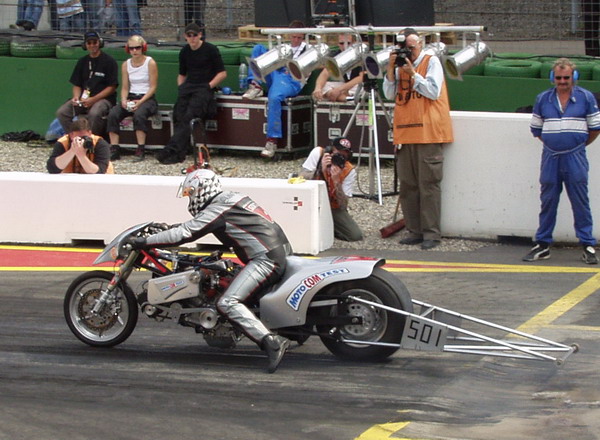 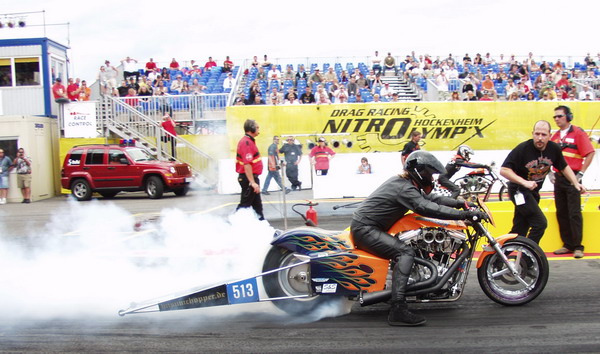 Cord did a new personal best of 8.14, but lost the duel with Ricardo. Herman Jolink qualified eight, so he was up against Harry van Schie who qualified nine with the ex-Heezen bike.

Herman did a personal best speed of 261.8 kmh, but Harry was just a lttle bit quicker and went to the quarter finals.

Bernd Niessen clocked 8.32 during qualifications but couldn't keep it up during the race, where he went to 8.5's. 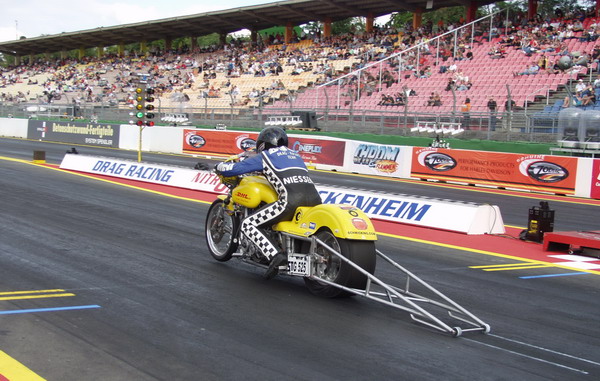 His opponent Bart Salentijn didn't show up after breaking his bike on saturday. Bernd lost to Brian Glaesner, who used his better reaction to stay ahead of the quicker Niessen. 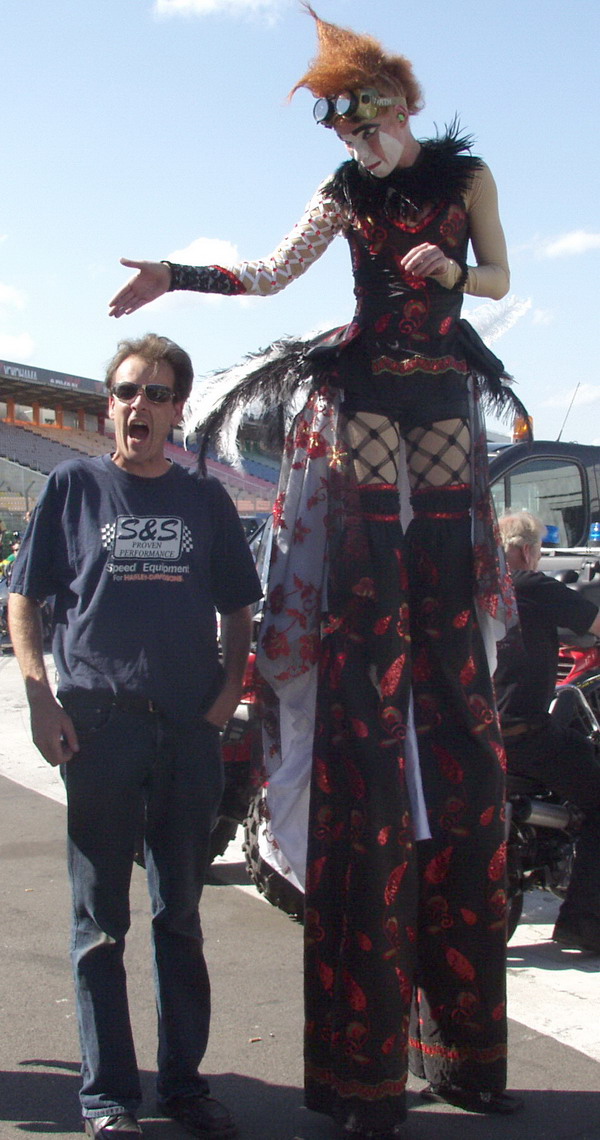 Gert-Jan Laseur came to Hockenheim with the intention to do a personal best, and give good competition to the other fast guys. He had put in a different rear wheel and cams for the occasion but couldn't start the bike in the 1/8 finals, so he was out of the race for sunday. 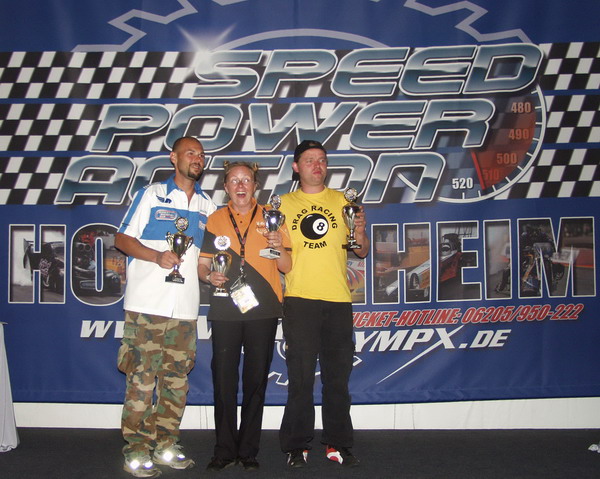 After the race all points were counted, it turned out to be a very close finish for Herman Jolink. He feared to lose his second place in the championship after his early defeat, but got some help from Italy and managed to stay ahead of Sixta and Albers. He should be greatfull to Ricardo Giliberto for stopping them. 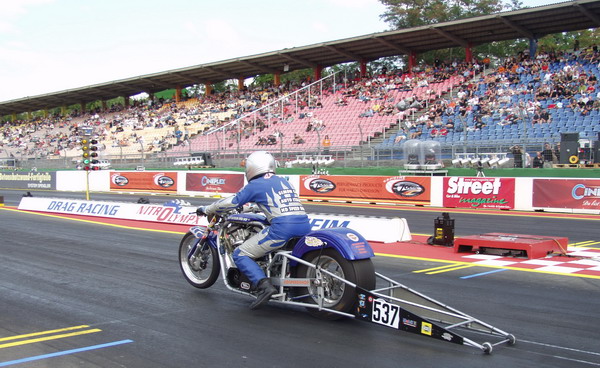 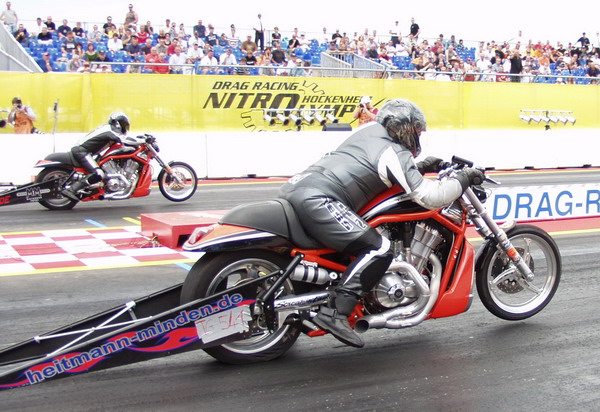 The old and new V-rod champion Sacha Brodbeck redlighted by deepstaging in their semifinals. 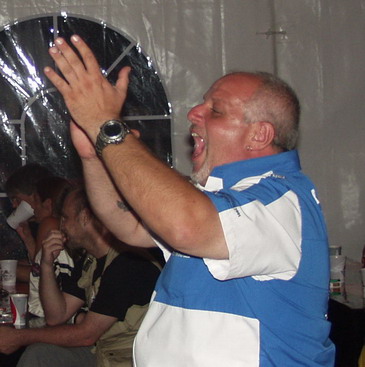 All qualifications and race results are here.

The price giving ceremony of the championship and seasons end party will be held on the 27th of oktober in café Roadhouse in Utrecht. See you all there.

Don't forget to check the 4sale section, there are seven fast bikes on it now and many parts.