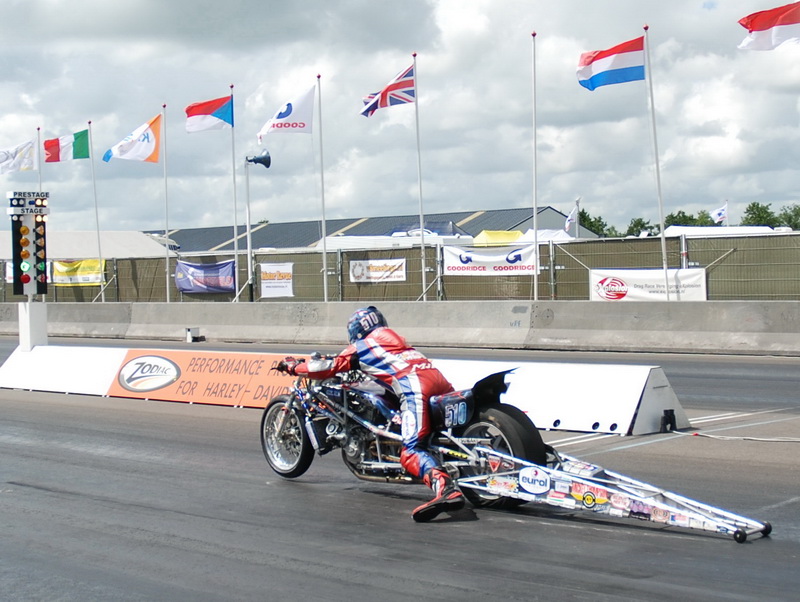 Third race in the euroserie. Very fast racing in Drachten.

We just got back from the Czech republic and it was off to Friesland.
Team "sideburns" was over at Roman Sixta's house after the last race. Roman showed Peter Niklas all the tricks he did to the Honda engine and gearbox. Peter is very happy with that. 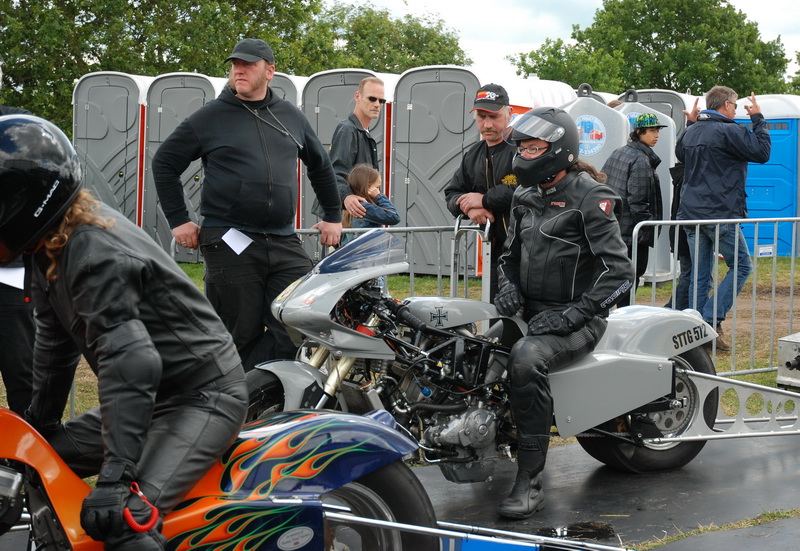 The weather was far from ideal at the airfield in Drachten, showers stopped the race on friday and saturday a few times, and a stupid car accident damaged the guardrail, so the crew had to work very hard to get everything ready for the eliminations on sunday.
That morning it rained again, but in the afternoon we got lucky and all the dark clouds passed the airstrip without spilling a drop. 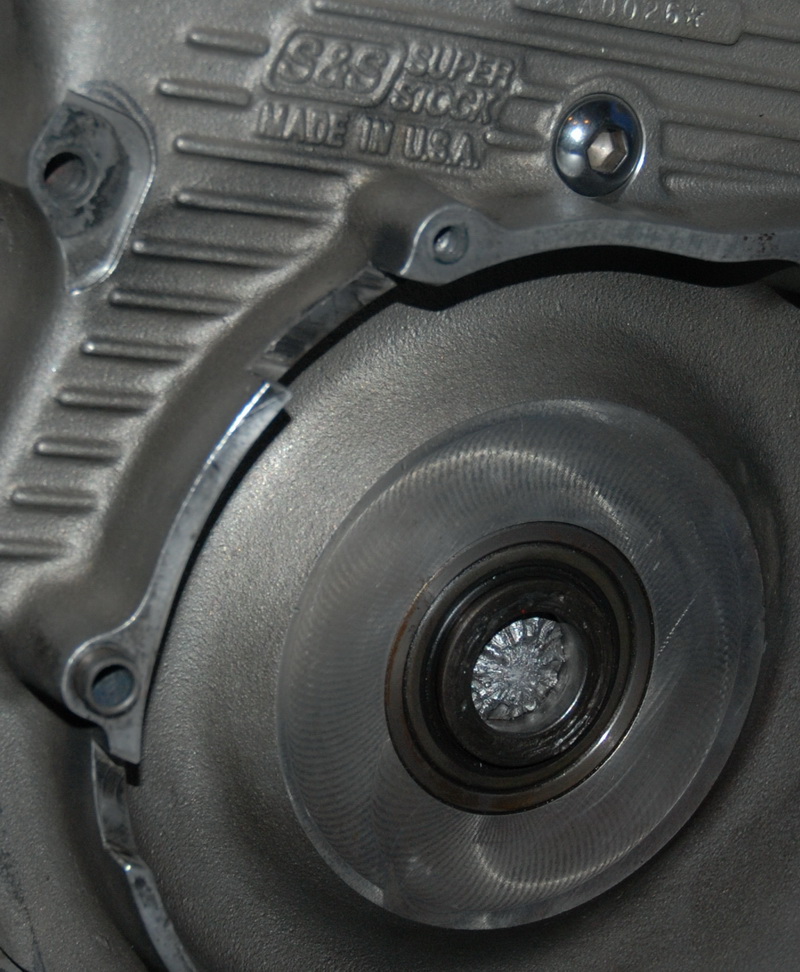 So only three qualification rounds could be held instead of the planned eight. In superwin topgas there were forteen riders present, so a 16-field dragrace was possible, all you needed to do was qualify. The team of Homer Hofmann failed to do just that.
Before even getting the bike through tech inspection, they suffered serious damage to the engine, and were out of the race. 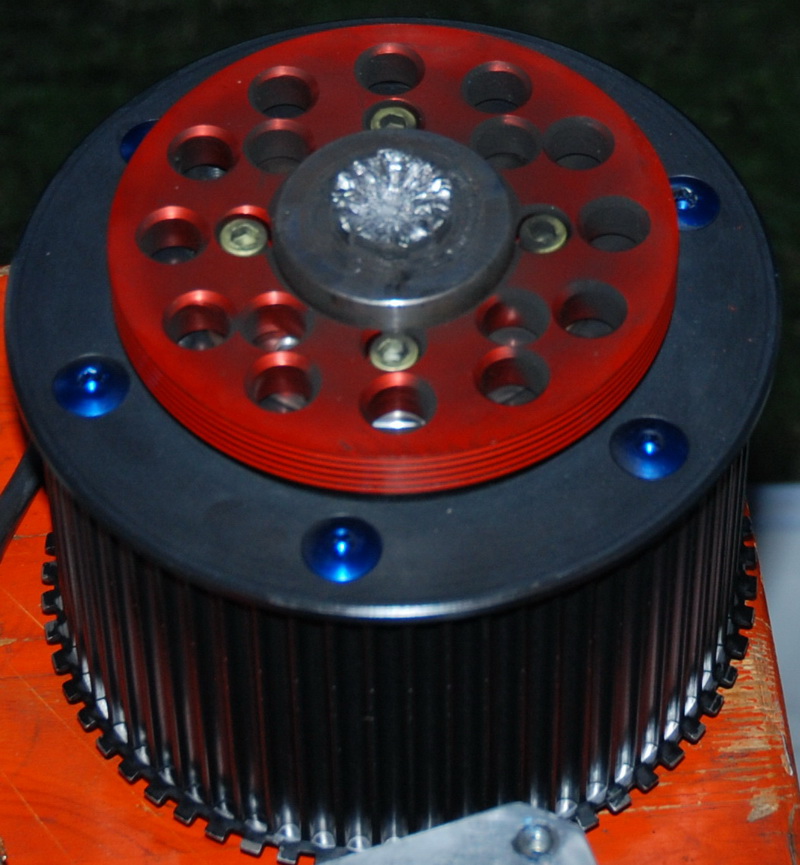 Expectations were high, all fast guys were there. Jesper Thiel, who broke the 1/8mile record and won the first race.
Bernd Niessen, who won in Hoskovice, and Rasmus Olesen who went really fast ( 7.59) over there. And we saw the debut of Gert-jan Laseur's brand new bike, a G2 engine in a Kosman frame. It was in the air the the old 1/4mile record could be broken, but who would do it? 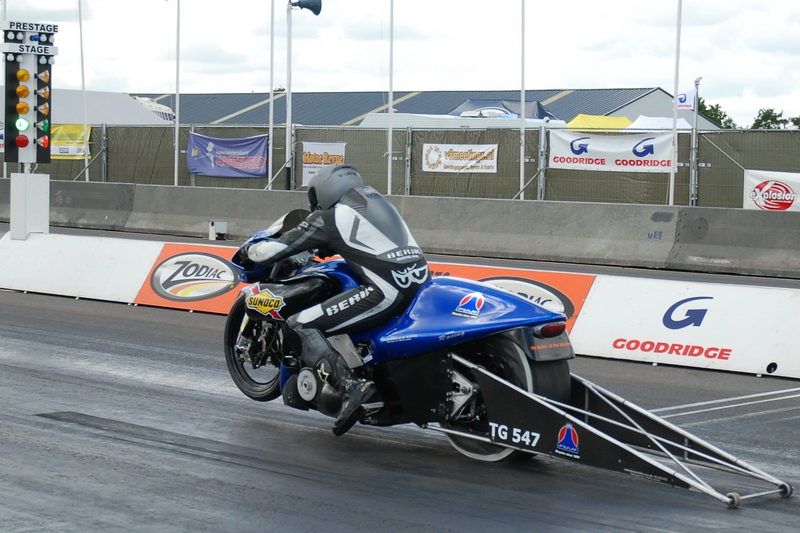 First round of qualifications, it was a fact already, Rasmus Olesen did a great 7.711 second pass, only needed a backup to make it official. Jesper Thiel went in the wrong lane during his first attempt. Bernd Niessen went 8.2, goods for second place then. 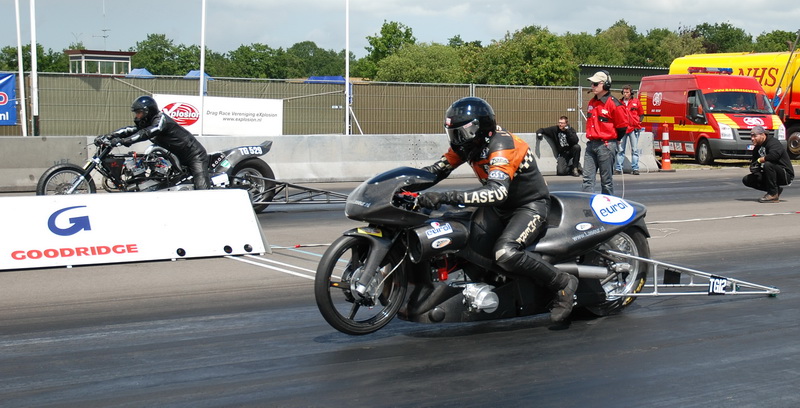 Still no sign of Laseur, but second round he was there. 8.5 seconds for his first pass ever, the rider and crew were more then happy with that! On saturday he tried again, and upset the list with a 7.7!!! The bike kicked Gert-jan's ass every time he shifted gear. He was doing 294 Kmh at the finish line, so he needed to break hard! 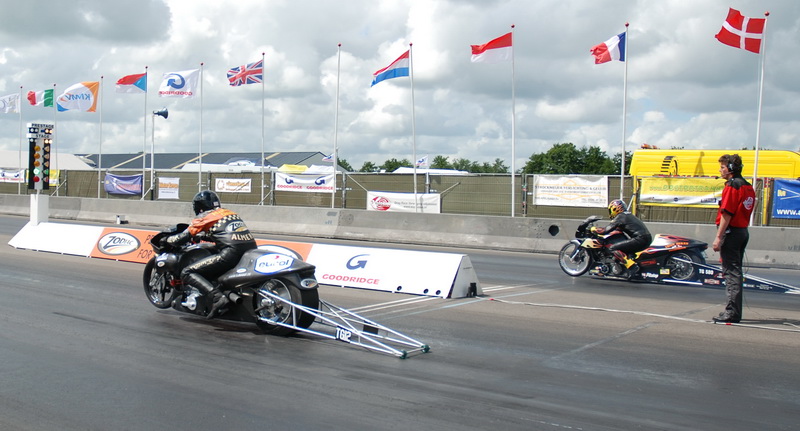 Jesper Thiel didn't get his bike to run well and qualified number last. He got his bike to run in the 1/8 finals, 8.48sec.
Because of poor qualification results, Jesper had the strongest opponent, Gert-jan Laseur is the name. 7.345 seconds and 294 Kmh is his new personal best! 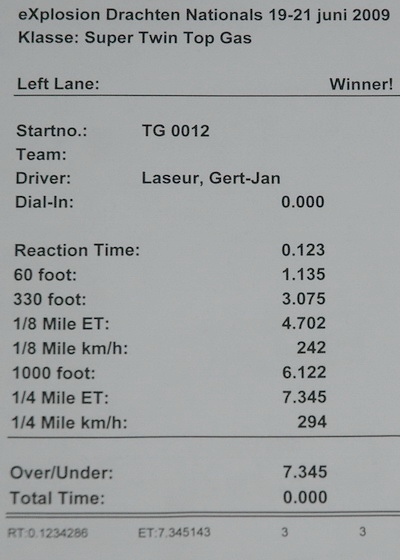 Even the topfuel riders were impressed with that! And plenty back-up for the new record. What a way to brake in a new bike! Next round he had a bye-run. Didn't take it easy, 7.63, the record went down. Then the semi finals against Niessen, Gert-jan dominated again. 7.627 is the new official record of our class. That's a big chunck of about a quarter of second off of the old one! 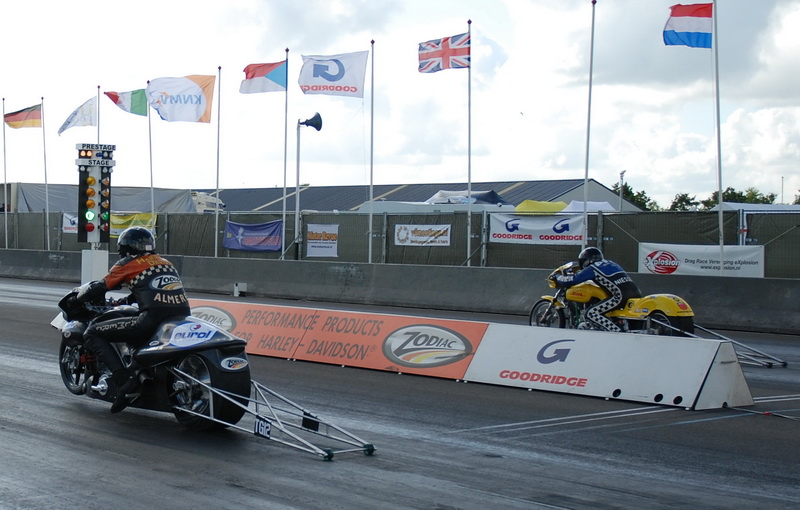 Ronald van de Werken damaged his cam shafts. The team worked hard and searched for parts in the pits. 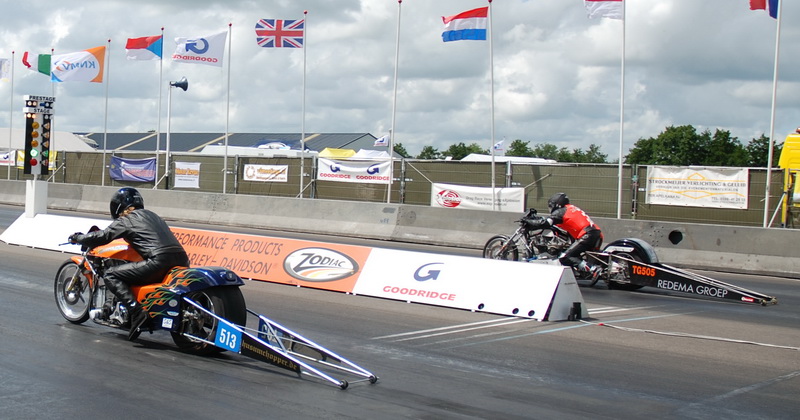 He got it ready to race in time, but Cord Albers (left lane) was too fast for him. 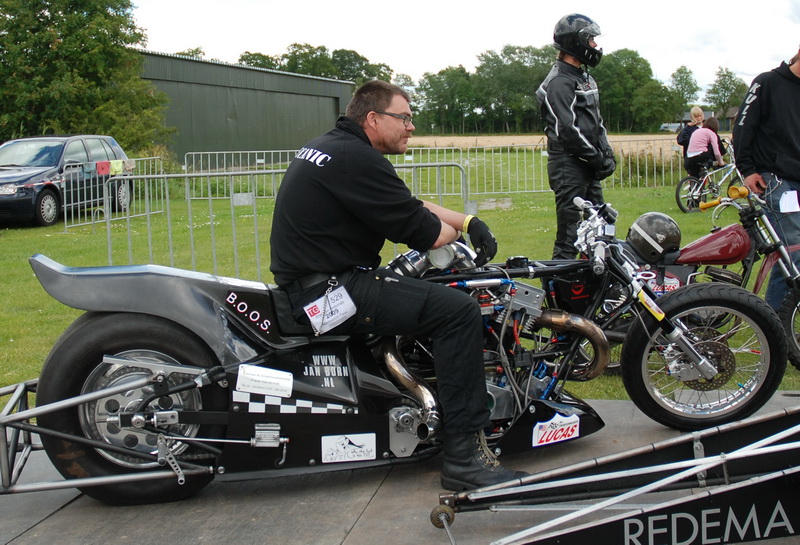 The phoenix rose out of the ashes! Harry van Schie crashed in Malmö, and the bike looked in bad shape. But Jaap and Barney worked really hard. They upgraded the front fork, and fit a wider front tire. And with the help of Bart Salentijn, former owner Heezen, and a lot of good friends the team was ready in time for Drachten, an amazing job!

Harry took it easy during his first pass. He qualified # and was eliminated by John van Geytenbeek (left lane) in the 1/8 finals. John did his first ever 8 second pass. He was the victim of Olesen in the quarter finals. 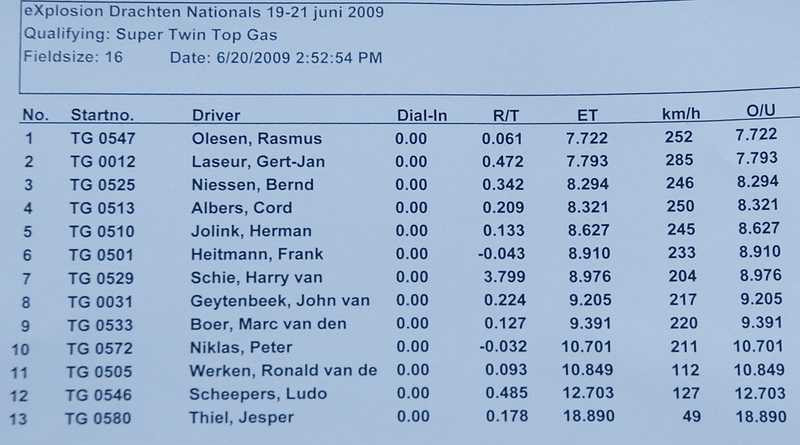 Marc Vandenboer (left lane) was eliminated by Frank Heitmann, who was sent home by Niessen. 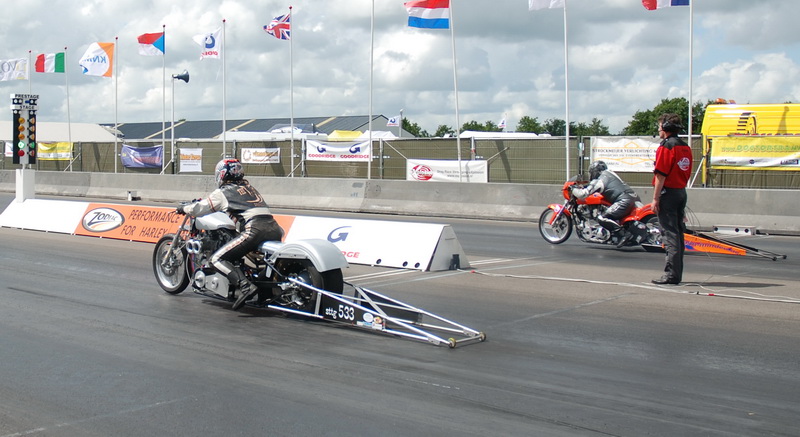 The first time Herman Jolink raced in Drachten was thirtythree years ago. He raced a Ducati in a streetlegal class. He got addicted to the sport and stayed faithfull to the Italian brand. He fitted new Dellorto carbs on his topgas dragbike for this season, they seem to work fine. He did a new best et in Malmö and a best speed in Hoskovice. He started of with a 9.0, but did a 8.5 after that. With a new personal best 60foot time of 1.21 seconds, the Ducati launched like it never did before. Herman qualified #5 and stayed in the 1.2 sec 60foot doing 8.5 and 8.6 runs for the rest of the weekend, and if consistency wins races, Herman Jolink proved just that. He eliminated Peter Niklas and his turbo Honda in the first round. Cord Albers redlighted against Jolink, then Rasmus Olesen couldn't start his bike. Herman didn't take it easy, he blasted down the track on his own in the semi finals. It was getting late, so the call for the finals was made while the riders still needed to be towed back to the pits. With very little time to work on their bikes, Gert-jan and Herman went to the startline to battle it out. 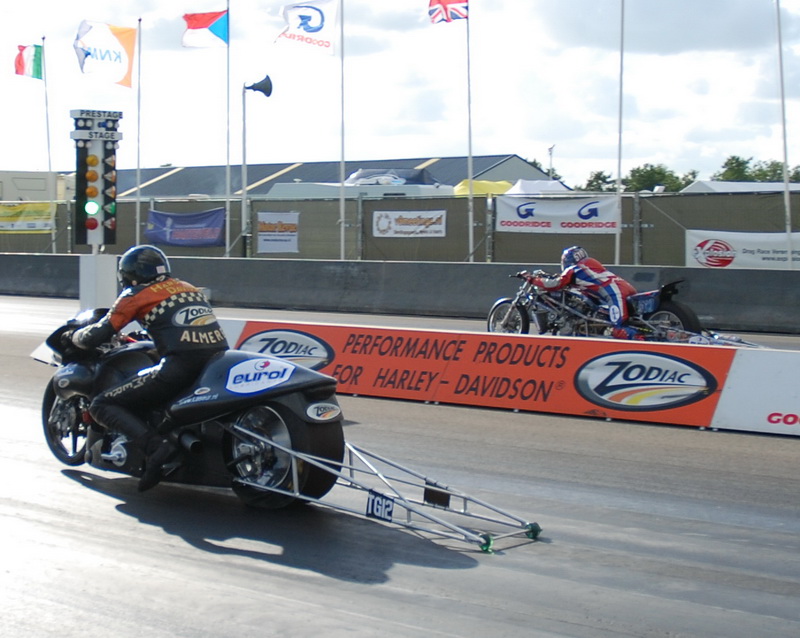 Herman reacted better, and Gert-jan broke his chain in his attempt to capture him. 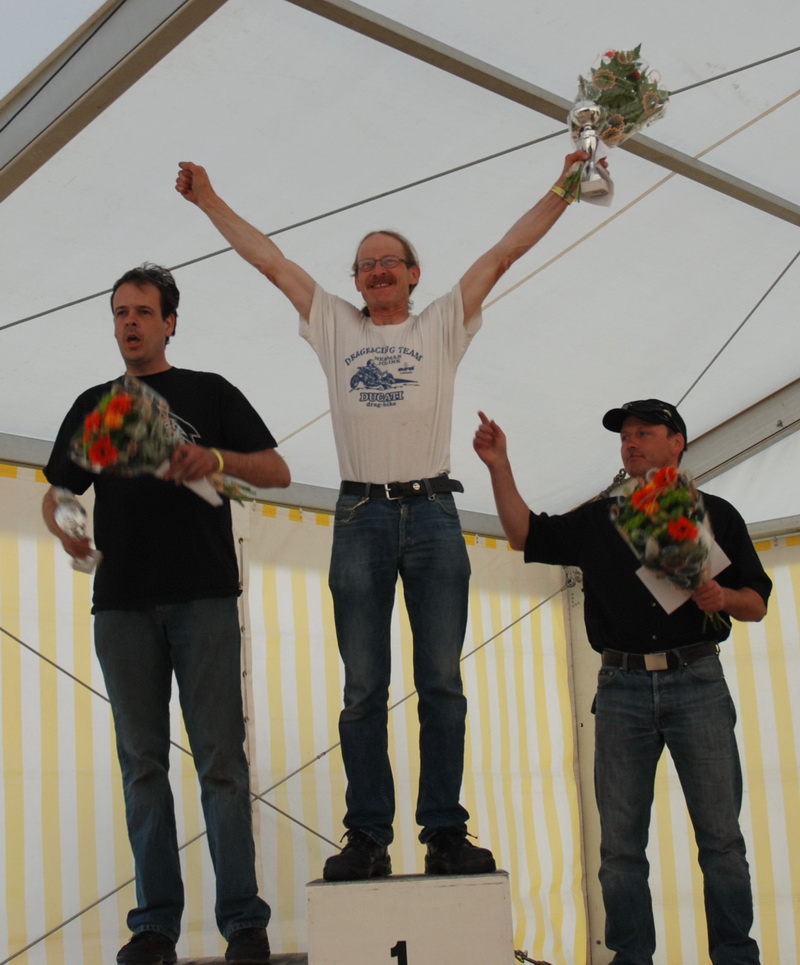 Brend Niessen still leads the championship, now being chased by Herman Jolink, not so far behind. Frank Heitmann is in the third place. Rasmus Olesen's bike won Luckau, Germany last year, so let's see what happens down there. See you all there for the next race.