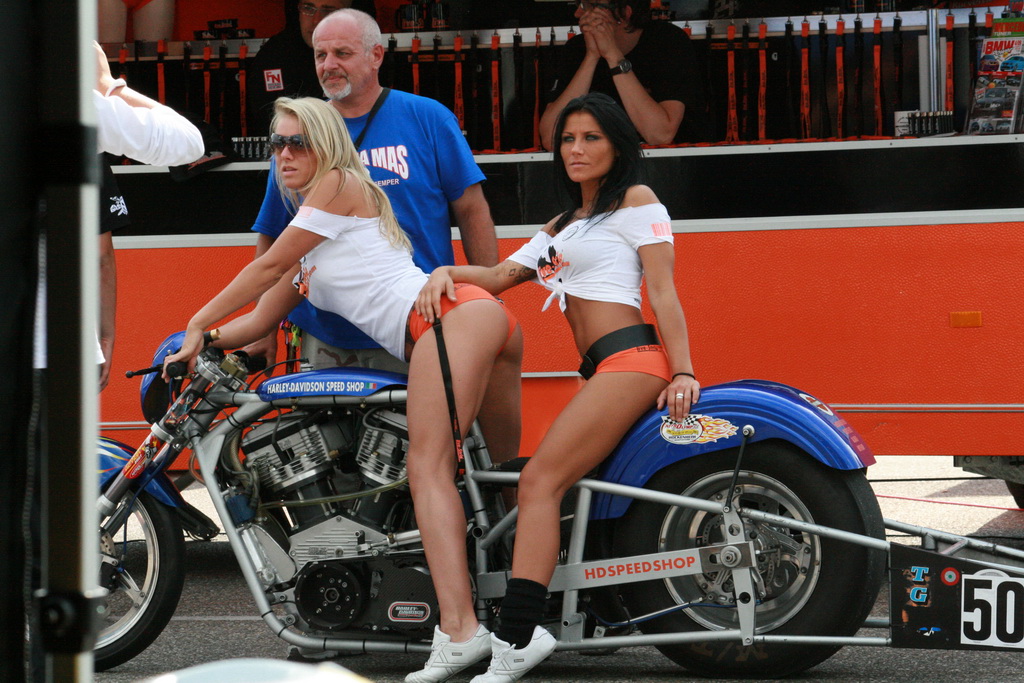 Team 8-Ball of Bernd Niesen and Cord Albers had the best seat in the house. They had a very friendly promotion team in front of their tent all weekend and enjoyed the view while waiting for the next call. (picture team Thiel)

It was probably the best race we had so far this season, and defenetely the best we ever had at Hockenheim, now dubbed Rico Anthes Quarter mile! 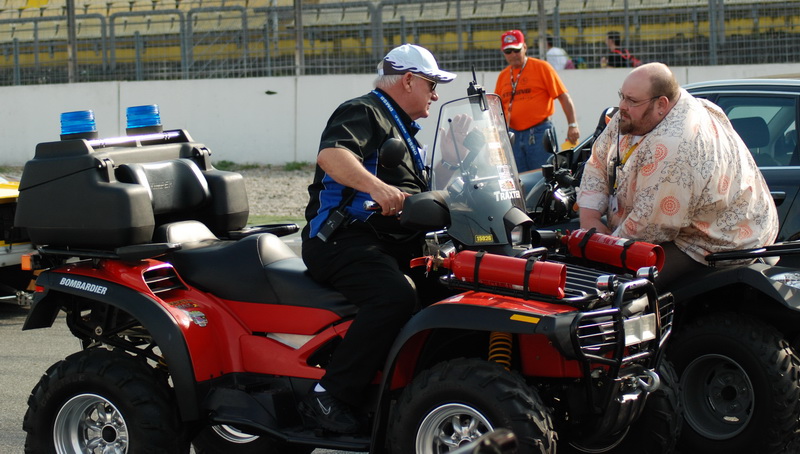 Race director Jerry Lackey and all his crew did everyting they possibly could to make it as pleasant for the 290 riders and drivers that entered the dragrace and were "ready to rubble". Motormouth Bennie Vos was informative and entertaining as always and a huge crowd showed up as usual.
The FIA had an offial championship race, so topfuel dragsters were racing, top methanol funnycars and the dreaded doorslammer Promod cars. No big oil spills by them but a stupid accident where a car backed up into another car and pushing it into a third! 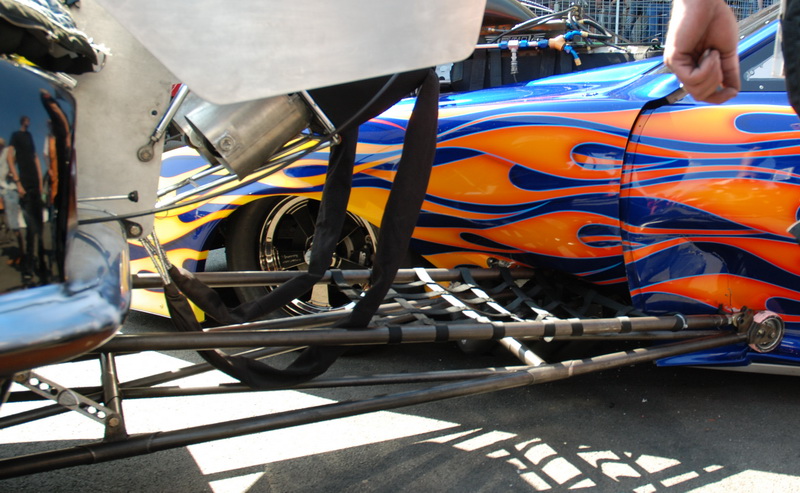 More then an hour was lost to clean up the mess, and so our fourth qualification round was skipped, eliminations of the large classes started saturday afternoon. A total of 41 superstreet bikes had to eliminate a 32 field.

In our class 19 teams had entered and made it through technical inspection. Rasmus Olesen from Denmark did not get much further then that. 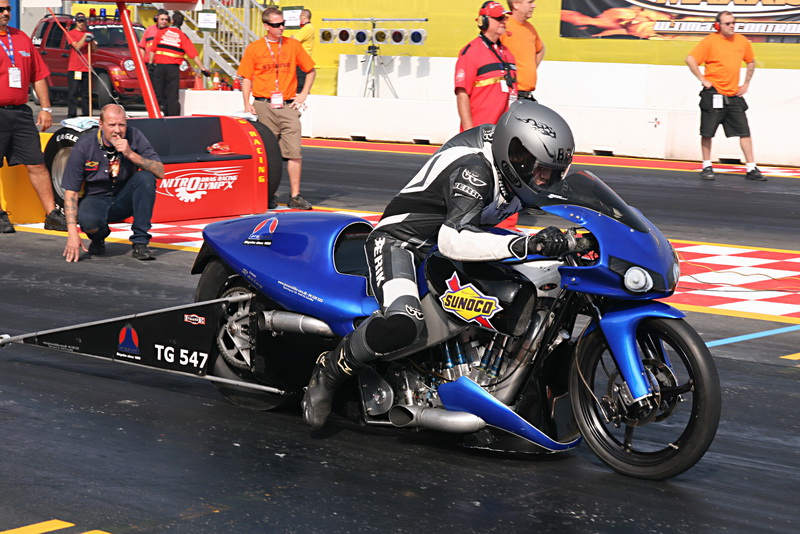 The team of Brian Glaesner had to miss the last race and had worked very hard to get all broken parts repaired in time. But the bike failed on the track. It stopped after a few meters all three attempts. Rasmus was given track time for a test run, just after our first elimination on saturday evening. The 3 liter NHRA prostock bike stopped again, so a fourth qualification round would not have helped him into the ladder. Wrench Sonny told me the team will try to find and fix the probems and come to the next race. 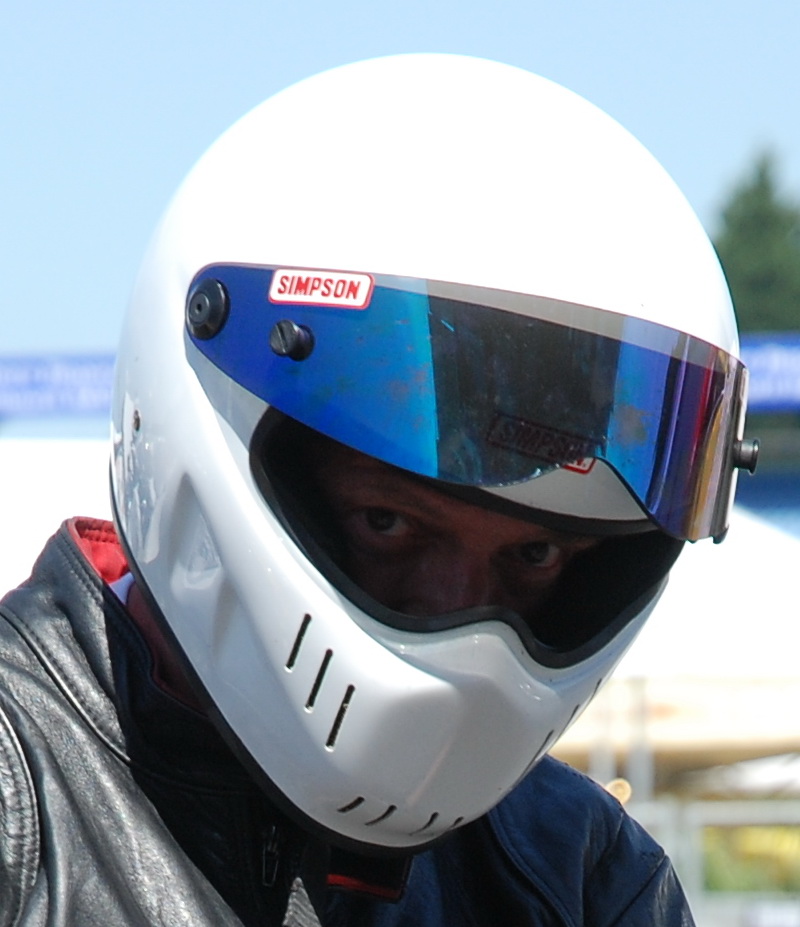 It almost looked like a reunion of the STTG champions. I counted six of them.
Job Heezen was there to compete in the Nitro Bike Chalenge on the Zodiac supertwin doing some great passes.
Former champ and fellow nitro biker Roman sixta came out with his Honda SP1 to compete in our class for one last time. 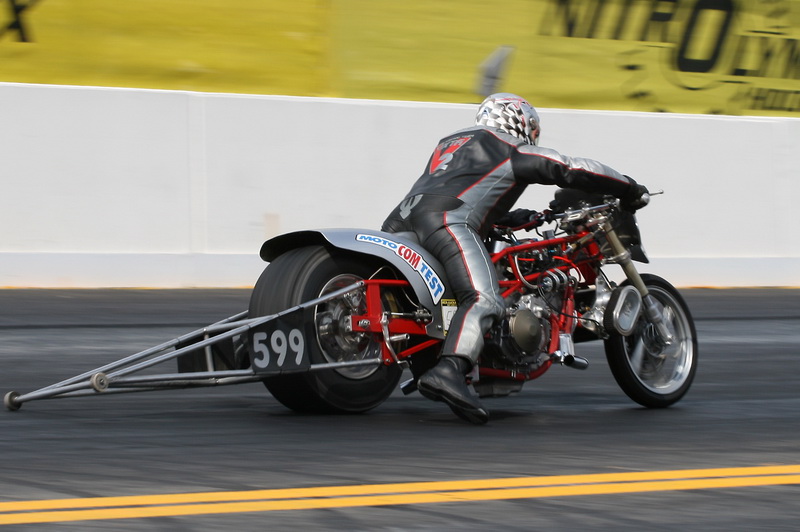 Axel Seifert was present a spectator again, and Ricardo Giliberto had plans to do the same thing.
But sitting on the grandstand is not Riccy's thing. So he dusted of his bike and came to fill the field. As you can see on the first picture he also has new promo pix of it soon.

2007 champ Gert-jan Laseur has a new powerfull bike and was ready to put the horses to the track. 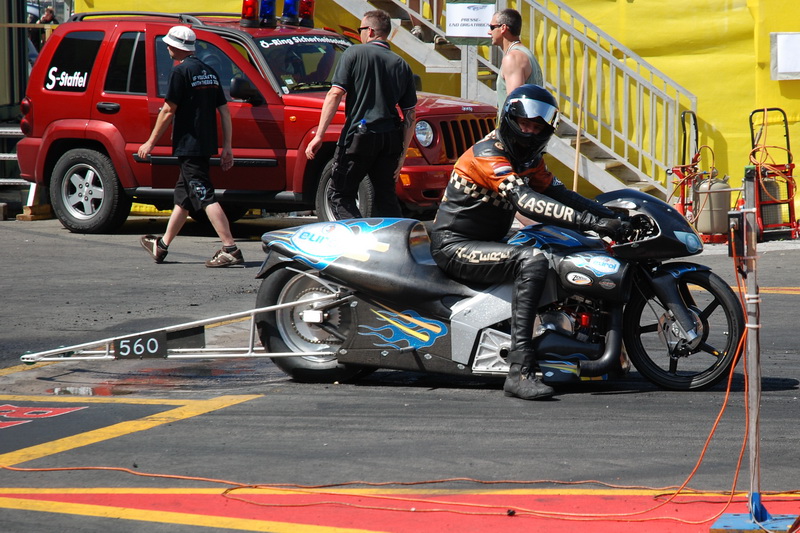 The reigning champion Frank Heitmann had bad luck all weekend. 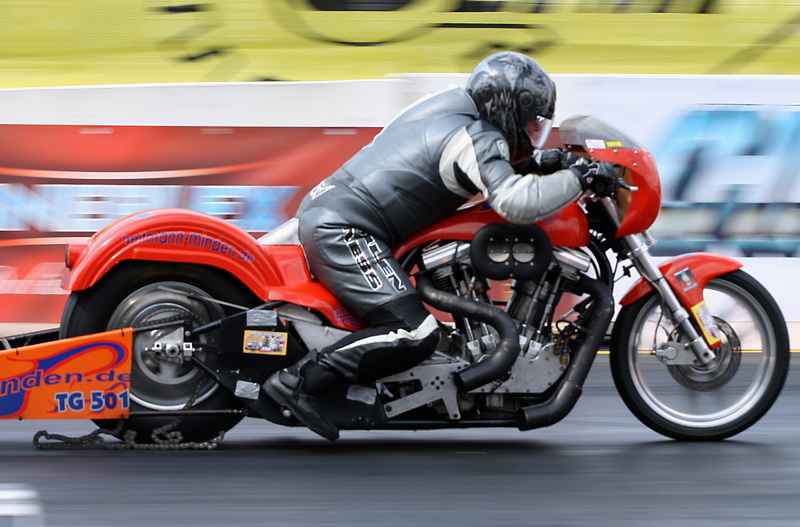 After breaking his chain he also wrecked a gearbox, and failed to qualify. 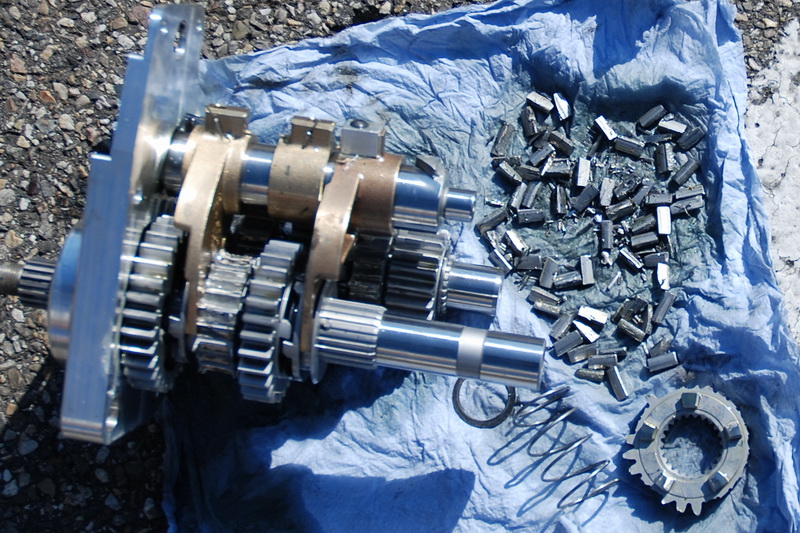 Jesper Thiel has a big chance to be the next champion. He qualified #2 after the first round, and copied his run in the other lane at the second shot. So he had the honours of being the record holder for two days in a row. 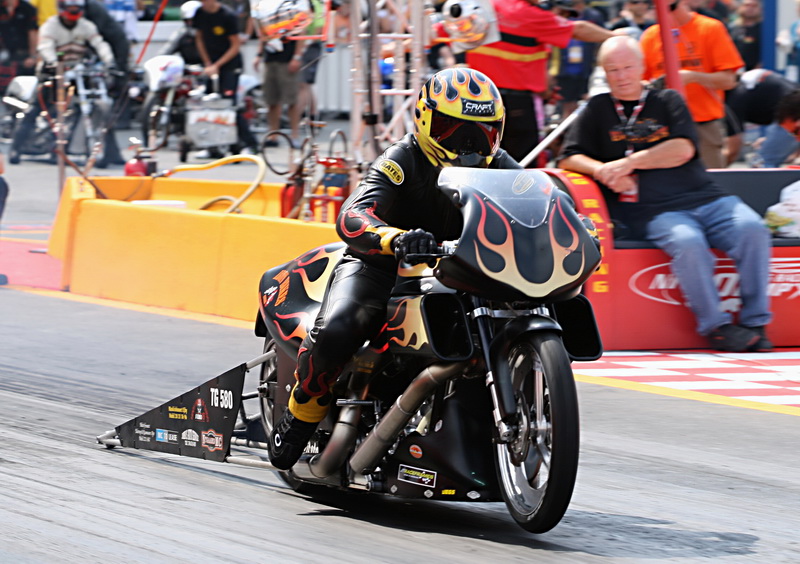 But it was snatched away from him by Gert-Jan Laseur in the semi finals. Jesper is still chased by Bernd Niessen.Jesper still needs to qualify and win one or two rounds in Drachten next week. In dragracing anything can happen! 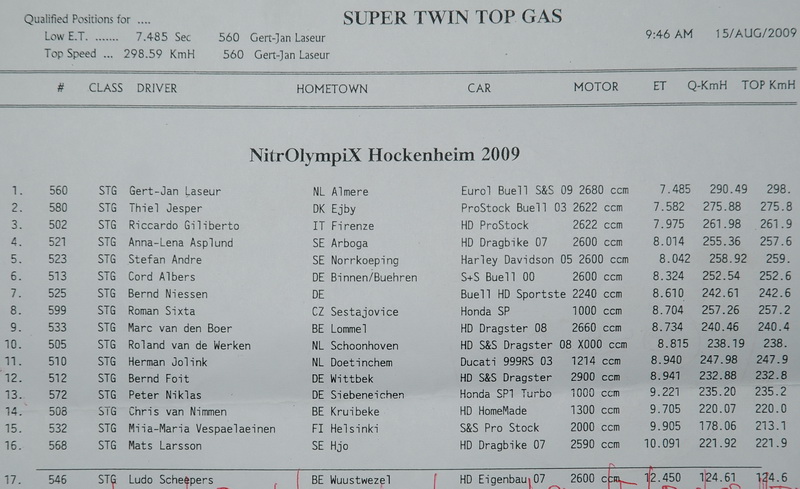 While Luca was having lots of fun, Ricardo raced like he always does. He broke our record twice in the past on the track, so he knows it very well. He qualified #3, a great job in this strong field. Luca cooked pasta, pene with tuna was on the menu. To give it an extra flavour, he cooked in Herman Jolink's kitchen.
Herman is a Dutch Ducati rider faithfull to the brand all his racing career. He only missed the event in Hockenheim once and is still sorry for that. Herman came with a new 1198 cc superbike engine in his frame. He almost lost hope to get it ready in time. VandenBerg engineering helped him with piston machining, new manifolds and adapters for the exhausts on wednesday just before he left. He did two passes in the mid-nines with it, not bad for a new unknown motor, but it needs a lot more tuning and a race is not a test facility.

So Herman decided to put his old engine back in the frame.
With the help of his team (a Swiss, a Dutch, a Swiss and a German guy) he went to the startline very early on saturday for a third attempt. I don't know if we ever did a full qualification session at 09.30. Herman is an early bird, and he once made a pass at 08.18 in Vandel (a personal best early time). He ran a 8.9 to qualify # 11. Just before Herman ran, two Honda's made a lot of noise. Peter Niklas ran against Roman Sixta. Turbo Honda against supercharged Honda.
Niklas did a new personal best again, he does that almost every race, the team is blessed. 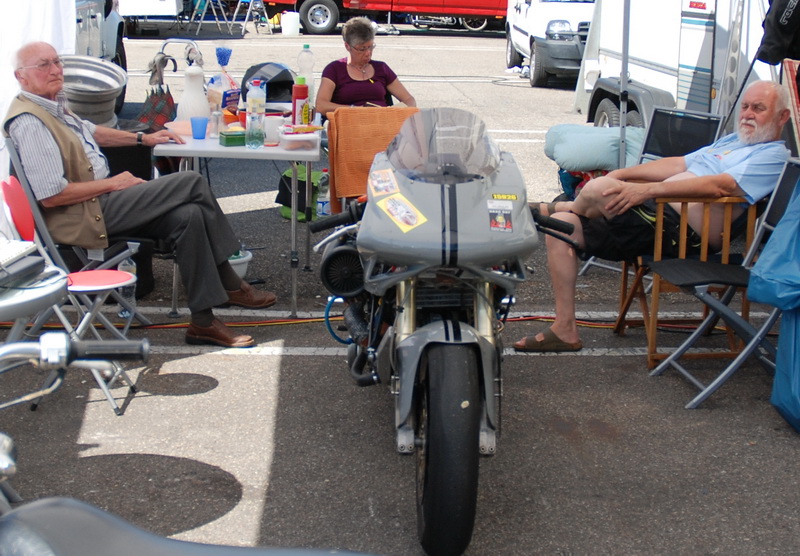 The Belgian racers were at full strenght. Criss van Nimmen came out to race with us although he had planned to take the year offf.
His excuse was that he was on holydays, and wanted to camp with his friends and play with his V-rod toy bike. 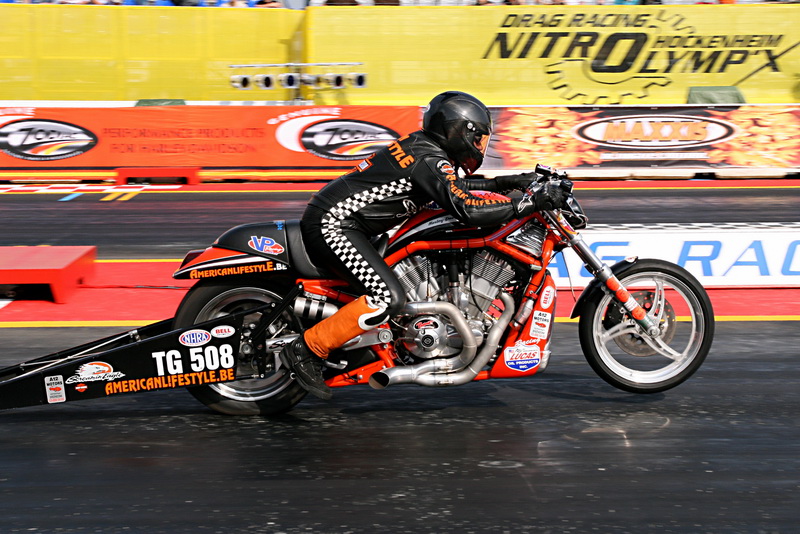 For serious racing he has a much bigger bike. The loss of horsepower was made up by Marc Vandenboer. He changed the front pulley last week after some serious calculations, and it made the bike run faster. Marc is on the right track.

Ludo Scheepens was the third Belgian present, and is at the bottom of the list every race. Now he could not even line up as first alternate, he damaged his engine, and shows interest in other bikes that are for sale.

A sportsmans ladder was produced first, confusing some riders who already calculated their opponents.
A few words with Jerry was all it took to change to the proper flow chart. 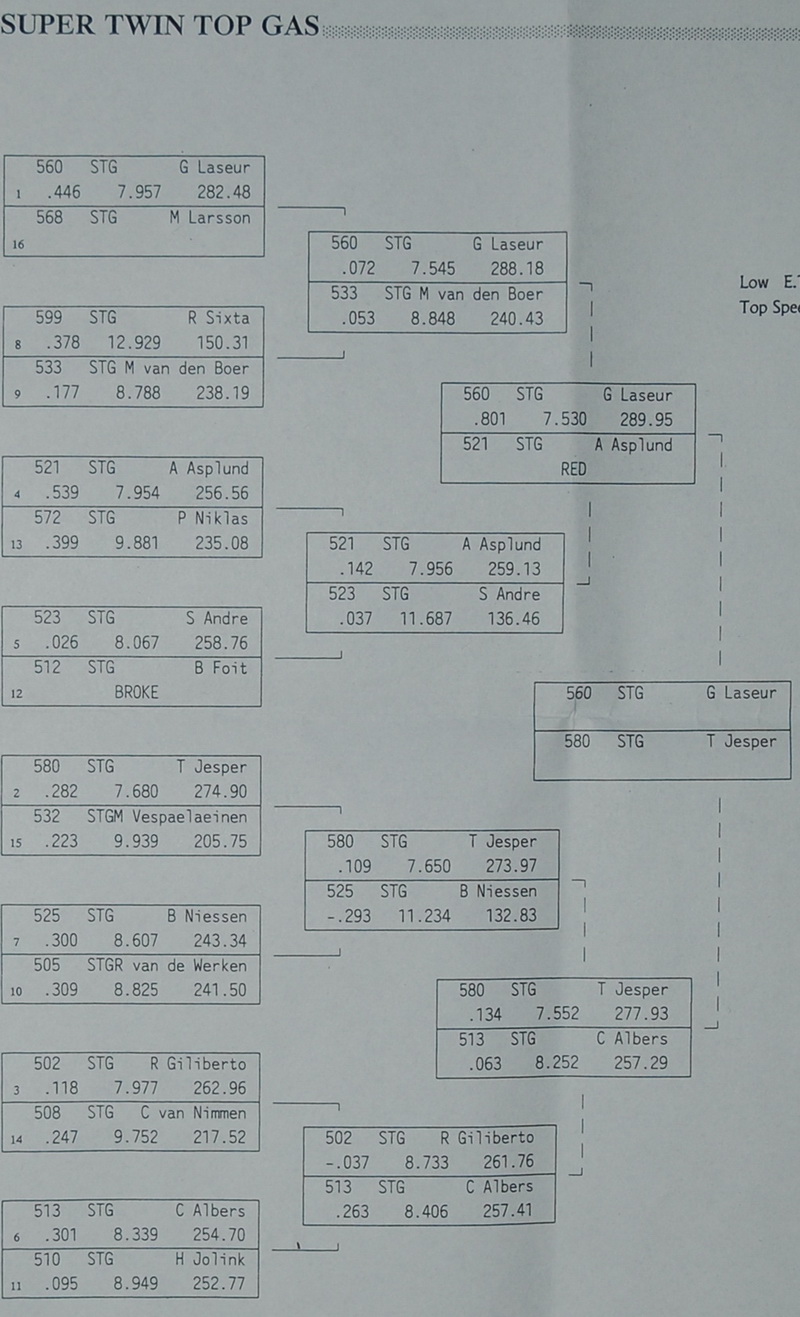 On Saturday evening at 19.20 sixteen topgassers lined up. The grandstands were jampacked with spectators, the nightshow was due to take place at eight o'clock. Gert-jan Laseur had no competition in his first round. Second pair Roman Sixta burnt his clutch... 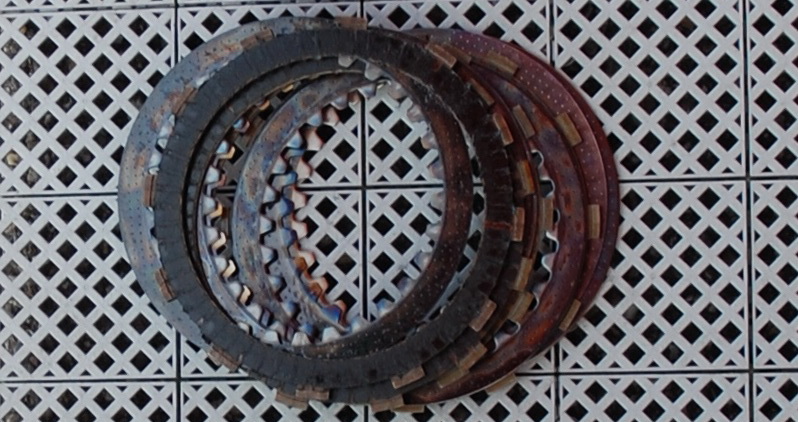 ... while MarcVandeboer ran another 8.7. and could prepair for sundays quarter finals and Laseur. 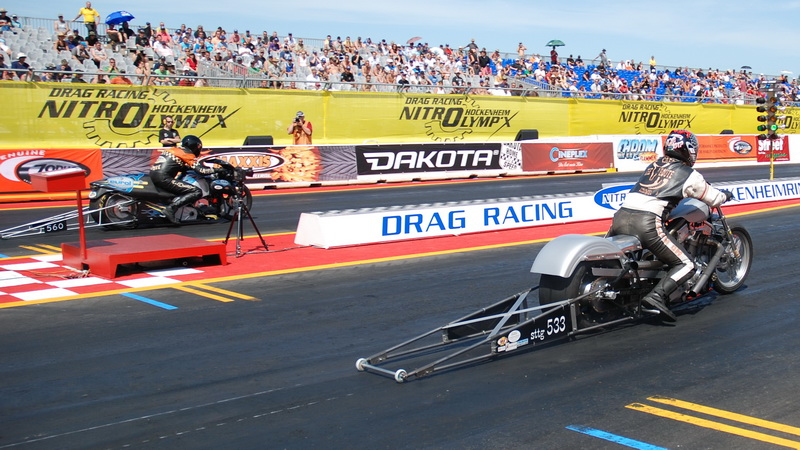 Roman packed on saturday evening to go put the repaired crank in his fueler and head for Kunmadars. 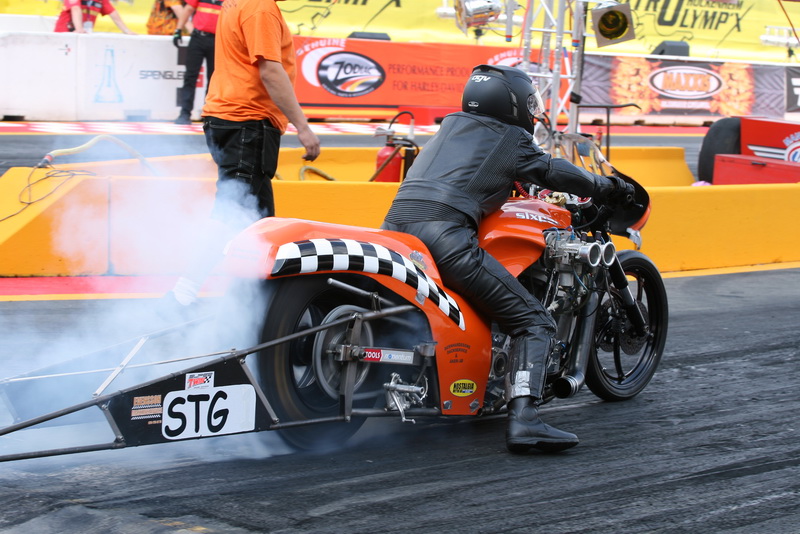 While crewing for Herman I could not see the scoreboard form the line-up. But I saw some dancing Swedish guys jumping around and hugging each other. I wondered why the team of Anna Lena Asplund was so extremely happy to beat Peter Niklas, it was no supprise to me. But it turned out she did her first ever seven second pass . Many congratulations started coming in on her mobile phone for her from people back home in Sweden who were following the live couverage of the event by eurodragster. A crew member who stayed at home was very happy and sad at the same time. As soon as I found out, I also congratulated her, and dared to ask her to back it up. 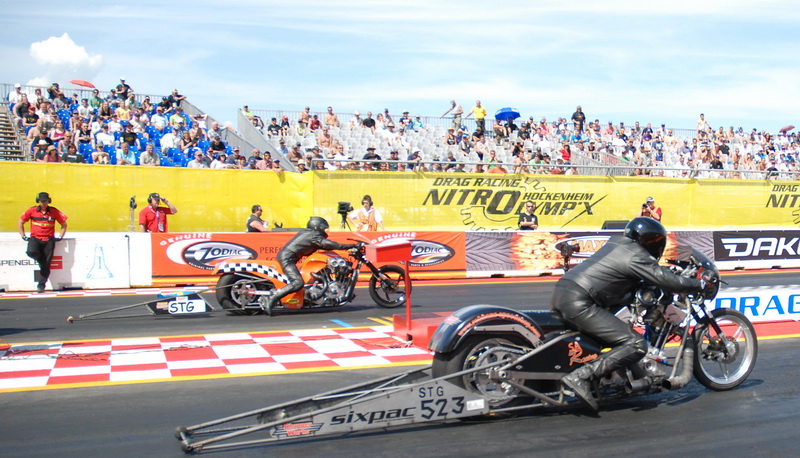 And so she did the next morning, and took out Stefan Andre, who specializes in 8.0's combined with great reaction times. Anna Lena tried to stay cool, but was too hot to produce a third 7 sec pass and redlighted against Laseur instead. 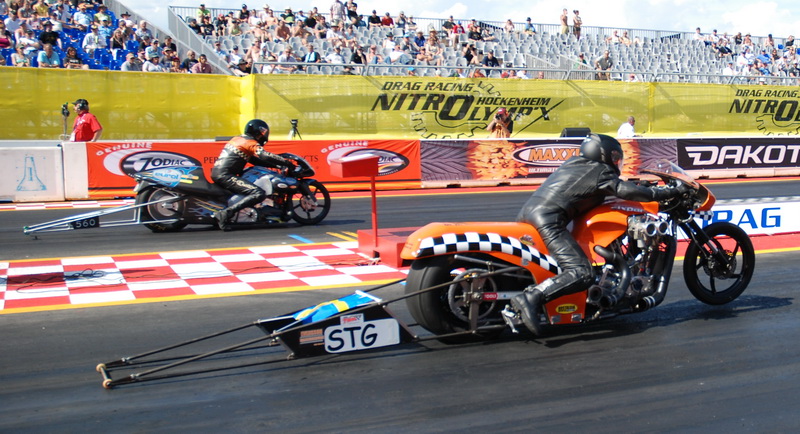 Jesper Thiel had no problem with Miia Maria Vespalainen. 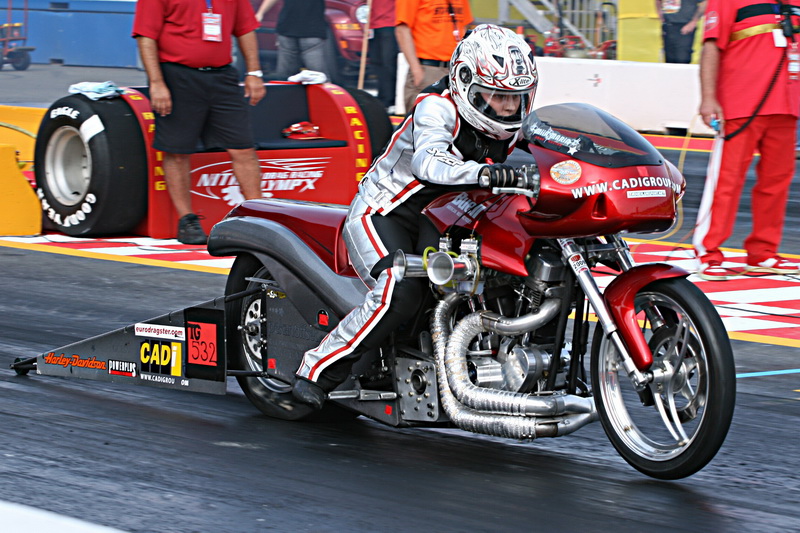 Fifth pair was close racing, "Shorty" Niesen had to fight like a lion to stay ahead of Roland van de Werken. 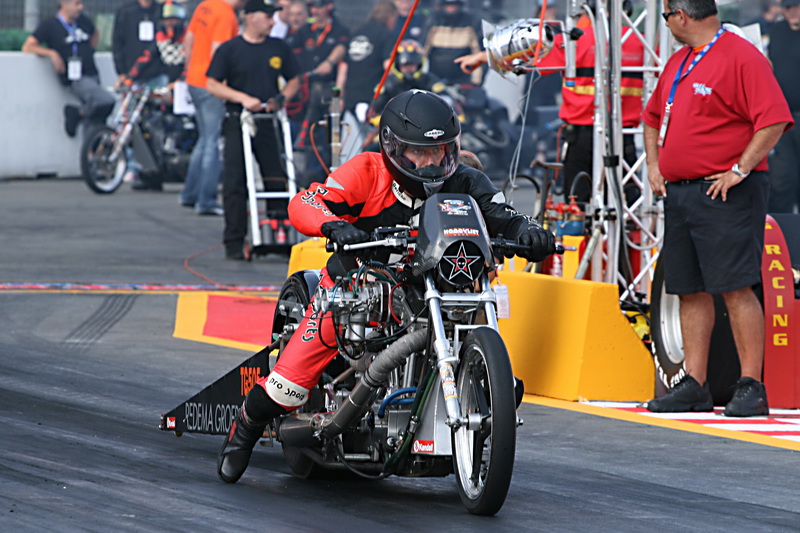 But Bernd lost controle in the quarter finals and redlighted. 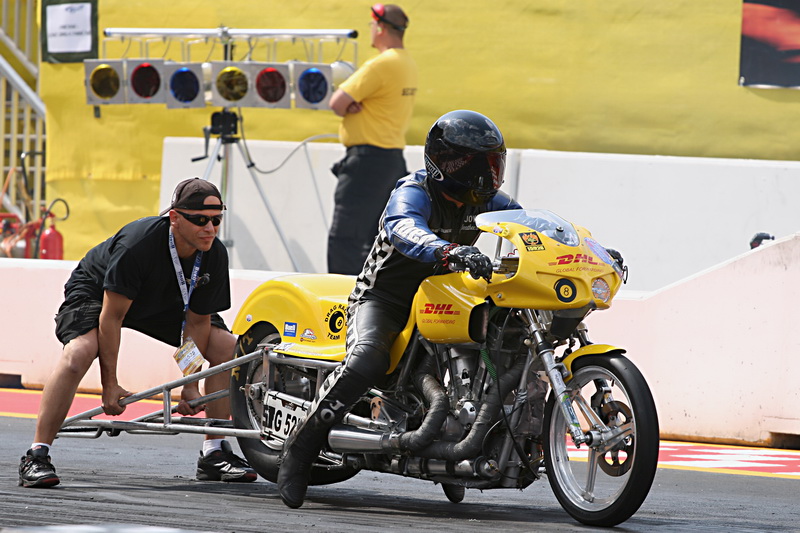 "The Flying Citrus" would have been eaten raw by Jesper Thiel anyway. 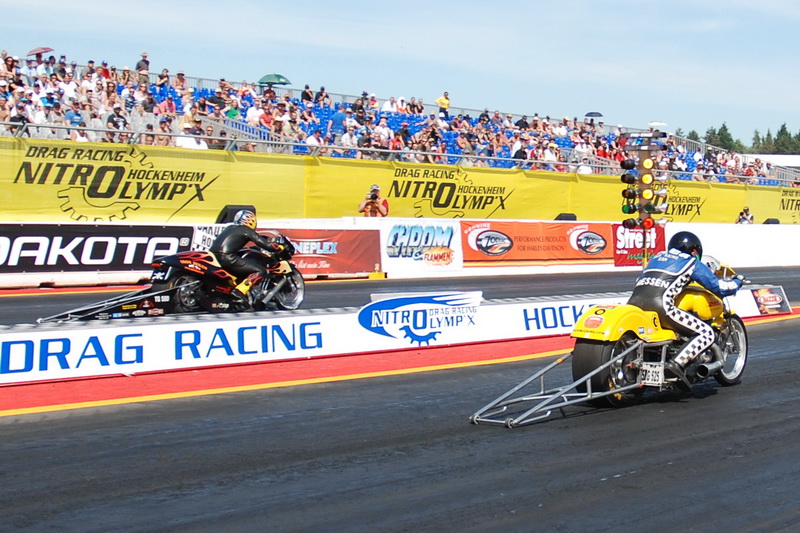 Now it tasted extra sour for Bernd, he damaged his gearbox. Could this be the "Vorentscheidung" in the championship? 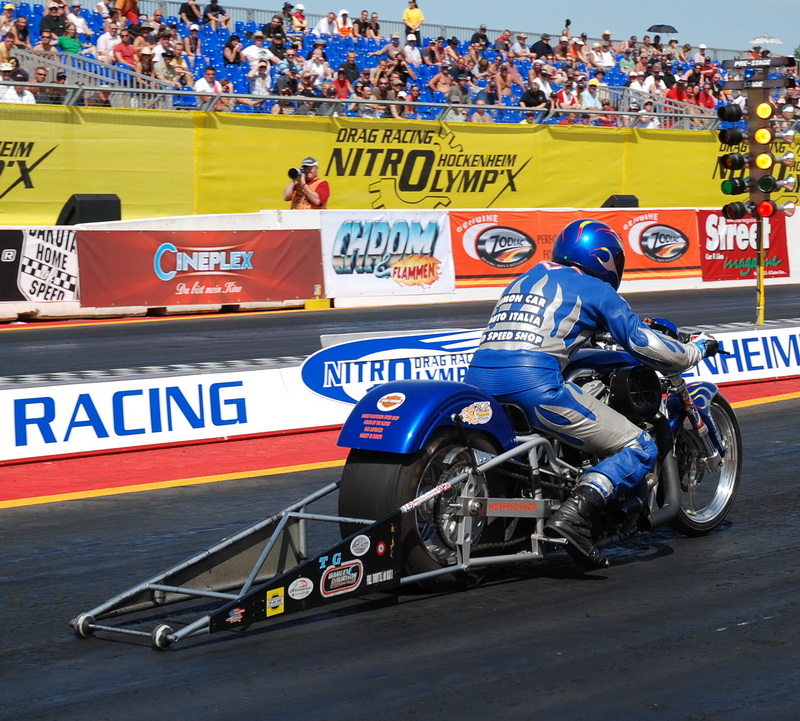 Ricardo did his second 7 second pass of the weekend agains Criss, but lost his nerves in the quarter finals.
With a very early start he eliminated himself while he could have beaten Albers. 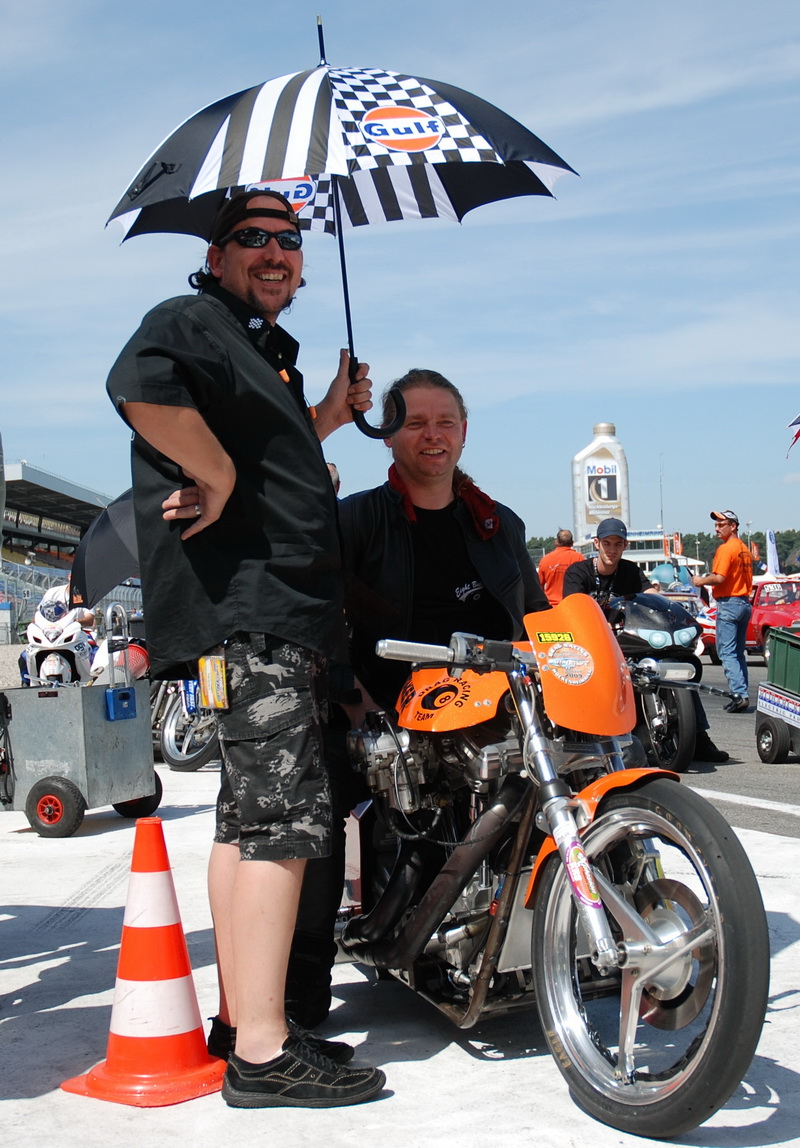 Cord Albers kept cool and always performs good in extremely hot conditions. His black leathers in the sun don't seem to heat him up too much. I've seen him do well in similar conditions in Luckau and Witstock.

Jesper always wears sunglasses, and proved to be a similar cool guy. Both rider produced their best run of the weekend while the sun was baking everybody. Both bikes look awesome, and as a pair they even look better. Not to mention the roaring sounds.

We had a different winner every race so far, and again this time in Hockenheim. 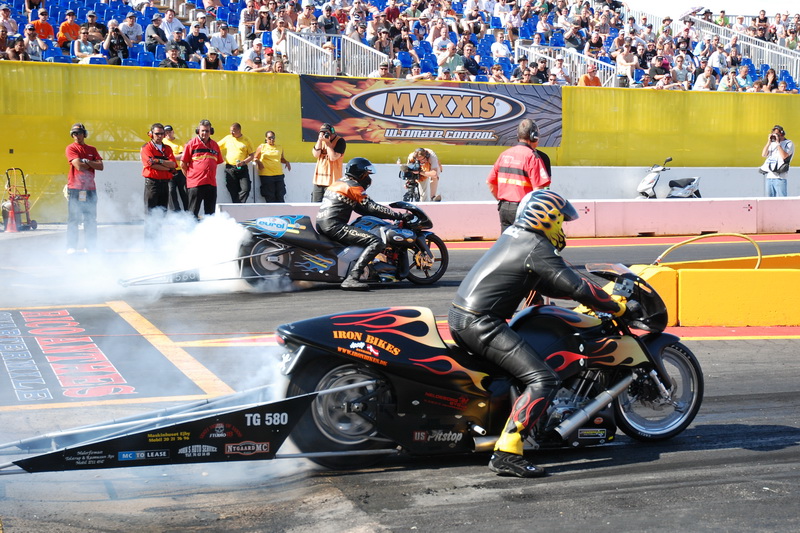 Gert-Jan Laseur is the next one to take the biggest trophy home.

The 298.5 kmh is a new personal best speed for Gert-jan, I think, but his quickest pass so far (7.3) was in Drachten.
This race was decided in the semi's where Gert-jan also won lanechoice (by 0.02 seconds), I dare to say.
I've seen superstreet bikes and topfuel dragsters go up in smoke in the left lane half way down the track after a big oilspill clean up.
Jesper was first off the line, and ahead till half way. Then Gert-jan passed him and took the win.

It could have been a closer and quicker side by side race, if both lanes had been in excelent condition. 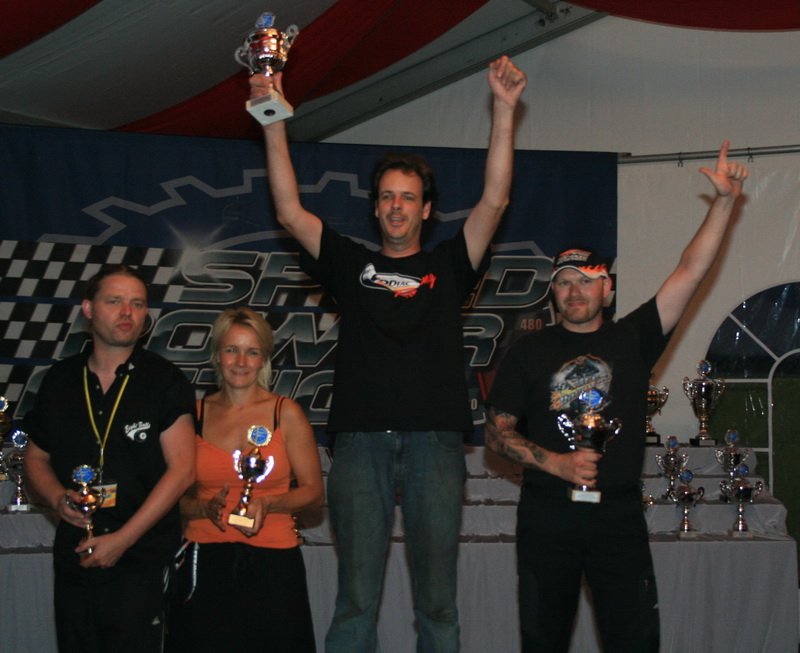 See what happens next week in Drachten.
Many thanks to Monika Sucha from Czech republic for the great pictures. 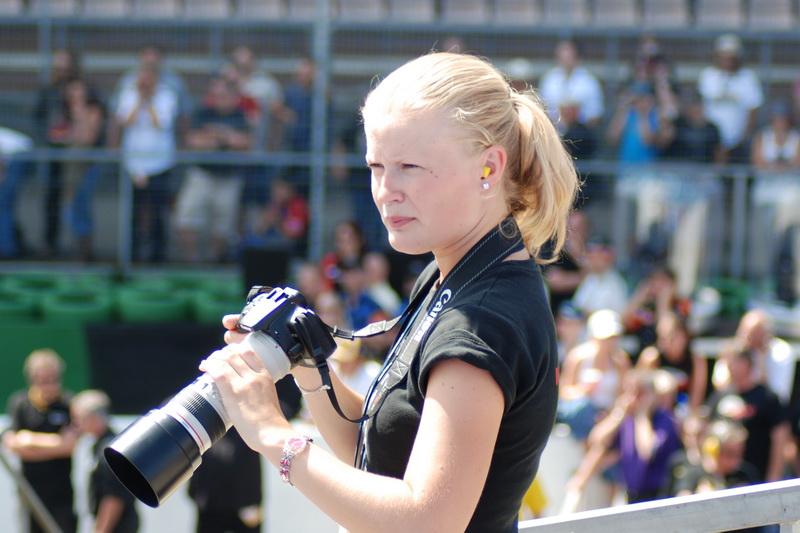