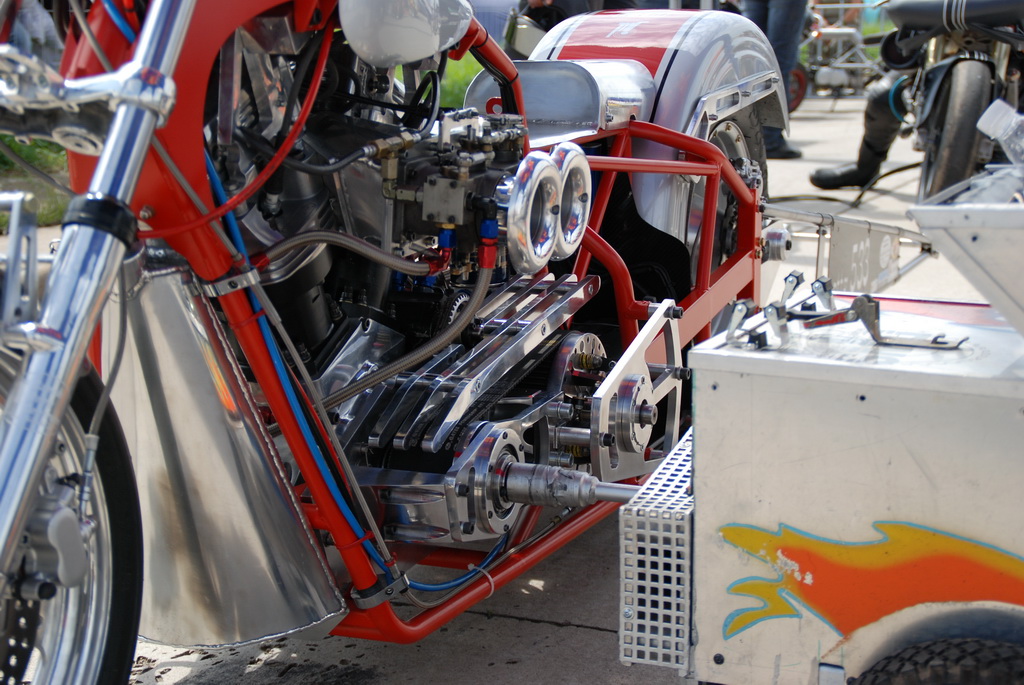 Driving on the German autobahn to get to the track we had a lot of rain. Some teams even had to deal with hail and snow, but as soon as I got to the track it cleared up and we were lucky all weekend.
We enjoyed a great race in a relaxed atmsphere. 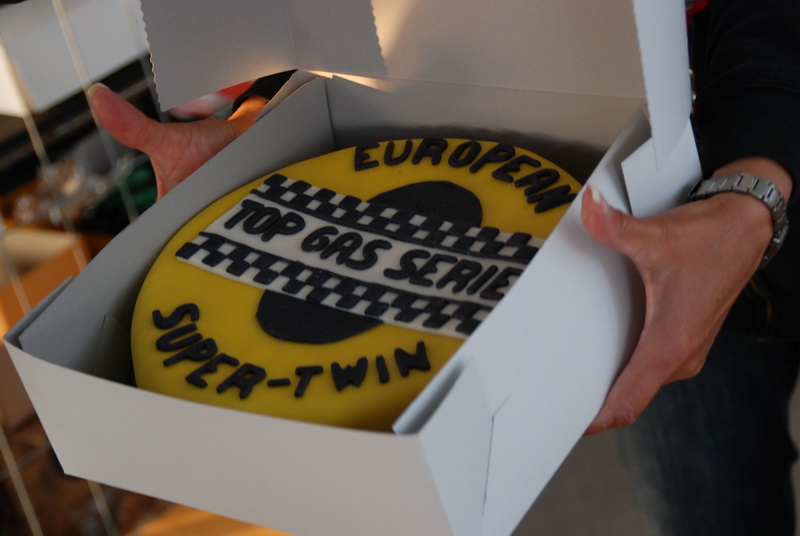 Yvona Kneblova and her crew made us feel very welcome, like every race in the past.
The "drag factory" was at full swing, assisted by Barons MC, and Mr Hutla with his timing equipment.
Otto Knebl also was racing his new funnybike in Competition class.

Team Herman Jolink was the first to arrive at the track. Herman worked hard last winter and he started the 2010 season with a highly tuned fresh Ducati 1198RS measuring 1266 cc and a re-enforced frame plus, of course, his never ending enthusiasm for the sport of drag bike racing. 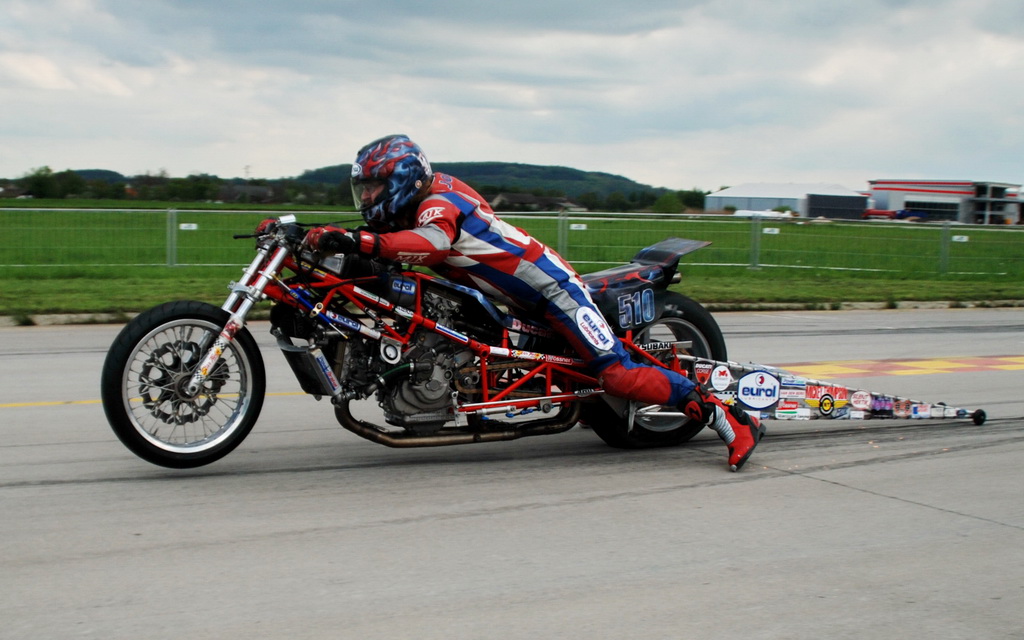 The bike had been updated last winter but Herman did not get the opportunity to try it out. So used the Friday afternoon to make two test runs. Racing conditions were good, the concrete track warmed up under the sun, and the air was fresh. The Ducati sounded very strong during the burnout and maybe even louder than the 999RS he raced in recent years. The bike went straight, the stiffer frame has stopped the fishtailing and Herman felt there was a lot of extra power in it.

On Saturday morning, the timing equipment was set up, and confirmed the feeling. Herman qualified #1 after the first round of qualifying and he stayed on top of the list of tough competitors all day. 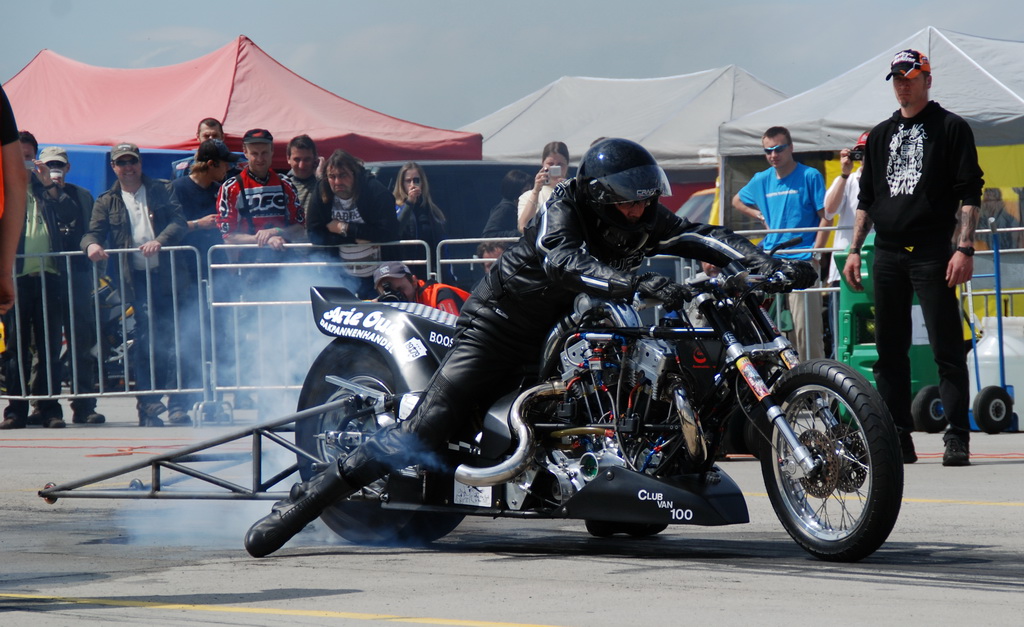 Harry van Schie came closest with his ex-Job Heezen supercharged Harley .
Team Full Throttle But checked the bike by turning the cranck, and they felt there was something wrong in the valve train.
The sprocket that drives the four cams was missing a tooth! 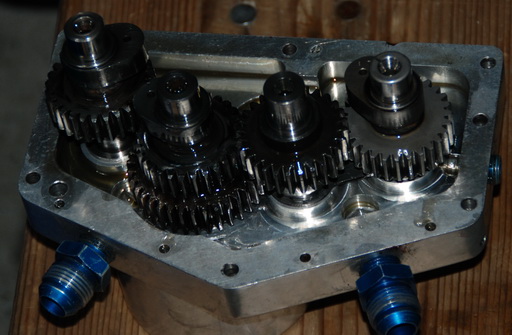 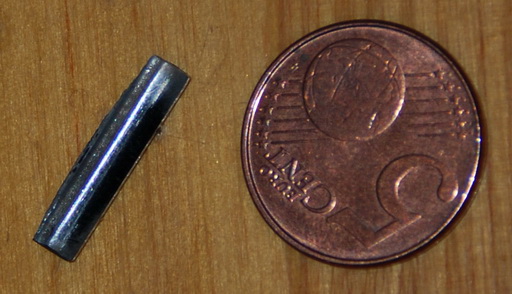 The team had to search hard for it, but found it hiding behind the oil pump with no further harm done. 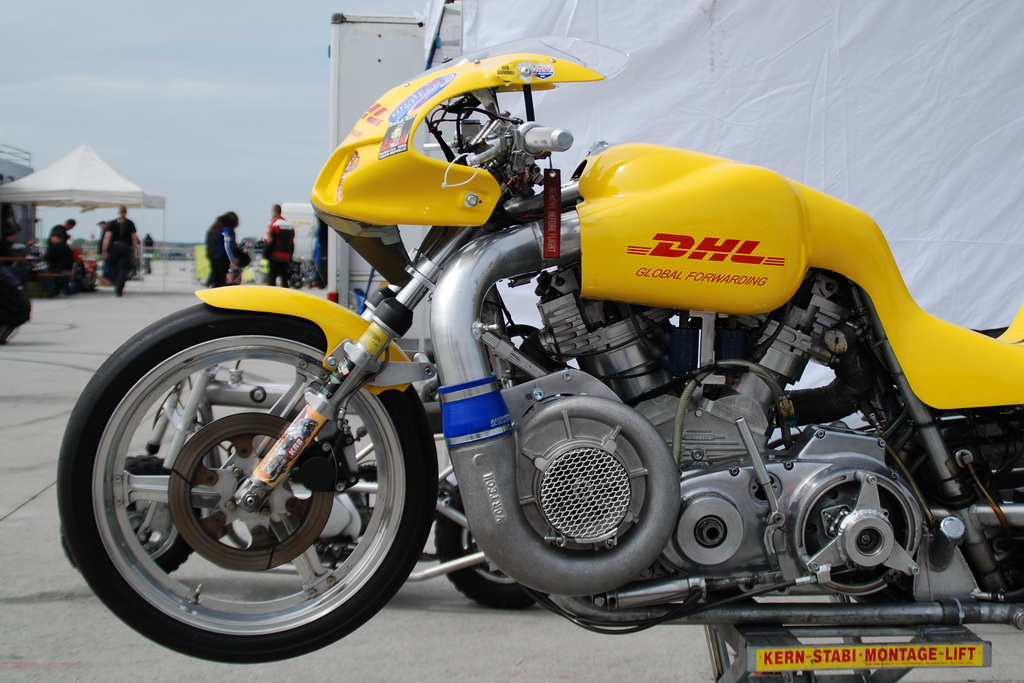 With the help of Cord Albers he added a big supercharger to squeeze some more horses out of the Buell. And it looks cool too. 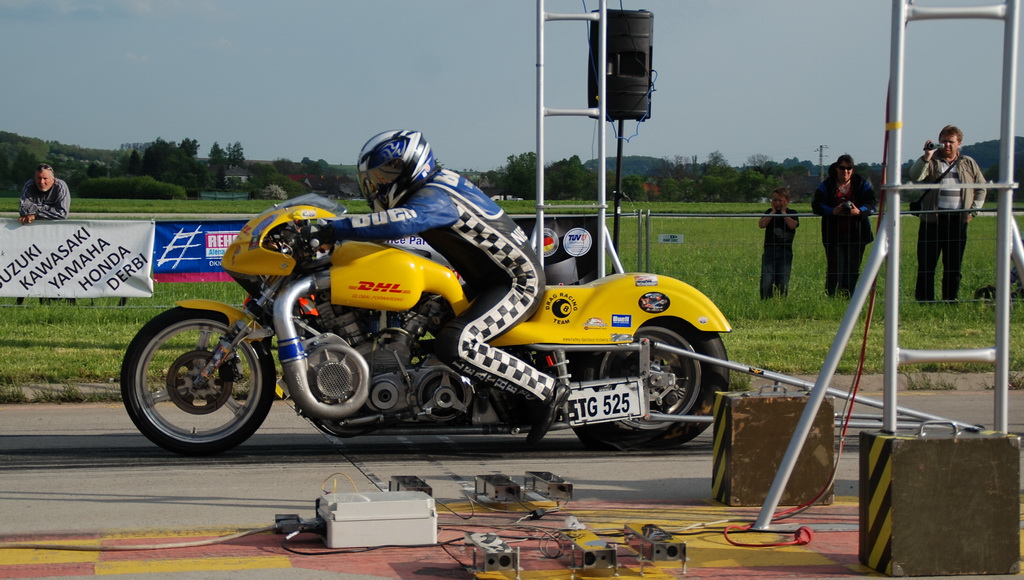 His mechanic Gerd Caspari found out on sunday how often he has to change the belt of the Vortech.

Marc Vandenboer also put a lot of work in his bike last winter. You can see a lot of home made parts on the first picture on this page.
The bike stayed in one piece all weekend, Marc got close to his personal best, and qualified #4.

Frank Heitmann was #3, but he only had one good pass all weekend, while working on his clutch and dealing with electrical problems. 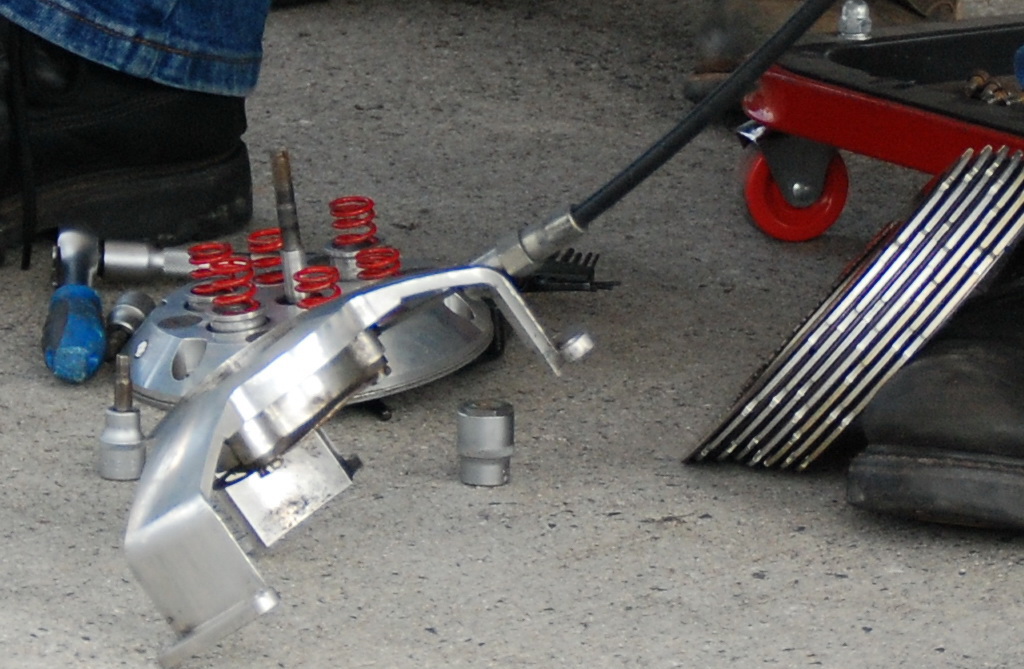 Too bad, his 0.03 reaction in the quarter finals shows the man was ready to kick some ass. 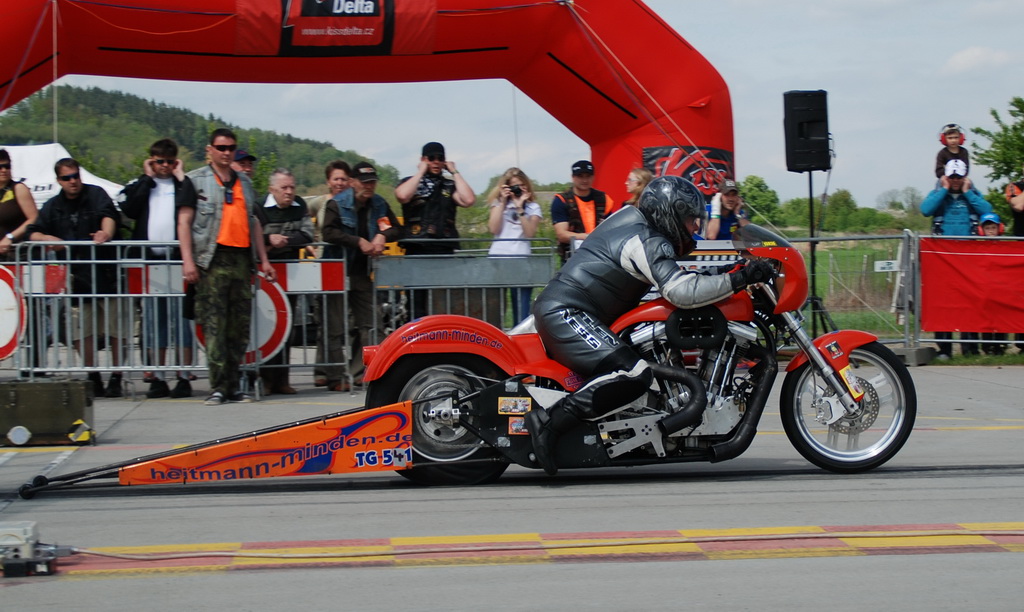 Two big changes at Peter Niklas' bike. The Honda has a new body and it would not run.
He did a 9.0 last year with it, now team Sideburns had problems. 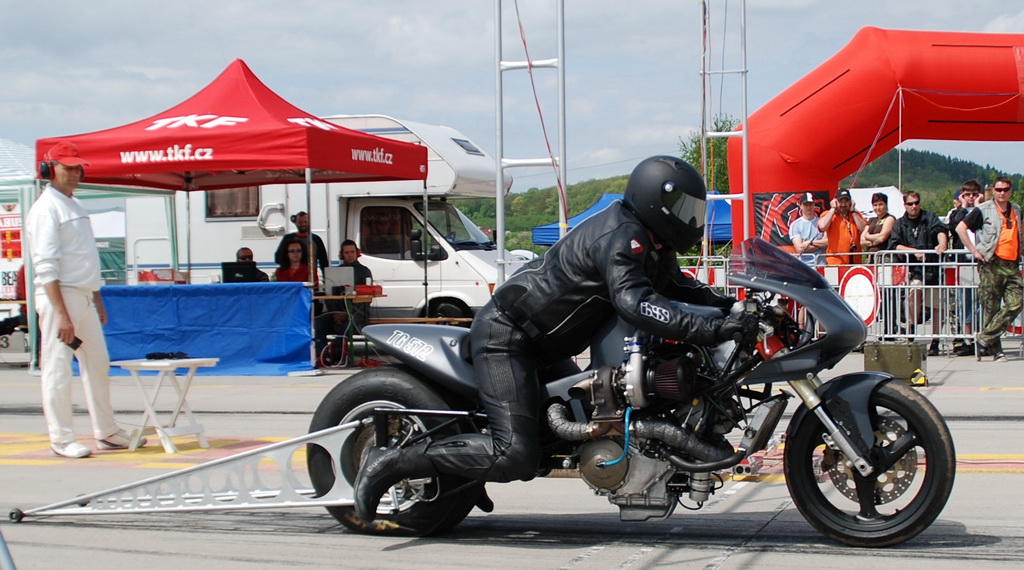 All attempts on saturday to get to the end of the track only got Peter to the 60 foot mark so he's not on this list: 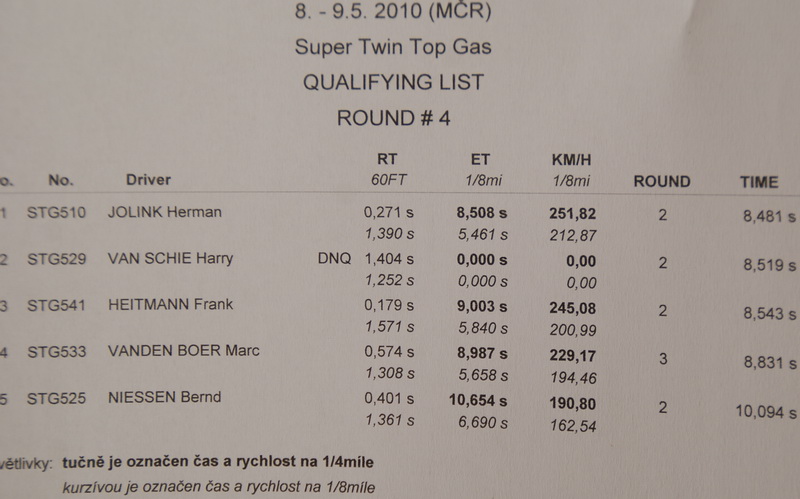 On sunday morning, a fifth round of qualifications was held, but the track was still cold so nobody was able to beat Jolink's time, thus Herman was the top qualifier for the drag race. Peter Niklas managed to cruise to the end of the track, so he was in the race that afternoon. 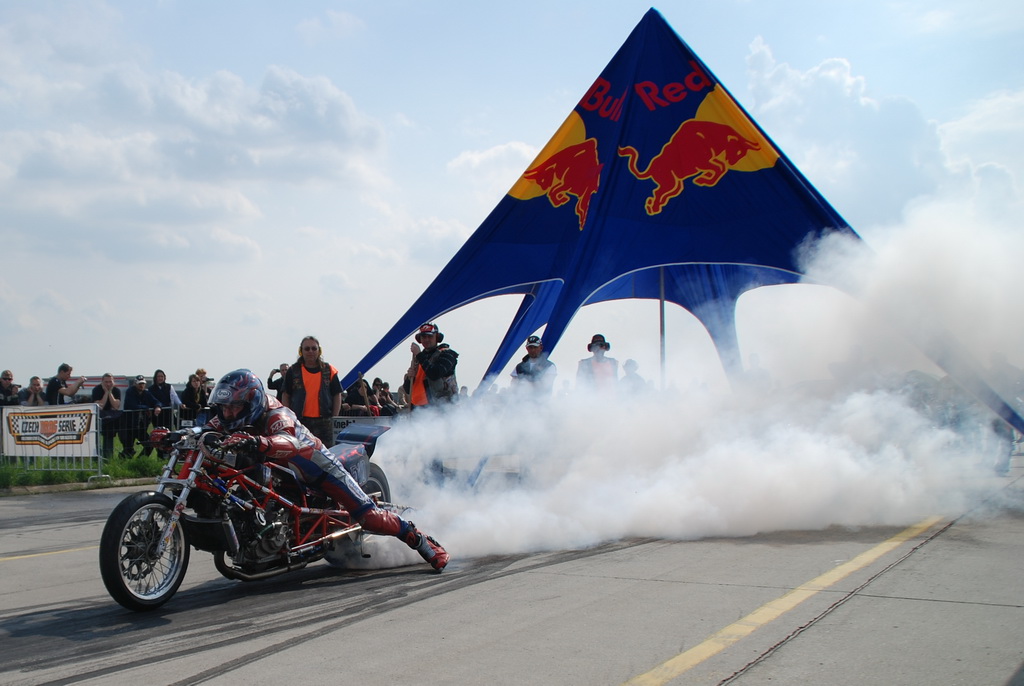 Before an enthusiastic audience of "dragster ultra fans", Herman took a big bite off his personal best times on the 1/4 and the 1/8 mile and also bettered his 1/8 mile speed record that afternoon.

Harry van Schie had an easy win in the quarter finals, 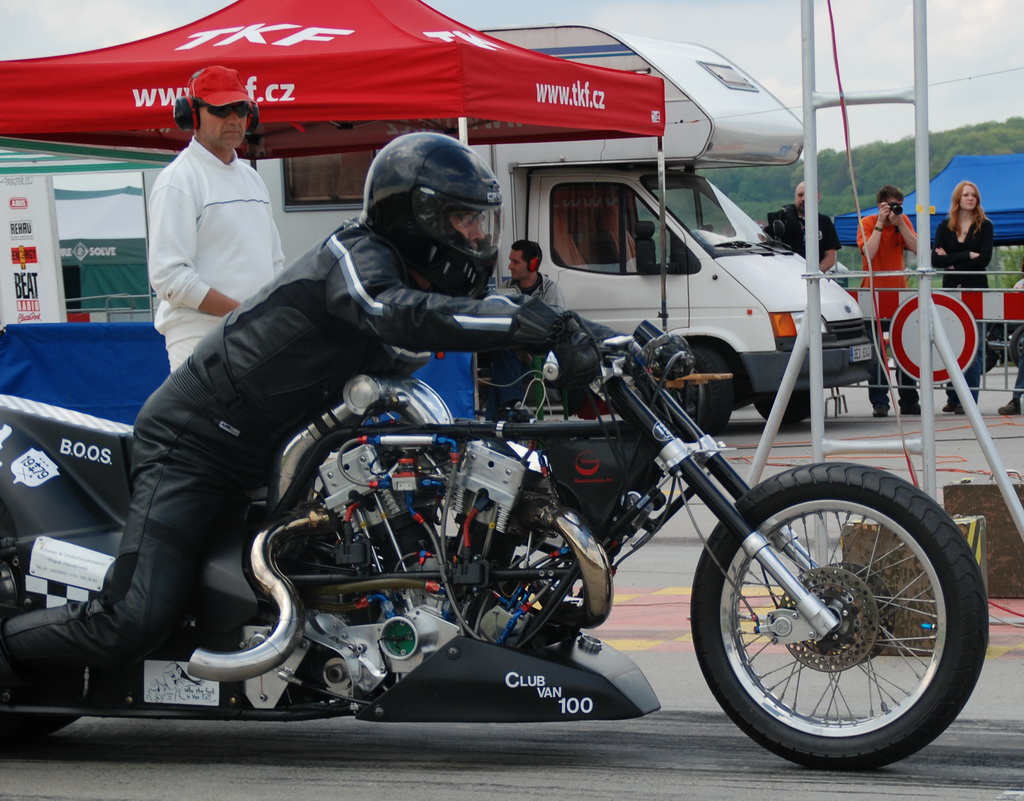 when Niessen's blower belt broke after the burnout. 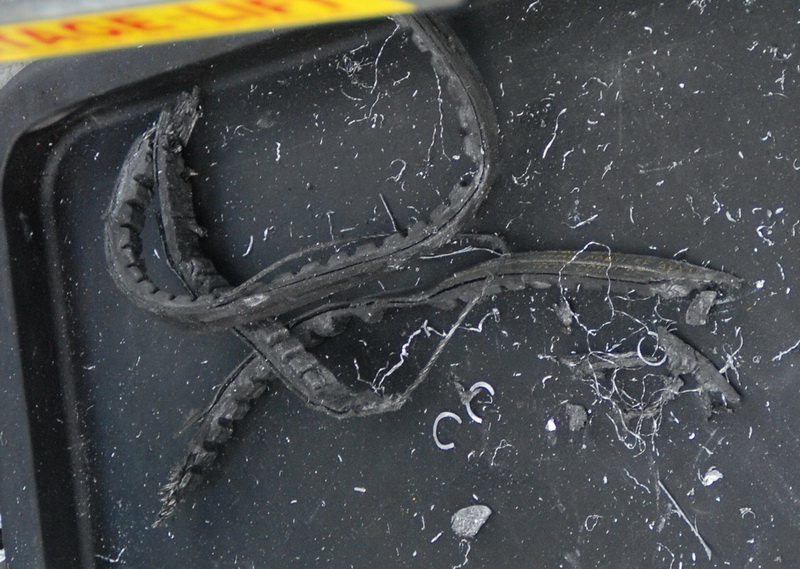 Marc Vandenboer took out Frank Heitman, so all Germans were eliminated in the first round. 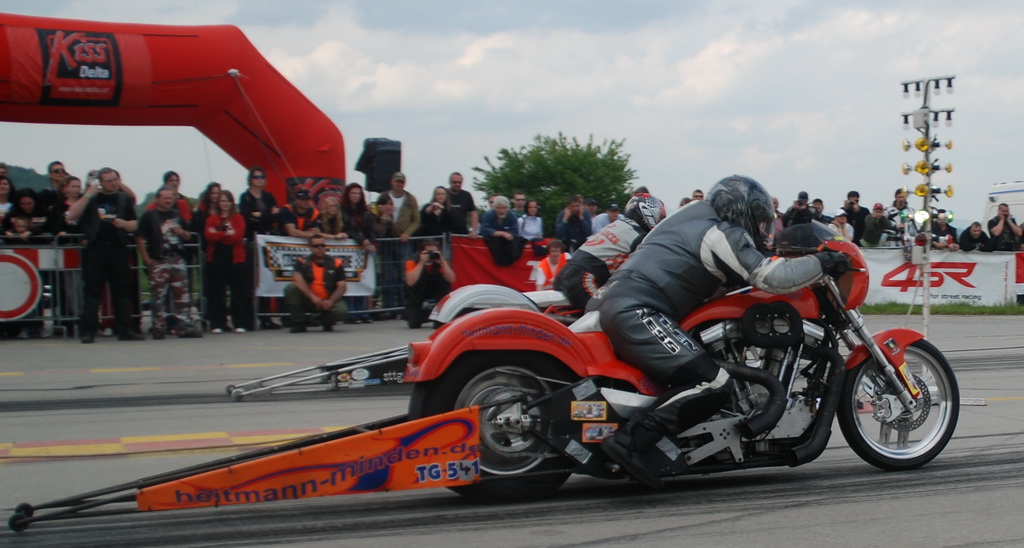 Harry van Schie did his best time of the weekend, 8.35 sec. in the semis, and that could have given him lane choice in the finals: 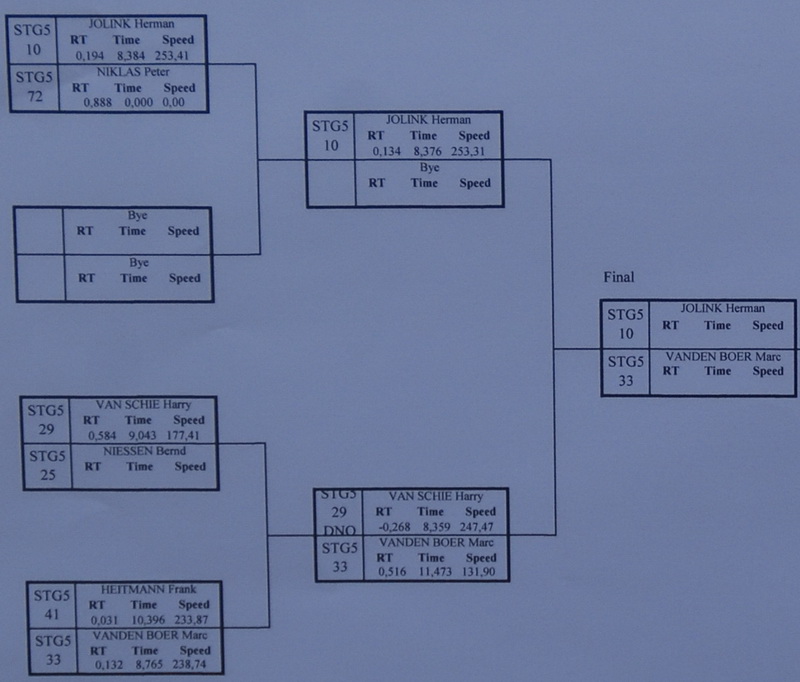 Consistency wins races, Herman Jolink proved that as he won the race with an 8.41, quick enough to beat Marc's Harley. 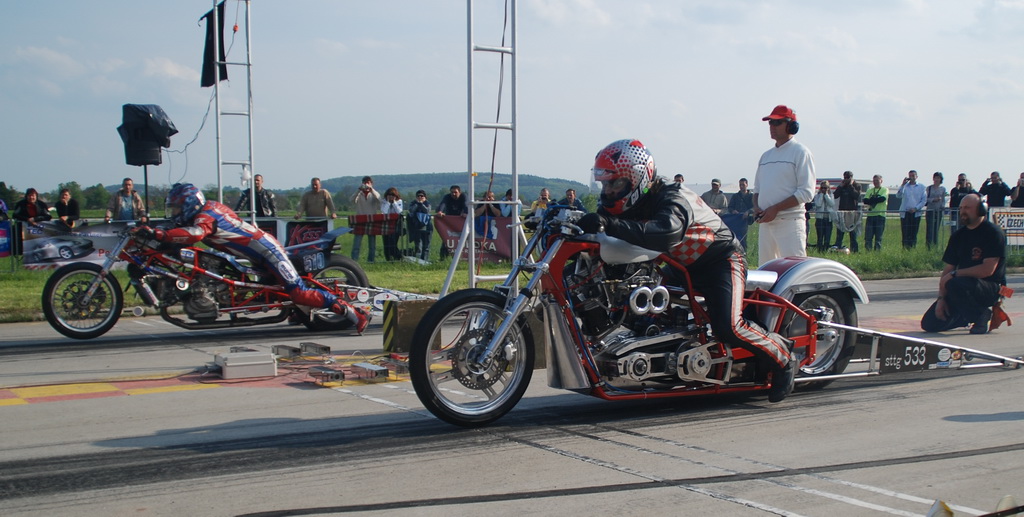 With six more races in the series, Herman feels very confident about his drag bike. There must be a lot more in it because he did not use the sixth gear all weekend! 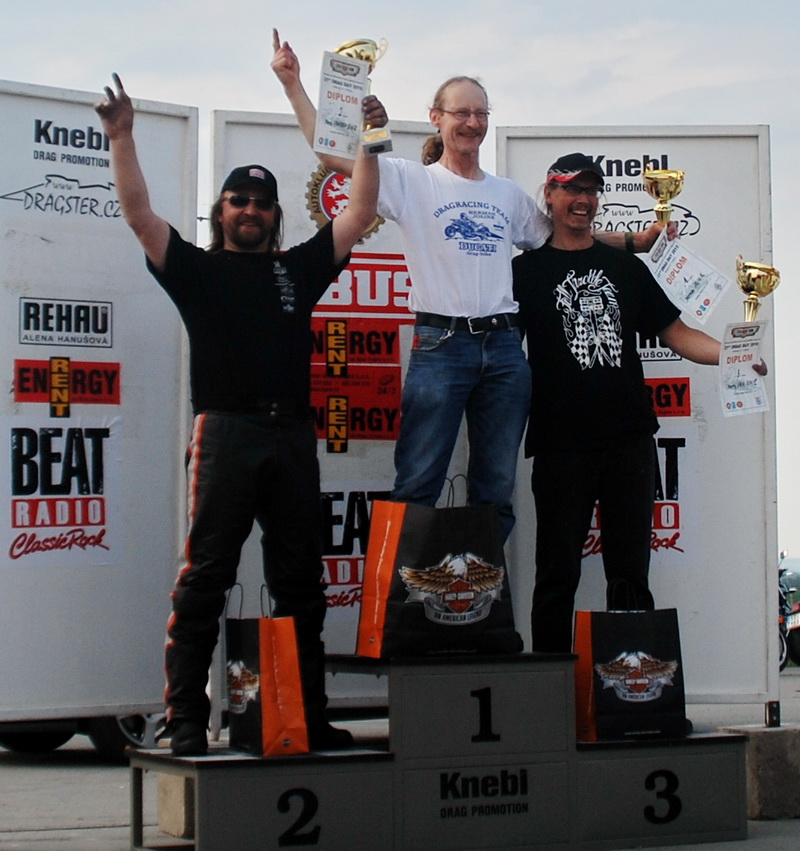 Watch the picture gallery of this event.

Hope to see you all soon in Drachten. 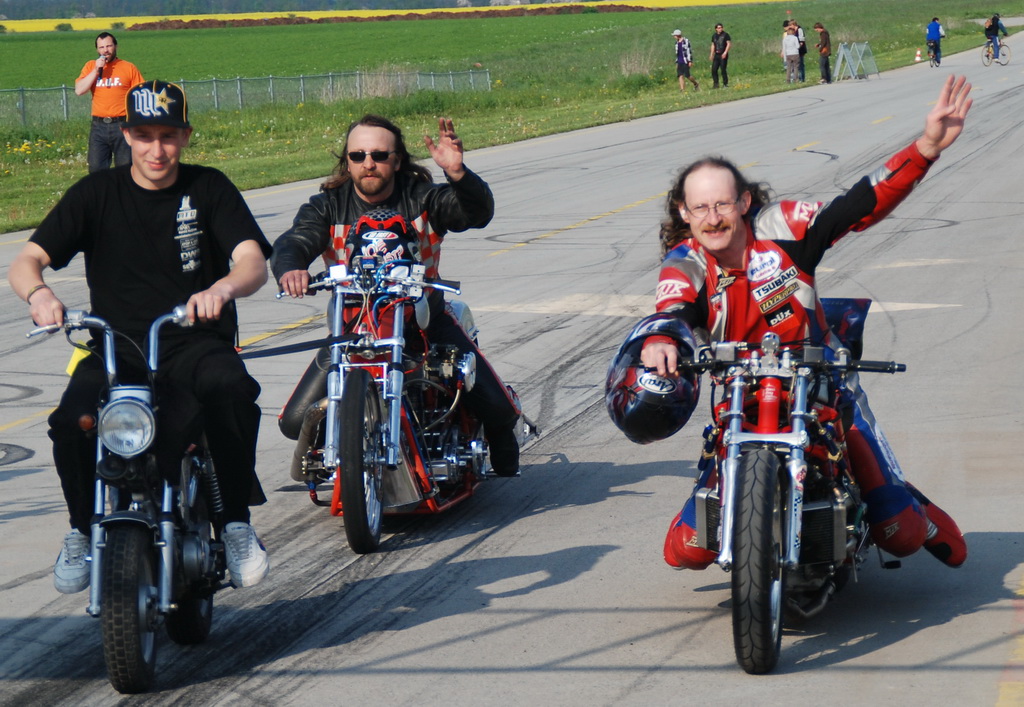