Round two of the Euro serie. 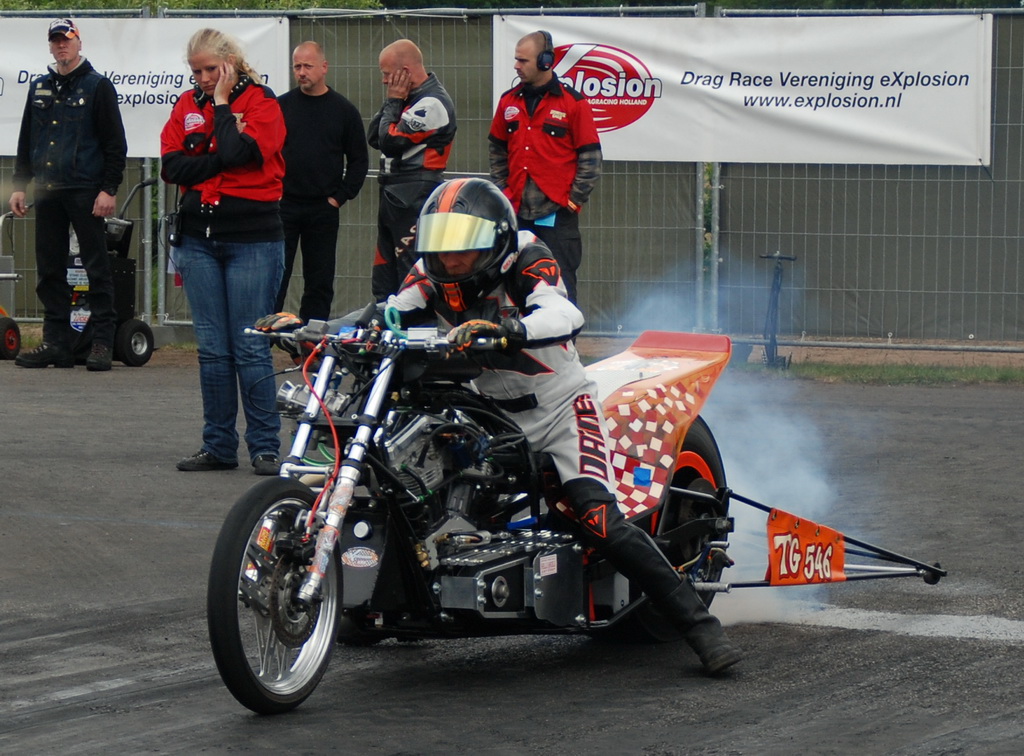 Driving to Drachten on thursday evening it was still nice, clear and sunny.
But a strong northern wind caused the weather to change, and on friday morning it was cold, cloudy and some occasional drizzle caused frequent pauses in the qualifications and eliminations. Fortunately a complete drag race was held on sunday afternoon., with even an extra round of qualifications in the morning. The crew of eXplosion worked their asses off to make good racing possible. 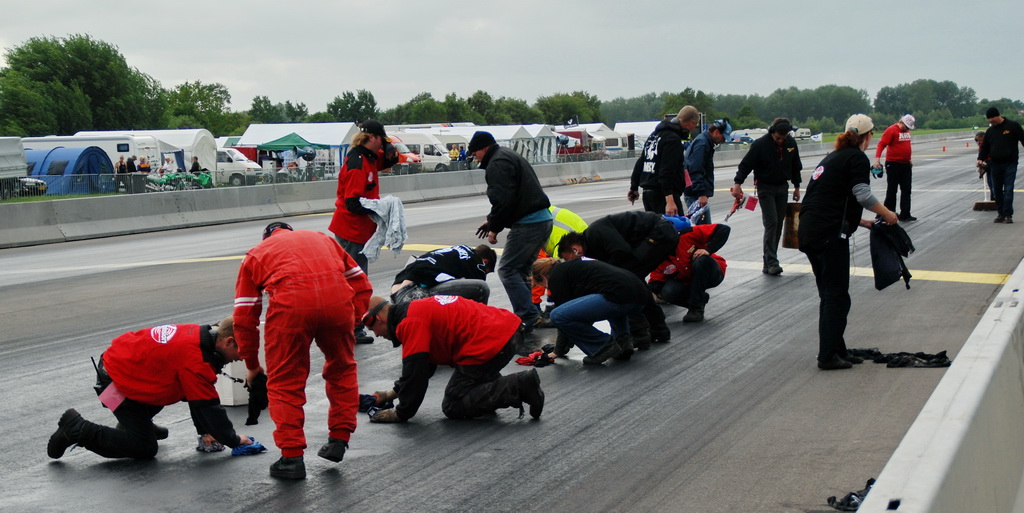 The track was in excellent condition right from the start, and a great job was done keeping it that way all the way into the finals.

Seven racers were present to compete in the Supertwin Topgas class. 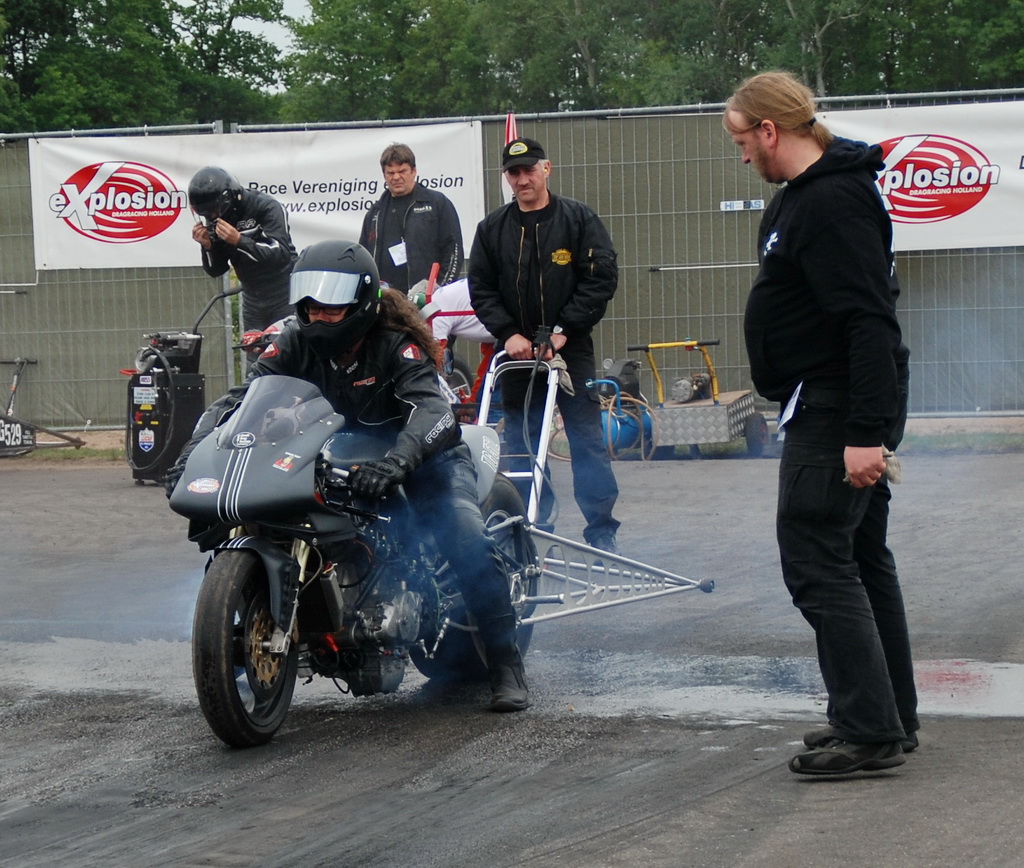 Peter Niklas was the first to arrive and the first to go home. During his first burnout an early detonation caused the home made manifold to explode. Many hours of work destroyed in a few seconds. 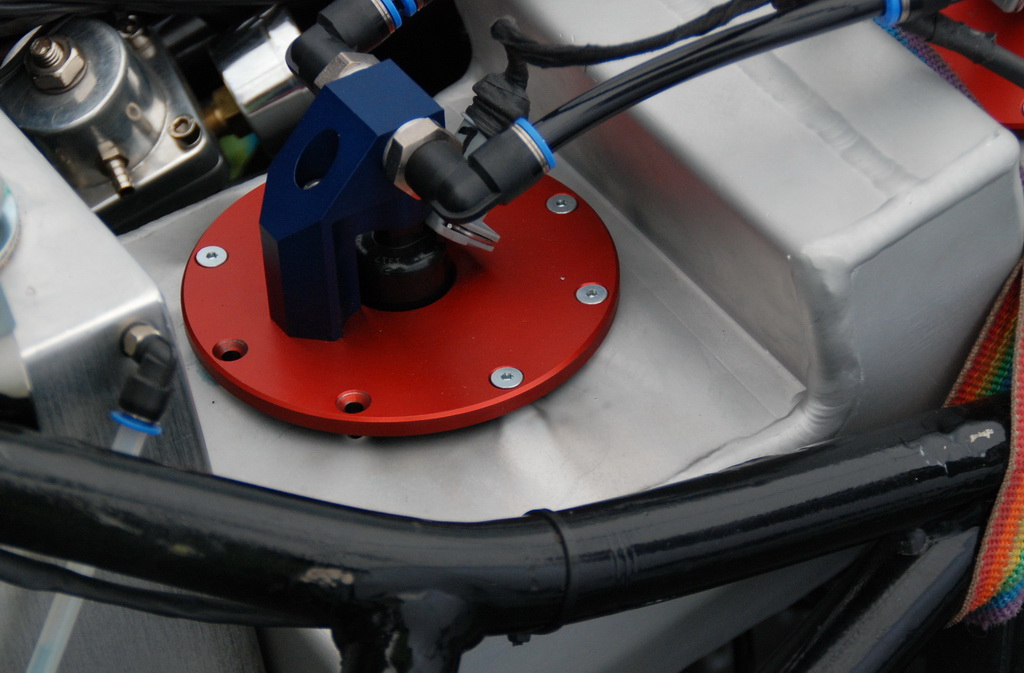 So they packed in the turbo charged Honda and left on saturday.

So Frank Heitmann had to defend the German honour on his own. He arrived late friday afternoon, so he started qualifying on saturday.
So he only had two attempts while the others had four. Frank had the spare parts with him that were badly needed by Ludo Scheepers.
The Belgian racer (top picture) also wasted friday caused by ignition problems.

Racer Roland van de Werken was crewing for a friend. Medical problems kept him from getting a race license, and his topgas bike is now for sale. Here he breaks the news to Frank Heitmann. 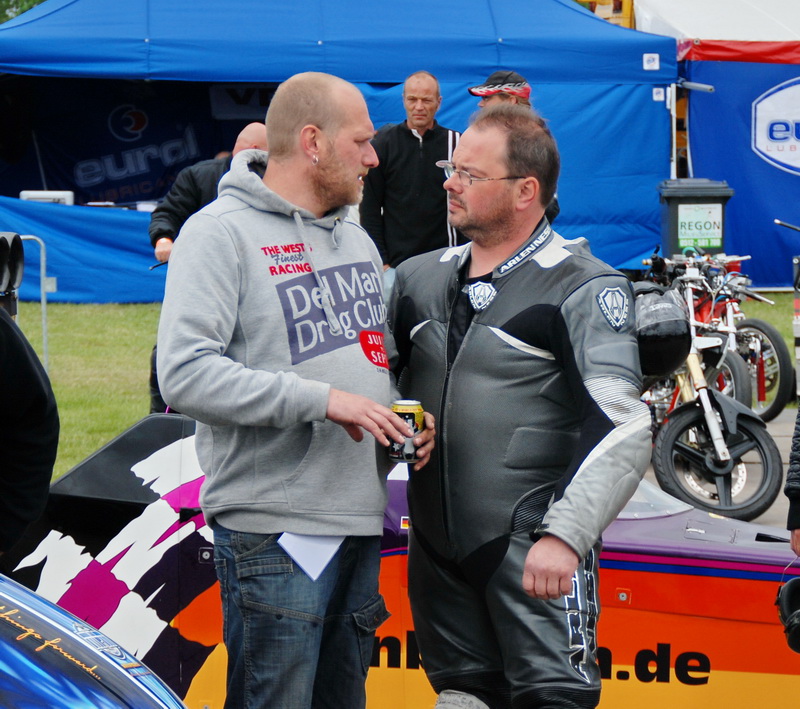 With only six racers left, the battle for top of the qualification list was fierce. The reward would be the weakest opponent in the quarter finals and a bye run in the semis. 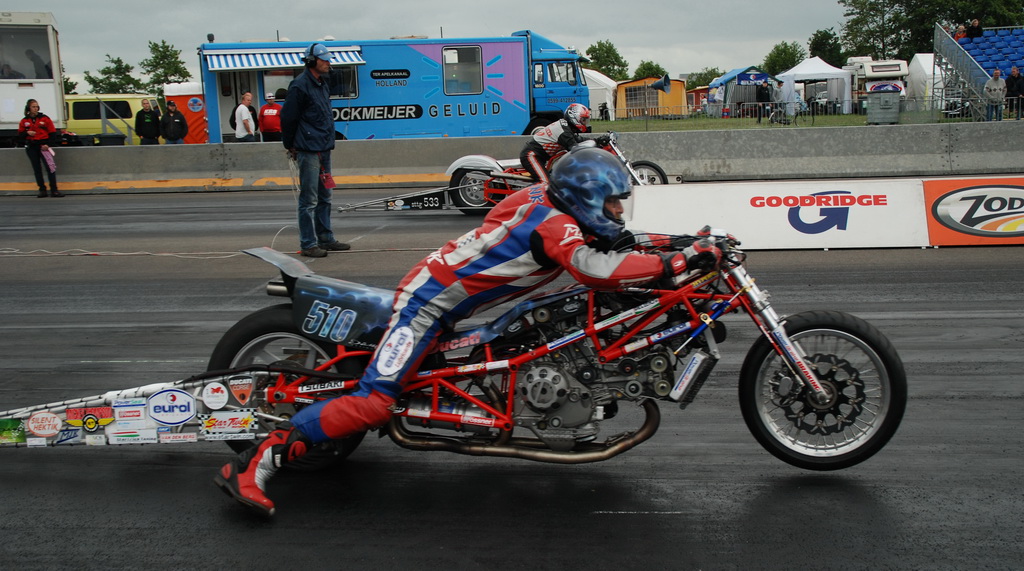 The same situation as we had last race, and again Herman Jolink was on top of the list after the first two rounds on friday.

Fellow Dutch racer Harry van Schie was once again chasing Herman, and he has an engine about twice the size of Jolinks's Ducati.
Supported by a supercharger, the ex-Heezen Harley is probably the most powerfull bike running in our class at the moment.
it's also a very compicated bike, that needs lots of maintainance. Mechanic Jaap is always busy with it, and even his sons often help a hand.
Saturday was the worst day of the weekend, with only one qualification held. Harry used it well, and got on top of the list. 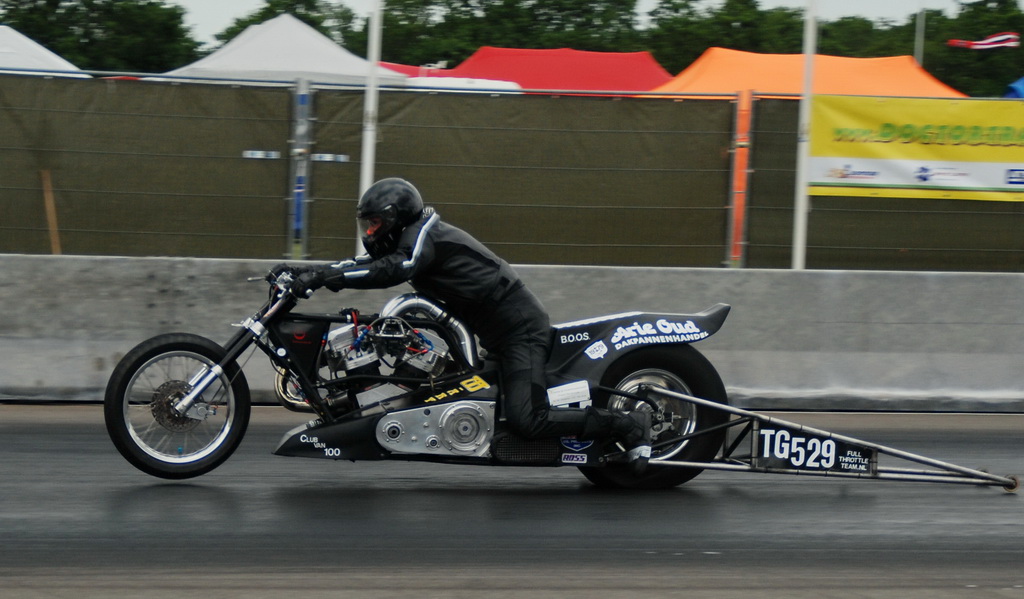 Even with the unpredictable weather, the organisation of the event had strong nerves and held another round of qualifications on sunday morning. Three guys went quicker his time, but nobody moved positions.

A broken bolt caused the rear exhaust pipe to come loose at Harry's bike during the burnout. 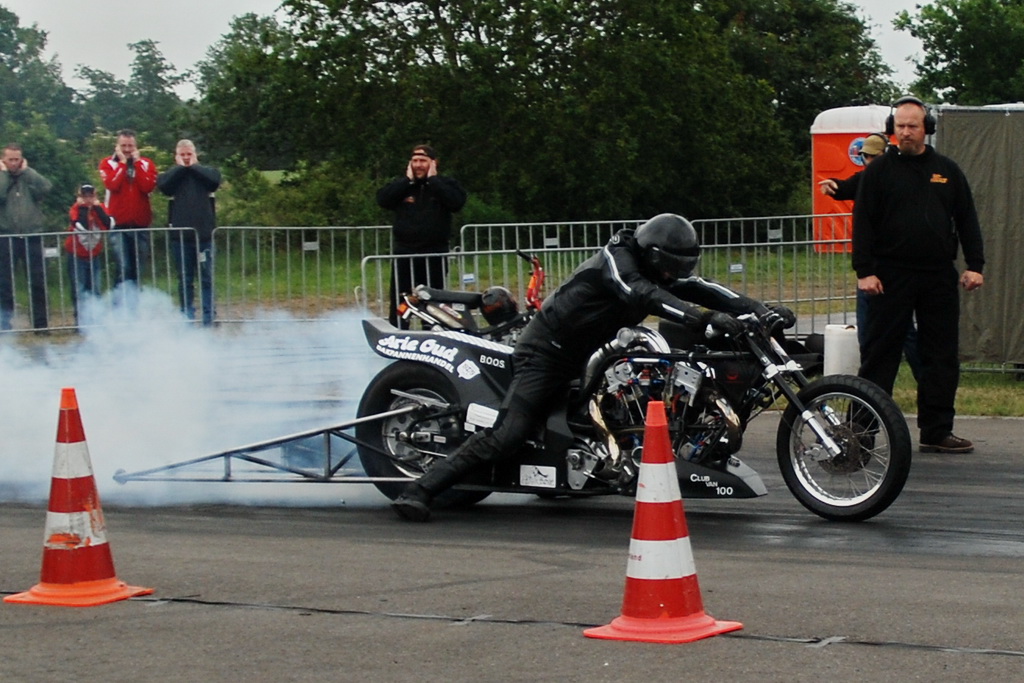 Good that he did not skip this last qualifying round, it could have caused him to lose the quarter finals. 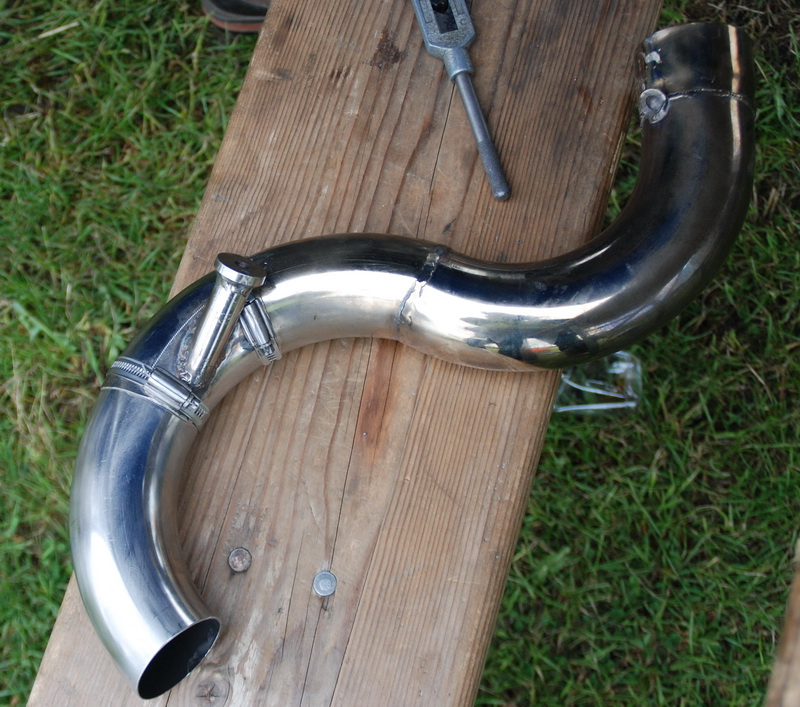 Some raindrops in between so the crew kept working on the track, and the jet engine that was used to dry it up also gave it a nice temperature before the quarter finals. 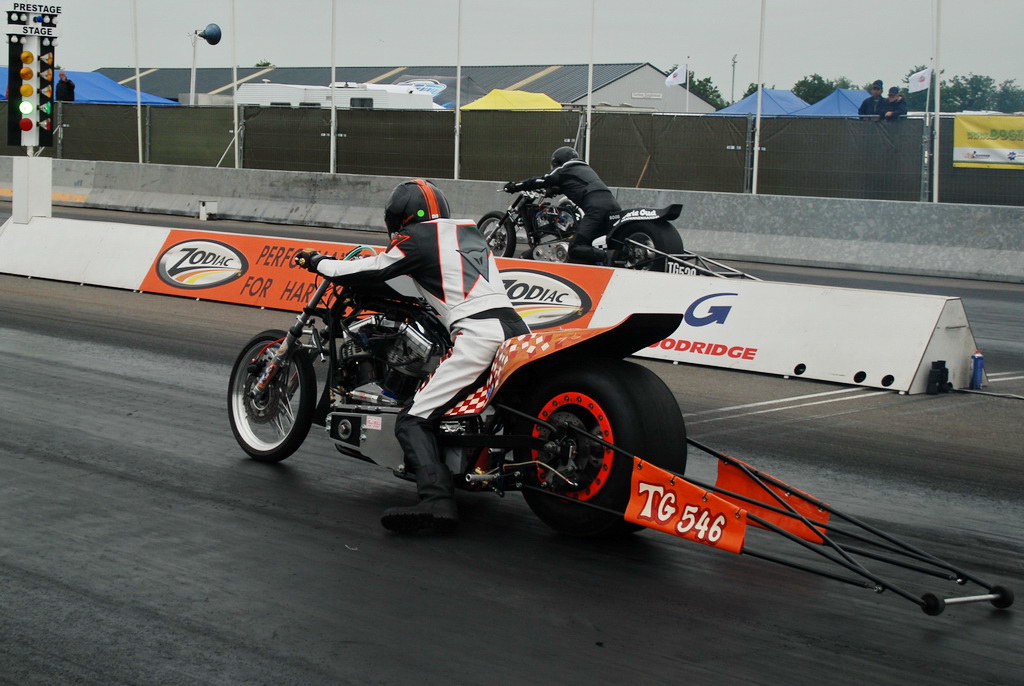 Harry van Schie ate Ludo Scheepers for lunch with an 8.417.

John van Geytenbeek reacted better but Herman Jolink was much too strong for him. 9.009 sec for John against 8.371 for Herman. 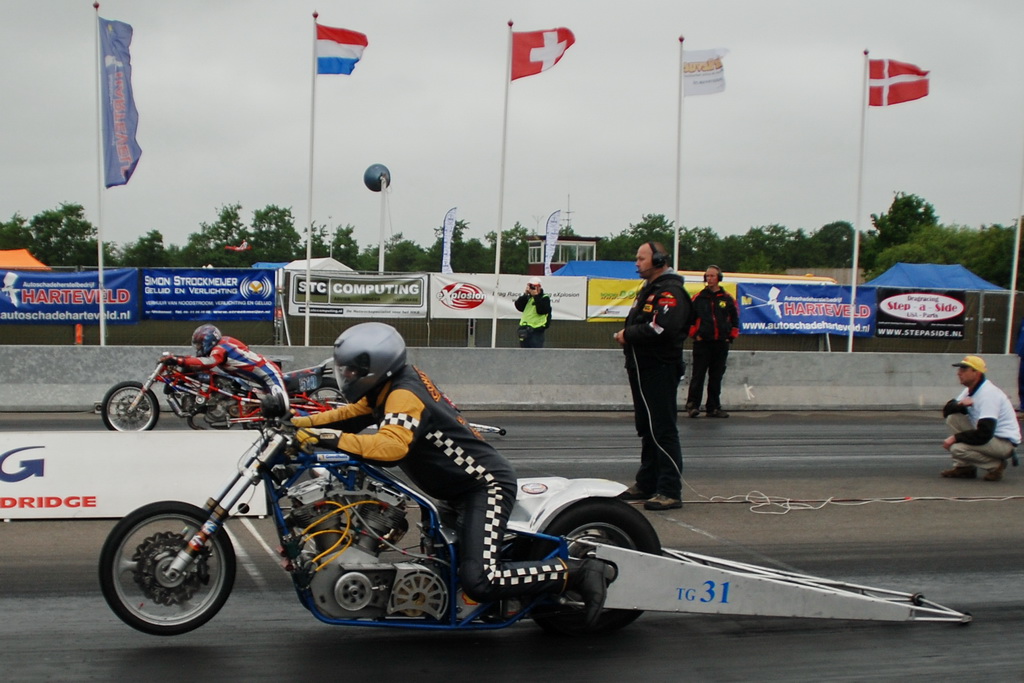 A new personal best for the Ducati was the result, just like at the last race. 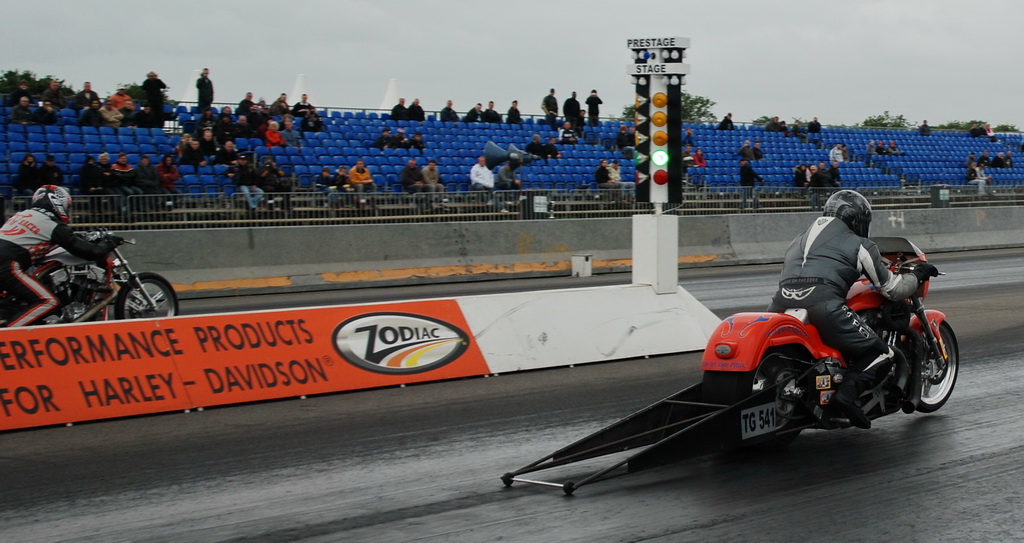 Frank Heitmann reacted very sharp against Marc van den Boer and won with an 8.418. So the remaining three riders did about equally quick times, it was going to be exciting. 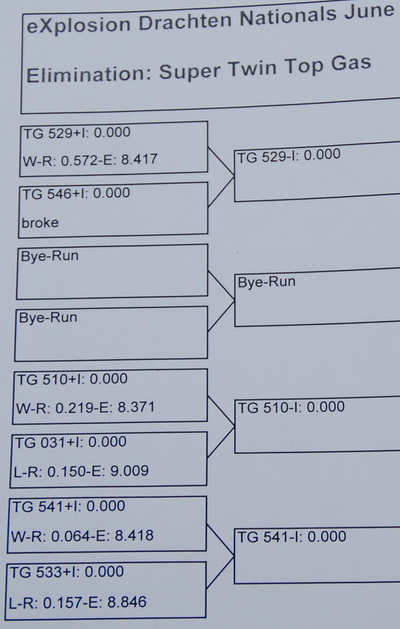 Harry's low top speed shows that there was more in the bike, and he used his bye-run in the semi finals to set the quickest time, 8.14sec. to make sure he got lane choice in the finals. Herman Jolink took a big bite off his personal best and beat Frank Heitmann. 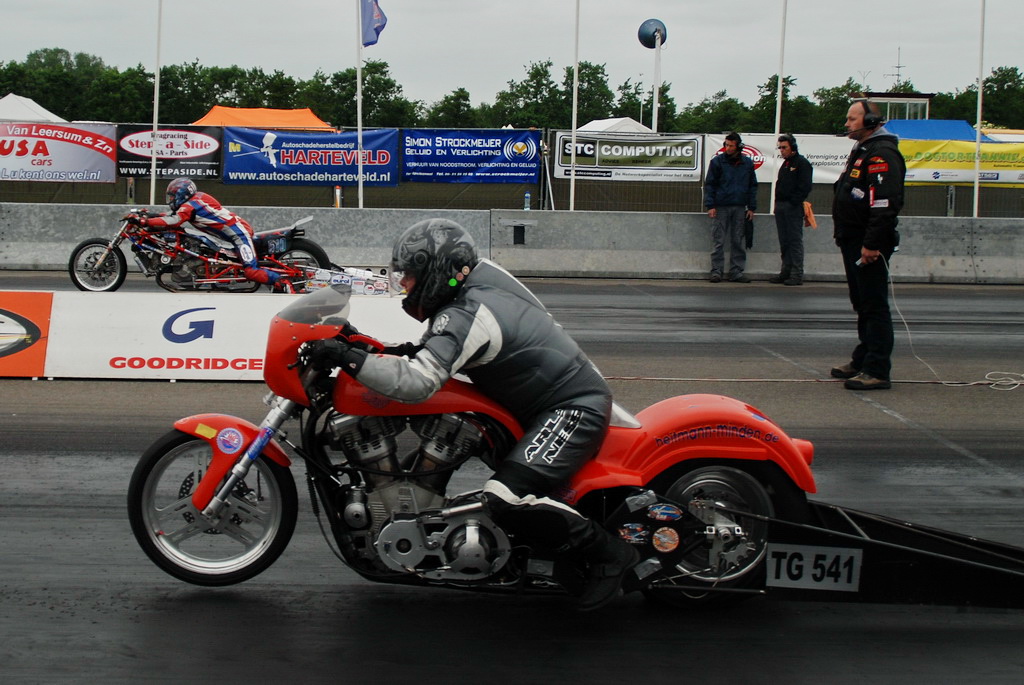 Jolink was in the lead from the start, and only needed 8.275 seconds to finish. 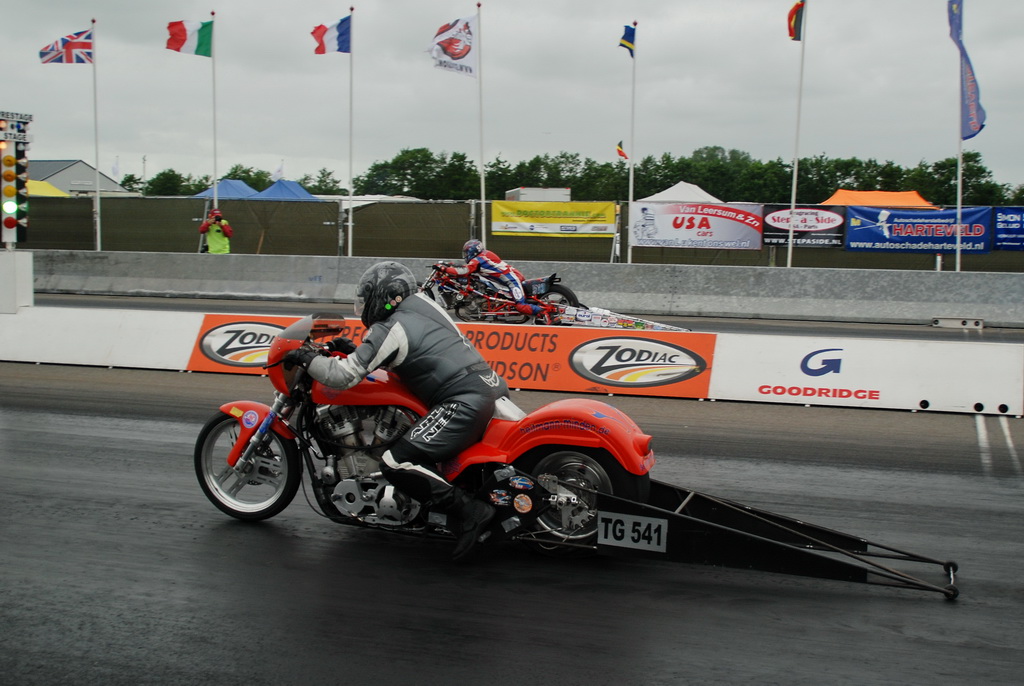 So an all Dutch finals. Herman's Ducati screamed at 12.000 rpm during the burnout, while Harry's Harley produced a deep growling roar. 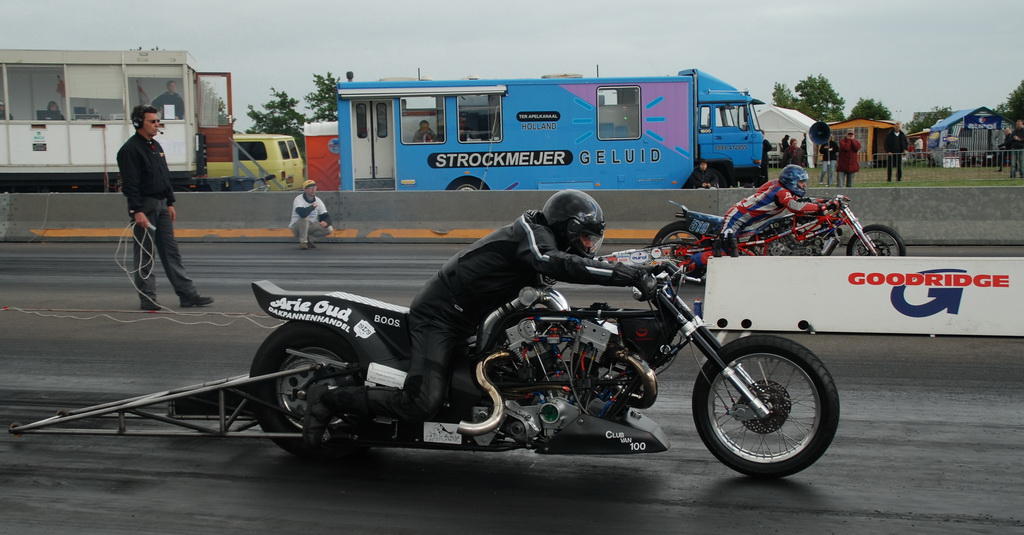 Herman played it well at the tree, Harry's bike hessitaded shortly, just after the green light came on. 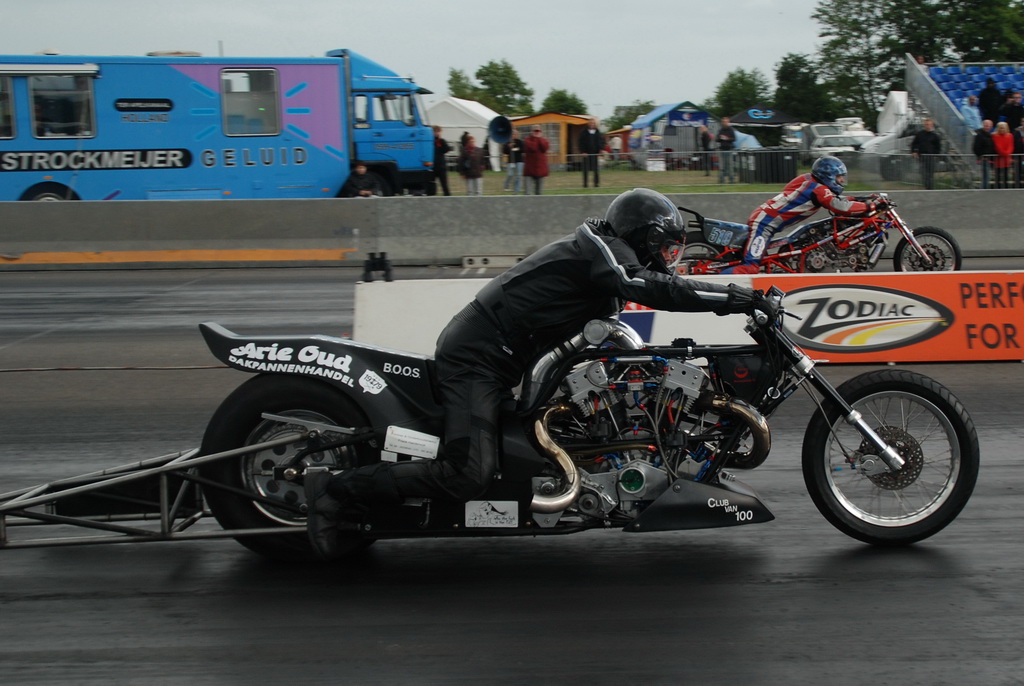 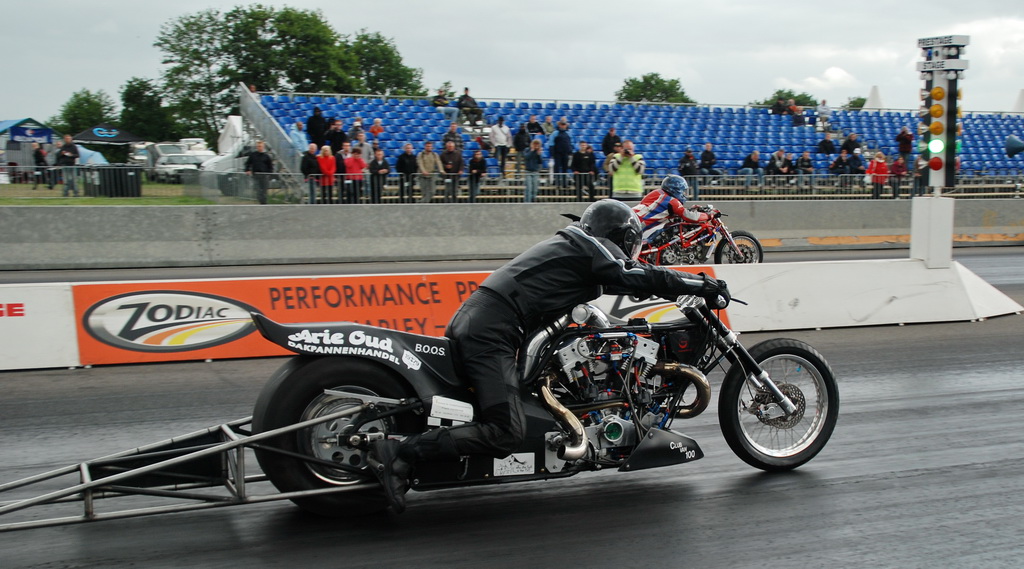 The track in the left lane must have been equally good, because Herman backed up his personal best with an 8.28. This time he sharpened his personal 1/8 mile record that is now 5.217.

So Jolink wins again and has a big lead over Harry van Schie in the championship. Many thanks to the crew of eXplosion. 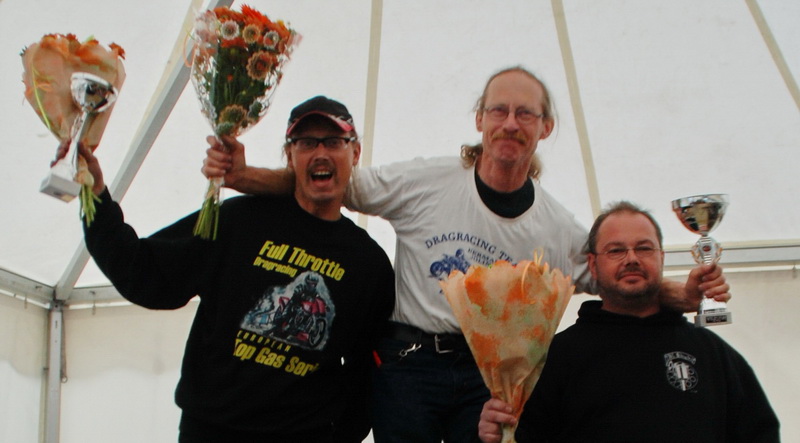 How fast is that Ducati really?
Who is going to stop Herman Jolink?

Will Peter Niklas and his team repair the Honda and produce an 8 second run?

Find that out and more at the next race, again in Drachten, starting on the 9th of July.
See you all there.
Let's all pray for sunshine! 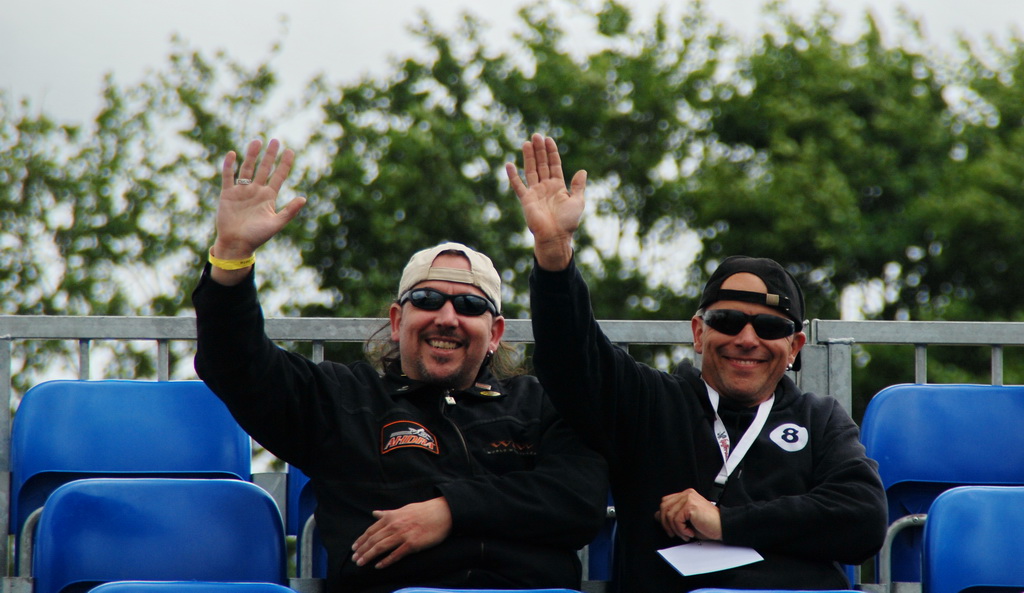