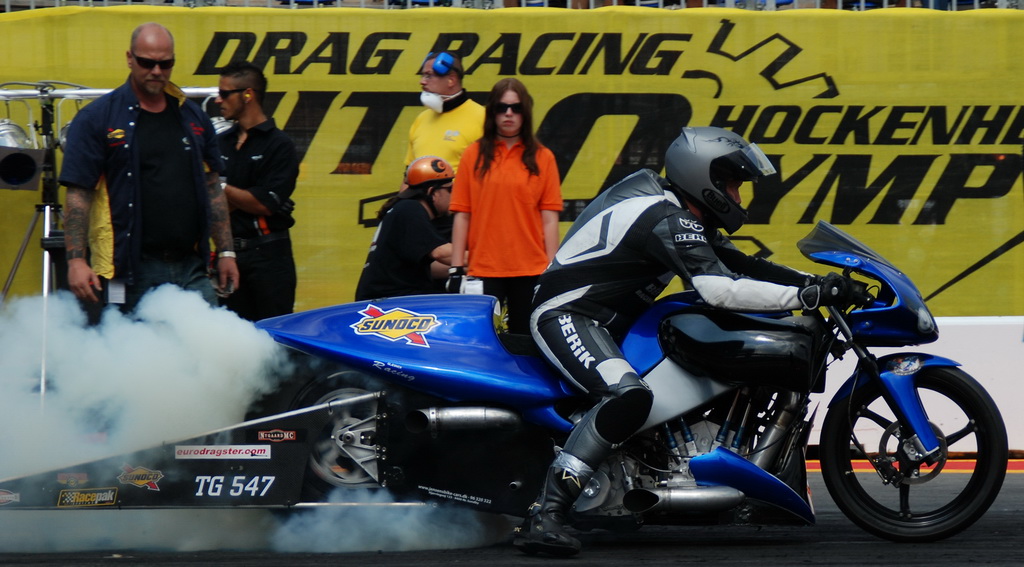 Sixteen racers were on the list in our class.
So it looked like we were going to race a full sixteen field.
Just like last year, some Scandinavian teams came to mess with us.
Anna-lena Asplund and Stephan Andre from Sweden were there, just like last year. 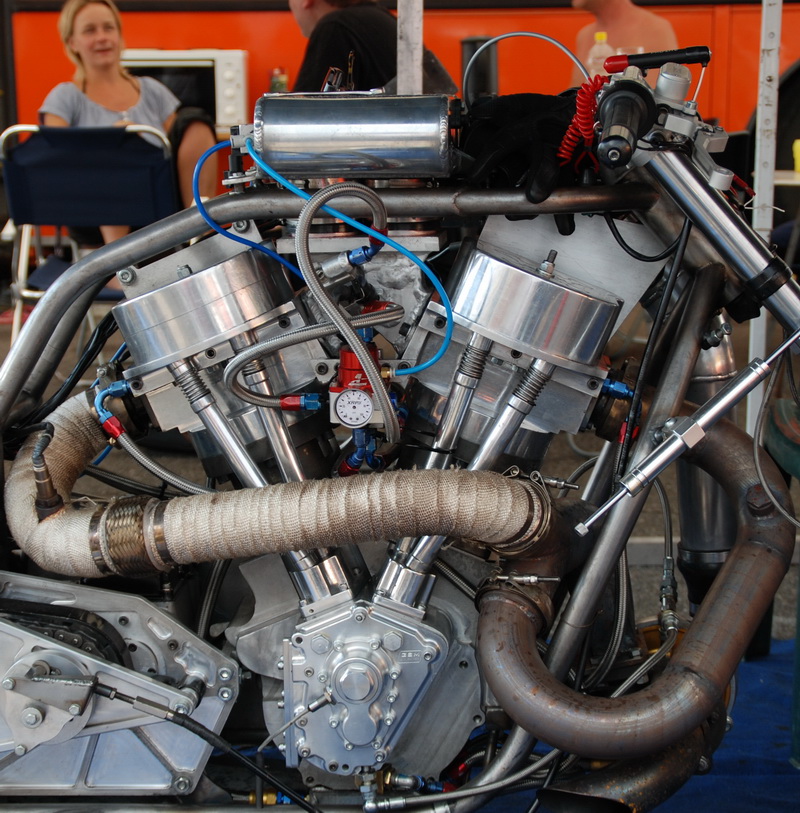 Mats Larsson came along, and they were already set up in the pits as I arrived on wednesday evening. Next day team Glaesner from Denmark arrived with racer Rasmus Olesen back in the saddle after racing the 3000cc Buell at Hockenheim last year for the last time. 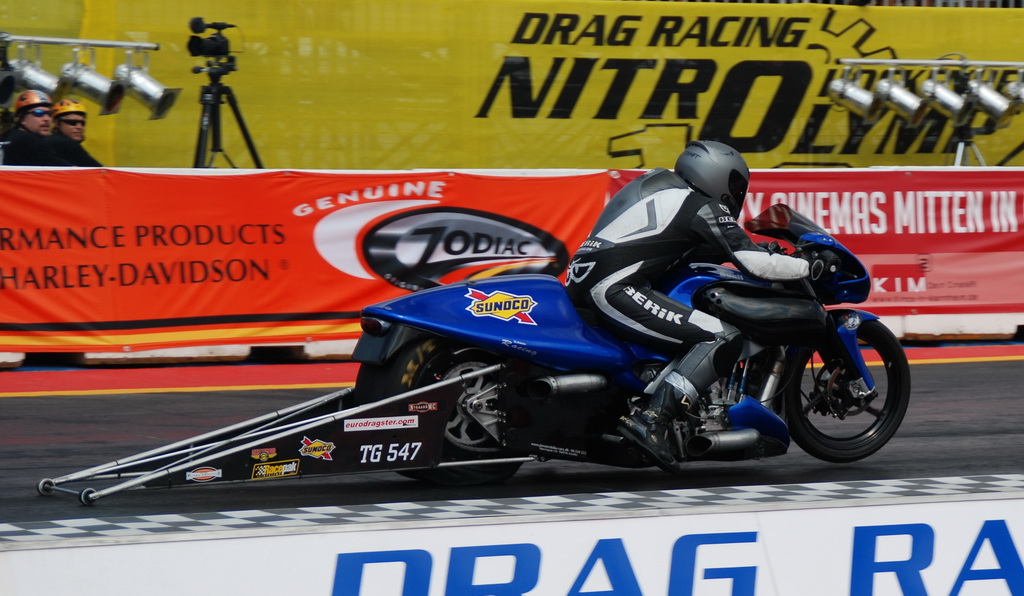 Rasmus and Anna-lena went fast straight from the trailer, set their best times during the first round on friday doing a seven second pass, and the all others had to chase. Anna-lena was in the line-up for 90 minutes, then raced for 7.99 seconds.

Uwe Kahmann from Germany is a member of the class for a few years already, but I never saw him race. 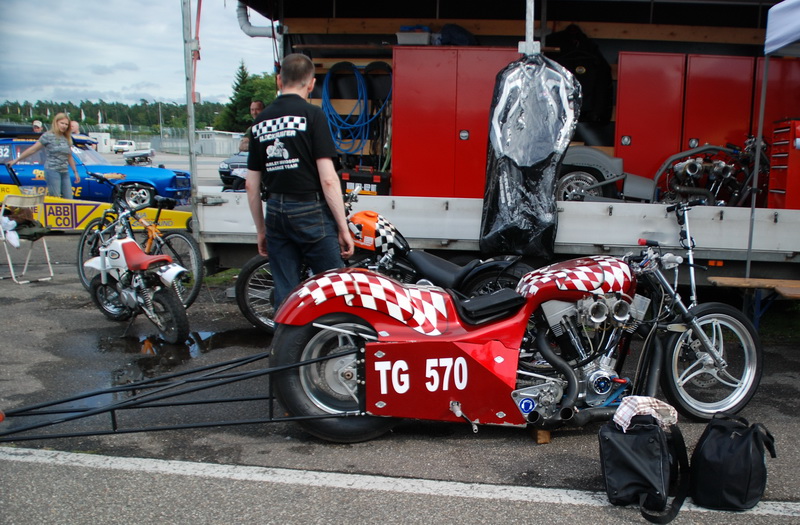 Great to see him at tech inspection scoring his first points.
His first attempt to ride a quarter mile went wrong caused by shifting problems after the burn out.

Bernd Foit broke his bike during warm up, even before he had it inspected.
This was his problem: 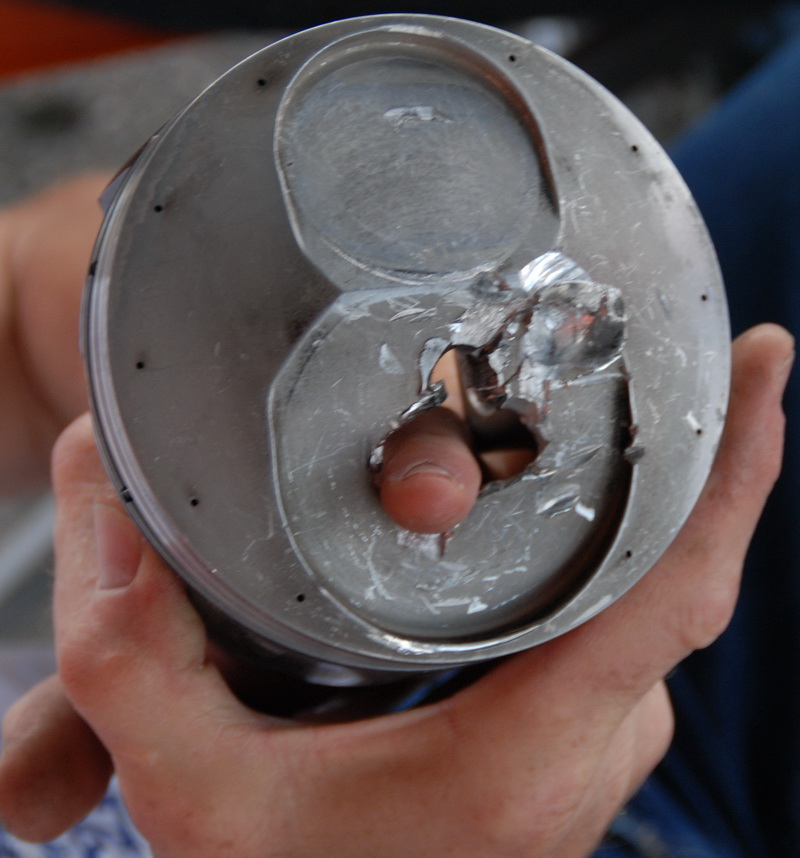 Jorg Lymand had dusted off his blown Harley and came to race with us. 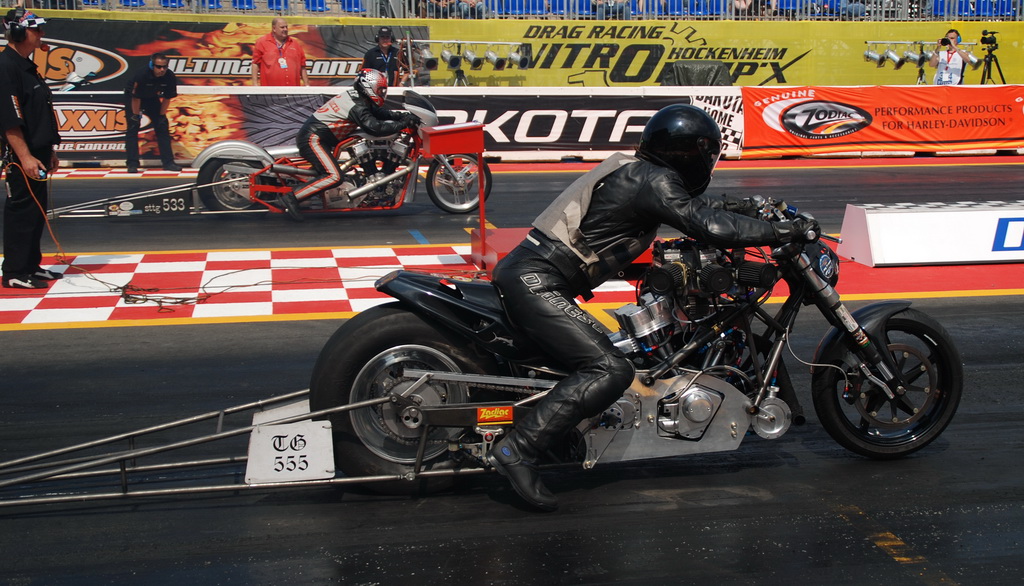 Chriss van Nimmen was there, but not race ready.
So he Belgian honour had to be defended by Marc van den Boer, with mechanic Ronnie back at his side. 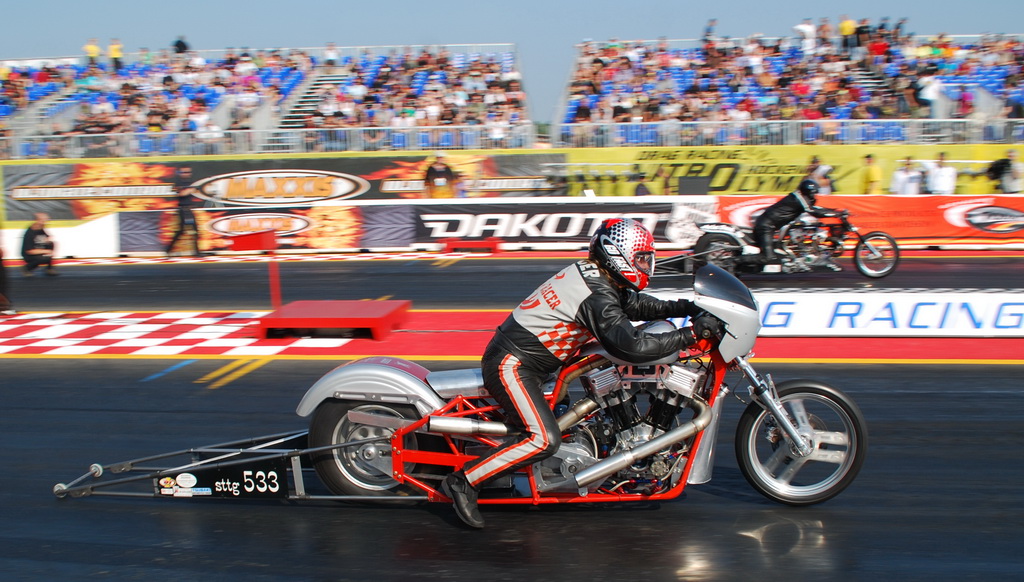 Lando Beugelsdijk from Holland shared a pitbox with Gert-jan Laseur who raced in probike challenge class.
Lando still had to do a lot of wrenching to get his bike complete, so we were not sure if he was going to race.The other two Dutch boys, Harry van Schie and Herman Jolink (picture below) are always ready. 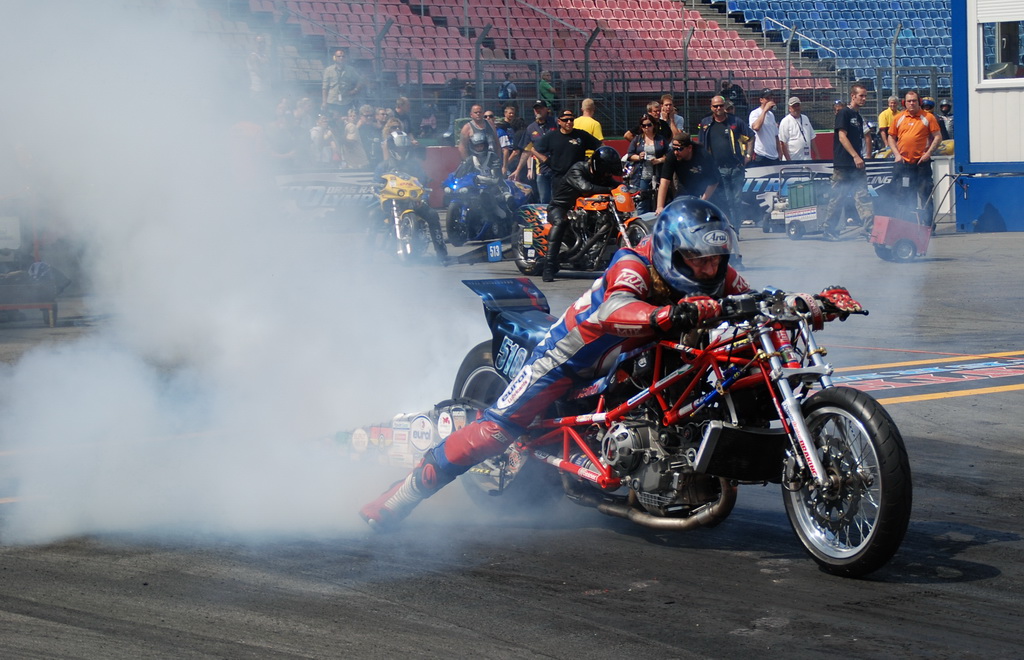 On thursday Harry pollished the wheely bar that got a bit rusty after all the rain in Drachten.
Bernd Niesen (below, left lane) took the charger off his bike, and raced without it. 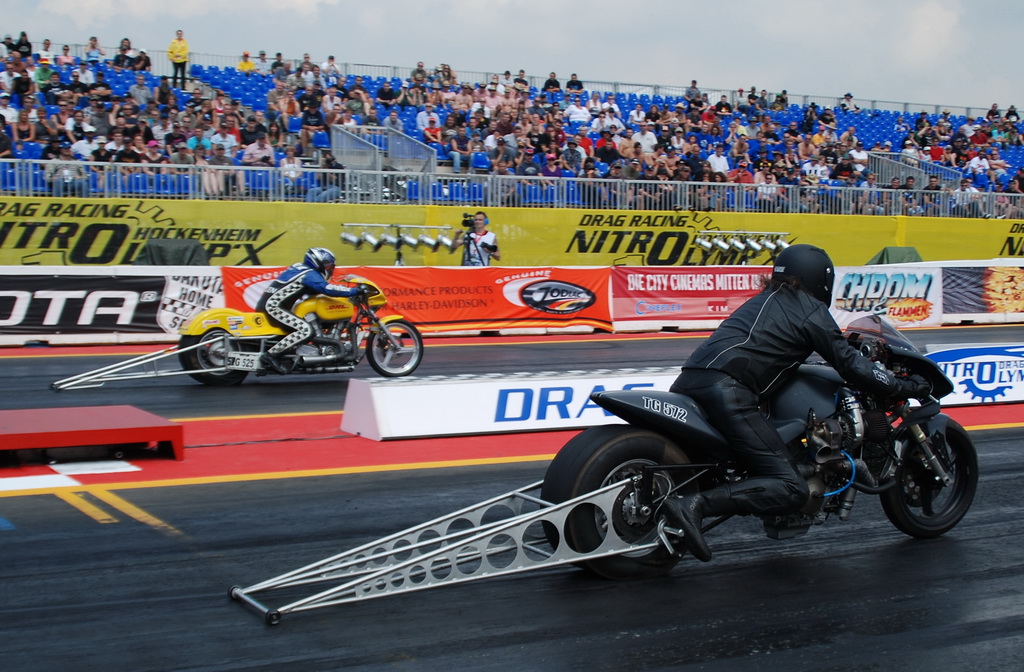 Bernd made one pass only, he had other obligations on saturday. It was good for place #3 after the first day, but in the final qualification list he ended in the middle of the field, just like his team mate Cord Albers. 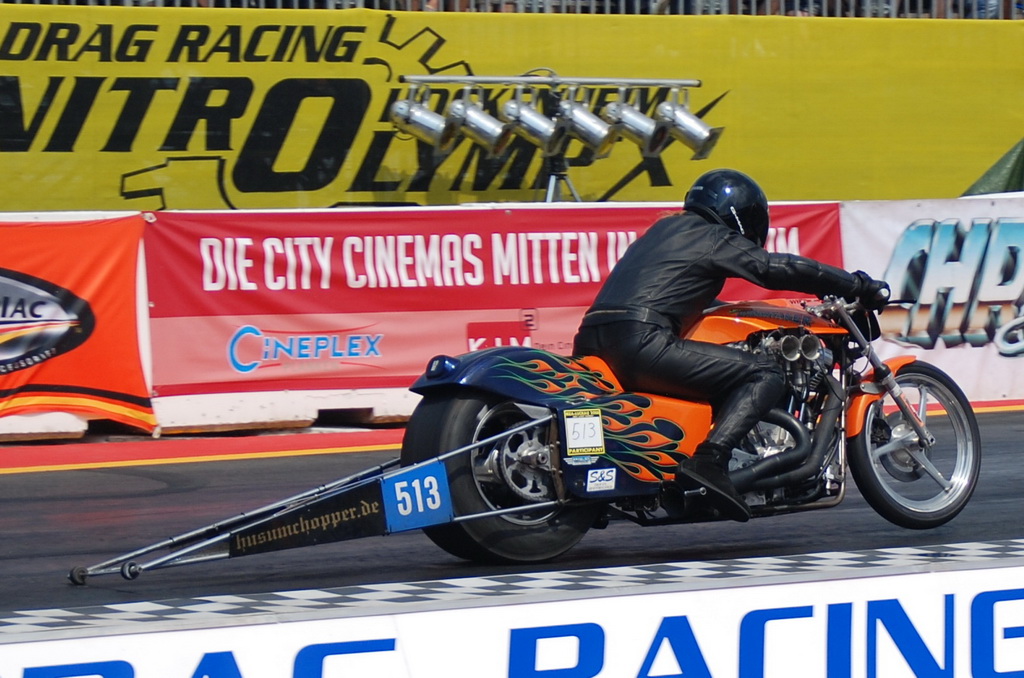 Both bikes of team "Eight Ball" are capable of doing low eights, but did not show their full potential this weekend.

Friday the 13th For Frank Heitmann: 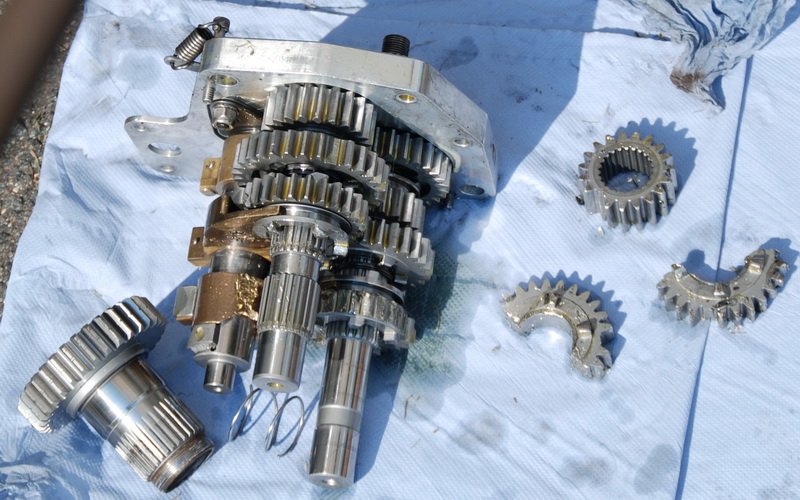 Frank Heitmann wrecked his gearbox bigtime.
Much to my supprise, Frank was able to repair the bike and stay in the race. Only one round was held that day.
Saturday was a great day, lots of sunshine and two more qualification rounds for supertwin topgas.
Asplund and Andre kicked off that morning, but could not better their times.

Then Uwe Kahmann went down the track for his very first time: 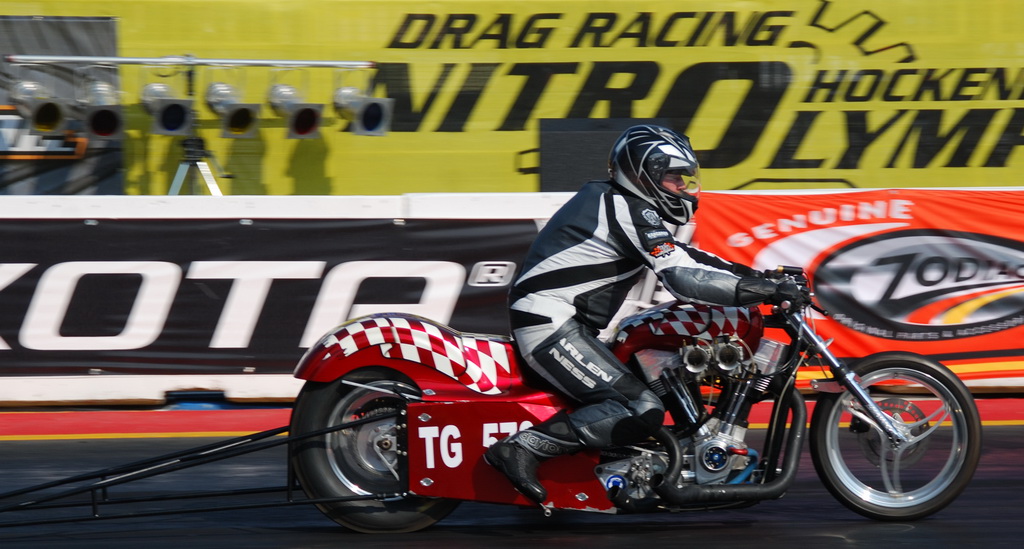 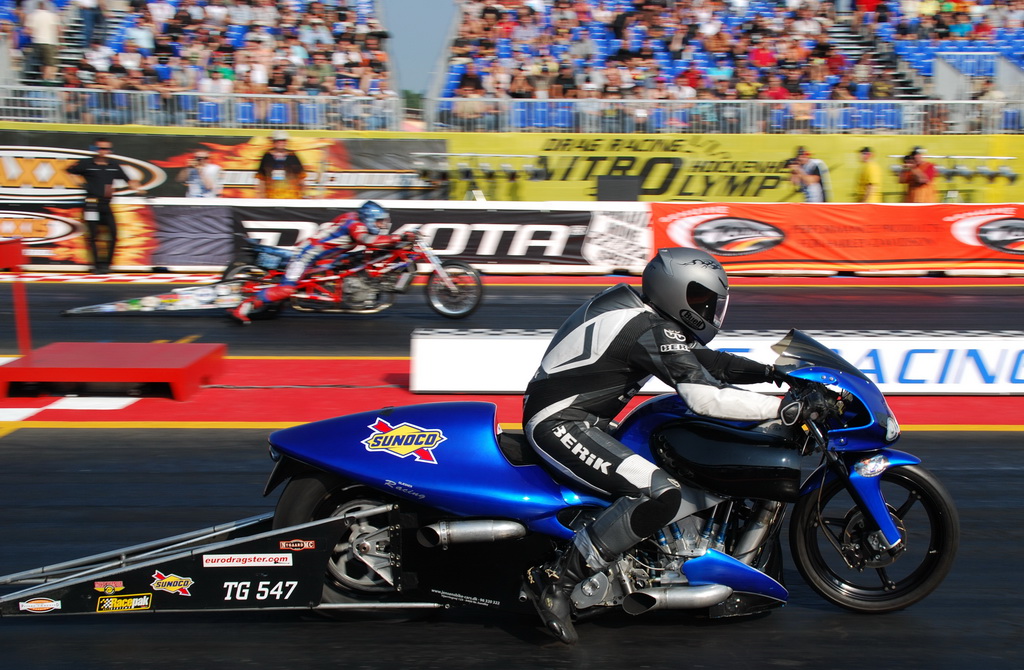 The big supprise came from Peter Niklas and his turbocharged Honda. Team Dragstrip Sideburns had to swap the engine after finding damage at a cylinder on friday. 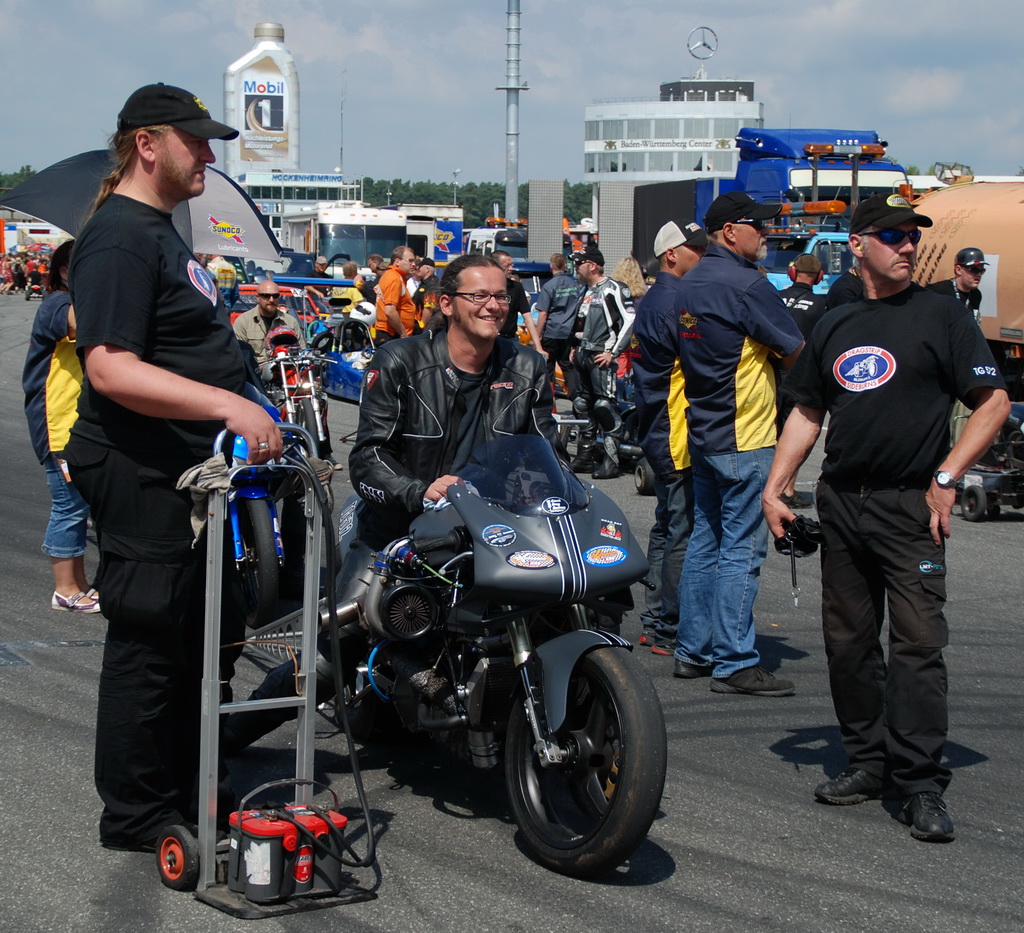 That spare motor was in very good shape. With a personal best time of 9.00 that they set last year, the team was working hard and trying this whole season to get the turbo bike into the eight second zone, and now it finally happened for them.Not just a high eight, but an impressive 8.519 seconds was the result, 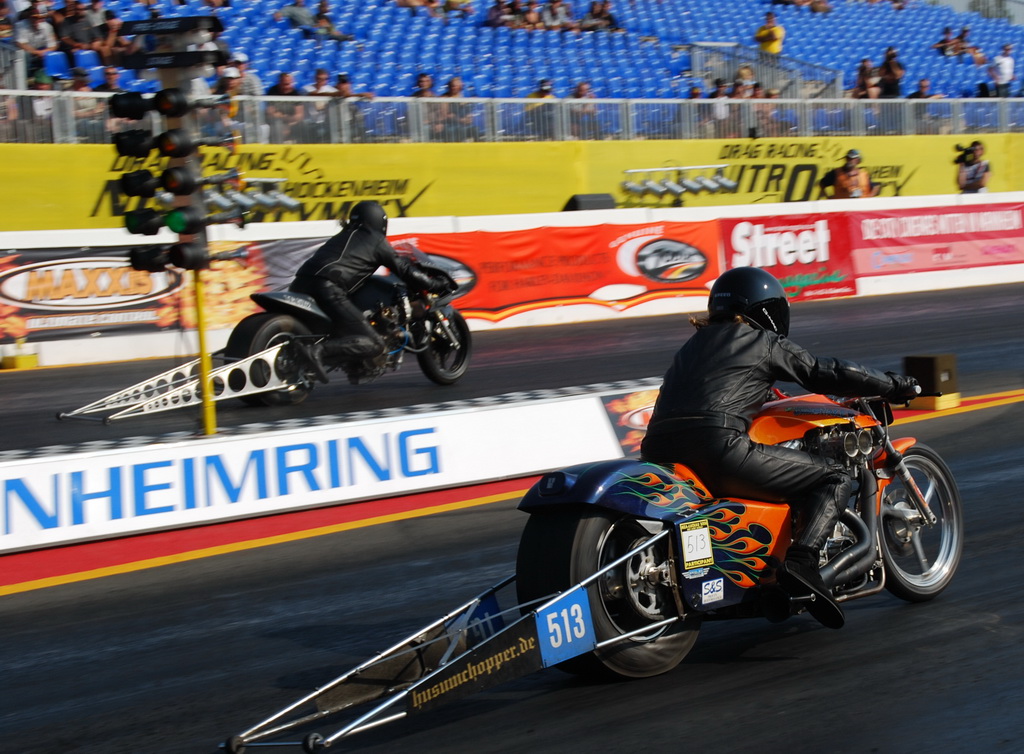 leaving Cord Albers behind and passing Jolink in the list! 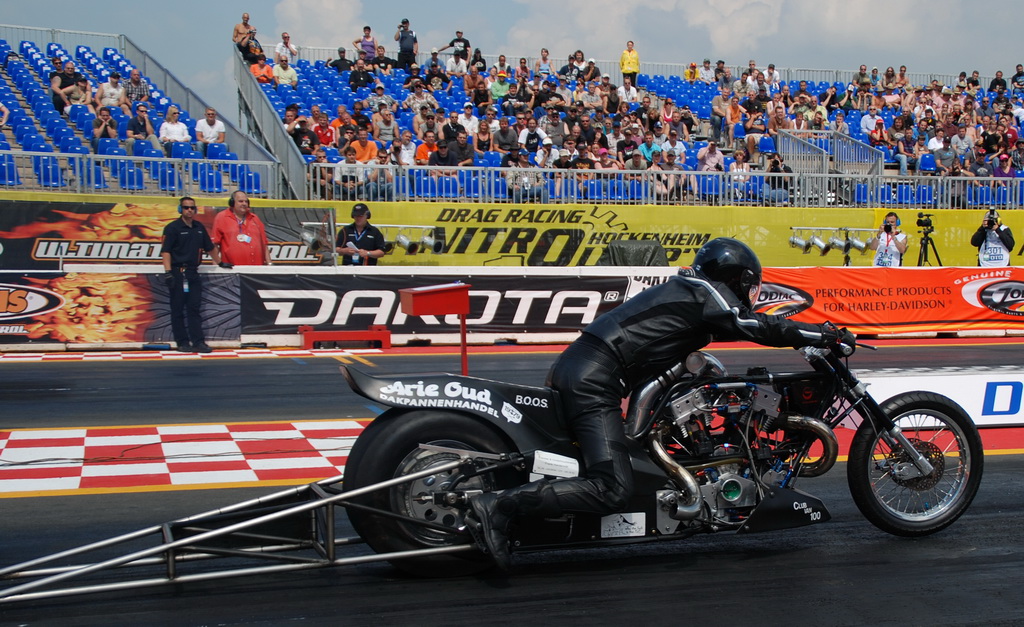 Last pair Frank Heitmann and Jorg Lymand who had to restart the engine. 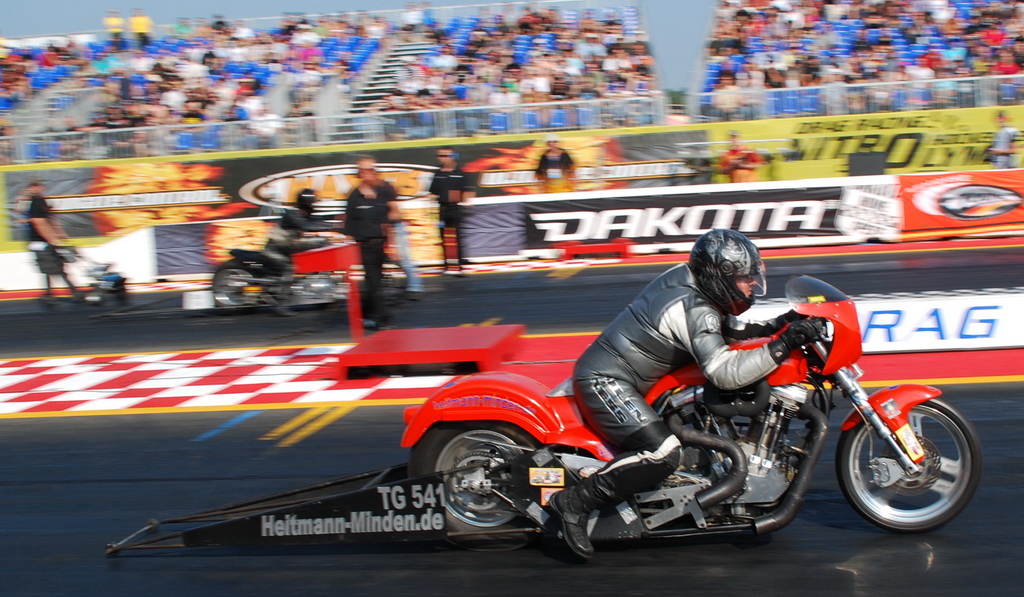 Frank did not find the right setup for the track and can be found at place #9 of this list with still only 12 riders qualified so far.

Saturday afternoon it was the final chance to qualify. 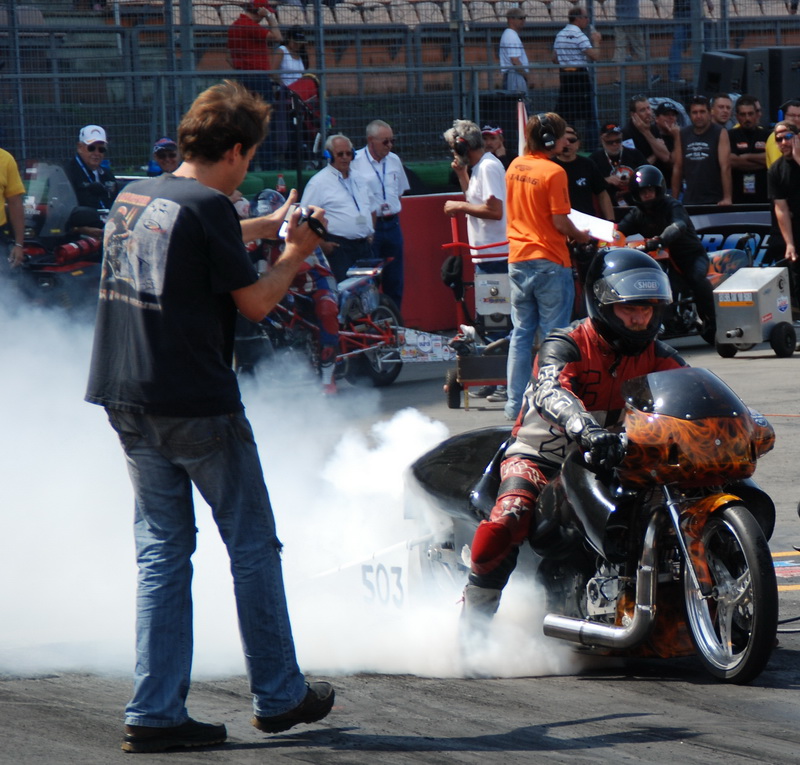 Good thing Lando Beugelsdijk came out, he was badly needed to fill up the field.
He managed to make it to the end, I guess Gert-jan Laseer will put the film on Youtube soon.

Peter Niklas's bike broke down in his backup attempt.

Uwe Kahmann found a loose exhaust pipe bracket, and had it repaired by Anna-lena's crew welder, so he made the call, but did not improve.

Stephan Andre jumped to the third place with an 8.06, a time very typical for him. 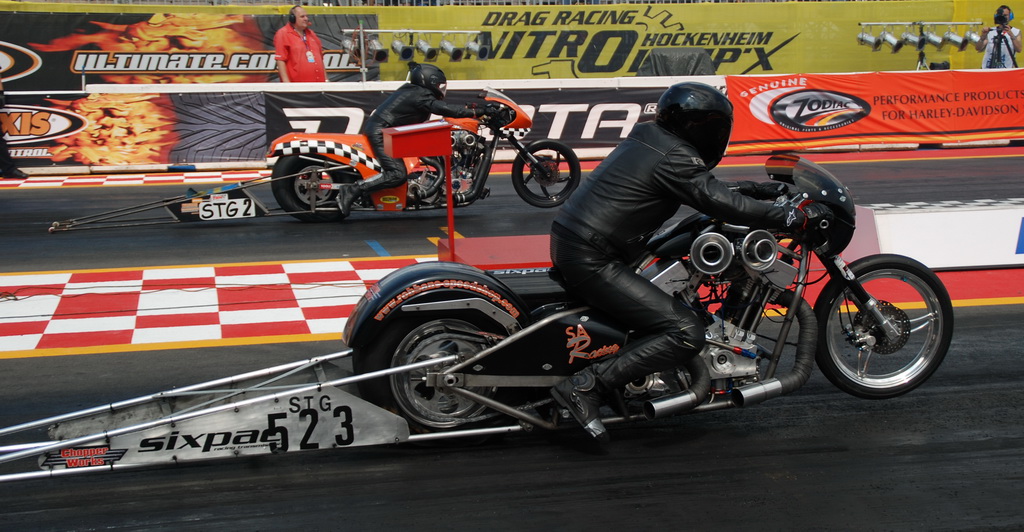 Mats Larsson was not able to make a pass at all, and he was about to leave the start aerea disappointed, when the crew of Hockenheim gave him another chance to run.

It all looked a bit wild and hasty, but he also managed to get into the field. 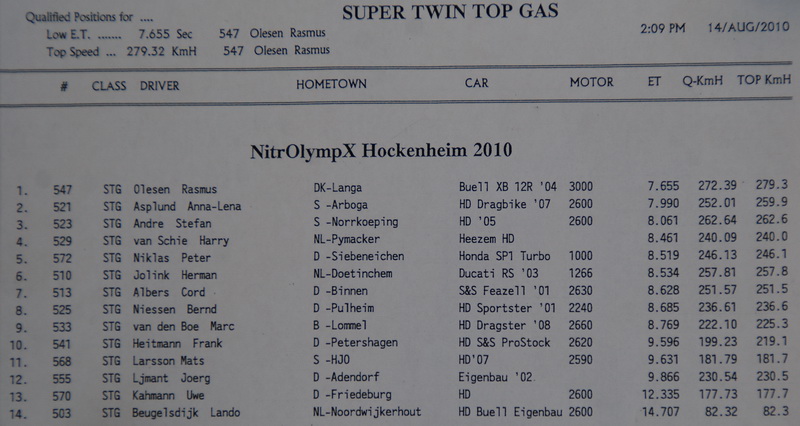 Sunday was a complete disaster. 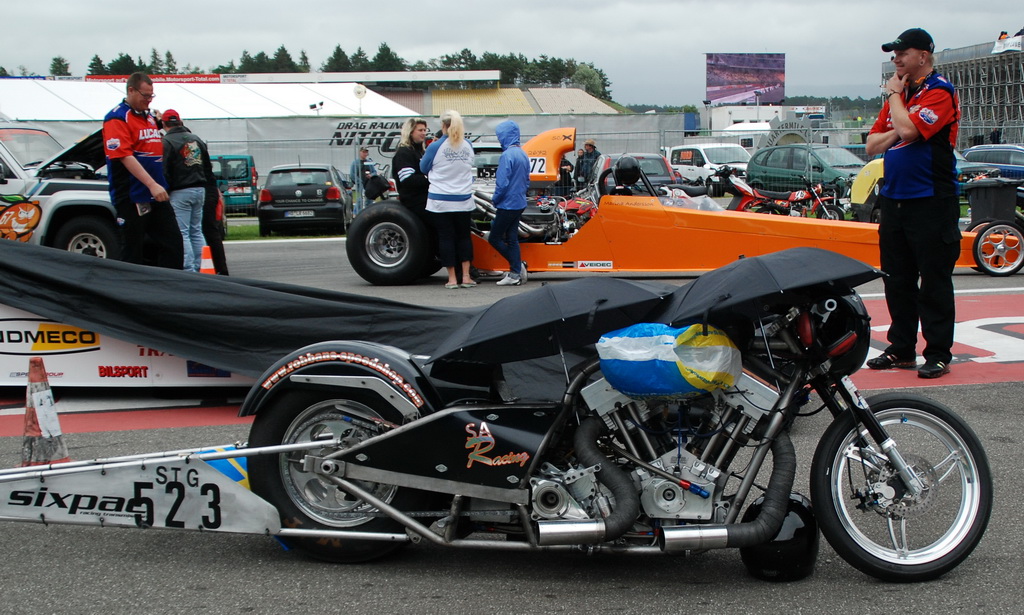 The day started wet, and at nine o'clock I heard a pit call for a track dryer.
By the time the track was ready, there were a lot of cars in the line-up and the FIA had fixed times for their championship pushing all other classes to the side. Then there was a 50 minute delay because of a faulty stage light. Followed by a 30 minute lunch break, that must be held according to the permit. Dark clouds were packing in the sky while the topgassers lined up.Then it started to rain and the five o'clock curfew closed the door for everybody. 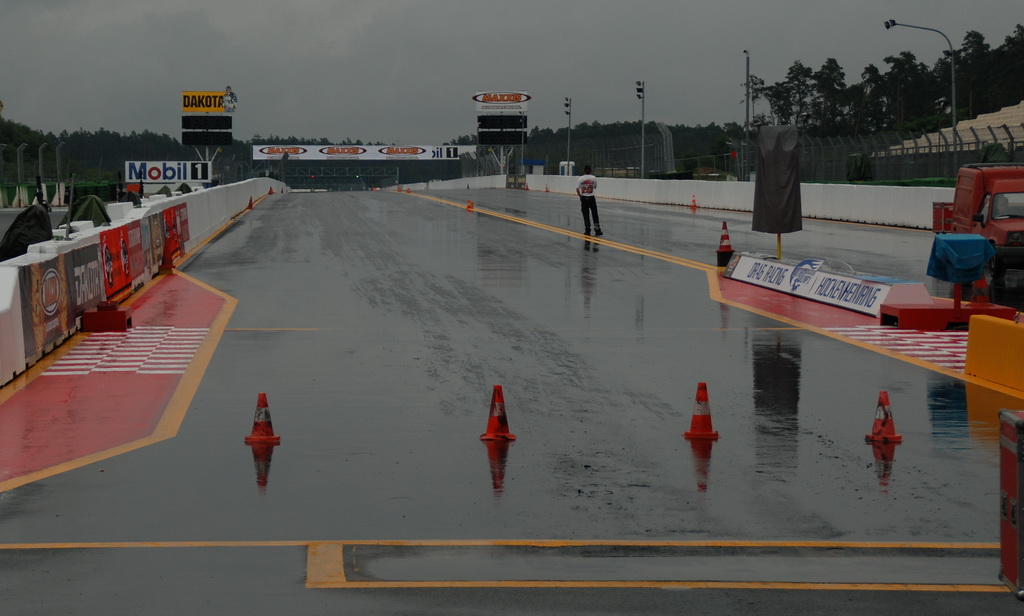 Still a prize giving ceremony was held in the evening, giving awards for the best qualifiers. 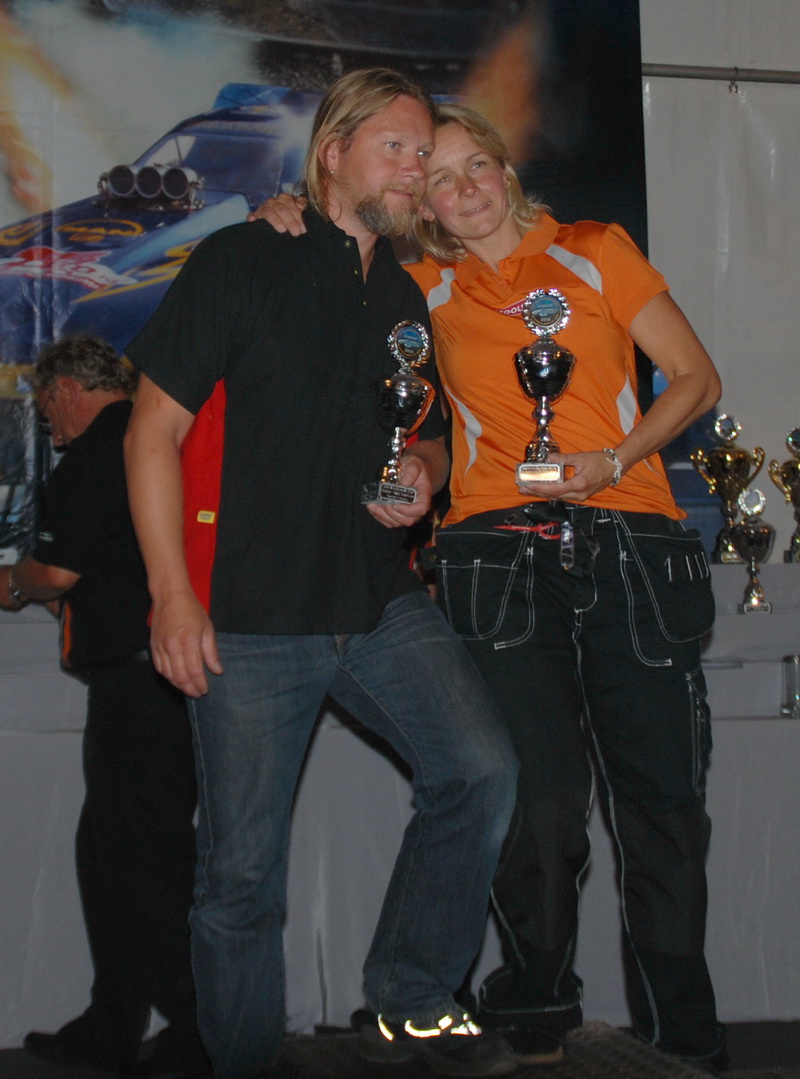 Rasmus Olesen and team Glaesner went home early, so Rasmus is not on this picture.
A special award was given to Herman Jolink for racing his 35th season.
Will he be in the guinness book of records some day?
With two more races to go, Herman is still in the lead in the euroserie. Harry vand Schie is second, ran quicker this weekend, and with two more races to go still has a good chance of passing Jolink.
Next race in Drachten, next weekend.

A large picture gallery of the NitrolympX can be found here.