The Dutch finals, 20-22 august 2010.
Race #6 in the Euroserie, held at the airstrip in Drachten, Holland.
A great dragrace till into the finals that with sadly a tragic death at the end.

Nine teams were expected for topgas, but Ludo Scheepers did not show up.
John van Geytenbeek was also on the entree list, but did not race with the topgassers like he always does at Drachten.
This race he was in the saddle of a topfuel twin formerly owned by Ron Honiet from Canada. 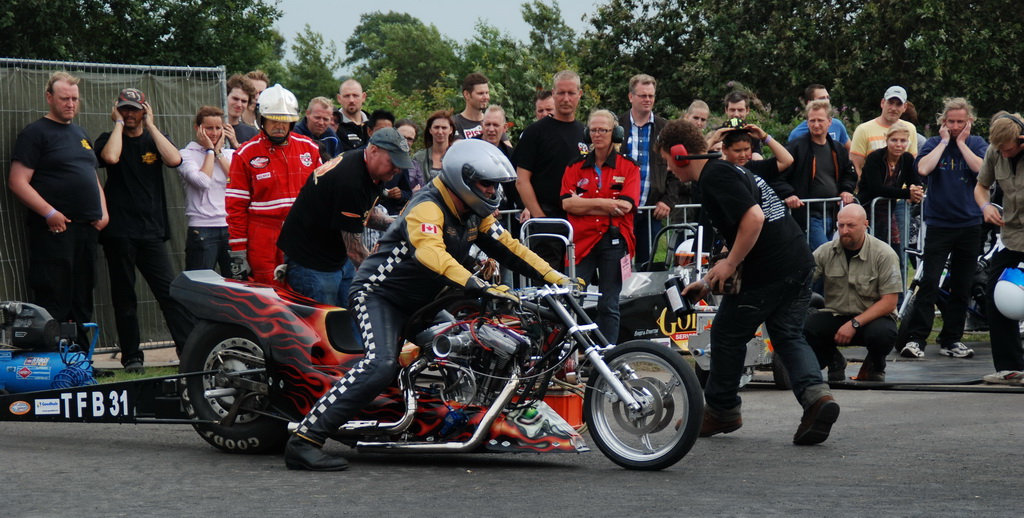 His first race running on nitromethane in Drachten was also his last, as he lost his life caused by a big engine explosion in the finals.

Here's what happened over the weekend.

Seven guys had to battle it out in the supertwin topgas class.
The track condition was excelent, and most racers did better then in Hockenheim last week after the first rounds of qualifications on friday. 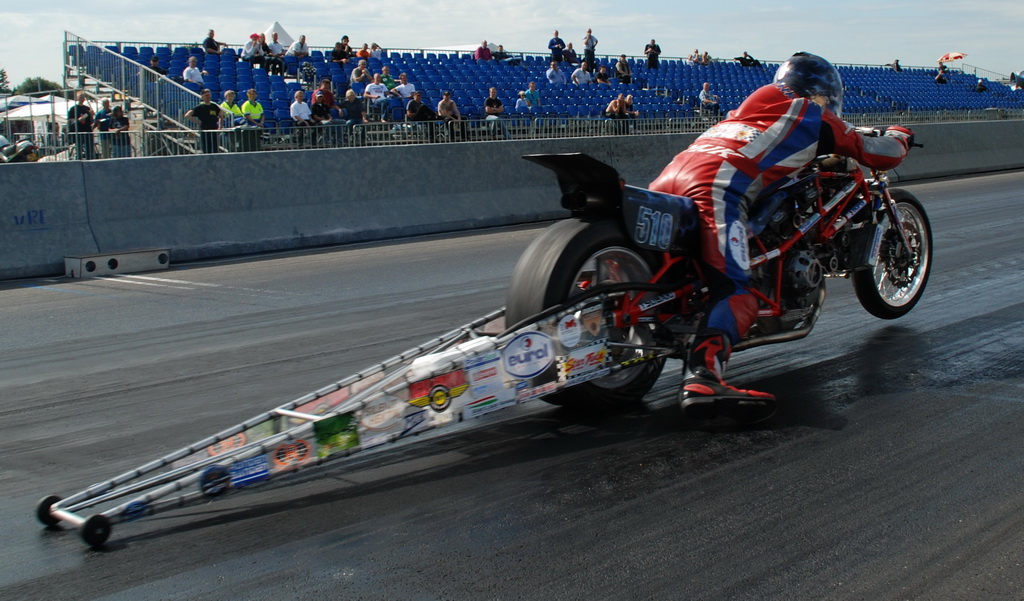 Herman Jolink opened with an 8.48 and that gave the team confidence for the weekend. Herman usually starts off with a high eight and works his way down during the race. His worst run this weekend was an 8.68 when a clamp that holds a carb came loose. After running the Ducati eight times, Herman finished off on saturday doing an 8.3 in both lanes while taking his 60foot time down to 1.18sec. and reaching a topspeed of 257.0 kmh. (note: the system of eXplosion only shows the speed that goes with the quickest pass on these lists)

Cord Albers feared his gearbox broke after his first attempt.

But after inspecting it, he could be reliefed. 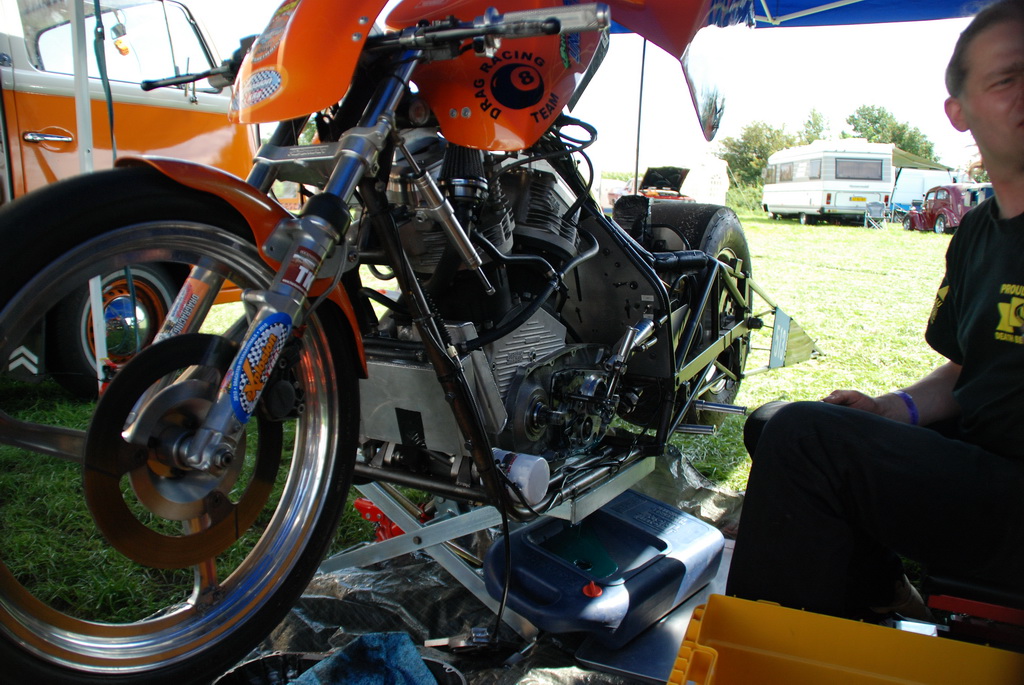 With his Feazell-Buell he got on top of the list friday evening with an 8.2.

Peter Niklas showed that his 8.5 of last week was no lucky shot with the turbocharged Honda. He sort of backed it up with an 8.6 sec. pass but also found out it was hard on the parts. 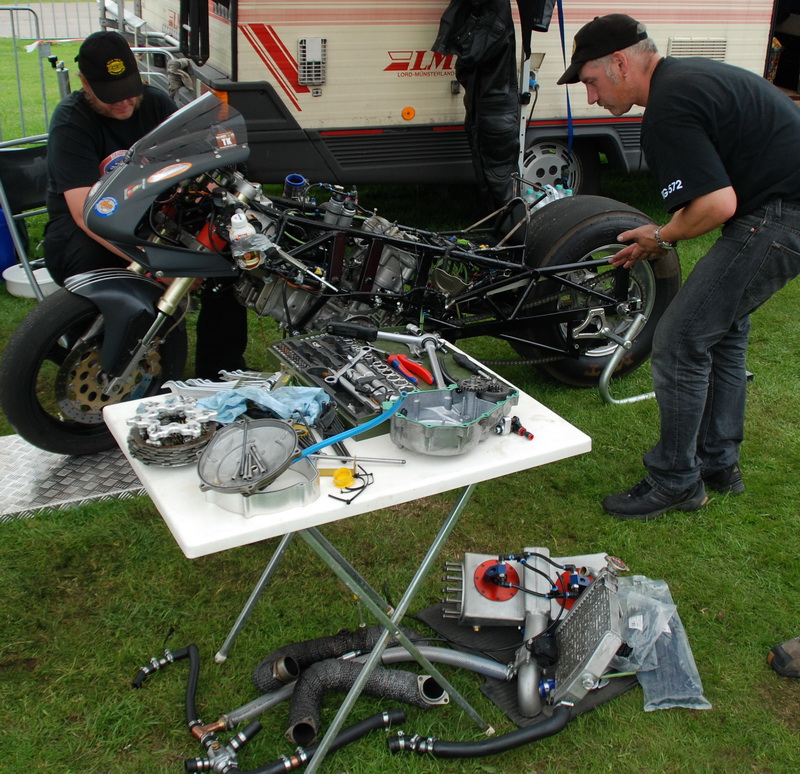 Harry van Schie is chasing Herman Jolink in the point list. Harry's team was tuning the injection for the cool air in Friesland.
On saturday Harry and Cord Albers both did an 8.2 second pass. in a great side by side run, but Cord stayed on top of the list, with Harry just 0.004 seconds behind. 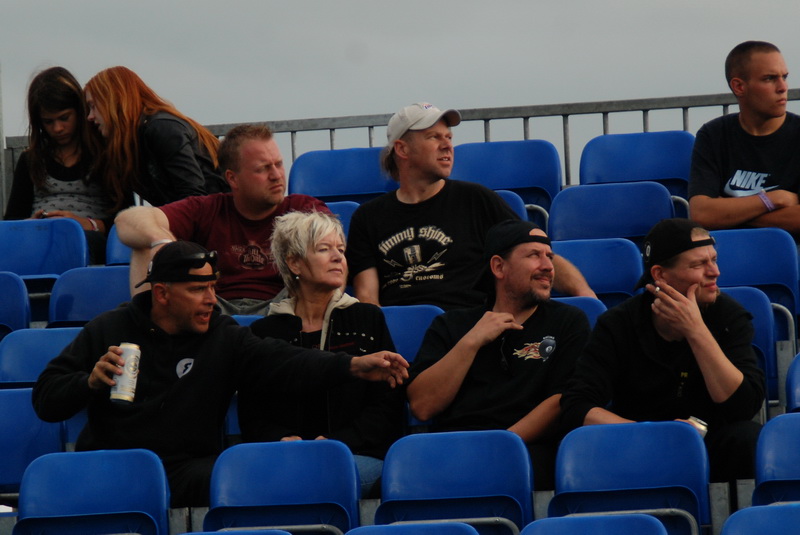 After that, Cord and his team spent the rest of the day in a relaxed mood watching the action of the others. 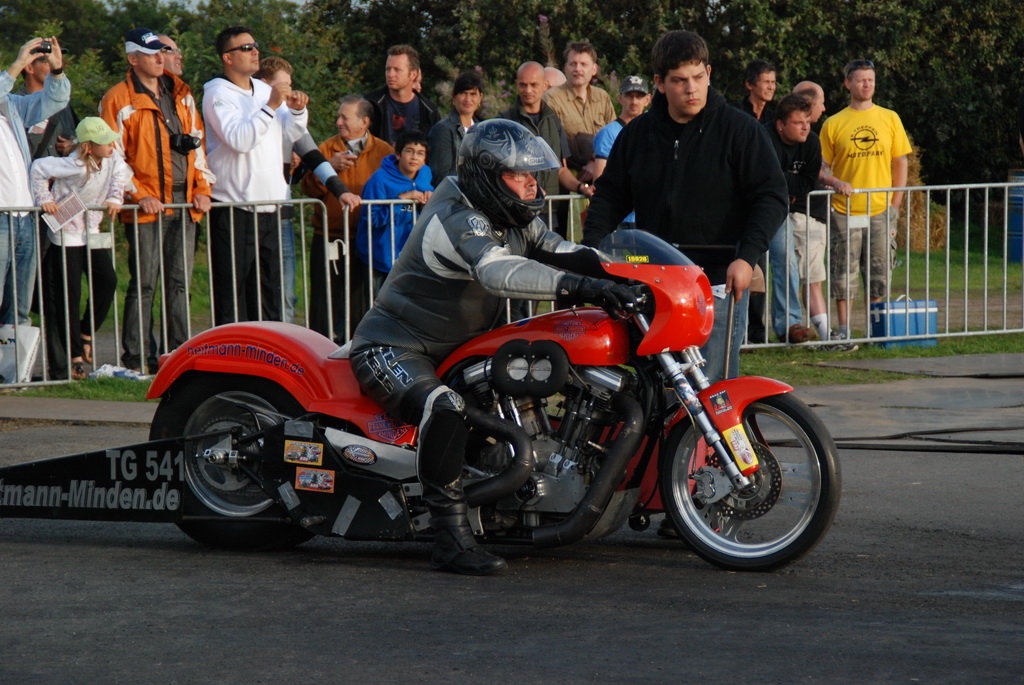 Like Frank Heitmann who arrived late and did not race on friday. 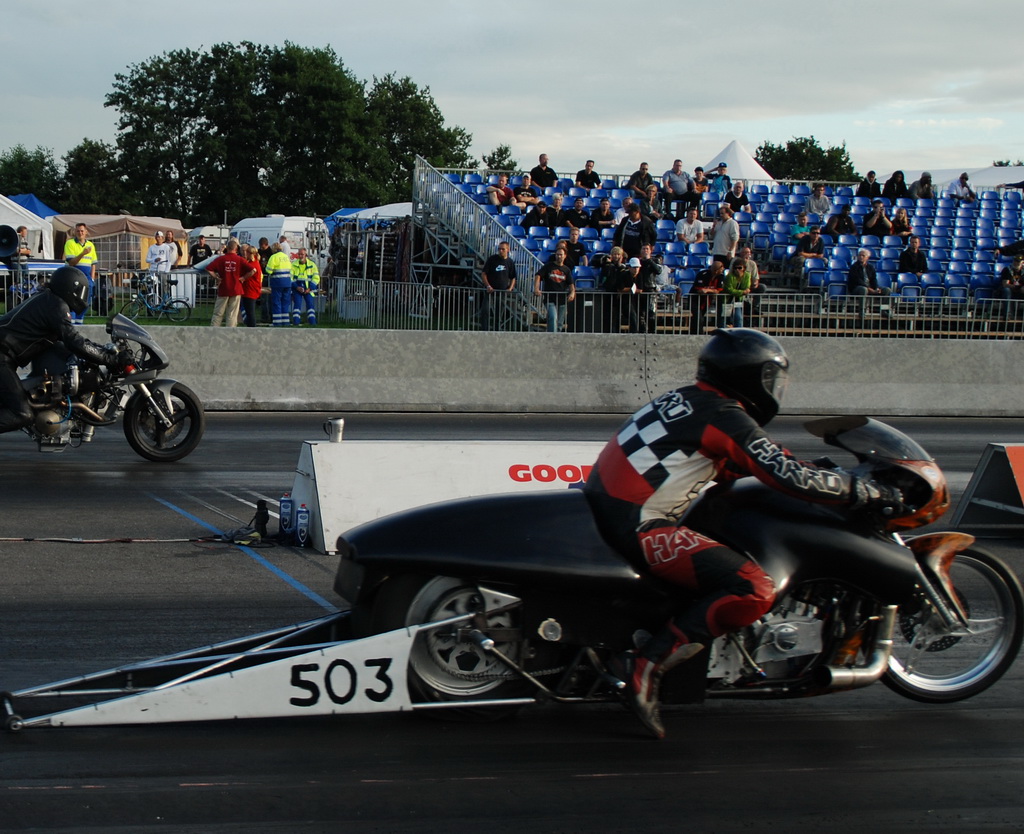 And Lando Beugelsdijk who improved. But so had van den Boer so he stayed at place # 6.

The right lane became the favorite after Danny Bellio blasted his top methanol funny car down there setting a new track record.
An oilspill by Peter Niklas and some raindrops in between could not spoil the fun so far while the racers and crew prepaired for the dragrace on sunday. Here's the final qualification list, with Frank Heitmann now also on it and all others in the eight second zone.

Cord Albers had a bye run in the quarter finals. So what could possibly go wrong for him?
Well, this run he broke his gearbox for real, the team packed in and went home early on sunday.
Peter Niklas and team " sideburns" had swapped the engine and tested it during the last chance on saturday 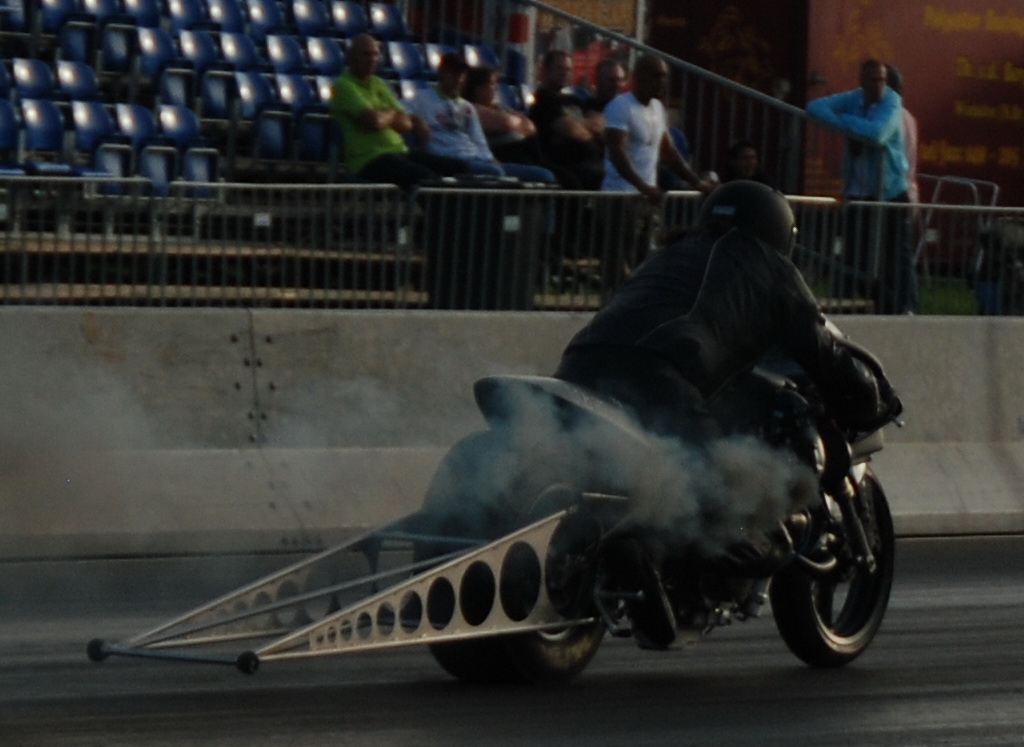 Here you see him smoking up the place on saturday with his Honda, but it would not run on sunday. So Marc van den Boer advanced, and with Cord broken, Marc had also no opponent in the semis, so was already with one foot in the finals.
Harry van Schie had no problem with Frank Heitmann who found out he was running with the wrong injectors.
Last pair in the quarter finals was Herman Jolink against Lando Beugelsdijk.
Herman did not know what to expect because Lando just finished constructing his bike last week. 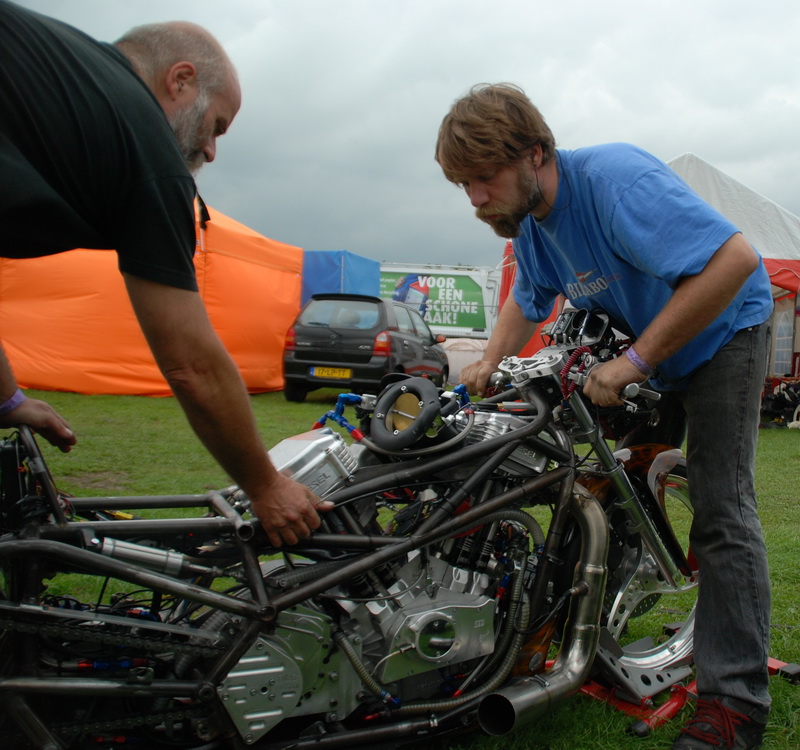 And again he did a lot of wrenching instead of racing this weekend using only a few of the nine qualification rounds that were held.
Beugelsdijk revved up his S&S Buell way to early and made a big red light.
Jolink saw it happen, but did not take it easy! An 8.3 gave him lane choise in the semi's against Harry who had advanced with an 8.4. 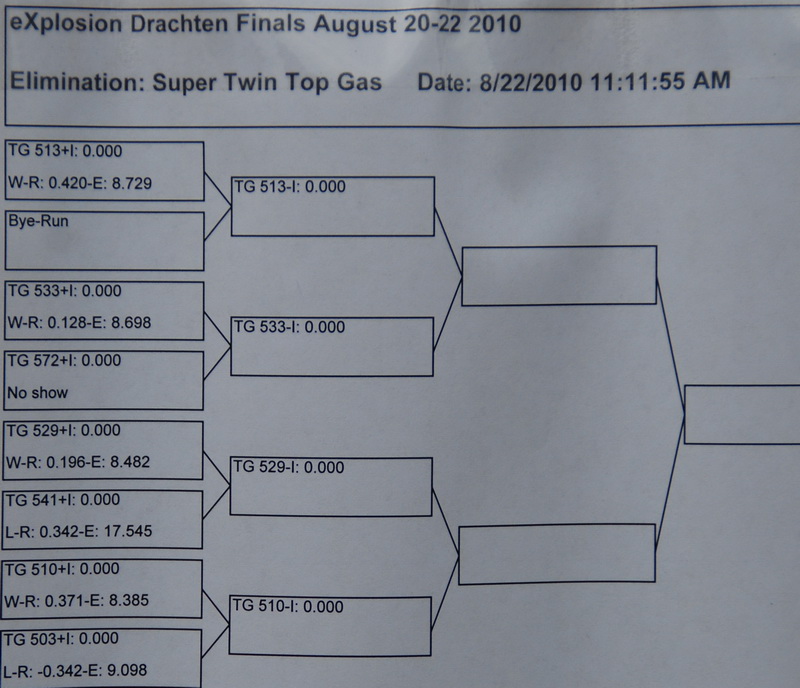 Herman was a little slower in the semi finals, but so was Harry (8.4 vs 8.5), so Jolink took the important win, widening the gap in the 2010 championship between him and Harry, and getting very emotional for a while at the end of the strip after his run.

Before the finals were held, there was the race for 3rd and 4th place. 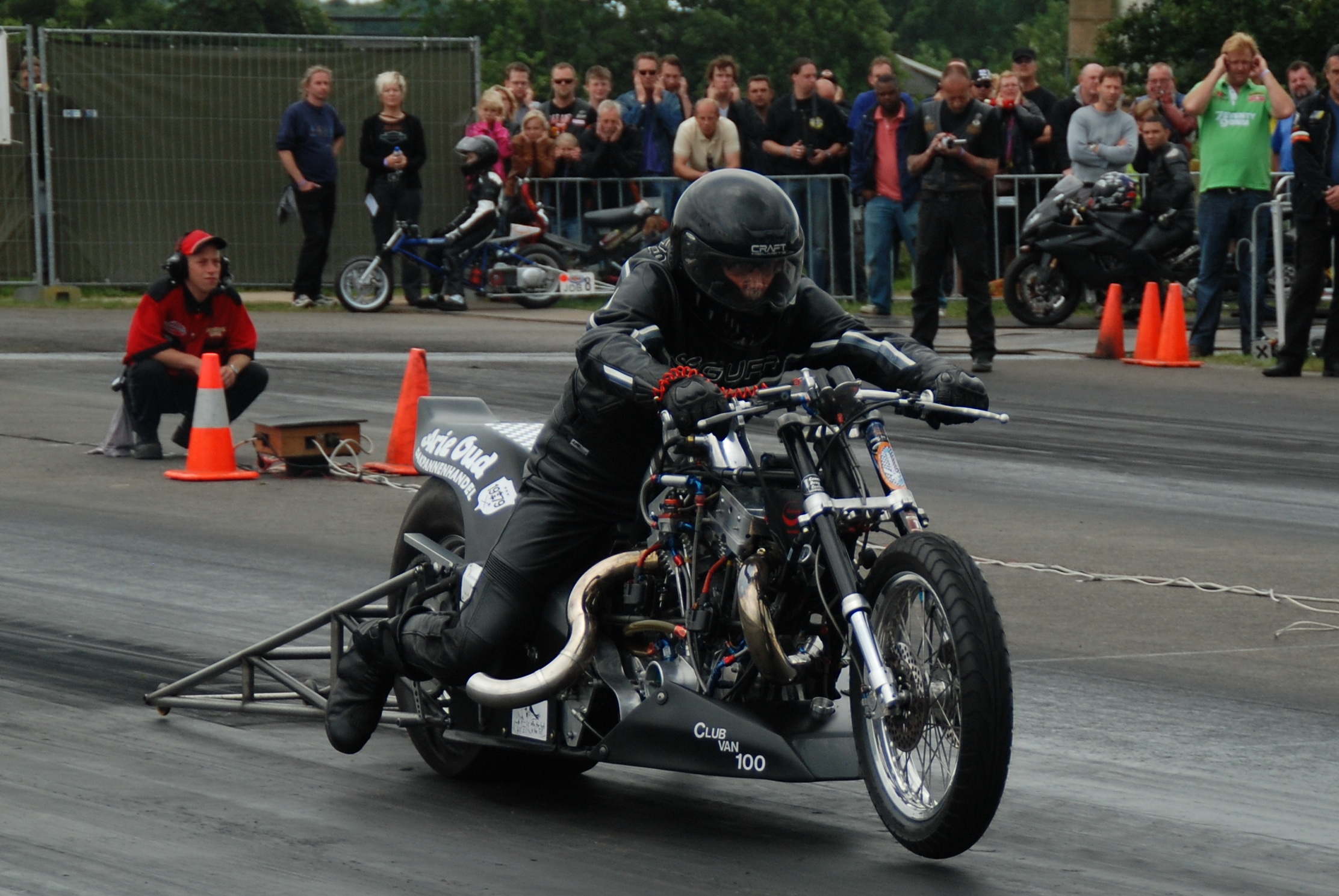 Harry had a bye run and his bike did not run well. But they logged some more data and can try to sort the problem out before going to the next race.

Marc van den Boer's wife Linda had stayed at home. Still Marc was given the award for best appearing team with a presentation on the track. 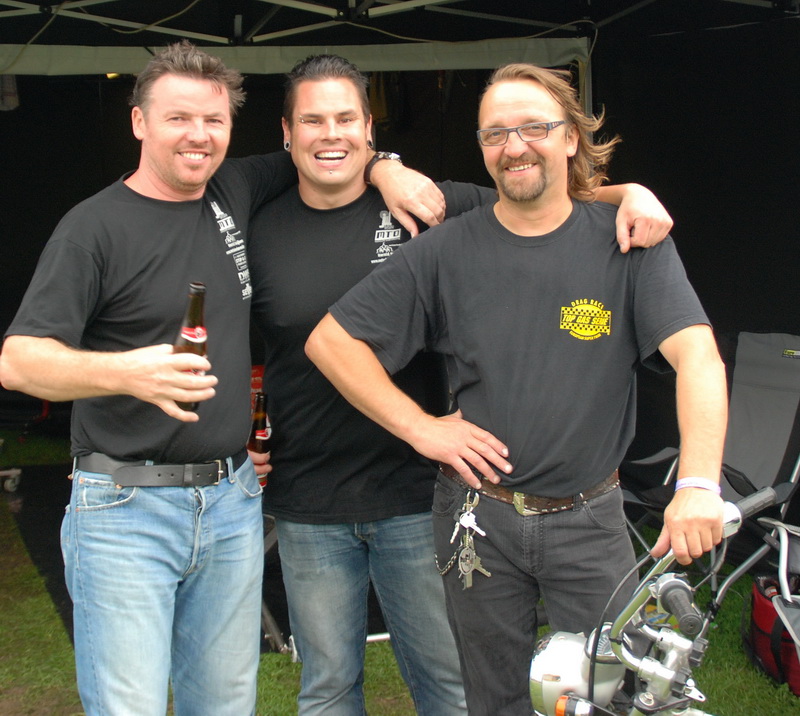 But his fans claim he got the award for bringing the best beer.

The organisation was ahead of the time plan, so maybe even some test runs were possible after the race. So everybody was in a good mood. 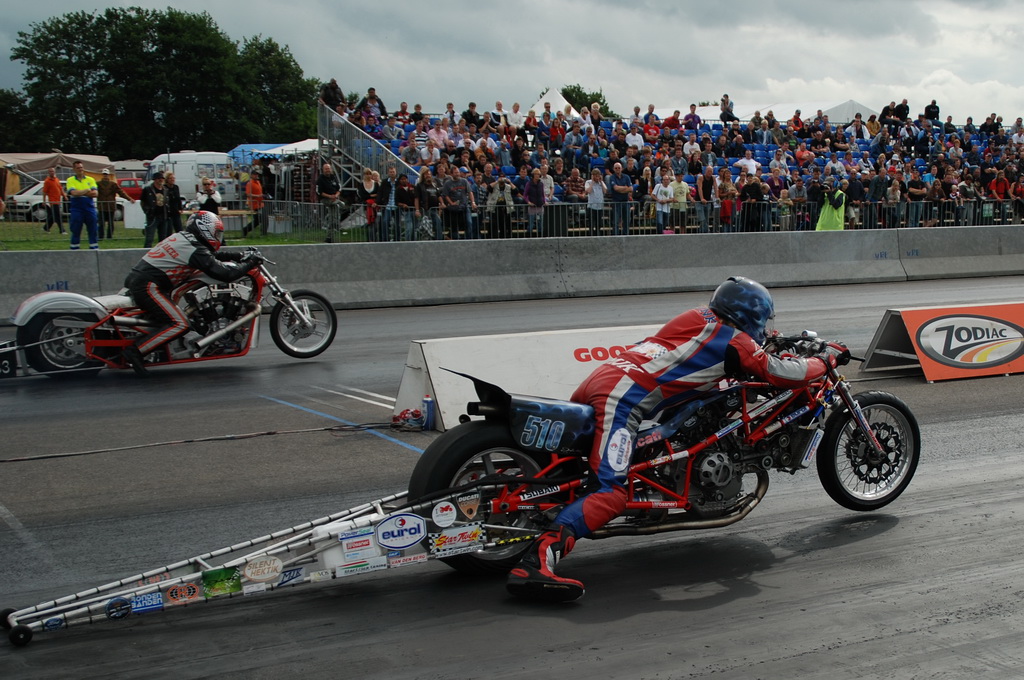 Herman Jolink beat Marc van den Boer in the finals, now he's about 95% sure of the title and also became the " 2010 Dutch Open" champion, winning 2 out of three races in Drachten this year. Then Jorgen Teunissen, a former member of our class, won his very first race with his "Stainless Steel Stallion" in the Funny Bike class. But no ceremony was held or awards were given this time.

While Marc and Herman and the final funny bikers waited at the end of the track to be towed back, they could hear the nitro twins being fired up and do the burnout, soon followed by a loud BANG!!! 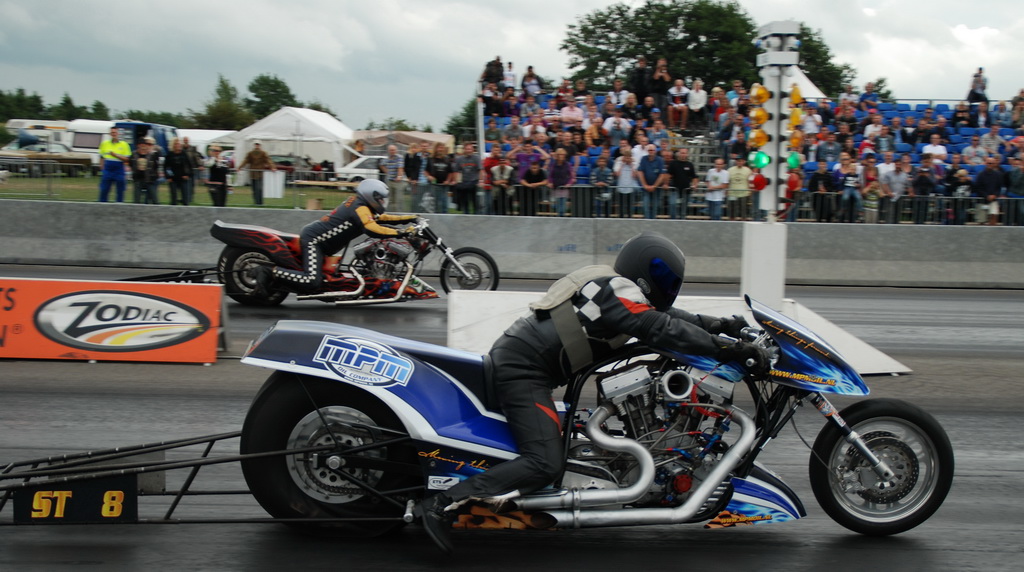 John van Geytenbeek (left lane) had advanced into the finals against Martijn de Haas in his very first race running on nitromethane.
The engine of John's bike exploded half way down the track.

While towing back Jolink I saw the doctors reanimating John on the track and soon after that, a trauma helicopter arrived. When it did not fly away after a few minutes, it became clear that John van Geytenbeek had lost his life!

On Sunday, August 22, 2010, our brother John Canada (John van Geytenbeek)
died by a tragic accident on the dragracetrack of Drachten.

The condolence will be held in the clubhouse of Confederates MC Amersfoort
Wednesday and Thursday between 19:00 and 21:00 (August 25 & 26). The address is:

On Friday (August 27) John’s funeral is at the cemetery Rusthof at the Dodeweg in Amersfoort, Holland.

The funeral procession will start Friday at 09:00 am from Bar The Flame.

You can leave a tribute here.

Our deepest sympathy goes out to his family and friends.
And to all the people at dragrace vereniging eXplosion and everybody else who has to deal with this tragic loss.
Rest in peace, John.

Next race is with Mosten MC in Denmark, very soon.
Herman Jolink needs to qualify at place #12 or better to become certain of the title.
If Herman fails to do so, Harry van Schie still needs to win the last race of the season to become the champ.
But the entry list is so strong that it's tough job. Last years winner and our 2009 champ Jesper Thiel is on it, and he races an even faster bike now.
If van den Boer can stay ahead of van Schie in the last race, Marc grabs the second place away from Harry.
Let's see what happens in Denmark.