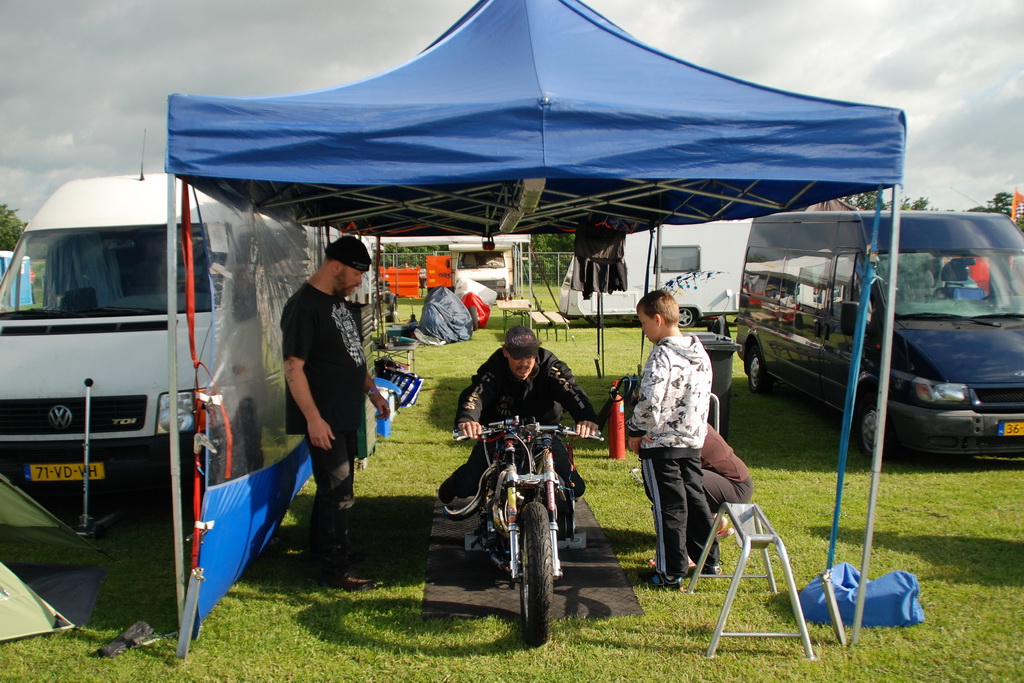 Friday started bright and sunny, when team Full Throttle unloaded the blown Harley dragbike. Rider Harry van Schie sat on it to try the new handle bar. Jaap had discovered a minor crack in the old one so replaced it. The former owner of the bike, Job Heezen is a lot taller then Harry, so they choose a slightly different bar. The scrutineer came by to inspect the bike, and after his okay, Harry collected enough points to pass Herman Jolink in the point list and take the lead after Jolink was on top for twentyfive months in a row.

Our champion was in Italy to promote our sport by doing demo runs at the World Ducati Weekend. The fans of Italian steel enjoyed the sound of Christian Bruhn's nitrous assisted Duc 996 instead. 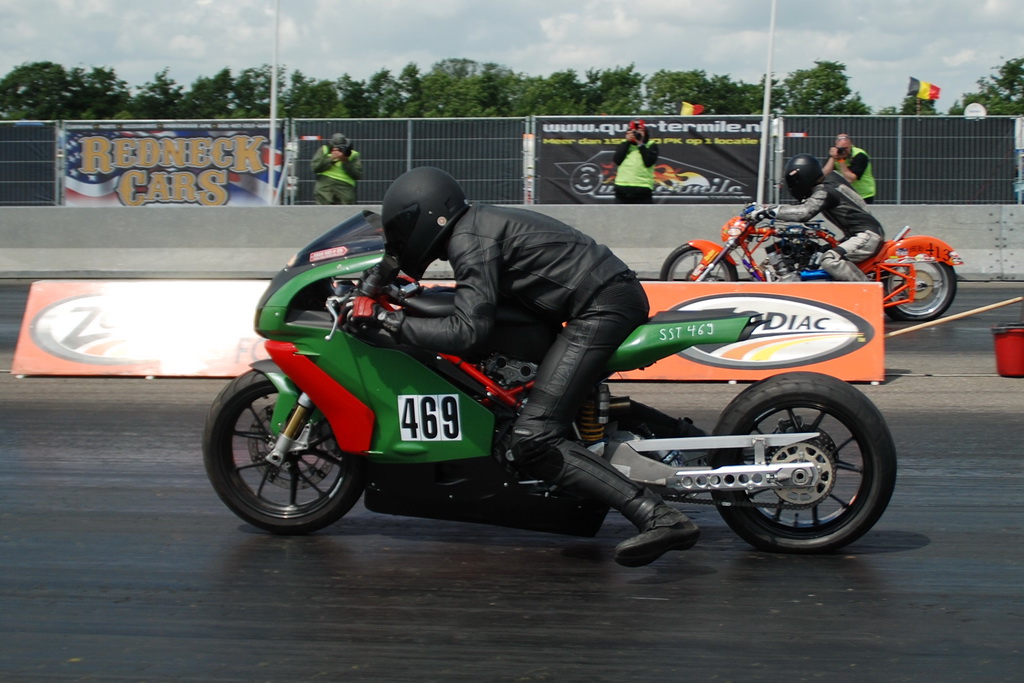 He competes in Superstreettwin class if he is not working the topgas Honda that Peter Niklas rides this year.

Simon Lewis arrived late at the track, and parked at the spot where the topgassers were situated the last last time when he was in Drachten, at the south side of the track. 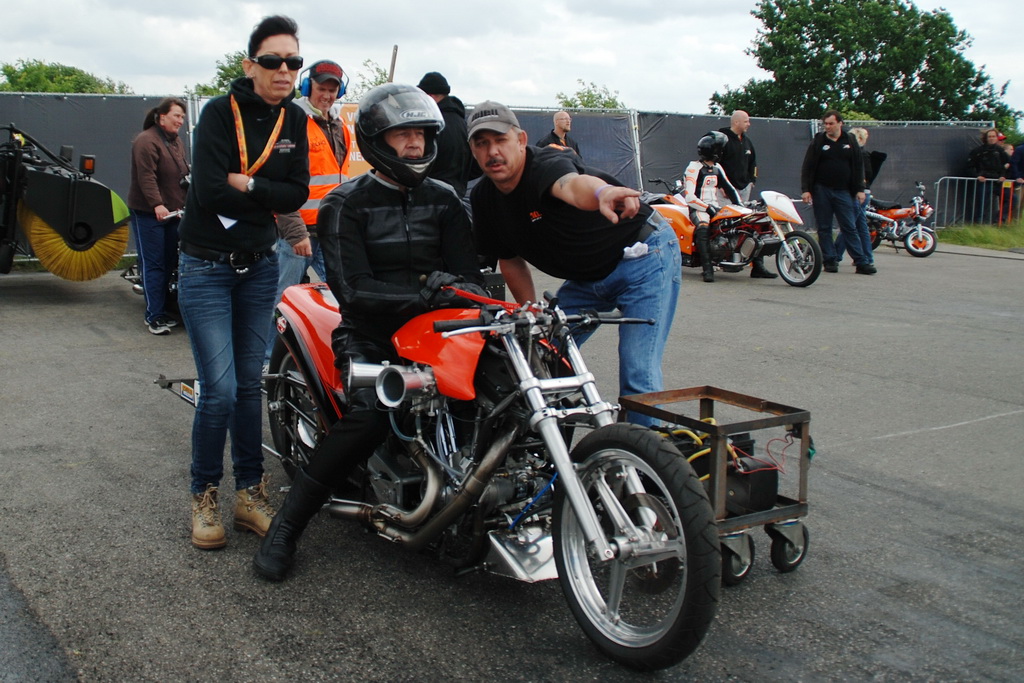 Now the class has been given space at the north side, ideal in wet conditions to be close to the exit with a heavy truck, camper or trailer. 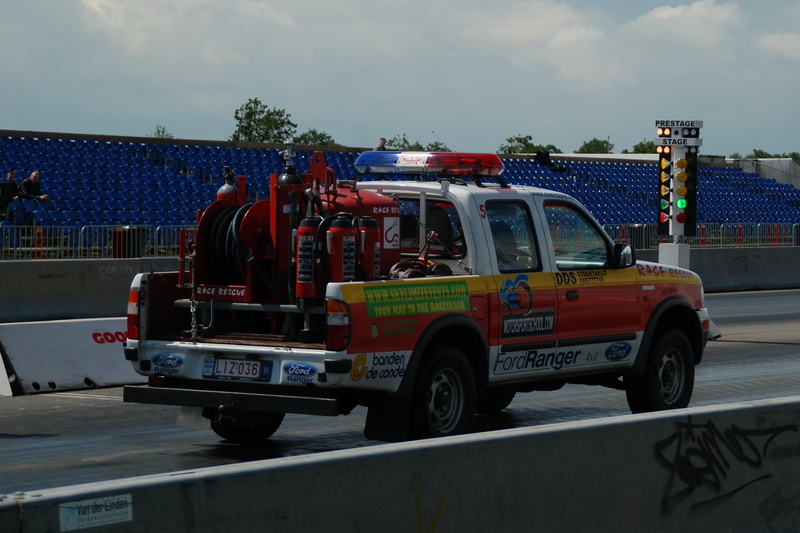 Quarter Mile Events and racers club eXplosion had done all they could to make it a succes. But Pluvius ruled for most of the weekend, for the fourth time in a row! Only two pair of cars ran in the morning, then it started to drip. The crew started sweeping the quarter mile track and the rest of the airstrip, to try and create the best conditions for acceleration, while fresh showers kept coming in. Late in the afternoon, the sky finaly cleared up, the first call came and the line-up started to fill with race cars. The first few runs usually get a lot of attention. Lots of riders usually go see a few runs of other classes and try to "read" the track, while mechanics are try to find some clues on how to set up the chutch or wheelybar. This time they also got to see this awfull meteorological phenomenon: 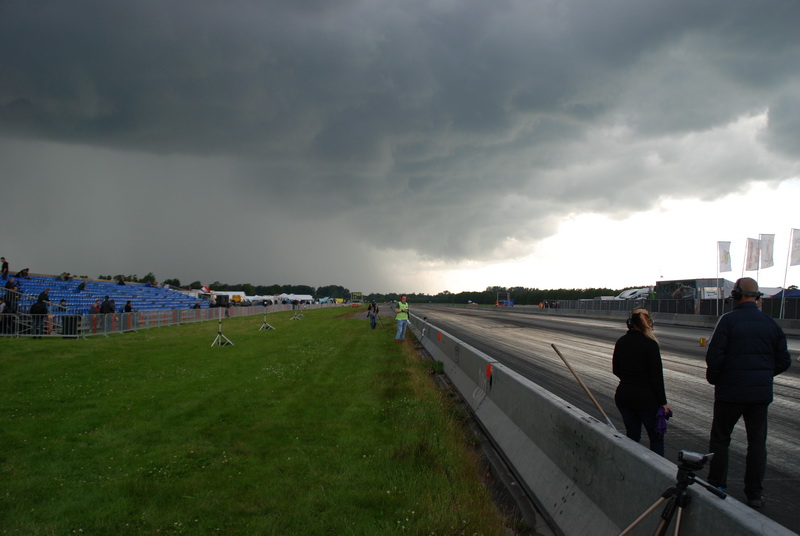 Milan Kolacny, who lives near Prague and his Czech team are regular visitors of Drachten so they have seen this before! That cloud could only mean only one thing: It's Hammer-time! 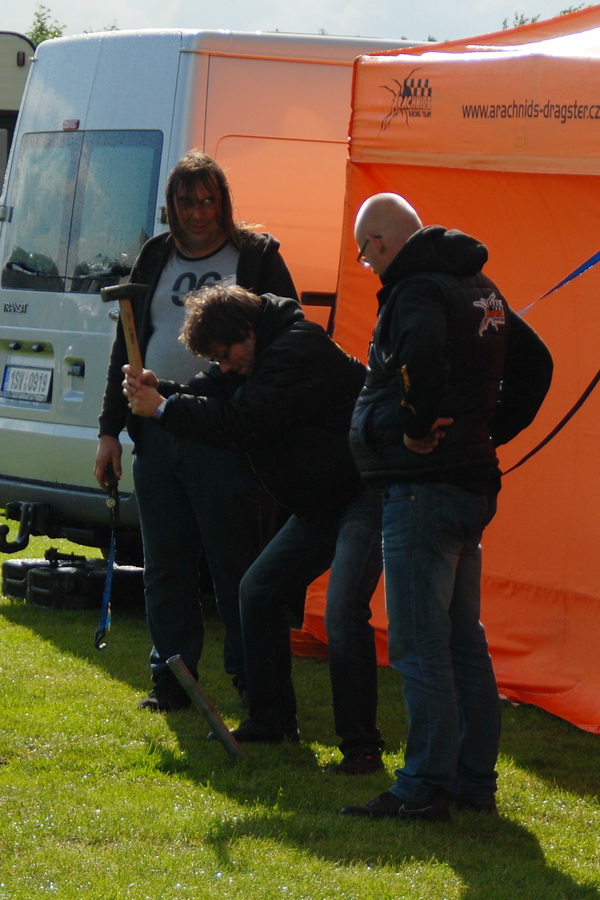 Milan was close behind the leader in the championship all season last year, and now again starts as the chaser. He was not able to ride at the first race, and needed suitable rubber for the rear wheel badly. Now the blown Honda Twin was ready to go and so was the team. But they had to wait untill the next day to qualify. 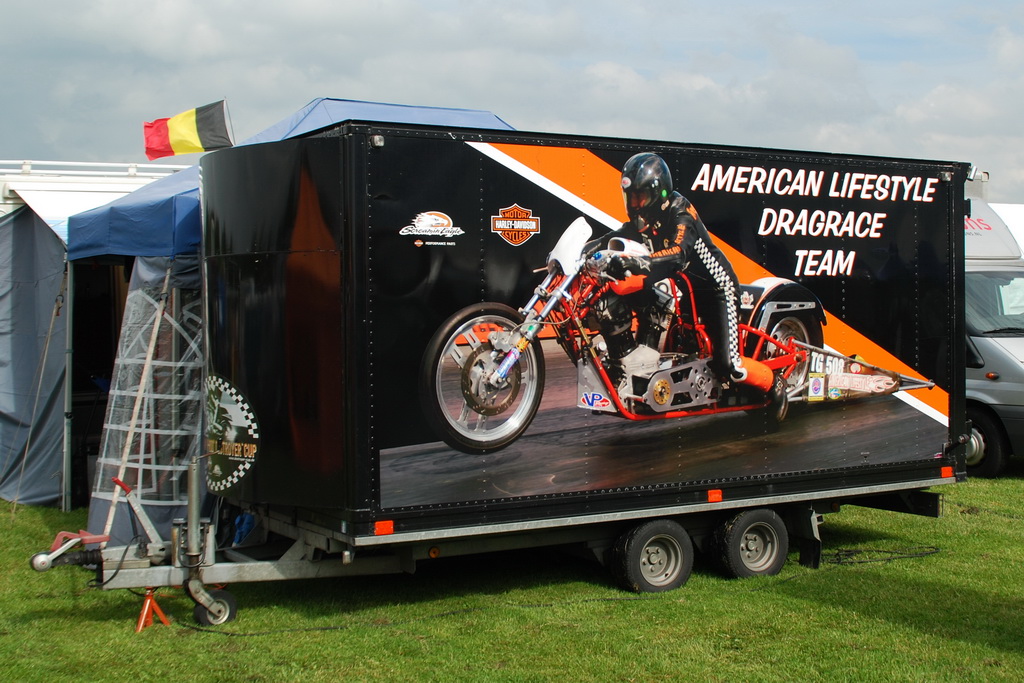 Chris van Nimmen from Antwerp also was in demand for parts and skipped the first race too. But he managed to get some prime belts just in time. He invested in a Sixpack gearbox, and the engine, changed the frame, air intake, fuel system, and the position of the handle bar. 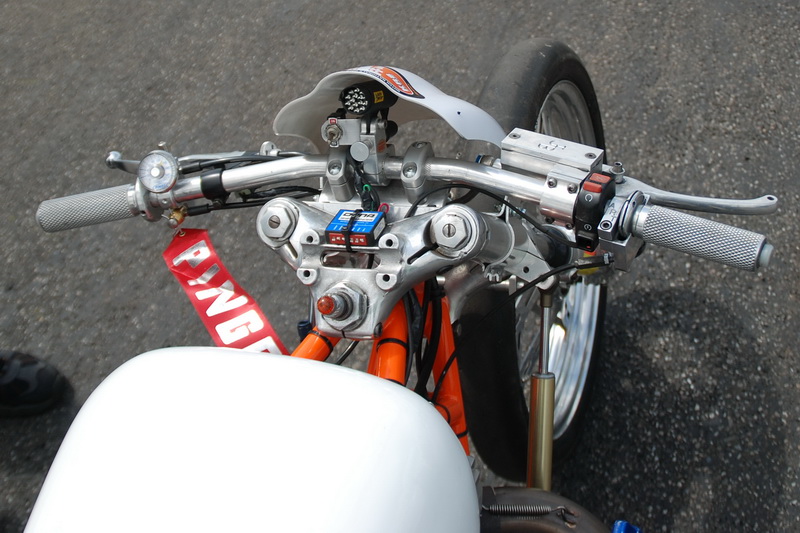 Now the only thing he needed was track time. Find a baseline setup, get used to the new riding position and to shifting gear five times . All focussed and charged for the moment after months of preparation, he was very disappointed with the rain. Good thing he could find comfort with many fellow sufferers at the 20th birthday party of Jonas Raeymaekers. The Belgians behaved like they owned the place and loud music was heard till the till the wee hours. Captain Germany was in charge of the nightshow but still needs to practice his stunts:

Still nobody complained the next morning. It was dry and racing started early. 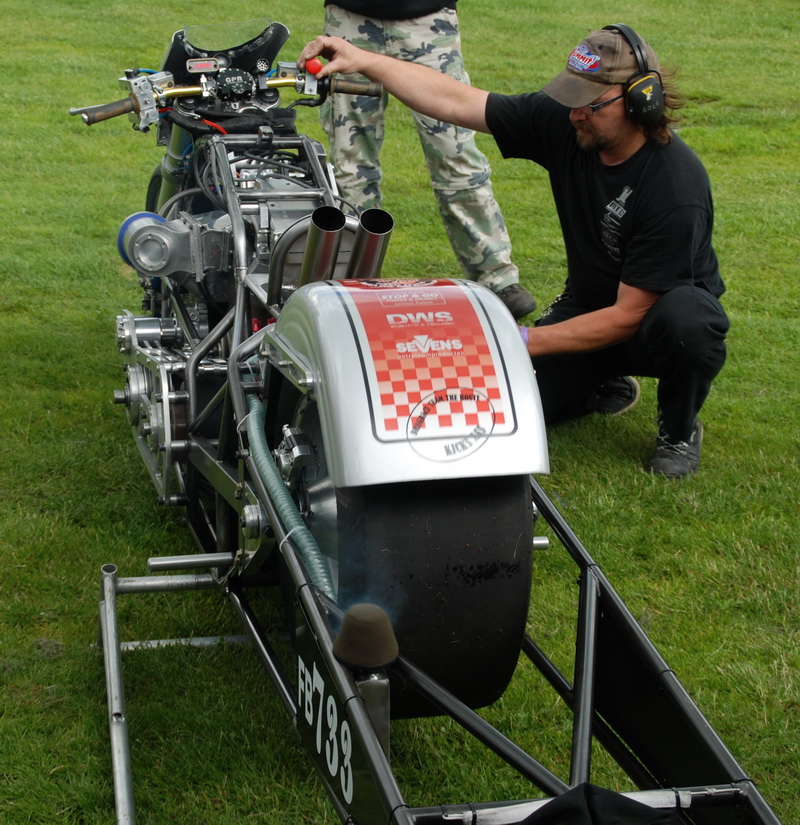 Marc Vandenboer went from the Supertwins to the Funnybike class after changing from gasoline to methanol last year, and competes in the new european EDRS funnybike serie. Marc is very optimistic about the possibilities with methanol in his blown Harley, and his chances against the four cylinder bikes. 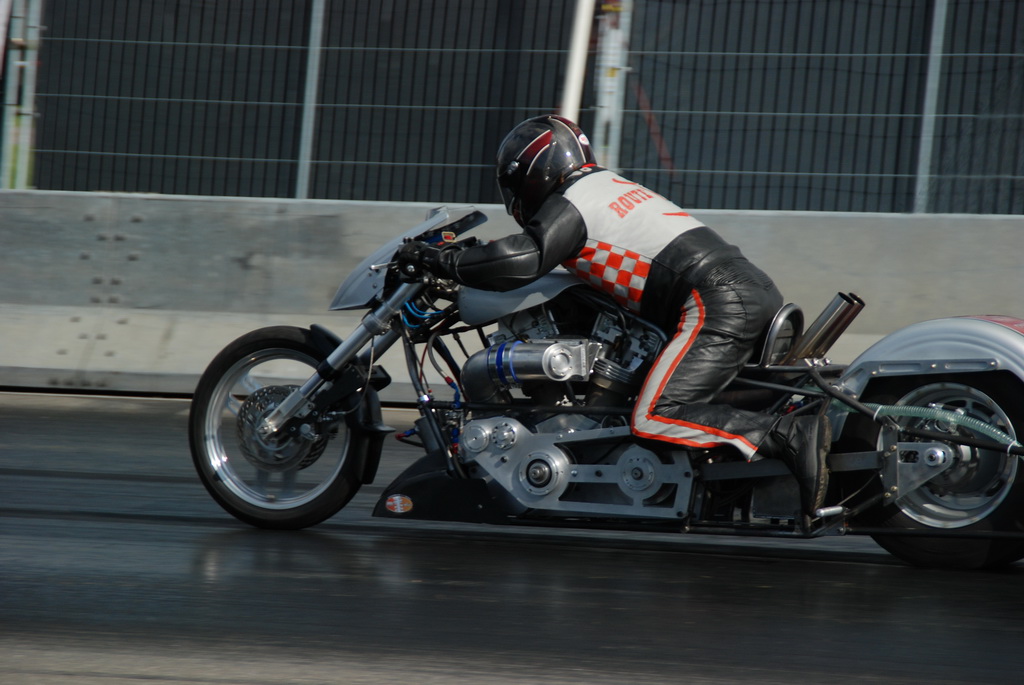 Marc left strong at his first attempt, but broke the prime belt.

The smell of nitromethane was in the air when Daniel Kerkhofs fired up his bike. 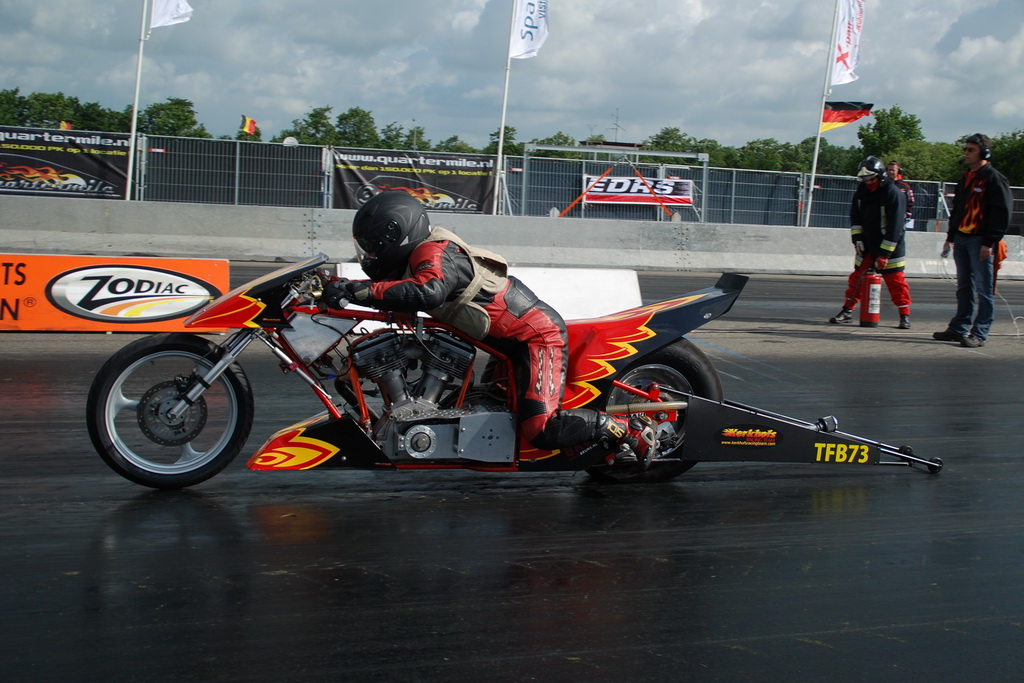 He´s competing in the Nitro Bike class. Too bad had no opponents. 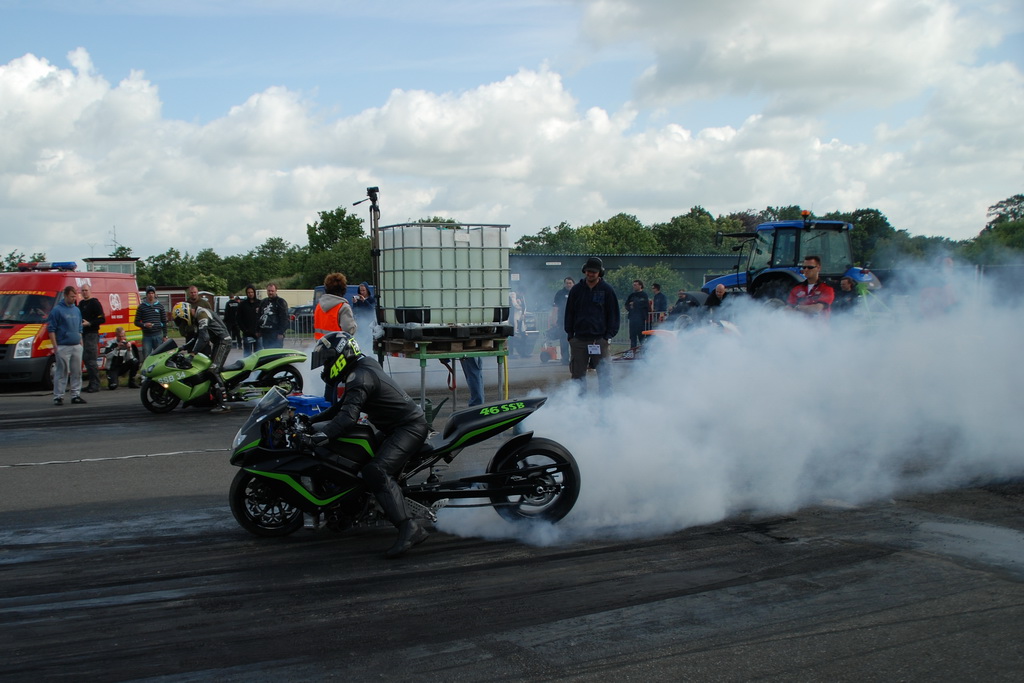 Half past ten the Supertwins were in the line-up and five minutes later the smoke of the Superstreet bikes cleared up, and they were allowed to start. 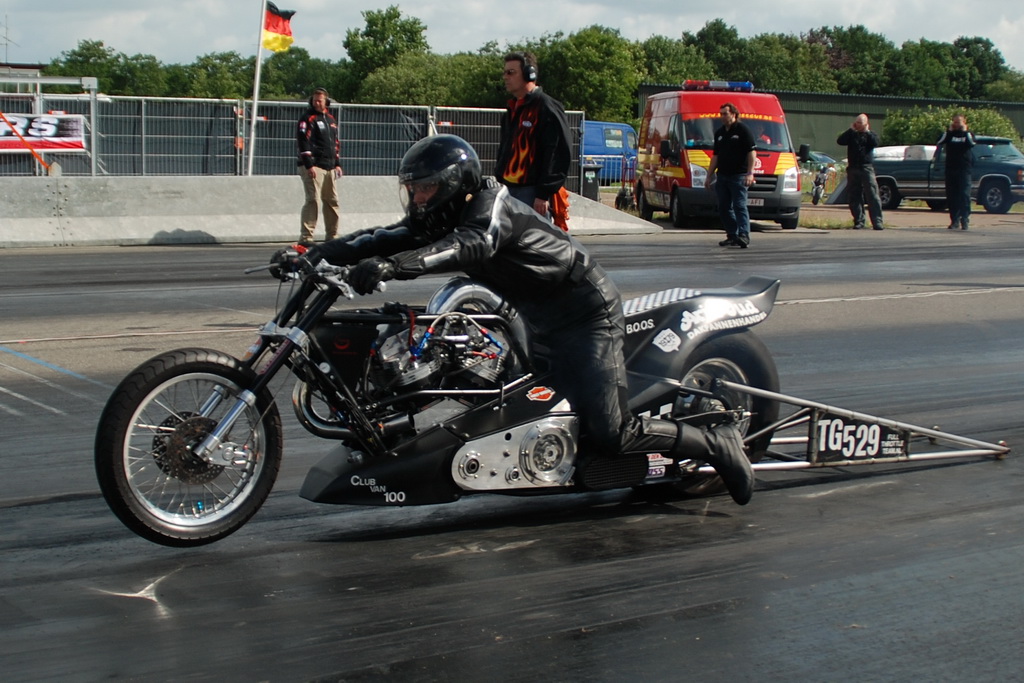 Van Schie and Kolacny formed the first pair, the supercharged twin engines sounded loud when they left the startline. Both riders had a good launch, and Milan managed to pull it through, 8.5 sec and 246 kmh, a great way to start the day. 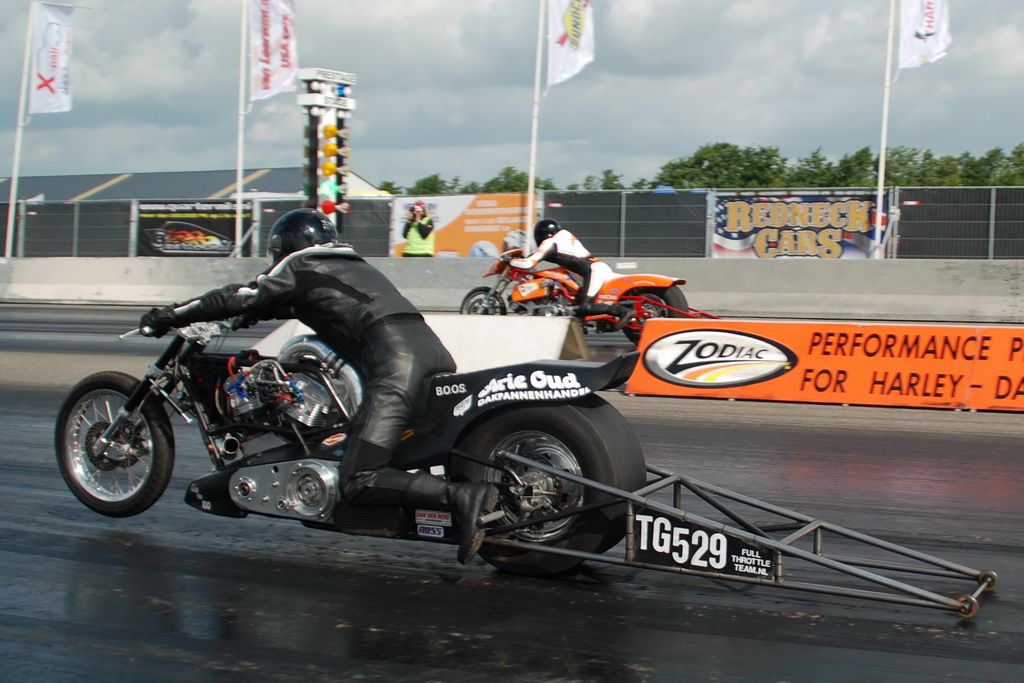 Harry was less fortunate, he noticed a problem while shifting gears. He didn't want to force anything by trying again, but pulled the clutch and let it roll. He passed the finish in 9.98 seconds at 136 kmh. 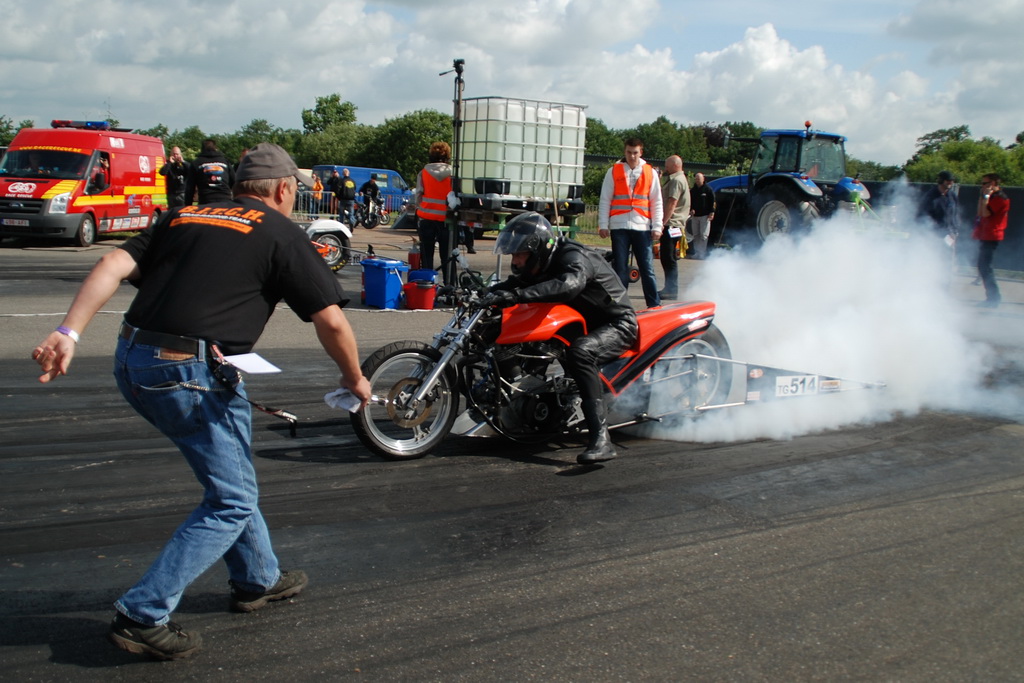 Next pair Lewis and van Nimmen. 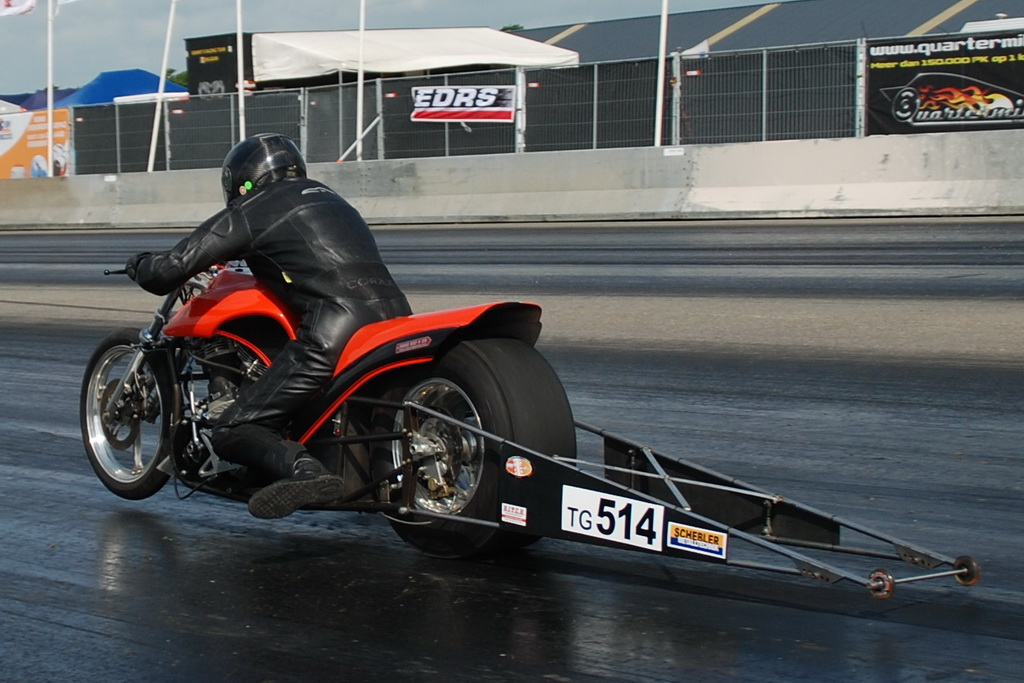 Lewis first to lift the wheel, but Chris had already caught him at the 60 foot mark, and finished in 9.400 and 236 kmh, good for second place so far. Lewis' bike produced a cloud of oil at top end. 11,66 sec, 130 kmh so a lot of work still needs to be done. Last in line was Peter Niklas. 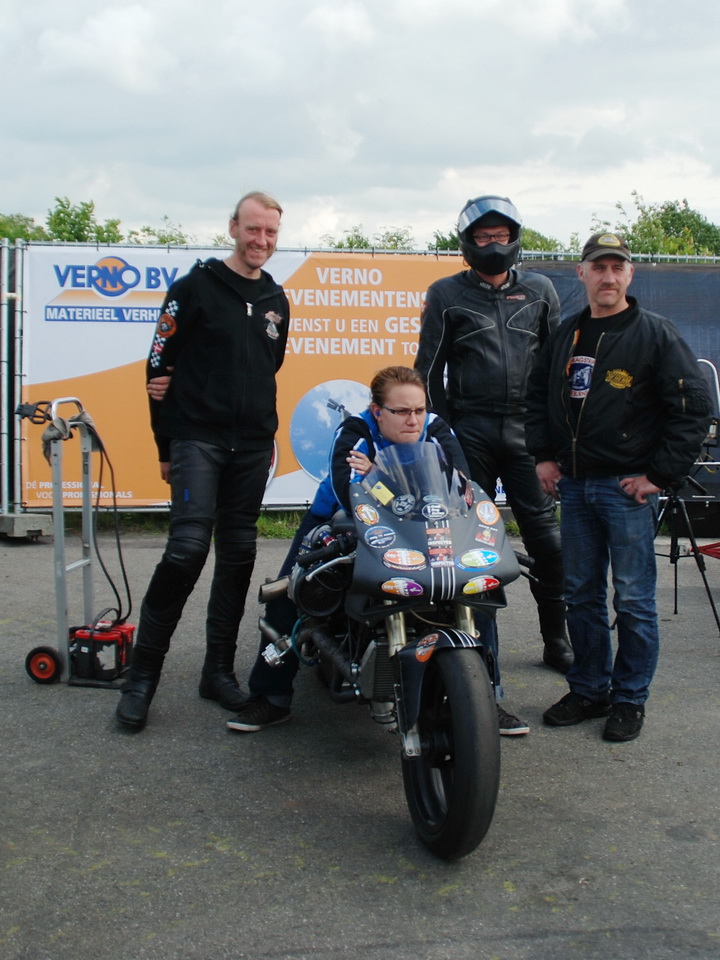 After the cylinder head problems and conrod failure in Hoskovice the team brought a spare engine and thought they were prepaired for the worst, but now the electricity is letting them down. A Gremlin switches off the bike at an unpredictable moment. 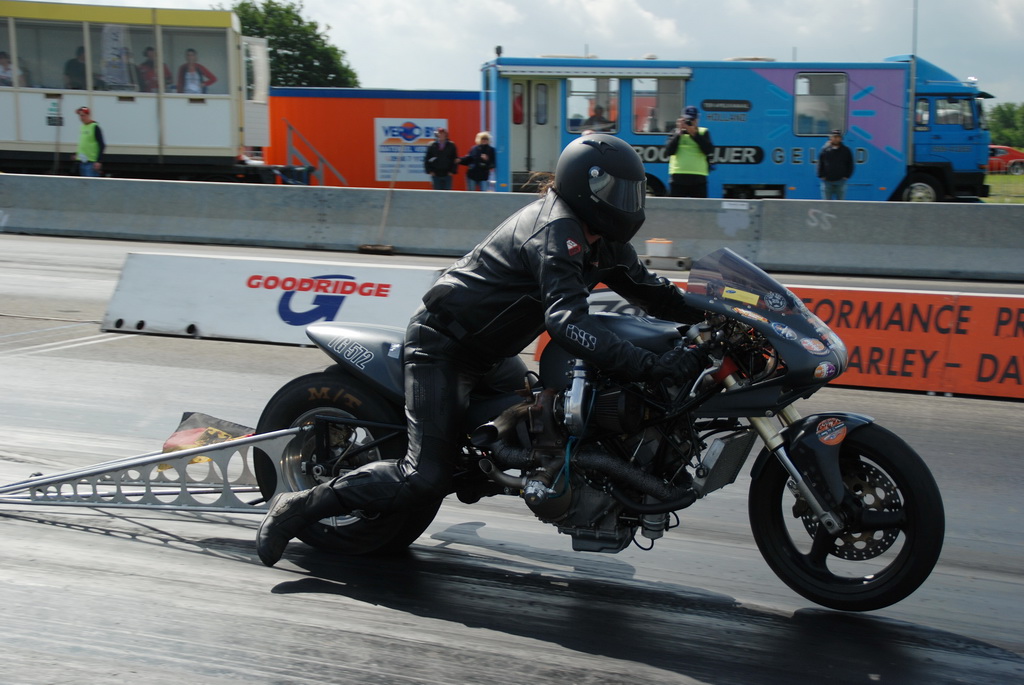 Peter and Christian were far from happy with 14.666 @ 124 Kmh. So they continued their search for the cause of the problem. 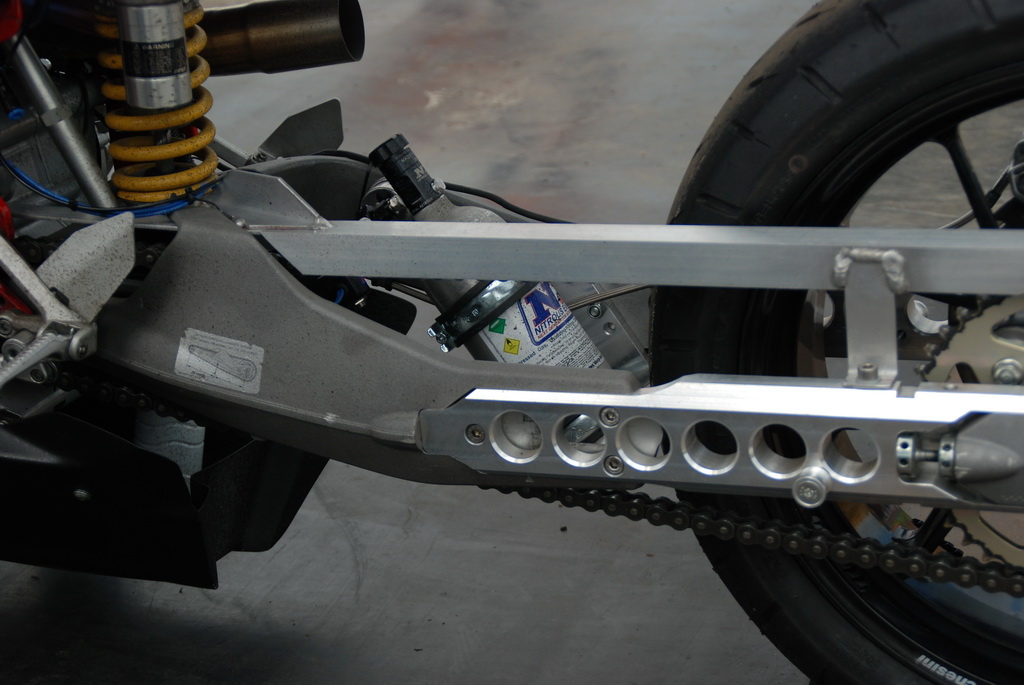 Christian took a break from that and raced at half past eleven, while his opponent Joerg Lymand was still wrenching. 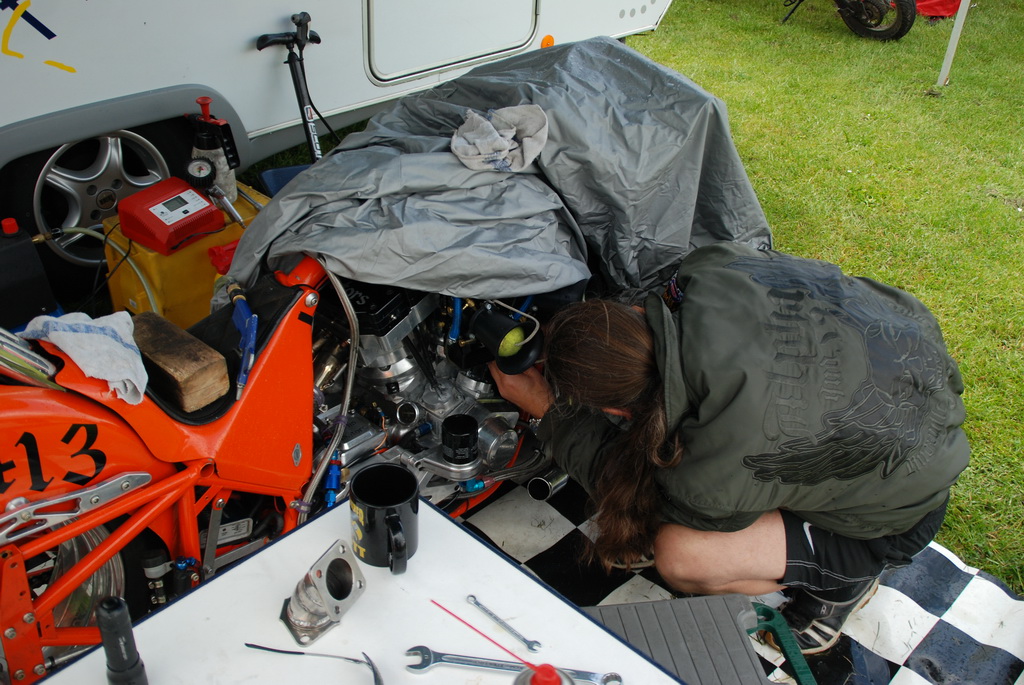 At a quarter to twelve the youth occupied the strip. Fun for the whole family. While the other bike classes are shrinking, it's hopefull to see that the Junior drag bike class grows. There were seven kids on the entry list. Harry van Schie's son Gijs, and Mitch de Haas are the veterans in the class. Gijs outgrew his dragbike, and has 250 Honda now. Demi van den Belt made her debut, she's the daughter of Funnybike Jeroen van den Belt. Two teams of car classes also have a kid competing in Junior bike, team VooDoo Hemi Racing's Luk Harteveld and team Orange Country's Cooper van de Mosselaar, both with a 50cc. Young Cooper stole the show with a good reaction and this wheely.

He became the #1 qualifier and later advanced the the semi's.

Funny bike ran for a second time, Marc van den Boer's bike lost a pushrod at the second half of the track. Marc improved, and went to place #4. 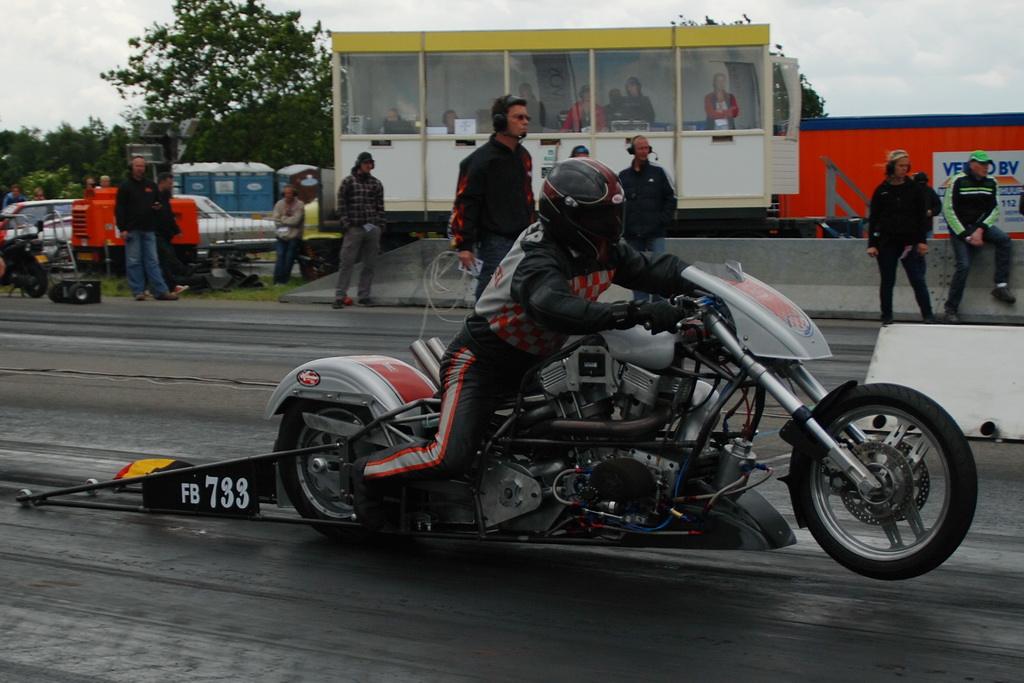 Then a Superstreet bike spilt all it's oil on the track, so more delay. 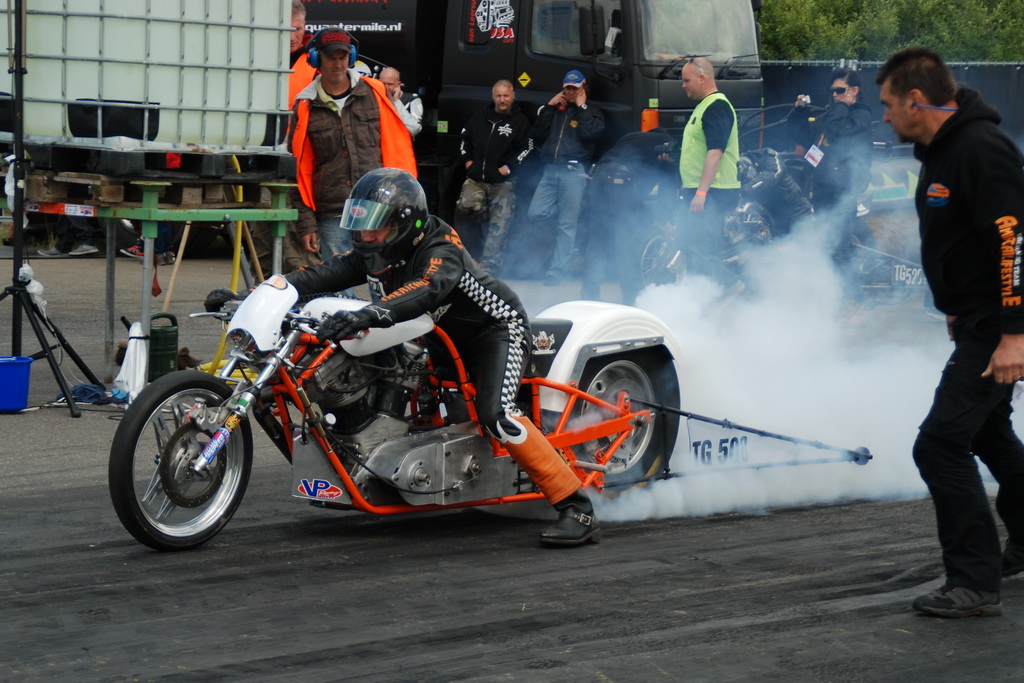 Both Simon Lewis and Chris van Nimmen did better in the second round, 11.1 for Simon, and a 9.0 for Chris. 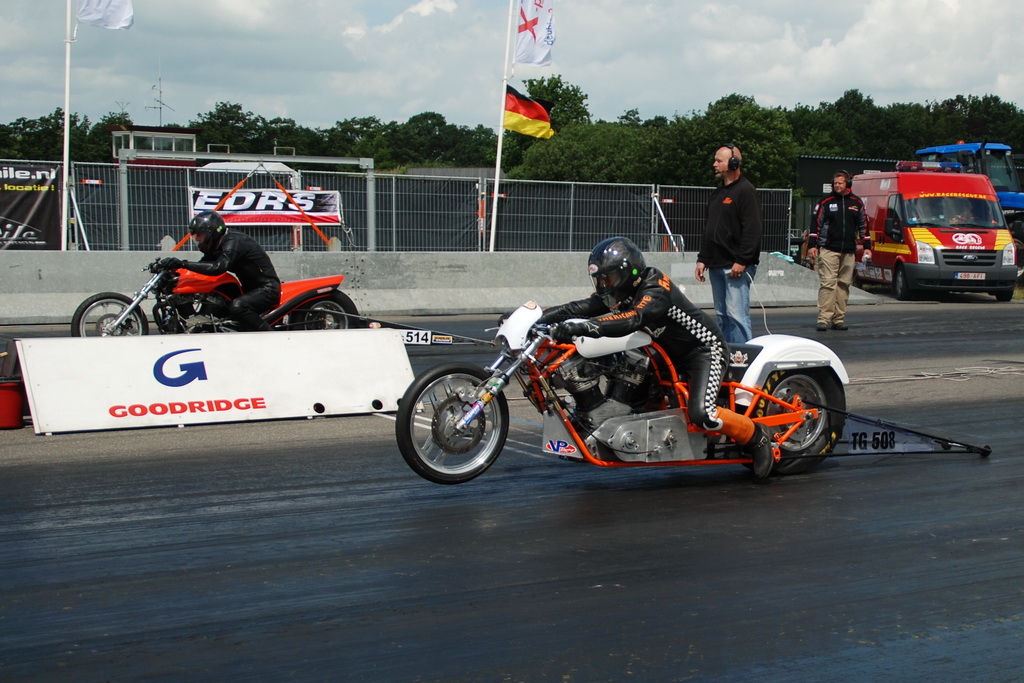 Harry and Milan did not improve.

The domino theory and the theory of probability both apply to the accident that took place later that day, when a car got out of controle, half way down the track and caused more then a quarter mile of guard rail to fall over like domino bricks (watch a film clip here). Three years ago the guardrail fell in the right lane, now it was the left lane. So another delay, the guardrail had to be erected, and certified again so the company that set it up was called. To speed things up, many volunteers came to help (at their own risk), then, three, two, one: 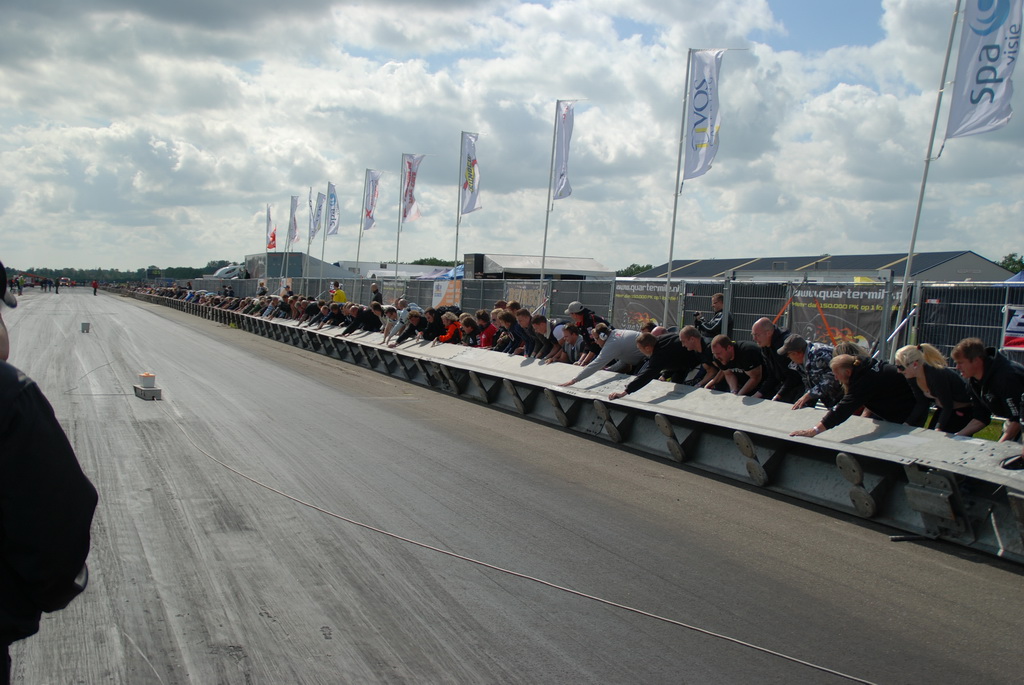 So racing continued at about 18.00h. The third qualification round was cancelled, and eliminations started. But things went far from smooth, some cars went out of controle at top end, a big oil spill, so more precious time was lost. 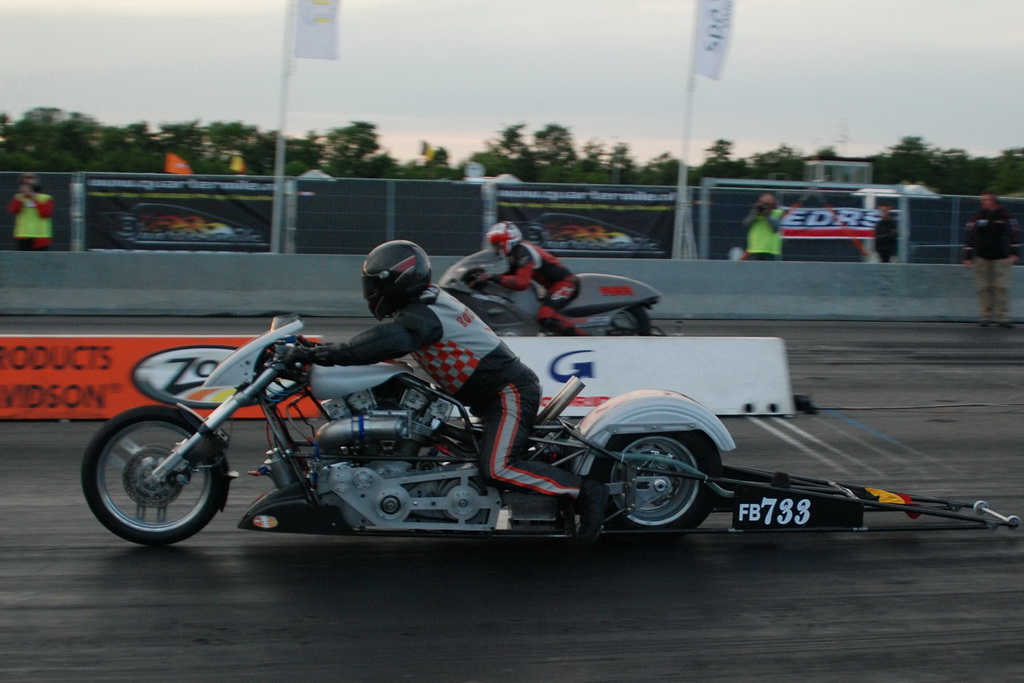 The Funny bike ran their quarter finals, and Marc Vandenboer beat Jeroen van den Belt, and had the company of Joswig, Raaymaeckers, and Fagan in the semi's.

In SSB the former owner of Lewis' bike, Michael Merse reacted a lot better then his team mate Michael Kaupat. 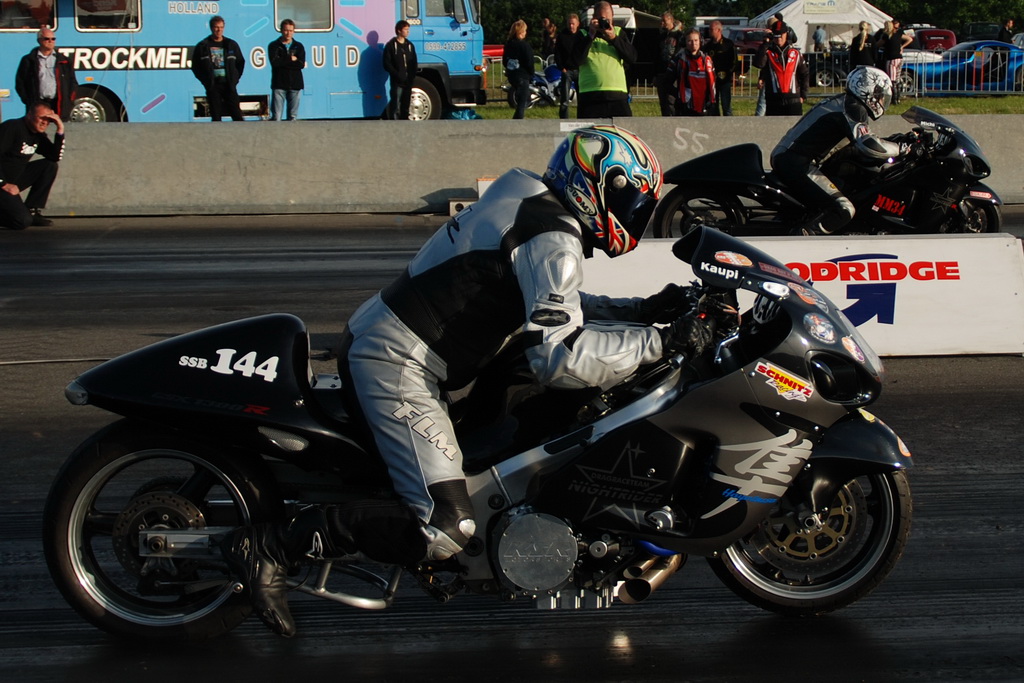 Then time ran out and racing stopped at 22.20h.

Sunday morning at 5.30 the rain came again, and it never stopped. 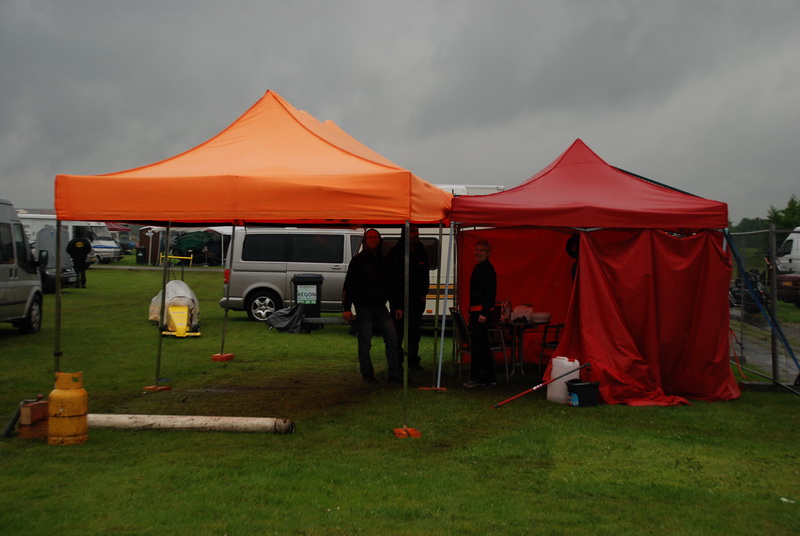 So everybody packed and went home. A few days to dry up, and then off to Bechyne, Cz for the third round of the serie.