Race # 4: The Nitrolympx at Hockenheim, Germany. 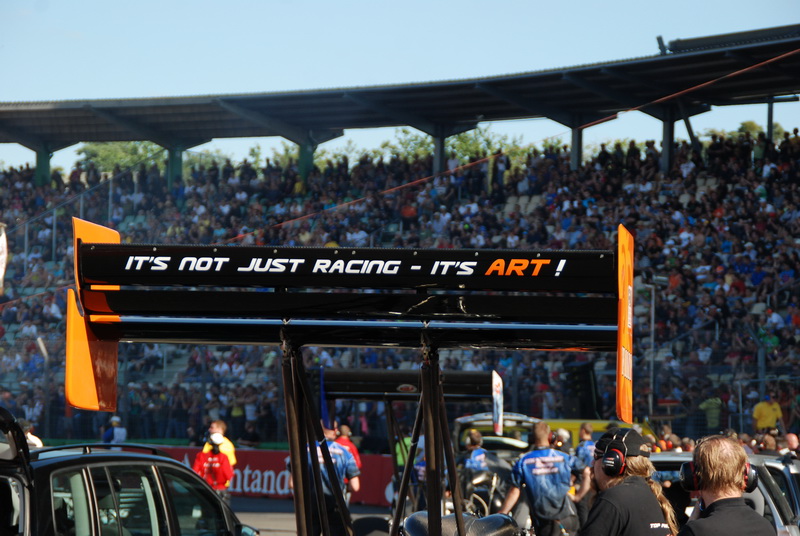 It should have been race #5, but Drachten 2 cancelled, so most riders had to wait for a few more weeks, while some went testing at other locations.

Great weather, not a drop all weekend, sunny, with a little breeze to prevent the place to turn into a baking oven. The expectations were high before the event, and so everybody was very disappointed when they saw the track.
All the rubber had removed from the surface of both laners over the full quarter mile. The situation was so bad that the UEM-bikes and FIA cars did not run on friday. They decided to wait till the "sportsman classes" had put some rubber on the track. So the topgassers were allowed not two but three qualification rounds that day, and another one on saturday morning. But it was almost impossible to set a decent time.

In STTG, there were nine riders present, and veteran and champion Herman Jolink was the best at dealing with the bad situation during round one. He started with a low RPM, before completely opening the throttle. So he landed on top of the list, and nobody was able to pass him untill sunday. This year no fast Scandinavians on the topgas entree list, but a well known ex-topgas champion's bike instead. 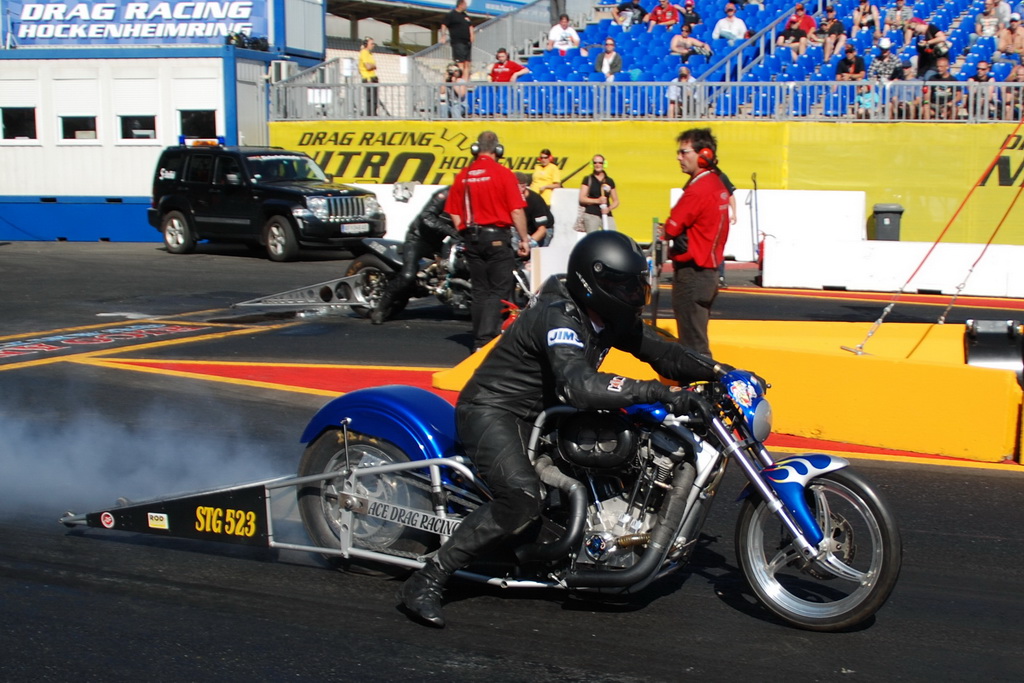 Charley Abrahams from France is the new and proud owner of Ricardo Giliberto's S&S Sportster. He was first in the line-up, along with a highly motivated Simon Lewis. watch the first round below. 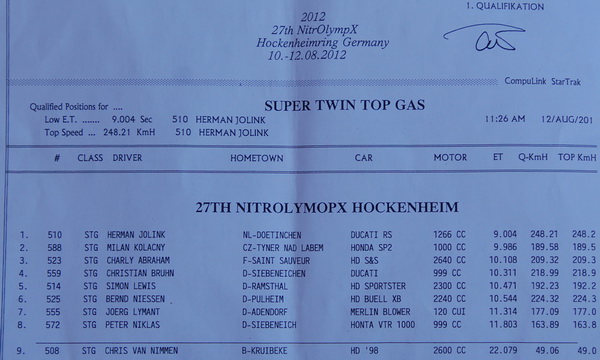 Watch the second round below. 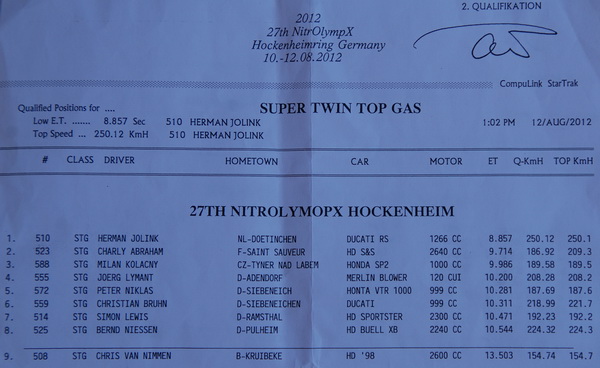 Herman Jolink sharpened his score, and was the only one with an 8 on the clock so far. Charley Abrahams improves and passes Milan Kolacny. Chris van Nimmen suffered a dodgy contact at of one of the injectors, and but was not yet qualified, so he got to the end on one cylinder. Then made a big jump forward in round 3 to land on spot #4.

Team Sideburns from Hamburg had two irons in the fire, as Christian Bruhn fitted a wheelybar and slick in his Ducati 999 that he earlier raced in the SuperStreettwin Class. In the third round he lined up beside his team mate Peter Niklas on turbocharged Honda, and made a nice rolling burnout. Watch round 3 below.

Charley Abrahams improved again, But Milan too, and took back place #2. 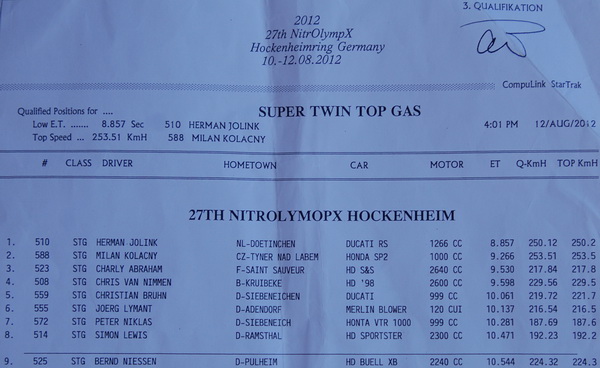 Early saturday morning a last qualification round. Nobody improved except Charley, who pushed Milan back to the third place again. 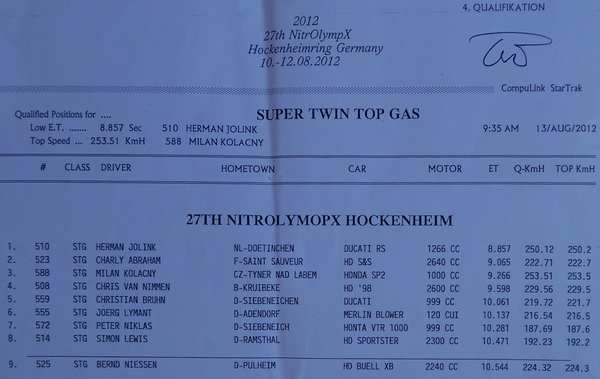 Peter Niklas set his personal best in Hochenheim 2010, but did not come anywhere near it now. 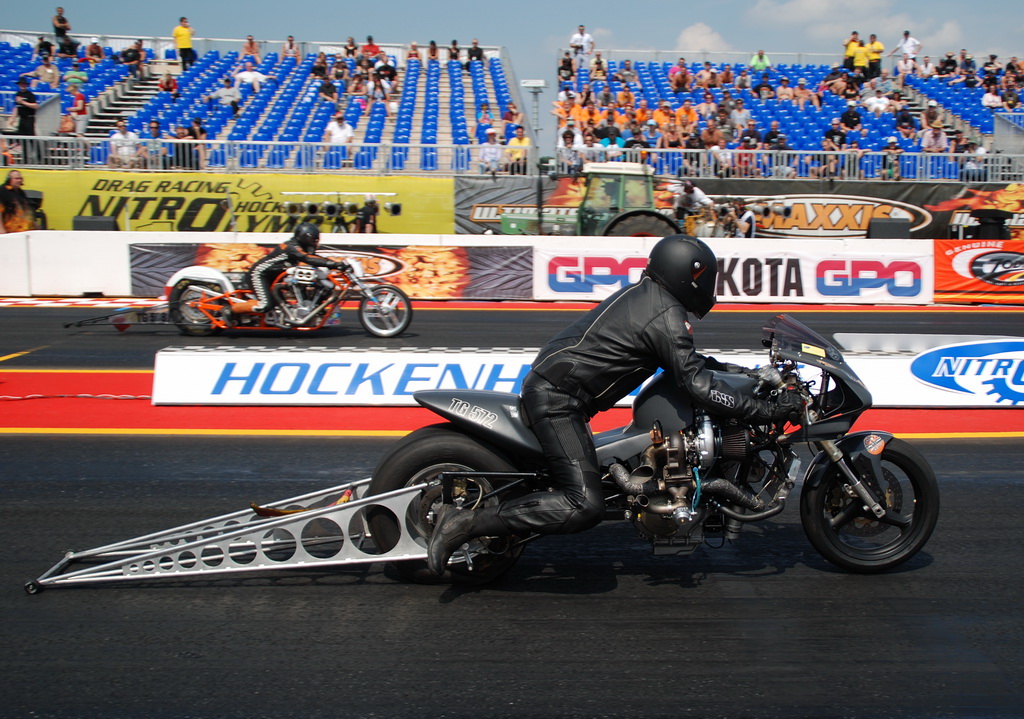 Team Sideburns swapped the engine of the Honda after that, 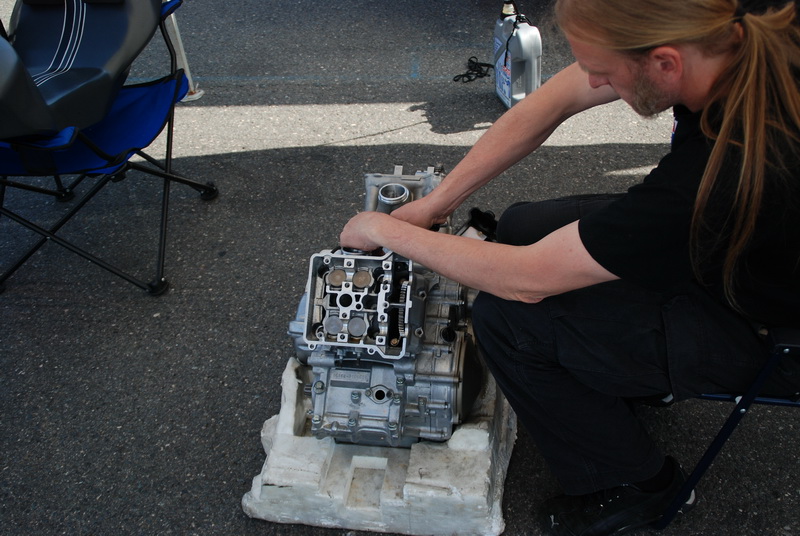 and prepared the Duc for the dragrace the next day. Lewis checked his clutch and gearbox and repaired his broken shifter. 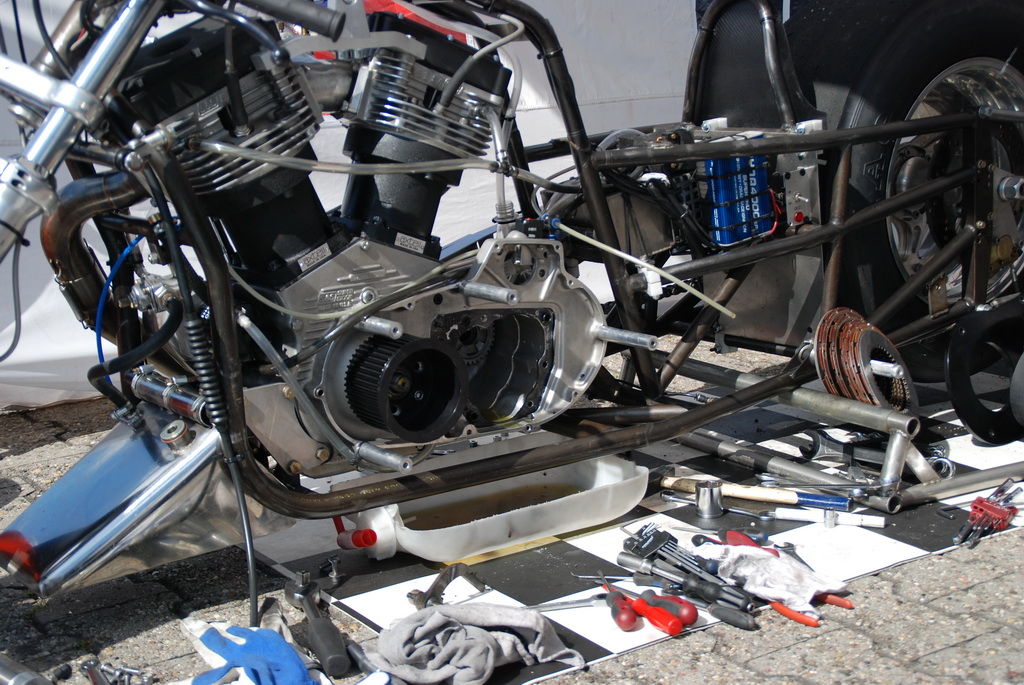 The UEM-bikes and FIA-cars ran for the rest of the day, but their results were also very poor. The quickest biker all, Peter Svensson, usually capable of doing five second runs, qualified last in the strong 8-field of top fuel bikes. After I saw the first pair of top fuel dragsters doing 11 second side by side runs that looked like quarter mile burnouts, I left the grandstand to check out the activities in the pits. There I saw my old buddy Ian Turberville sitting on the front wheel of Canadian Nate Gagnon's Topfuel Supertwin. 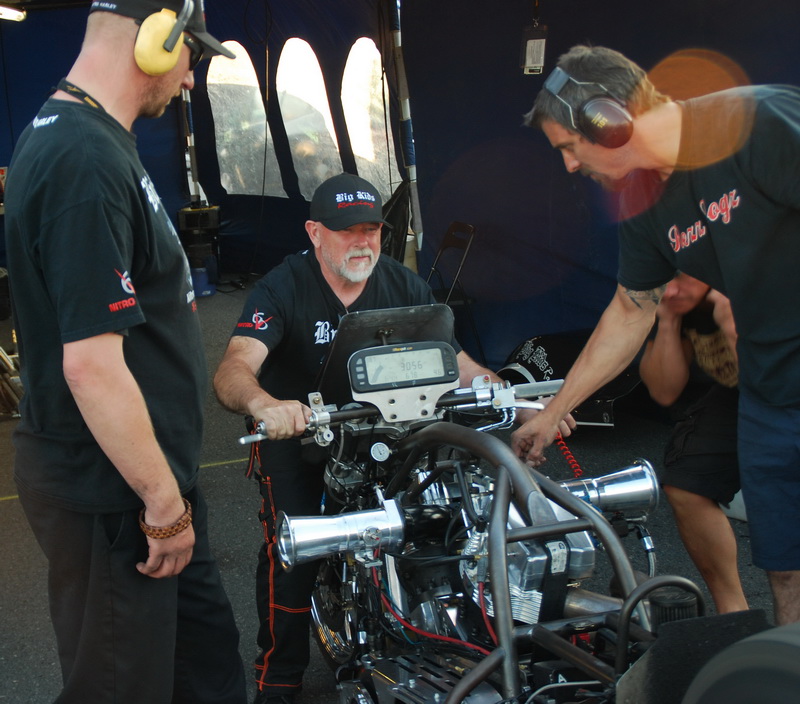 And I had a look close at Hans Olav Olstad's new parallel twin by Puma engineering. It was an unfinished project started by Gerard Willemse, till Olstad knocked on the door last year. Hans Olav sold his old bike easily and fast, so he and Gerard worked hard to get it on the strip. 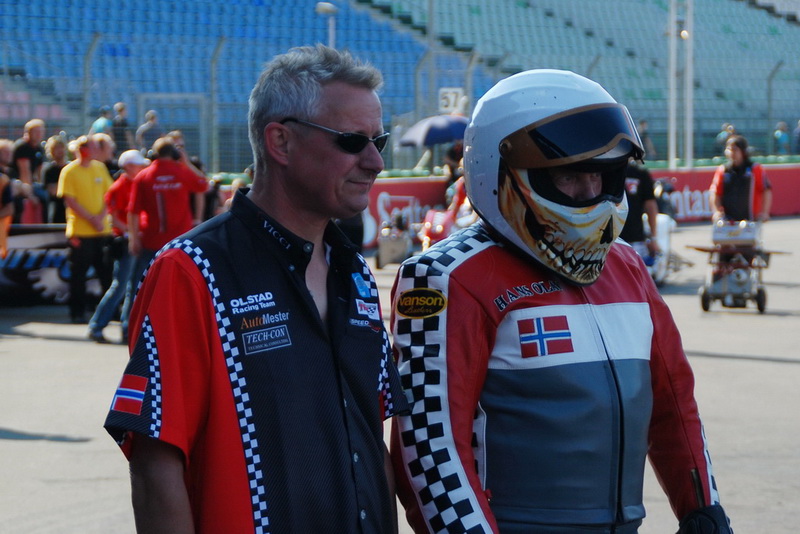 They were allowed a test pass on friday evening, where I heard the engine roar. 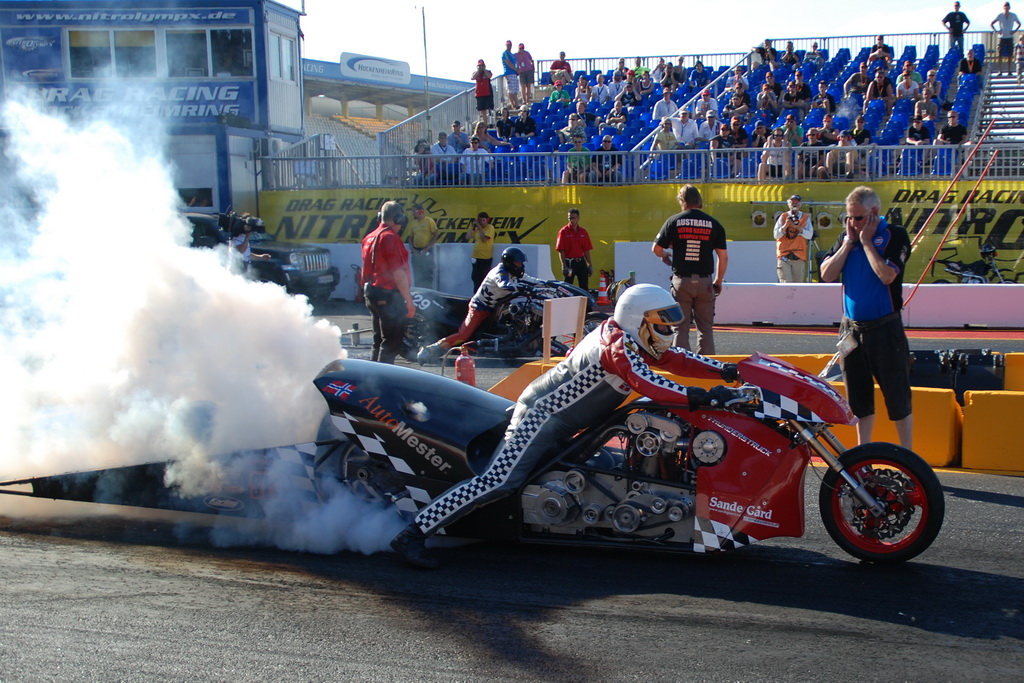 But a fuel leak after the burnout made Hans Olav to shut it off. Our former champion Roman Sixta also made a test pass on his white Fast Cat to figure out the right setup for the track. 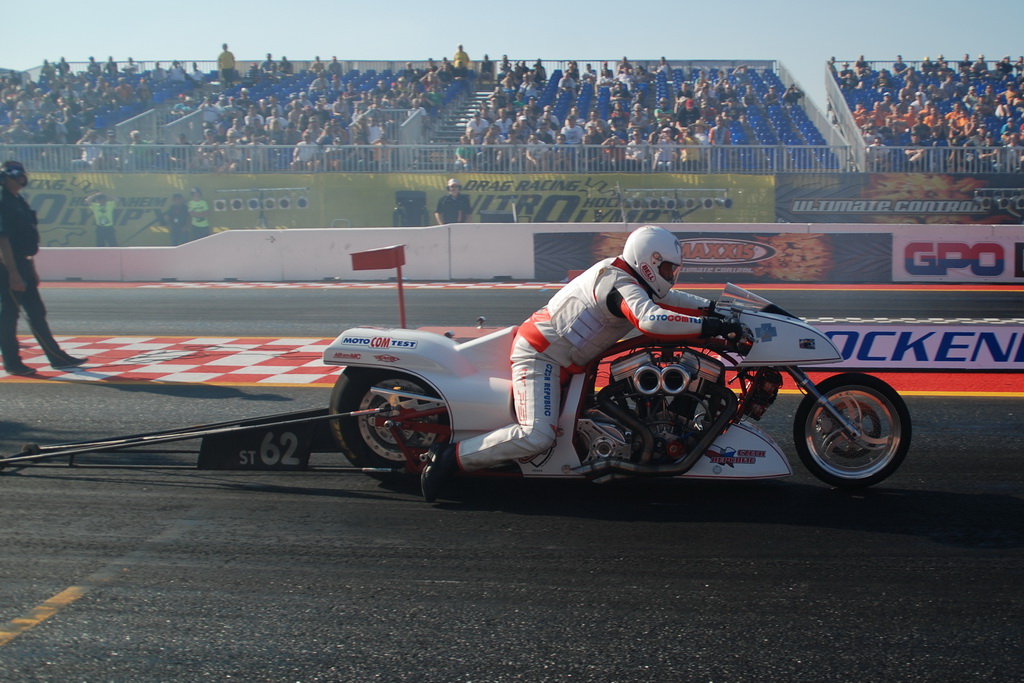 Olstad and Sixta were the only fuel twins who tested, and both made it into the semi finals. Well done, boys!

Sunday morning topgas quarter finals started with a big upset, when the underdog took out the champion. 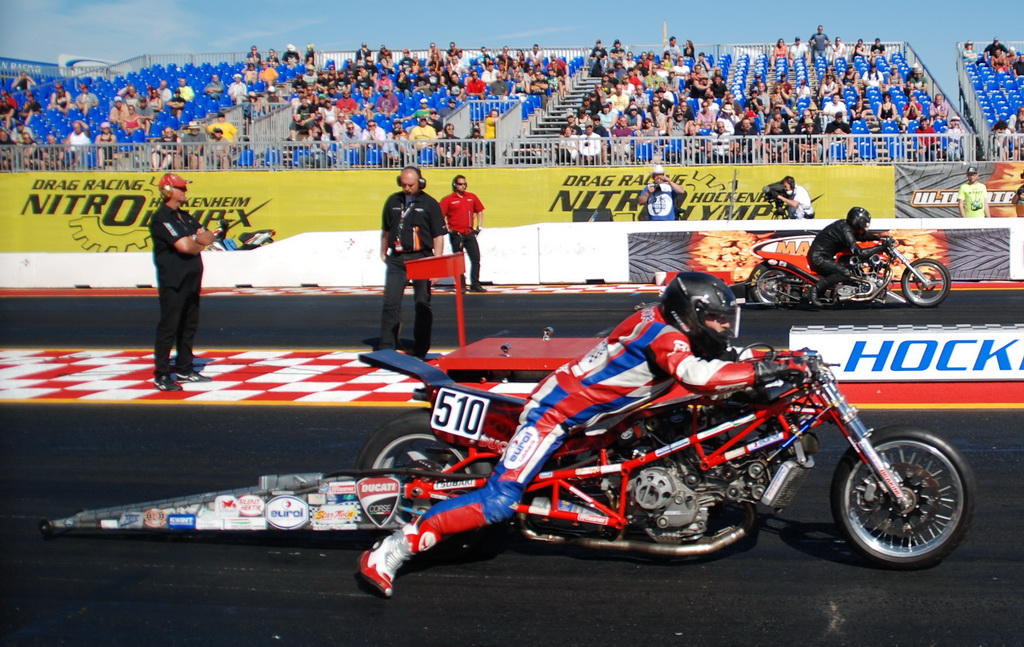 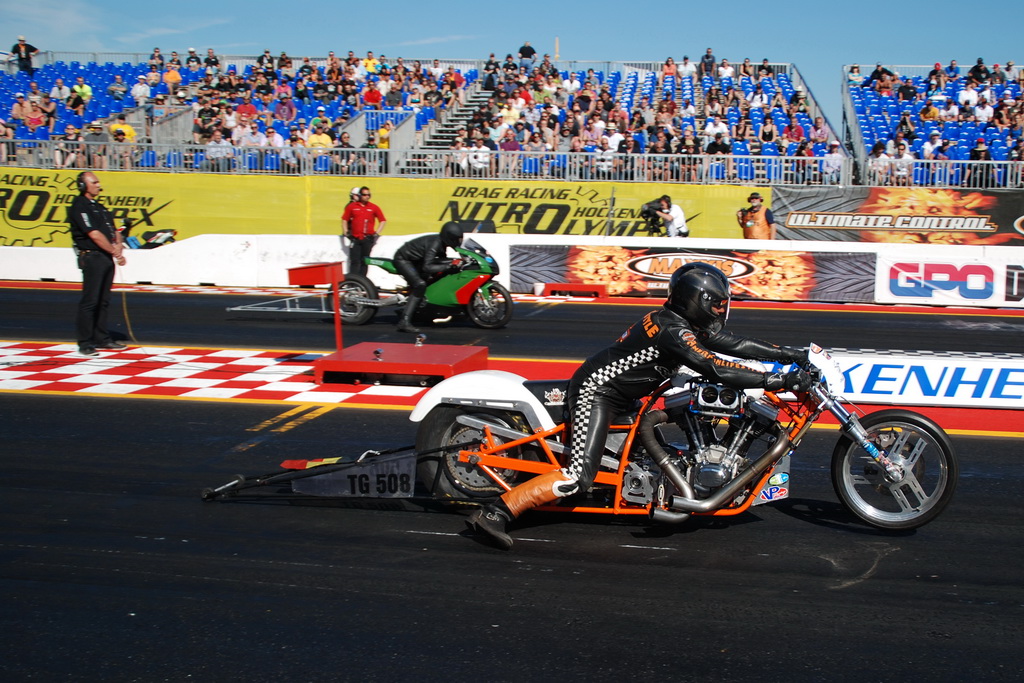 Chris probably revved up too soon, then his slider clutch locked up. So Christian went to the semi's to meet Lewis. Third pair, Peter Niklas could not make a burnout, so Niessen came in as the alternate. 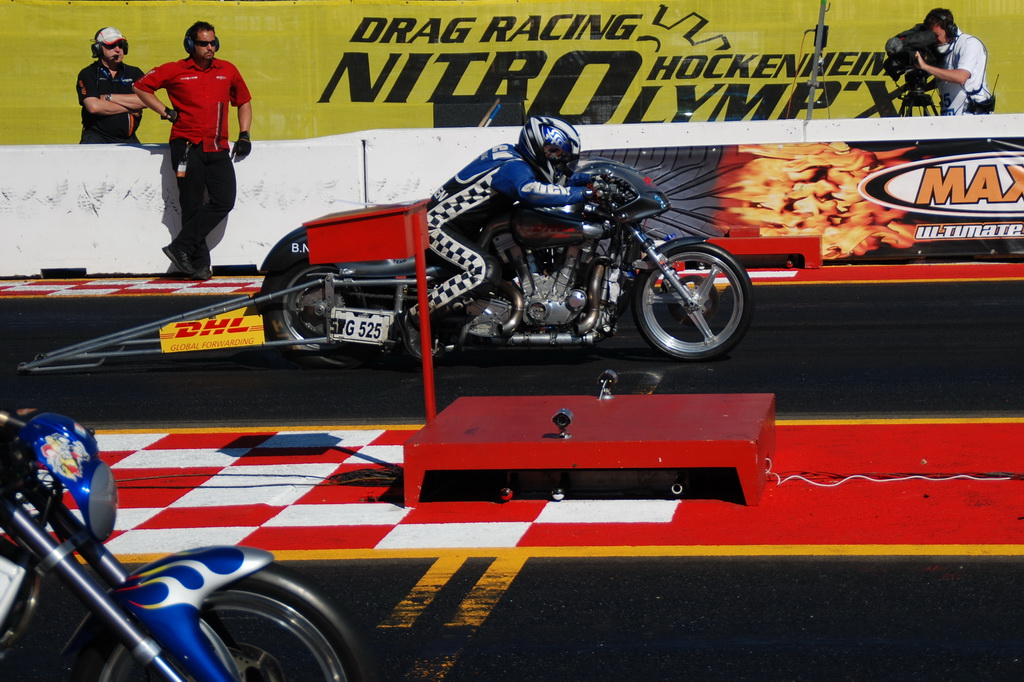 But Bernd's blown Buell was way too slow for Charley. Last pair, Milan Kolacny set the lowest E.T. and highest top speed and has no problem with Jörg Lymand. Picture below: No grip, Jörg Lymand almost lost controle after the burnout. 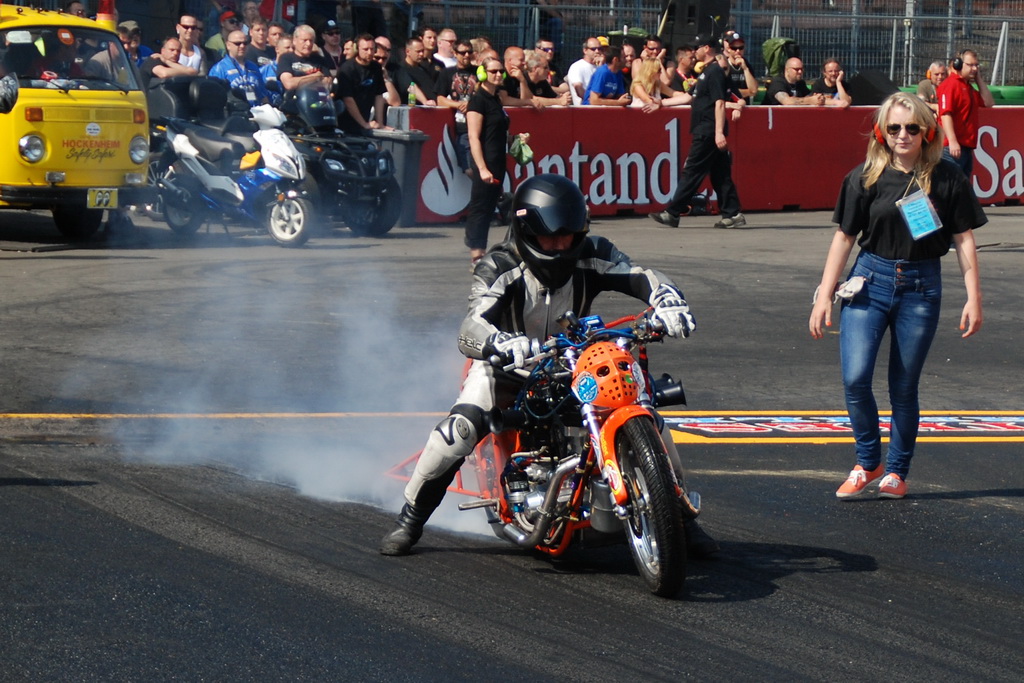 Milan scores valuable points here and extends his lead in the championship over Jolink and was greatfull to Lewis, who took out another Ducati after that. 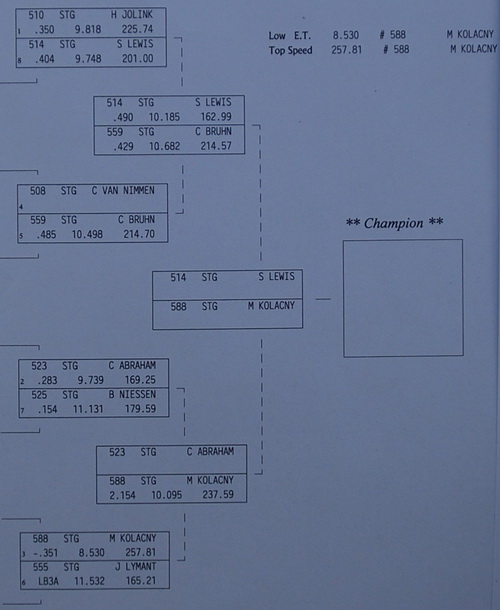 Milan had an easy ride as Charley failed to leave the startline in the semi's.

Both Milan and Simon left strong in the finals, and Kolacny had to work hard as he went out of the groove, and had to lean to stay in his lane. 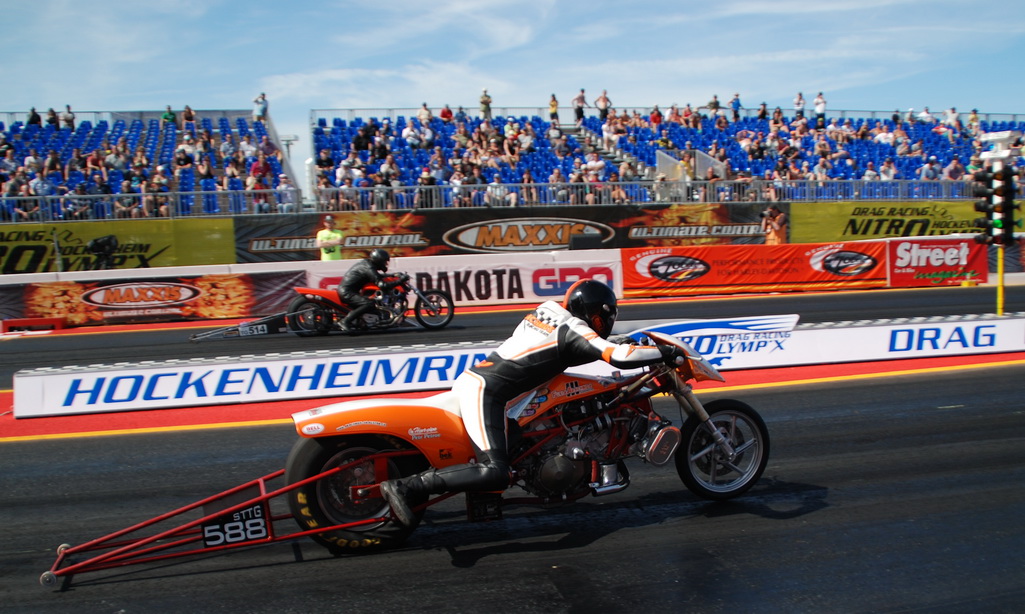 Watch the eliminations below:

That victory puts Kolacny stronger in the lead but not at all safe yet. But he won two races while the other two were rained out. That should give him a lot of confidence for the rest of the season. 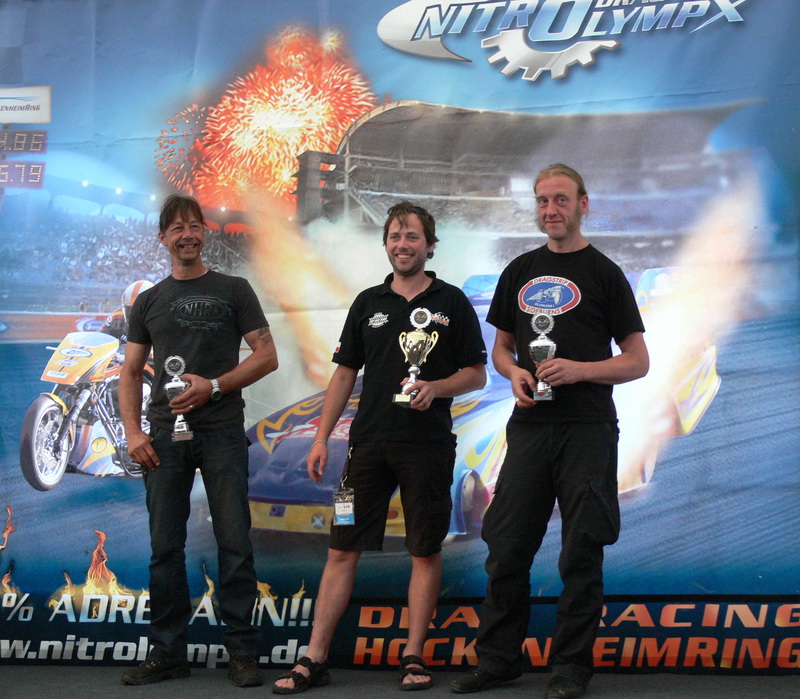 For champion Jolink it can go either way, he can get revenge at Milan, or even get passed by Lewis who only just begun to tune the engine.

Former topgasser Marc van den Boer runs his blown Harley on methanol in the funnybike class, and managed to qualify at place #7. Suffered damage to his clutch but had the whole saturday to repair. The bike was strong on Sunday. 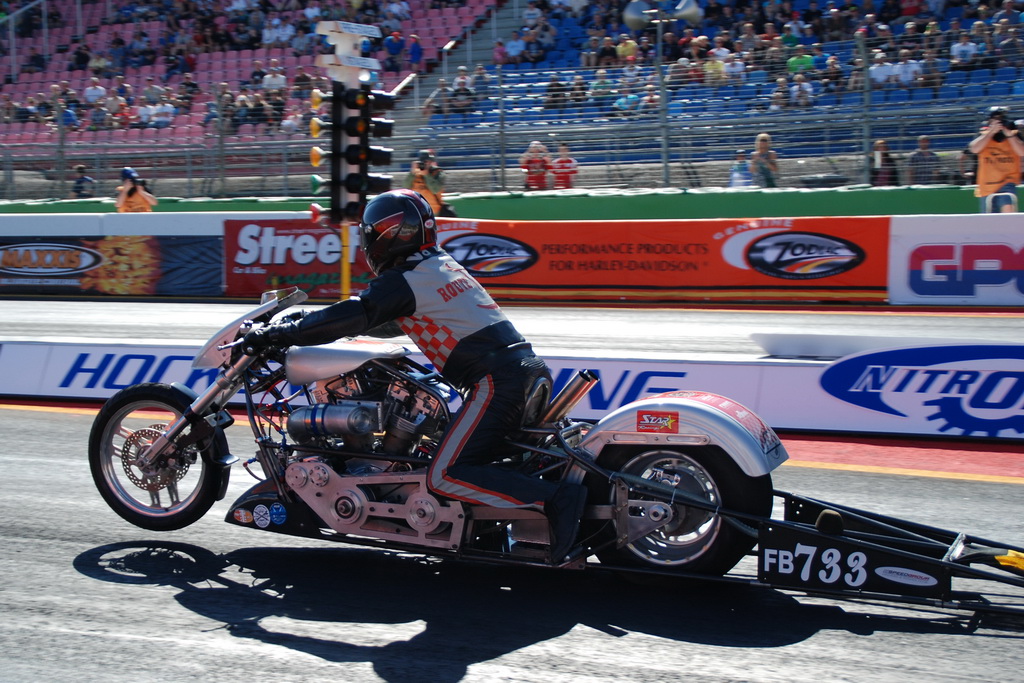 But he left too soon in the quarter finals, and so did his opponent Mike Olie. Both riders were disqualified. Just like van Nimmen, Marc has a slider-clutch, and revved up too much, too soon. 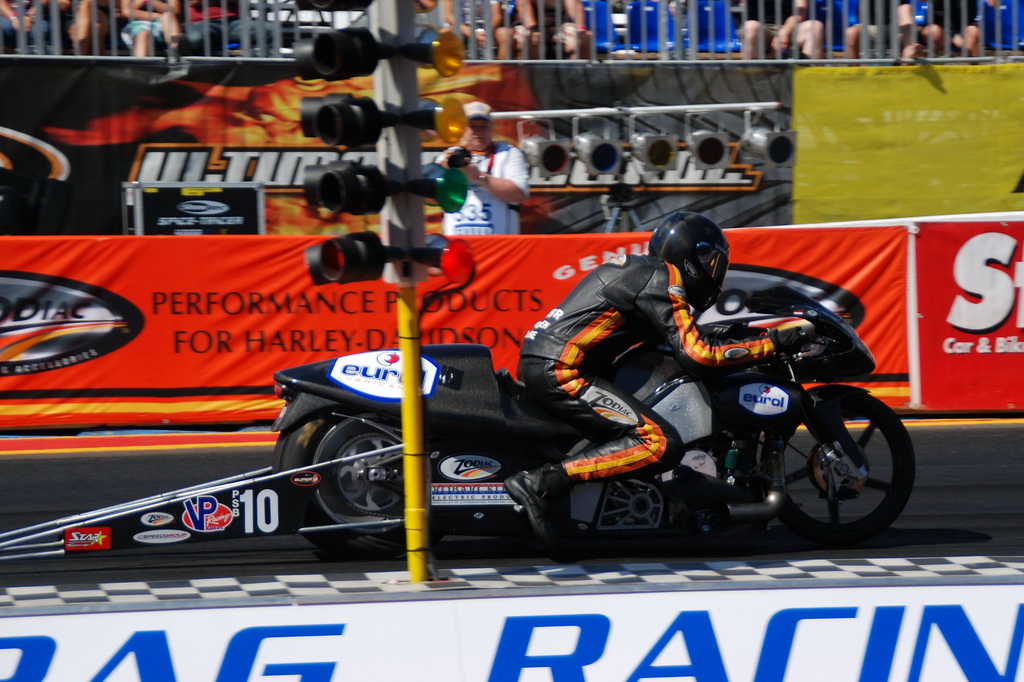 and made it into the finals where he lost to Fredrik Fredlund. 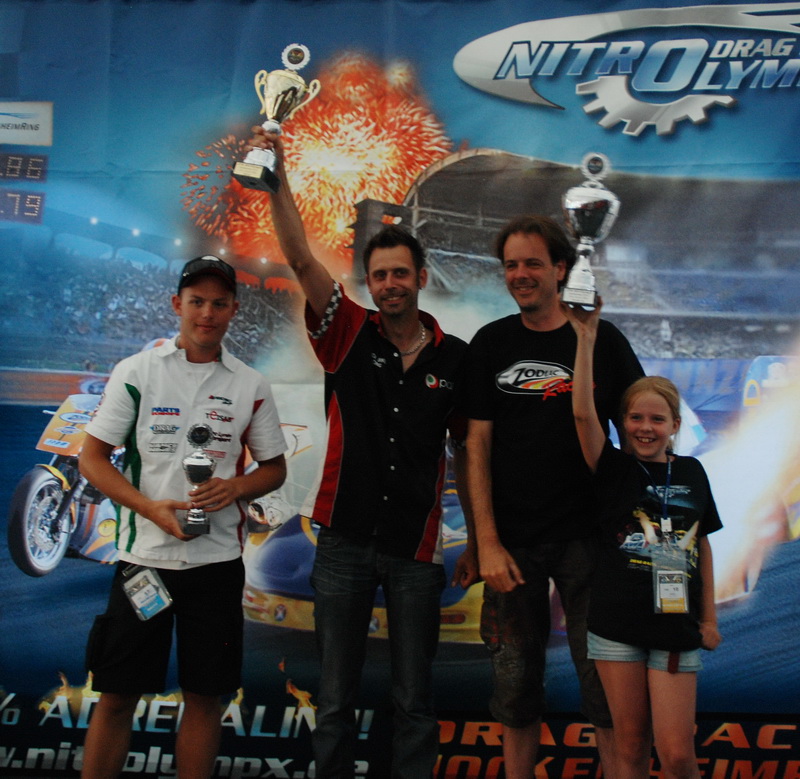 Our former multiple champion Job Heezen was one of the favorites in Supertwin Topfuel as the pilot of the supercharged nitromethane burning Zodiac Harley.

His runs looked more like 400 meter burnout's, and on the above picture you see him loose to Christian Jäger who won the race by beating Gagnon in the finals with a 6.868. That result woulds not be enough to even qualify with the top eight under normal track conditions.

In the Topfuel bike class, Otto Knebl did a new personal best of 7.846 on the "Imperial Wizard", but he probably could have done better at his home track in the Czech republik. 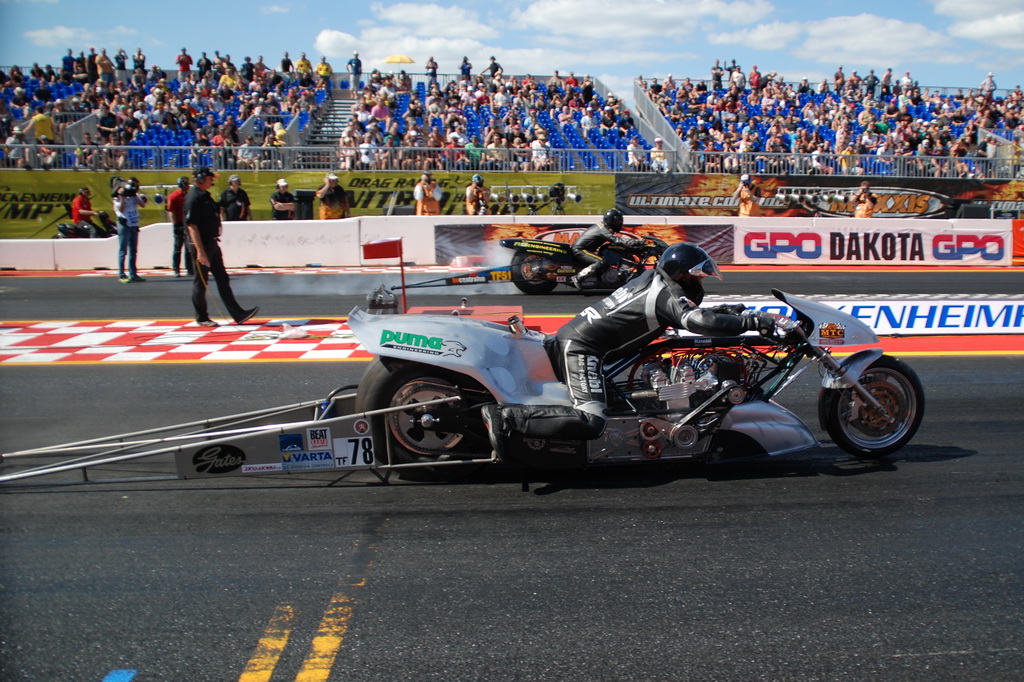 Maybe even with his funnybike! At the above picture you also see Ricard Gustavsson smoking his tyre.

Steve Woollat hardly ever races outside the UK, so it was good to see "the Dealer" come over and make it into the finals . Too bad the view was obstructed by Ian King smoking the place for seven seconds. 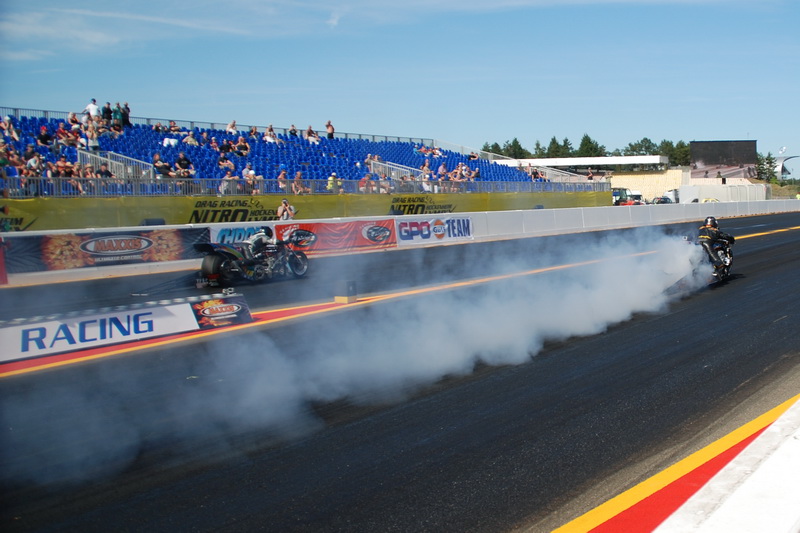 After the sky cleared up, we saw that seven seconds was enough to take the win! 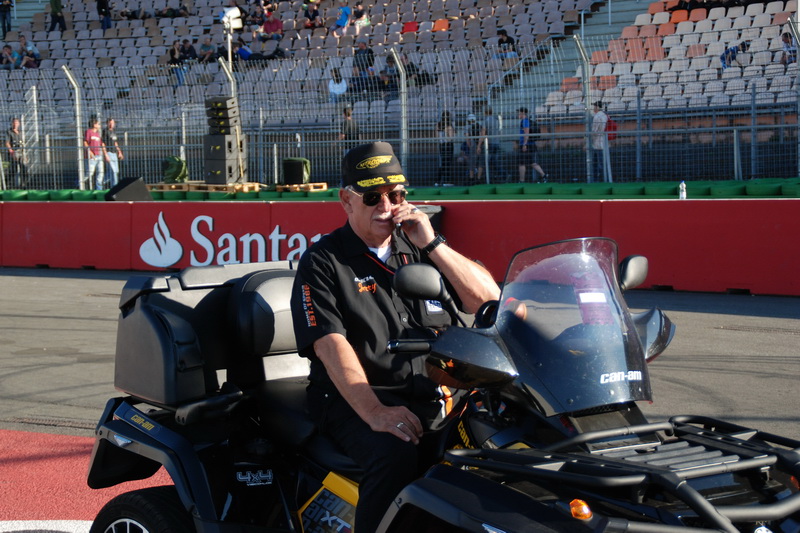 Thanks to Jerry the whole the crew at Hockenheim. They worked hard to make the best of a bad situation. Jerry promissed there will be concrete on the track instead of asphalt next year. I take his word for it.

Thanks to Rene for the use of his youtube films.

Bruhn will take the wheelybar off to race in SST again, to fit it again for Mosten. Harry van Schie was absent in Hockenheim but has repaired the damage and is one of the favorites in Holland.