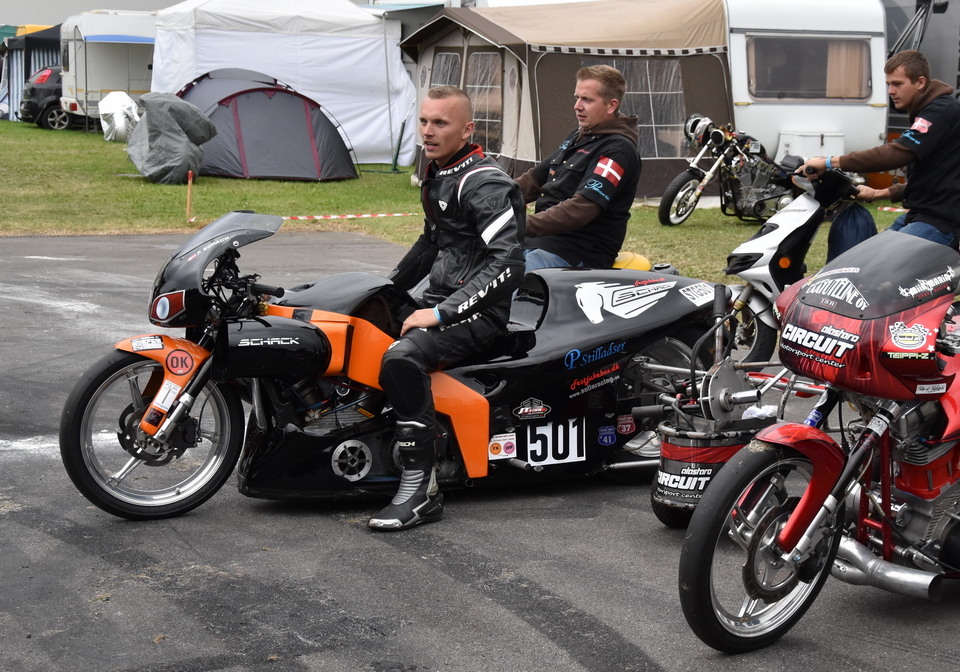 Team Schack had already won this year's championship, and Jolink and Birch were in a hard battle for place #2. The track was in excelent condition but rain fell on friday afternoon, so only two qualification rounds were held that day. 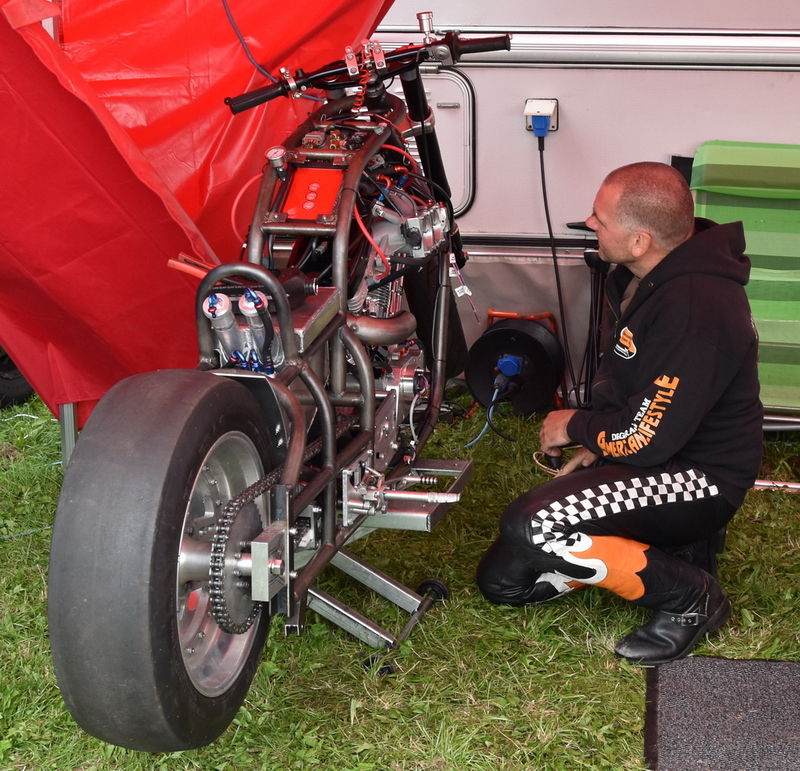 Tom was racing in the pro-twin bike class on his "moditwin" that is for sale, while Chris van Nimmen had a close look at the Tom's new bike.

The bike of Mats Larsson stayed in the tent all weekend. It would not rev up, and Team Sweden spent much time to diagnose, and think they found the cause of problem (the Motec). 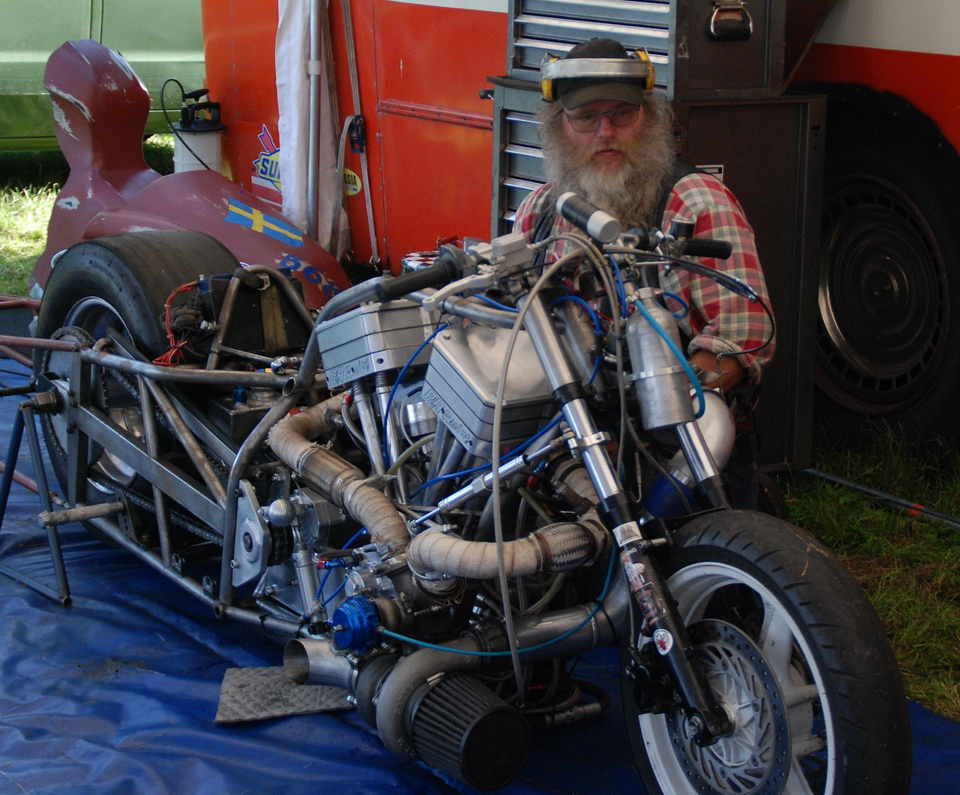 Mats thinks it's been causing some trouble for a long time already and is optimistic for next season.

Jan Malmberg was still waiting for parts to repair his double blown V-twin, but made himself usefull as startcrew for Erik Nielsen, who produced the traditional nitro-fireball at Mosten. 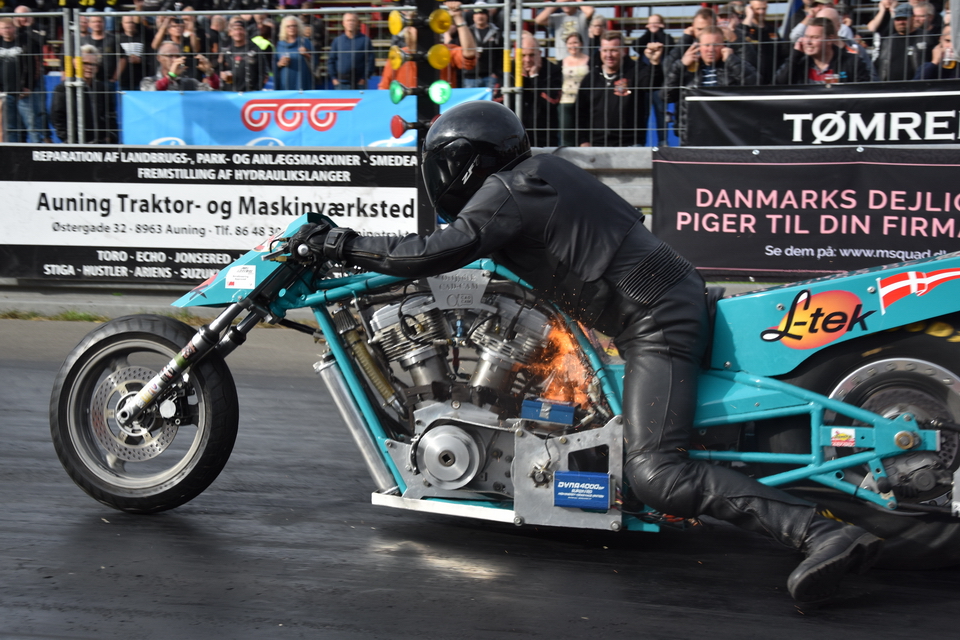 Gerd Caspari made two great passes on friday, too bad there were problems with the timing equipment that day. 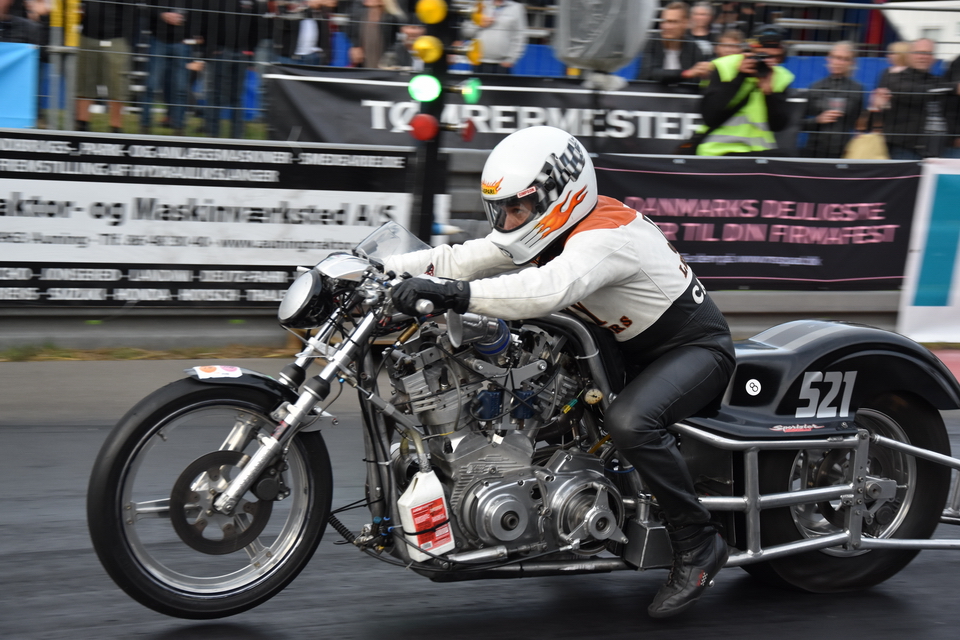 Gerd made it into the top four on saturday but it looked like his bike hesitated at the start of the semi finals, so he made the 4th place at Mosten. Caspari made the 4th place in Euroserie this year too! Gerd was assisted by his best friend Cord Albers who had wrecked his gearbox at Hockenheim but still got to ride down the track on various tow bikes.

Confusion at the start line during the first run of Chris van Nimmen, the clock was already running before he made a move. It rained for a few hours on friday, and on the second and last attempt to qualify for saturday, Chris broke the chain during his burnout. And that was it for him at mosten. 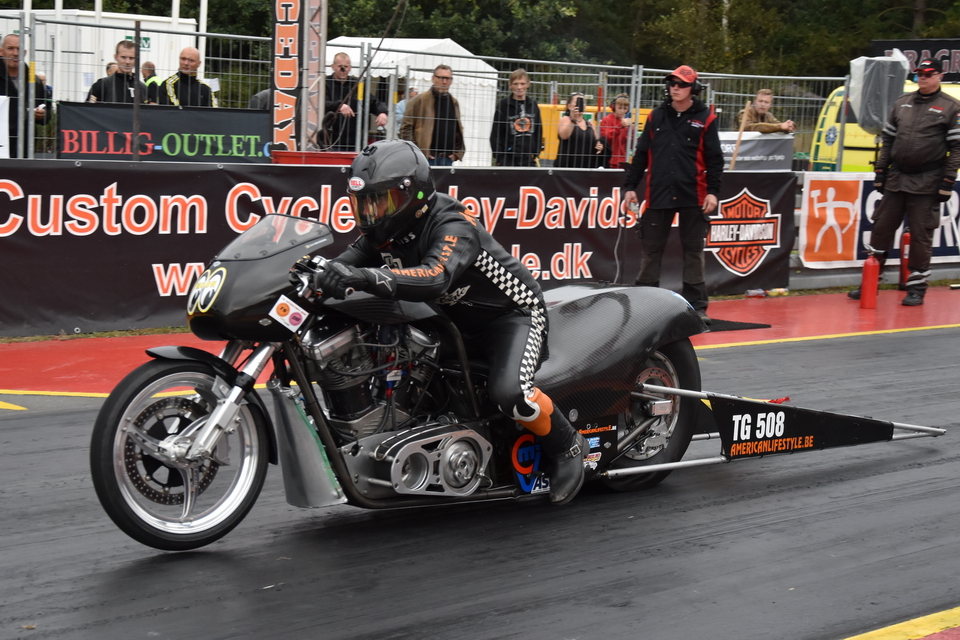 If the weather looks good, Chris might test the "American Lifestyle" bike one more time at Drachten soon.

Kirsten Hegre of team Rolfstad made place #12 on friday. Her son was more succesfull and made third place in the Top Fuel Bike class. 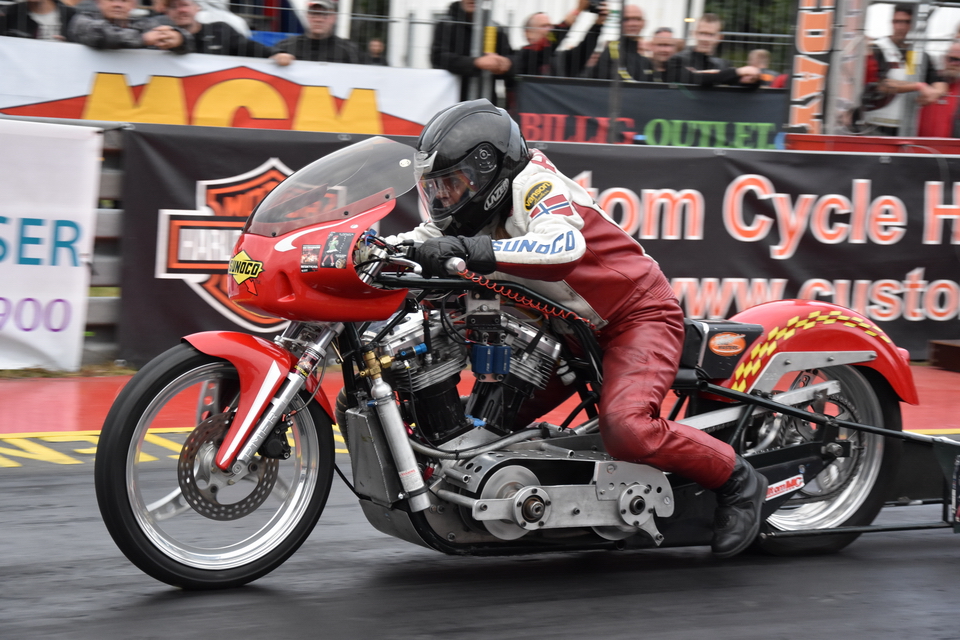 Horst Petersen (below) did two passes on his V-rod on friday. 6.69 was his best result, and place #9. 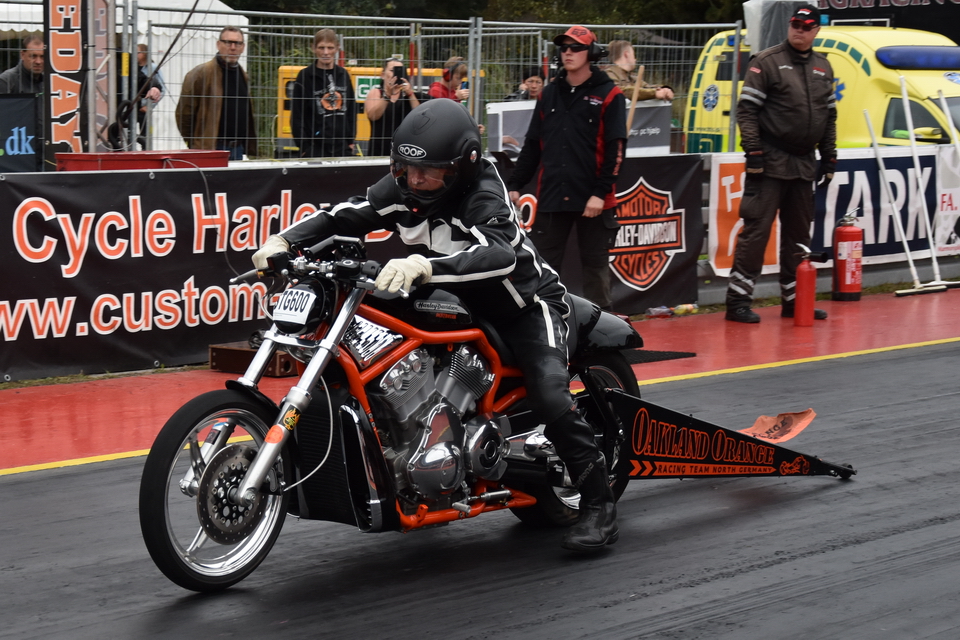 Bernd Foit shut his bike off after his burnout in round one, made a pass in round two, and wrenched all night on his gearbox. 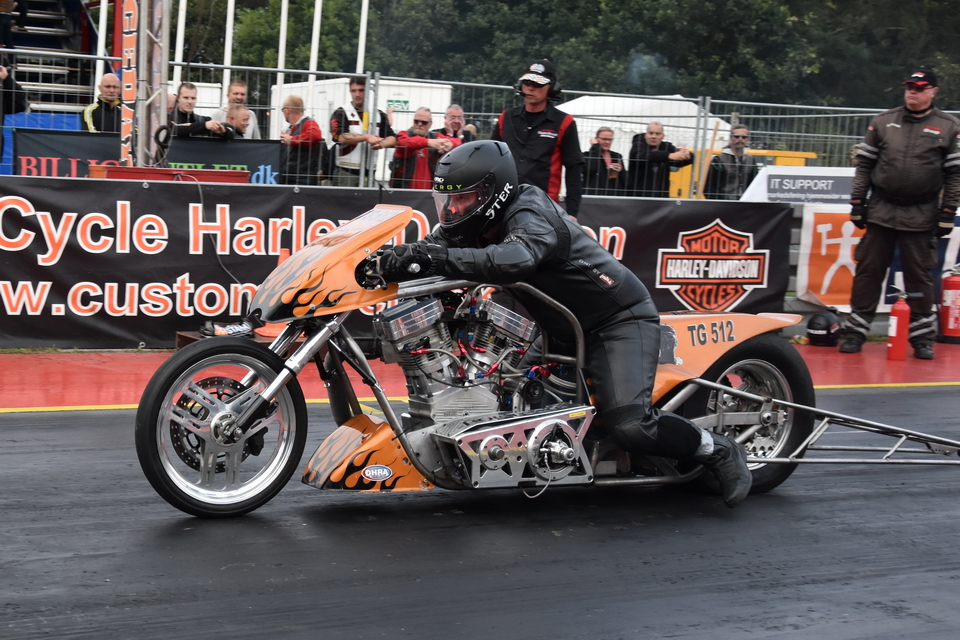 Bernd was race ready on saturday morning, but then the decision came that there would be no more qualifications. And he was not in the top eight.

Anders Jensen was on place #9 on the list after round one, but improved to #7 in round two, so he was in for saturday. 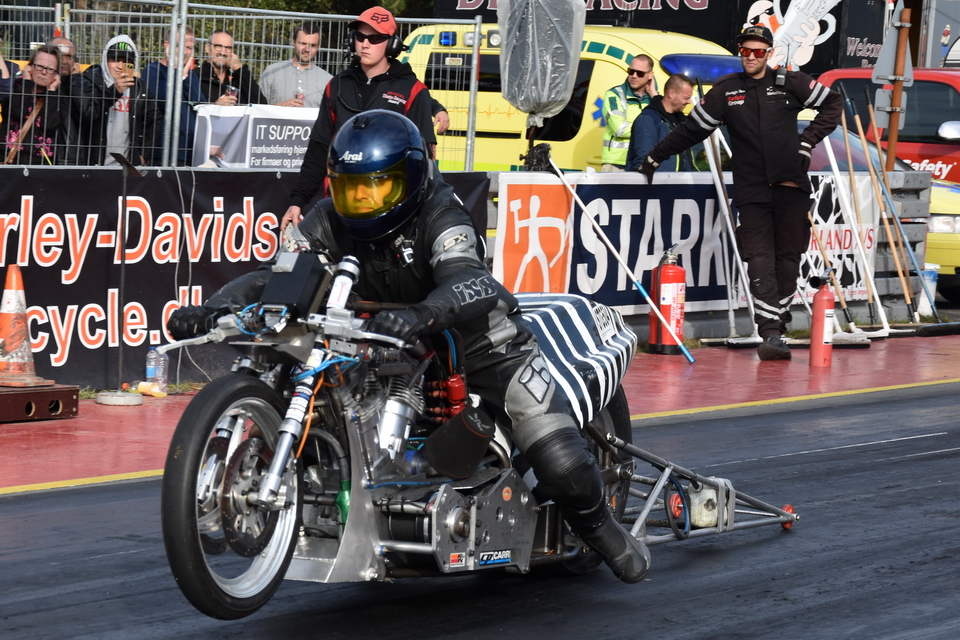 After a good launch, his bike went left, just like it did during his burnout, and Anders was off throttle early.

Christian Bruhn made two passes on his turbocharged Honda on friday at Mosten, with 6.0 seconds as his best result. 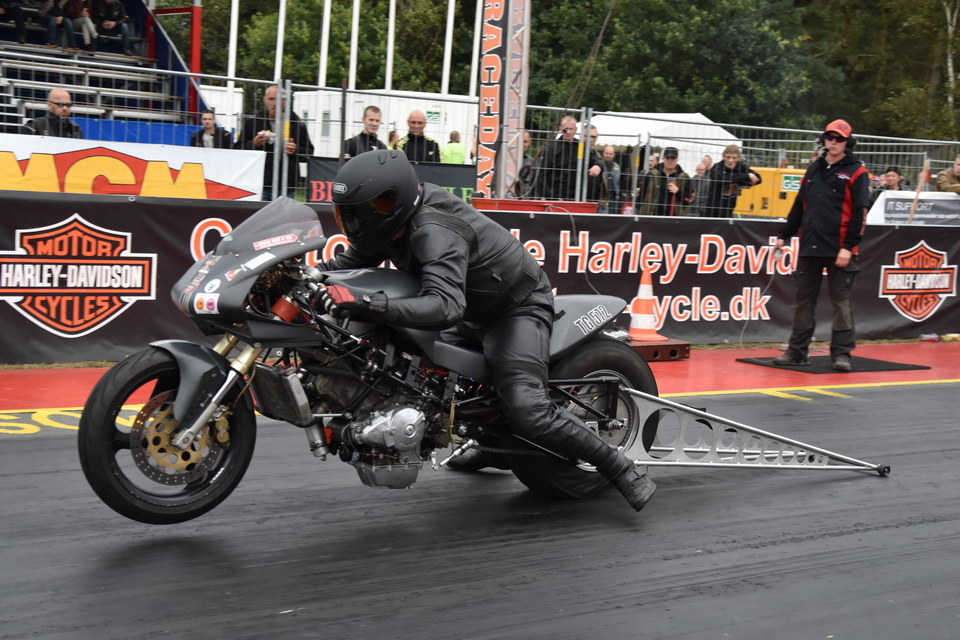 He was qualified for saturday, but damage to a cylinder made him watch the race from the grandstand. Christian made place #7 in the 2016 championship and will be back next year on a supercharged Harley! 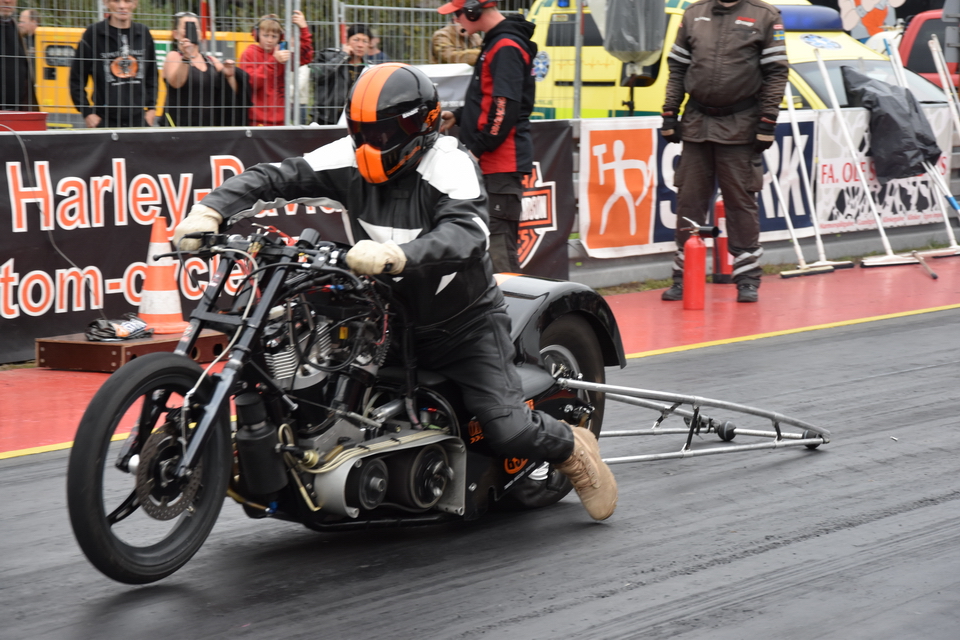 Maik Kruger made made a pass on John Hansen's bike, and Ole Schleichert raced a V-rod. 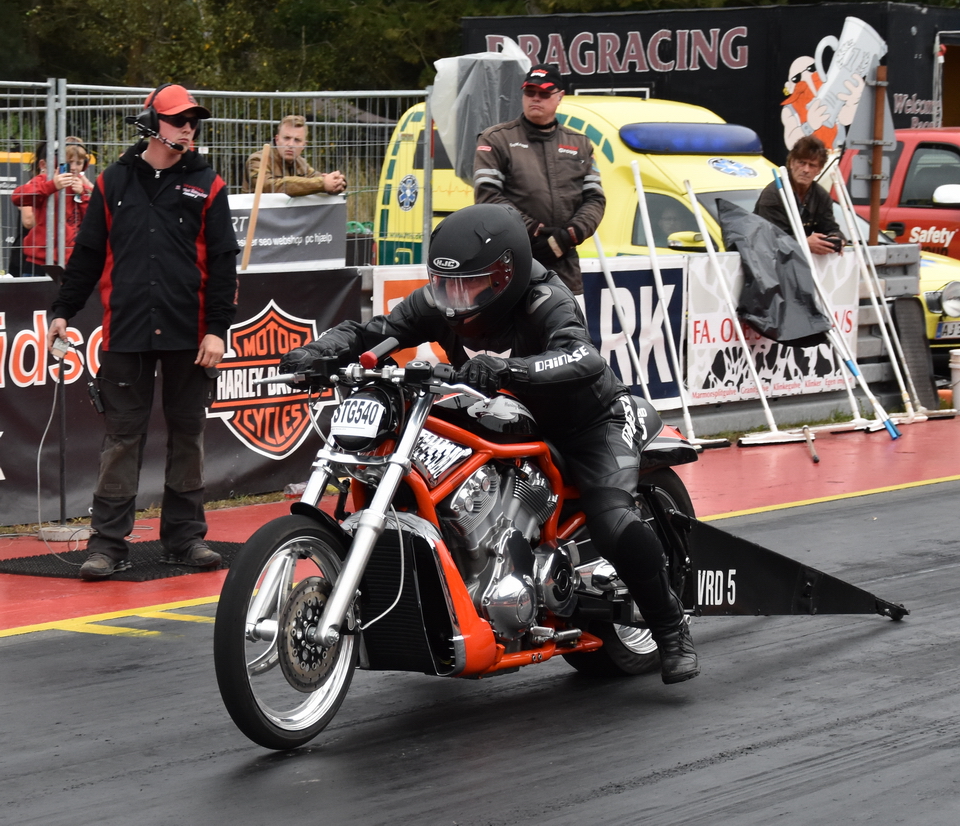 Ole also raced on saturday, as he came in as the alternate for Bruhn.

It was the first visit to Mosten of Miia-Maria Vepsäläinen and her team. 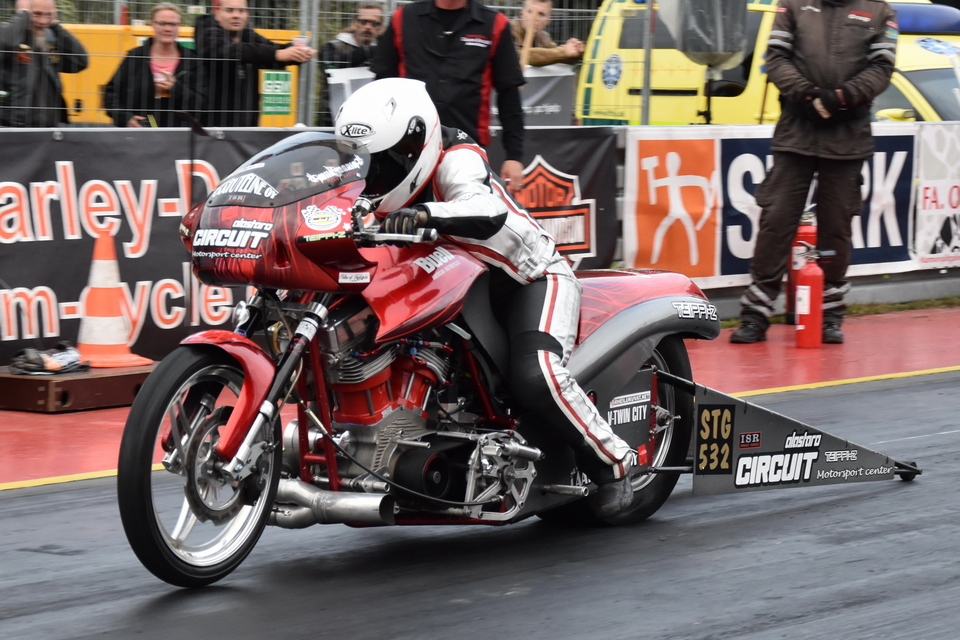 She qualified in the top eight on friday, but made an error in the quarter finals, and her bike stopped shortly after the launch. 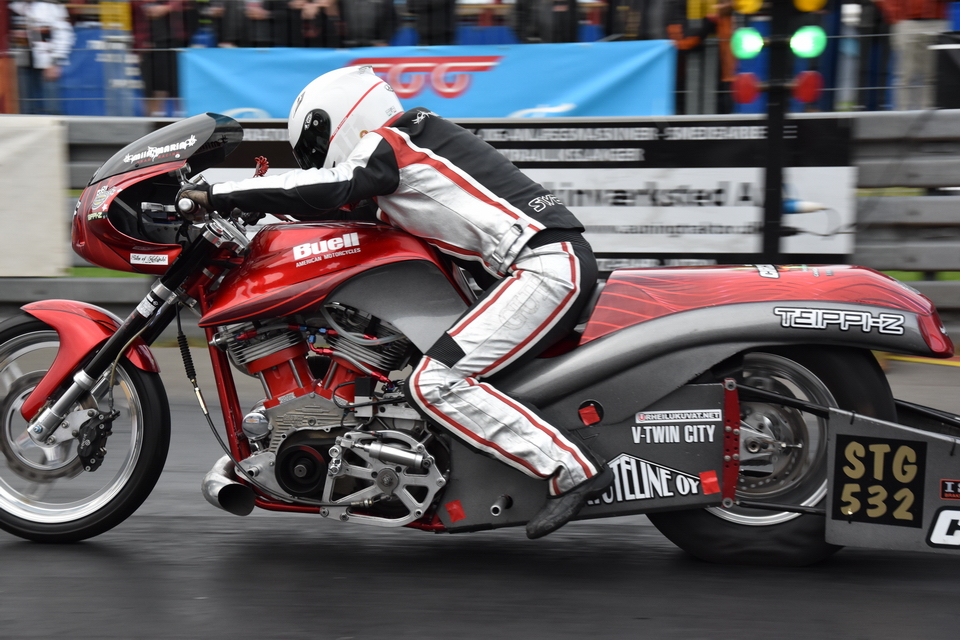 Miia-Maria attended four euroserie races this year, and will concentrate on national races next year. I think the topgassers should visit her in 2017.

Team B&B attended all the euroserie races for two years in a row, and just like last year, Birch was in a constant battle with Herman Jolink for the second place in the championship. 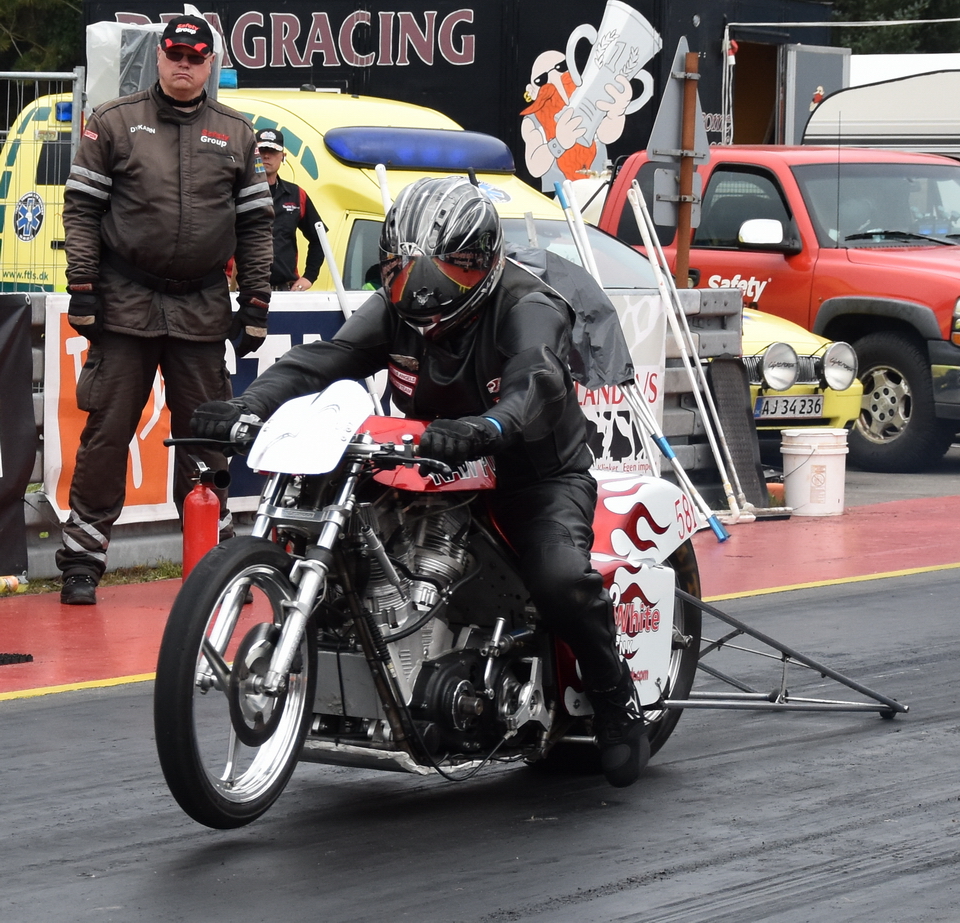 This year it was decided on saturday in the quarter finals. Birch and Jolink made place #5 and 4 in that round. Birch still had a busy afternoon, crewing for his friend Jesse. 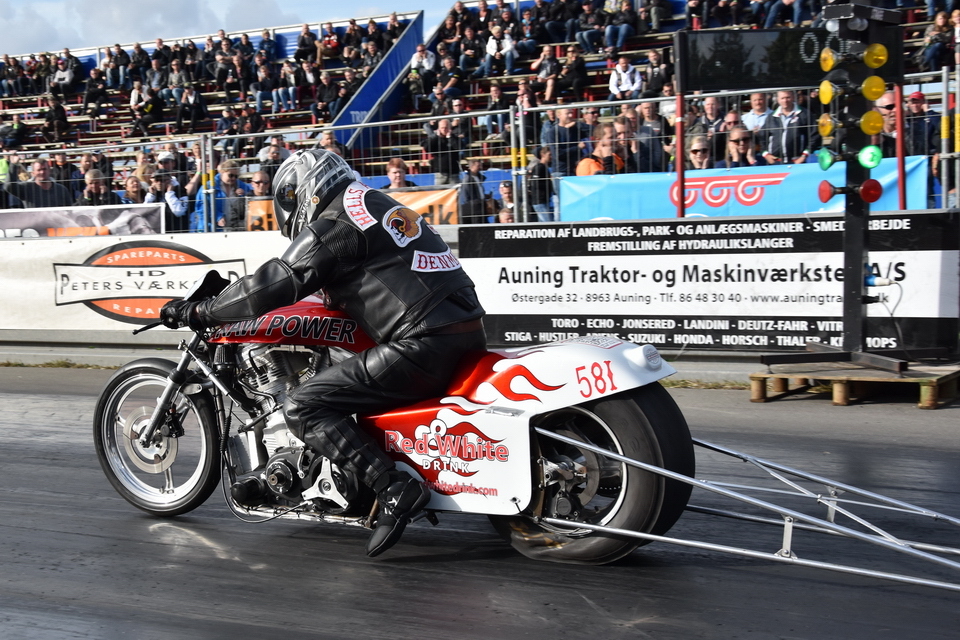 It took Jörg Lymant two races to get used to his new bike, Drachten and Hockenheim, and at Mosten he got it running. Jórg did 4.8 and 239 kmh on friday afternoon. His feet kept sliding off the foot pegs, so Jörg will make some adjustments to the bike and might test it one more time at Malmö soon. 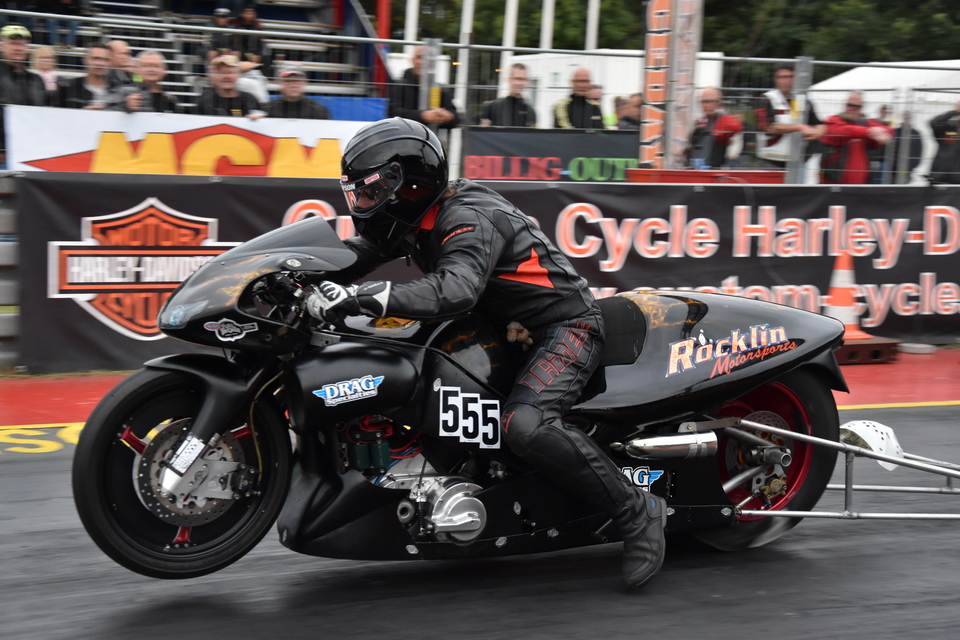 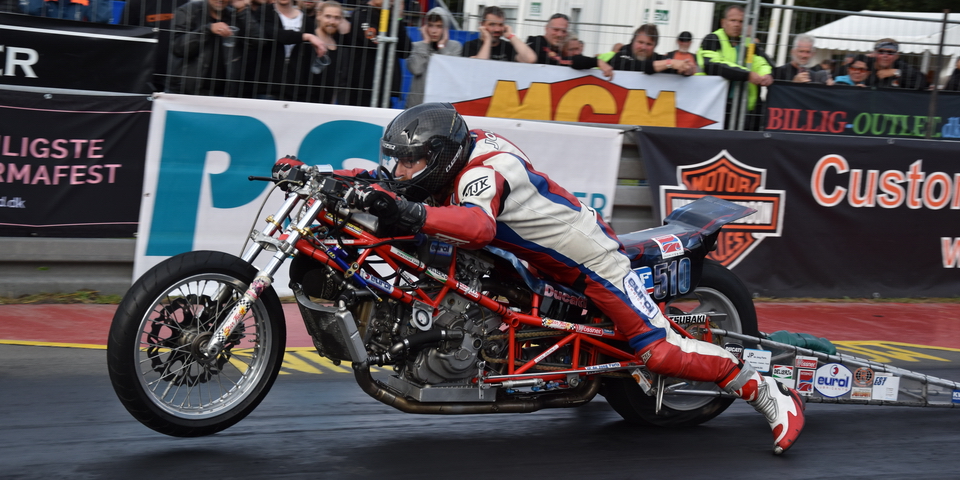 Herman is working on a new dragbike based on the Ducati Panigale engine and hopes to race it next season.

Frederik Schack was top qualifier at Mosten since his first pass, but Jörg Lymant was making much progres on his new bike. Jörg did 4.76 in the finals, Schack had won the semi's with 4.73 and saved his best run for last. He won the race with 4.69. Both riders were doing the same speed: 236.8 Kmh. 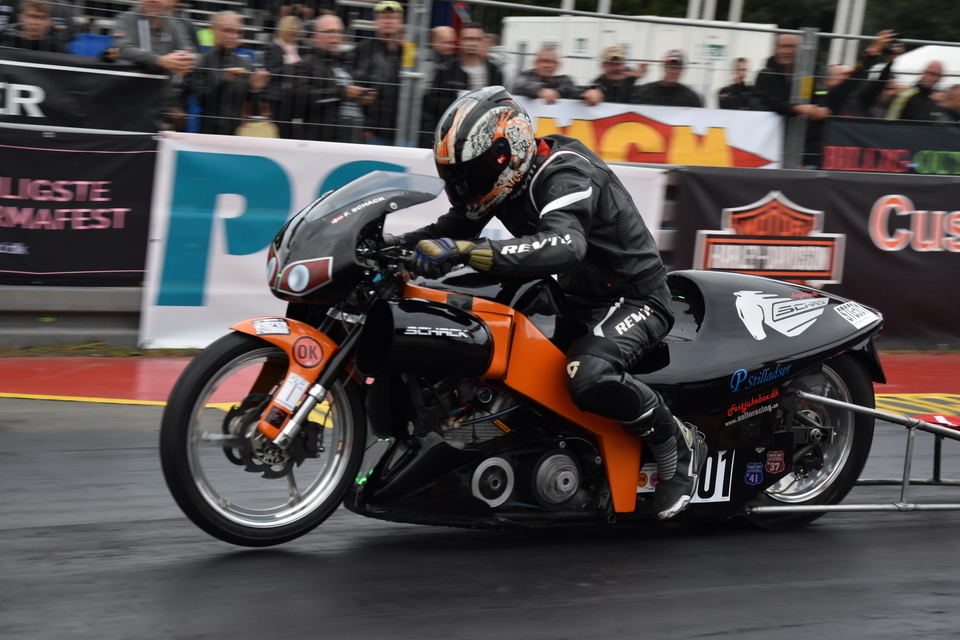 Herman Jolink was quicker then Gerd Caspari in the semi finals, and made the third place at Mosten Racedays. Jörg Lymant did a great new personal best of 4.765 in the finals, and Frederik Schack went quicker every round and won with 4.697 seconds. 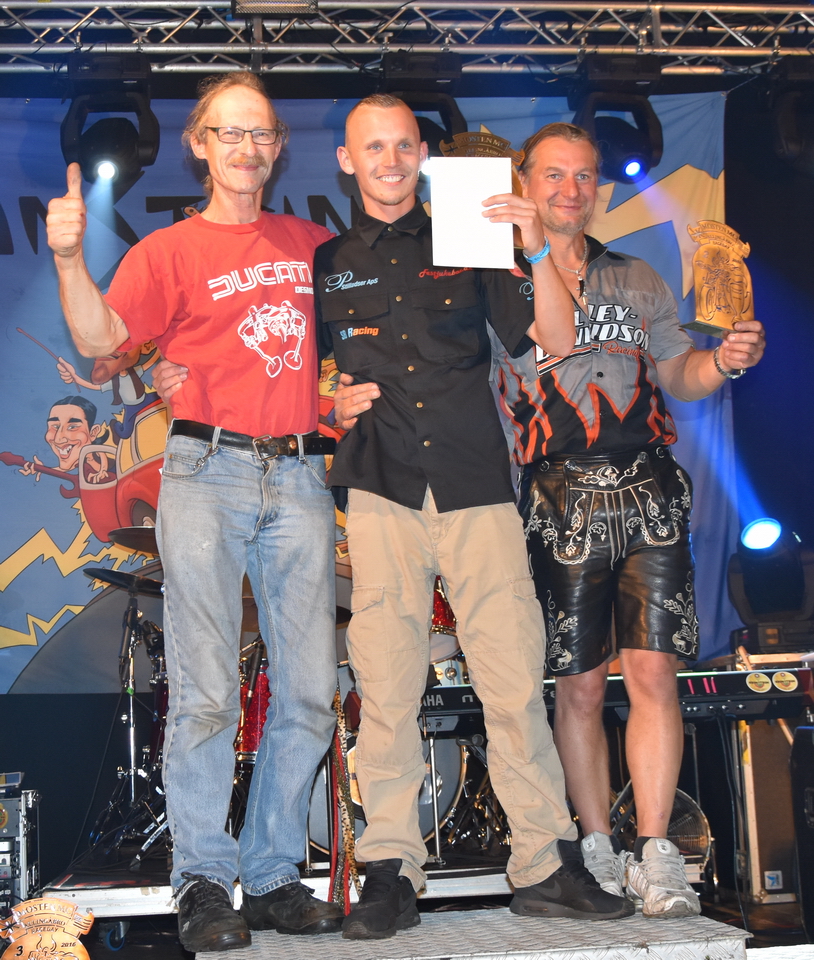 Herman Jolink scored just 100 points (that's just one round in a dragrace) more then Lars Birch Andersen this year and became second in the 2016 championship. Congratulations to Frederik, Herman and Birch!

Many thanks to Hitz, Holger, and the crew at Mosten, see you next year! 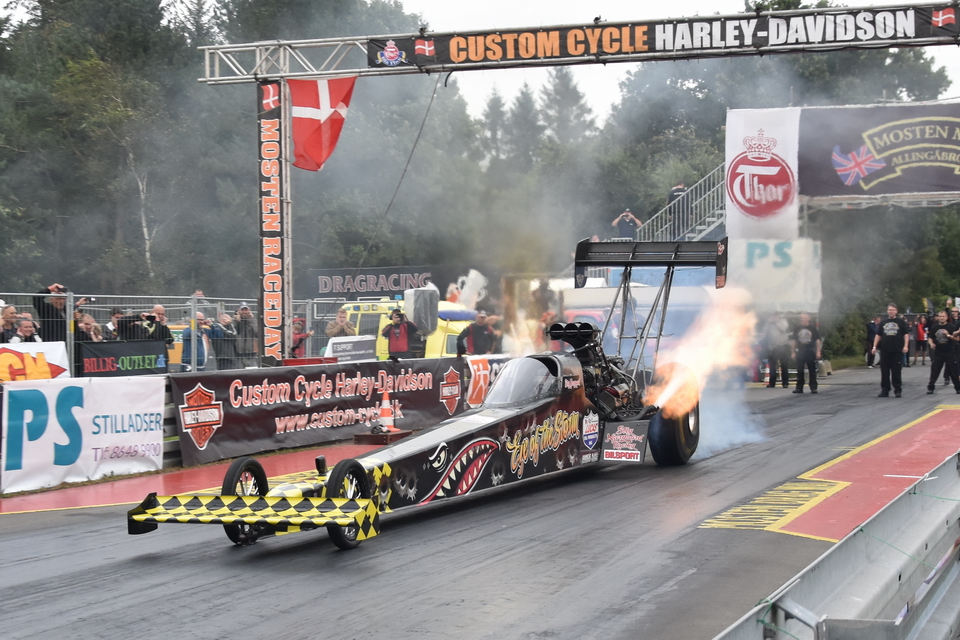