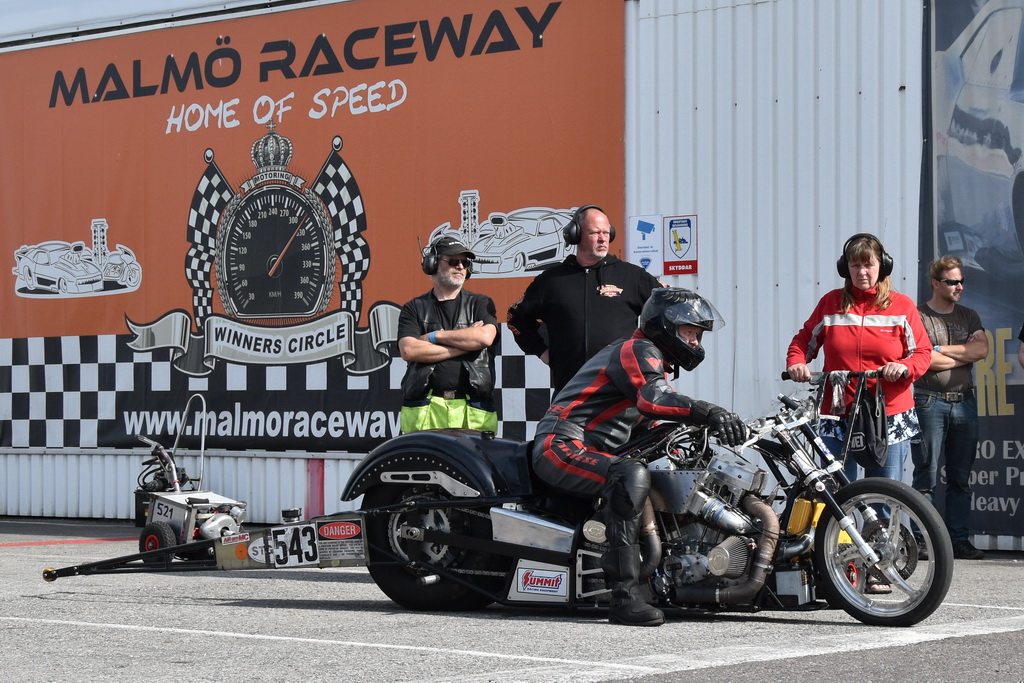 Ten topgas teams were present in Malmö and tried to qualify on saturday for the 8-field 1/8 mile dragrace on sunday. Olaf Menzi from Switserland had brought his new toy. 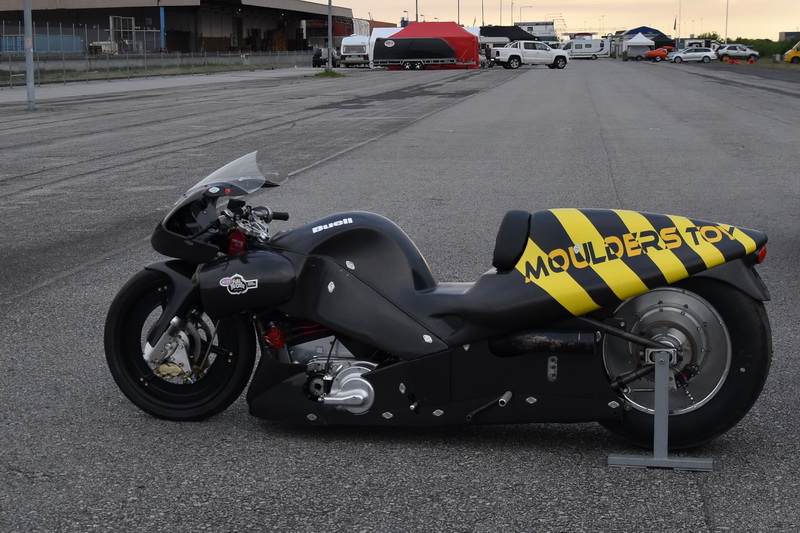 Joerg Braune was assisted by his pregnant wife while racing his new bike, and they had lend their crew man to Herman Jolink. Joerg Braune was first in line in round one, did a nice launch but they forgot to remove something... 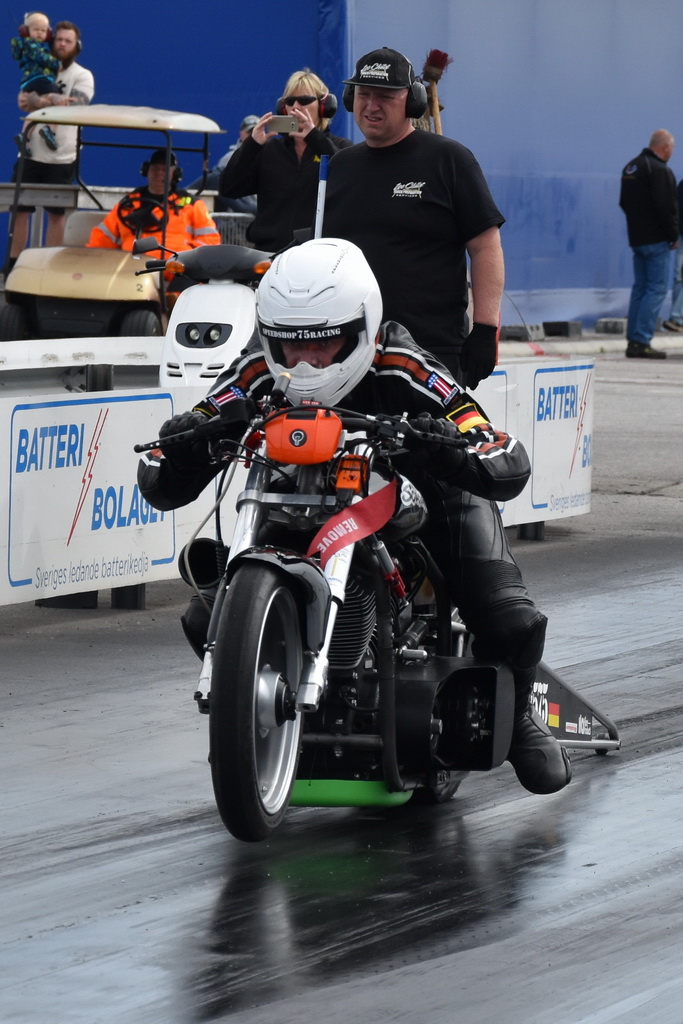 Jan Malmberg made a burnout but his bike stopped after that, and he went back to the pits. In the other lane, Anders Jensen made a nice and straight burnout and his first pass of the season. A loud bang was heard just before he passed the finish line. 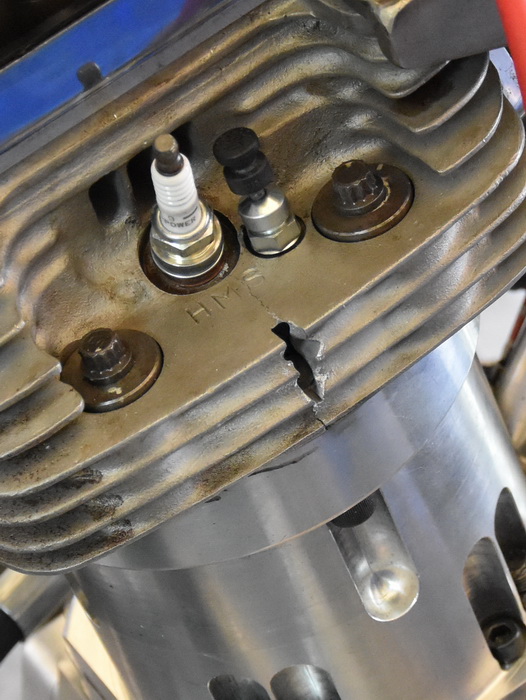 They took the head off and Anders rushed over to to the workshop of Mr Lindskog, who lives nearby.

A high 60-foot time for Gerd Caspari but a great top speed and slightly quicker then Herman Jolink.

Joerg Lymant did his best pass in the first round, and set a time that nobody was able to beat all day.

Sven-Ole Schleichert and Jörg Braune were again first in line and a big improvement for Sven-Oleand on his V-rod Destroyer. 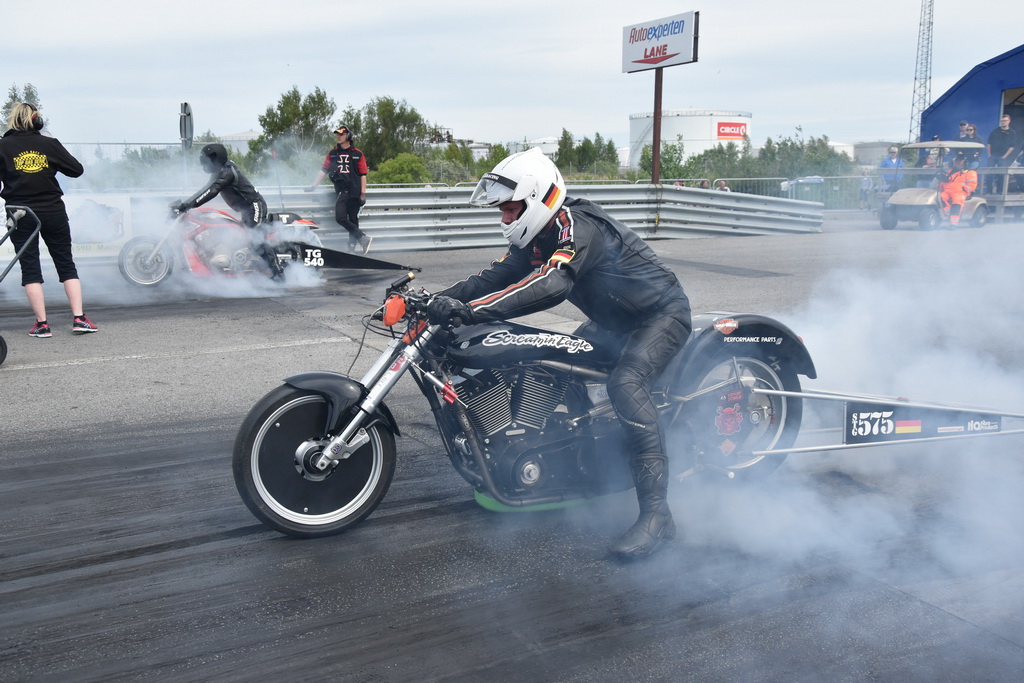 Another burnout for Malmberg and back to the pits again. In the other lane Herman Jolink improved to 5.32 seconds.

Chris van Nimmen's crewchief and brother had to attend a funeral and was absent. Marc van den Boer, who is still waiting for pistons for his topgas bike (4sale), had travelled with Chris to Sweden to assist him at this occasion.

Team Schack had been racing at Santa Pod in PSB the previous weekend and Rene mentioned they might have a problem with the valve springs. Frederik only made a half pass during his first attempt with a relatively high 60-foot. 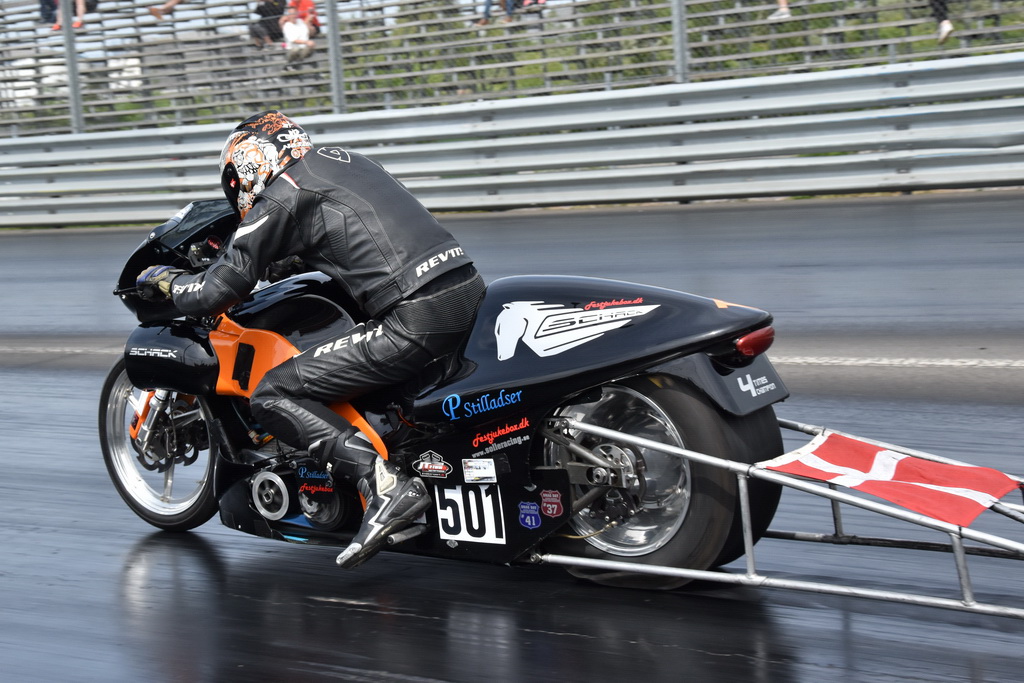 Gerd Caspari was one of the first to arrive at the track, and he got help at from Bernd Niessen who owned and raced Caspari's bike for a few years. 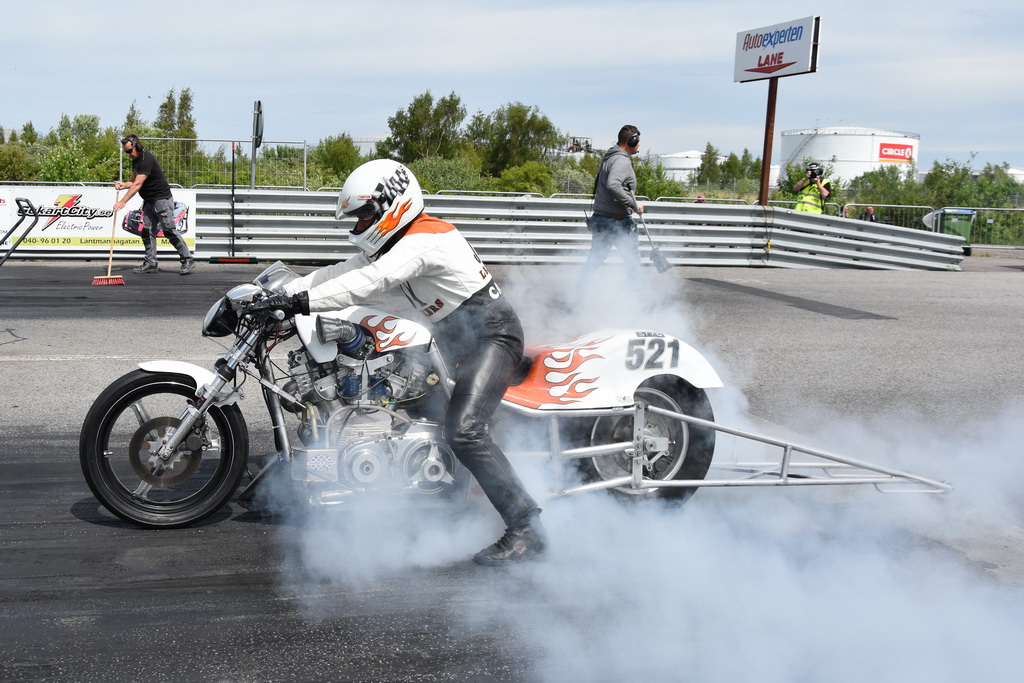 Gerd messed up his launch and could not improve in round two. Jolink and Van Nimmen had passed him in the list after that round.

Team Sweden (pictured on top of this page) had checked all contacts and connections on Malmbergs complex blown bike. 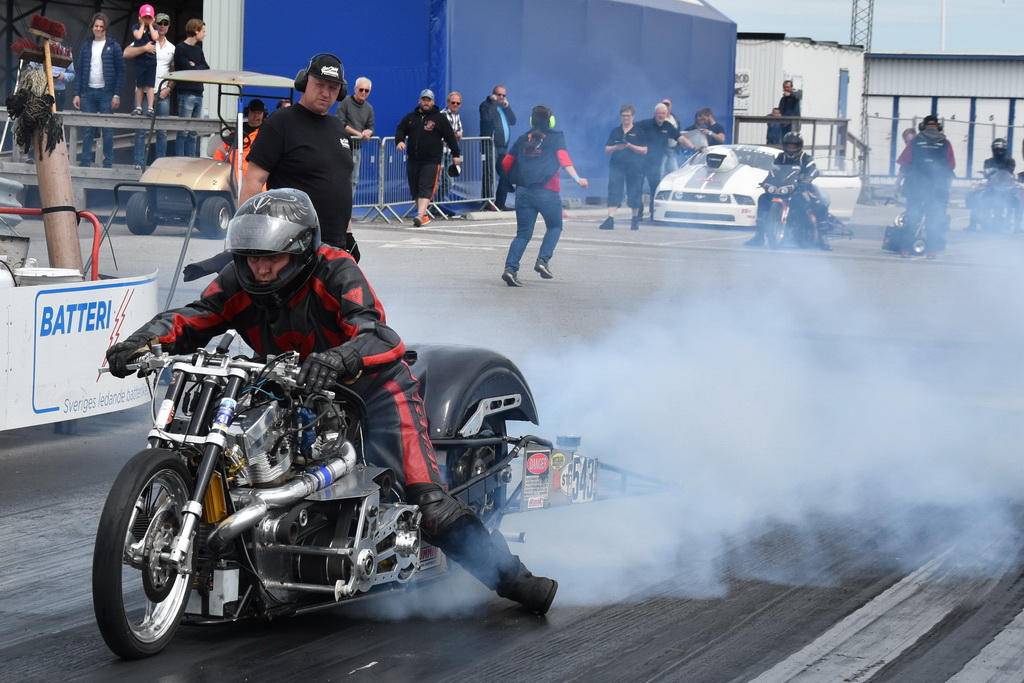 A big burnout and a slow start for Jan, but when he shifted to second gear it flew!

Then Frederik Schack made a full pass and demonstrated his sharp reaction at the tree again. But was not able to beat Lymants best time or top speed.

In the other lane, Sven-Ole Schleichert improved again. 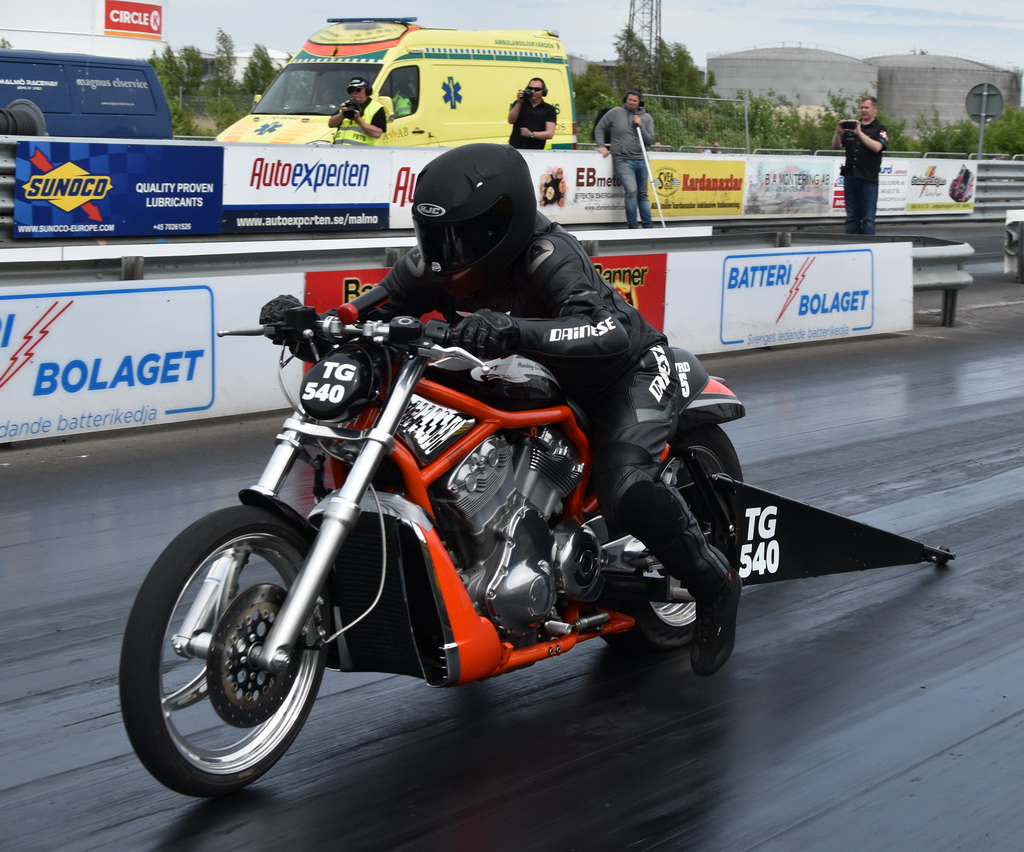 Also a great improvement for Herman Jolink in the third round. 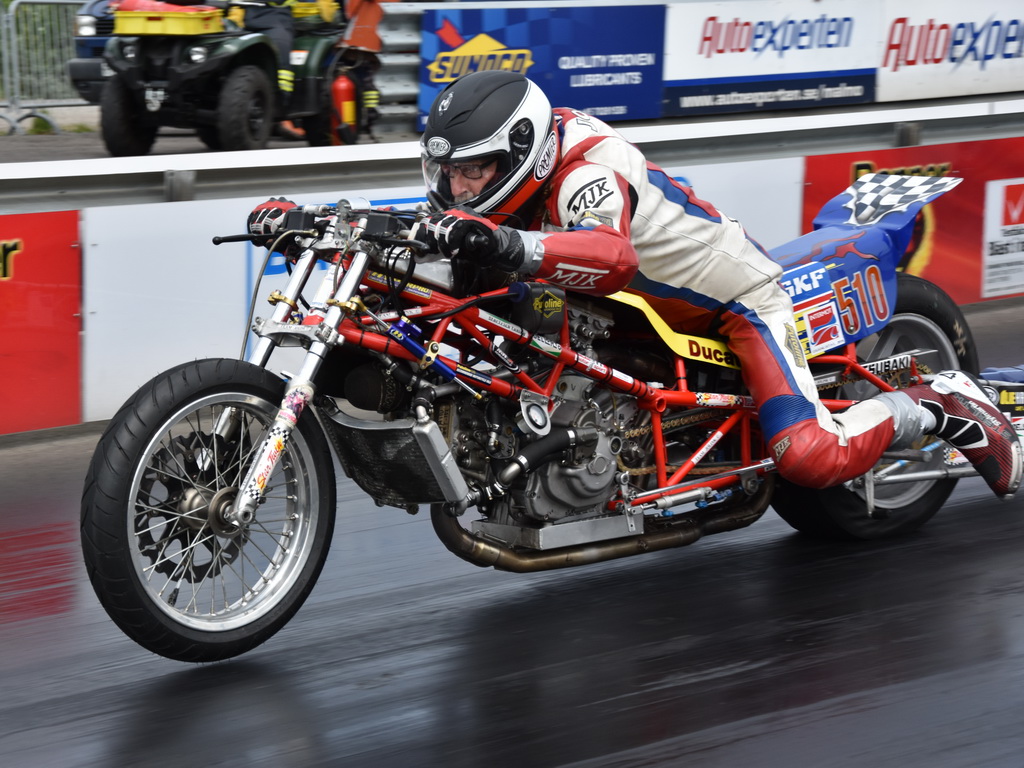 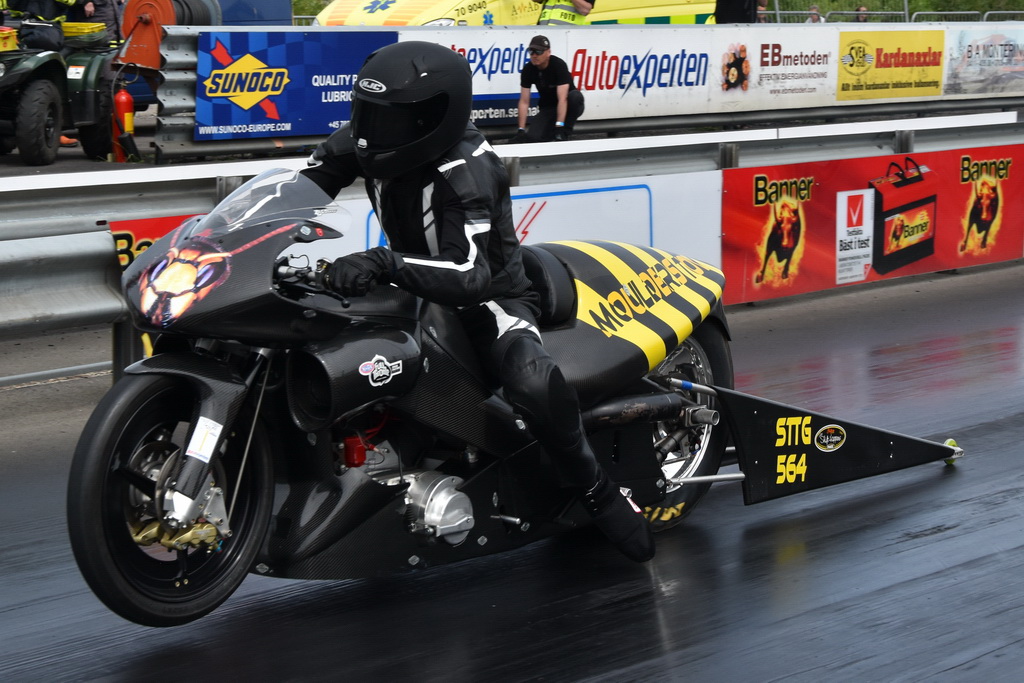 Things got loud in round four when two supercharged bikes made their burnout. Jensen had returned from the workshop with the damage repaired. 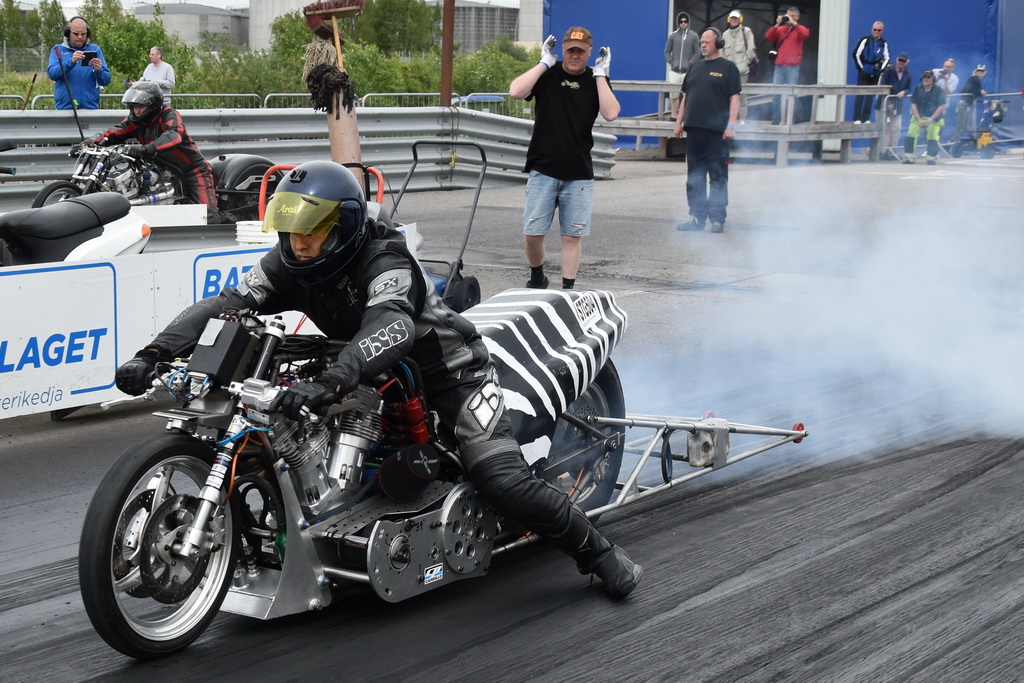 Jan Malmberg did 4.84 and passed Schack in the list. 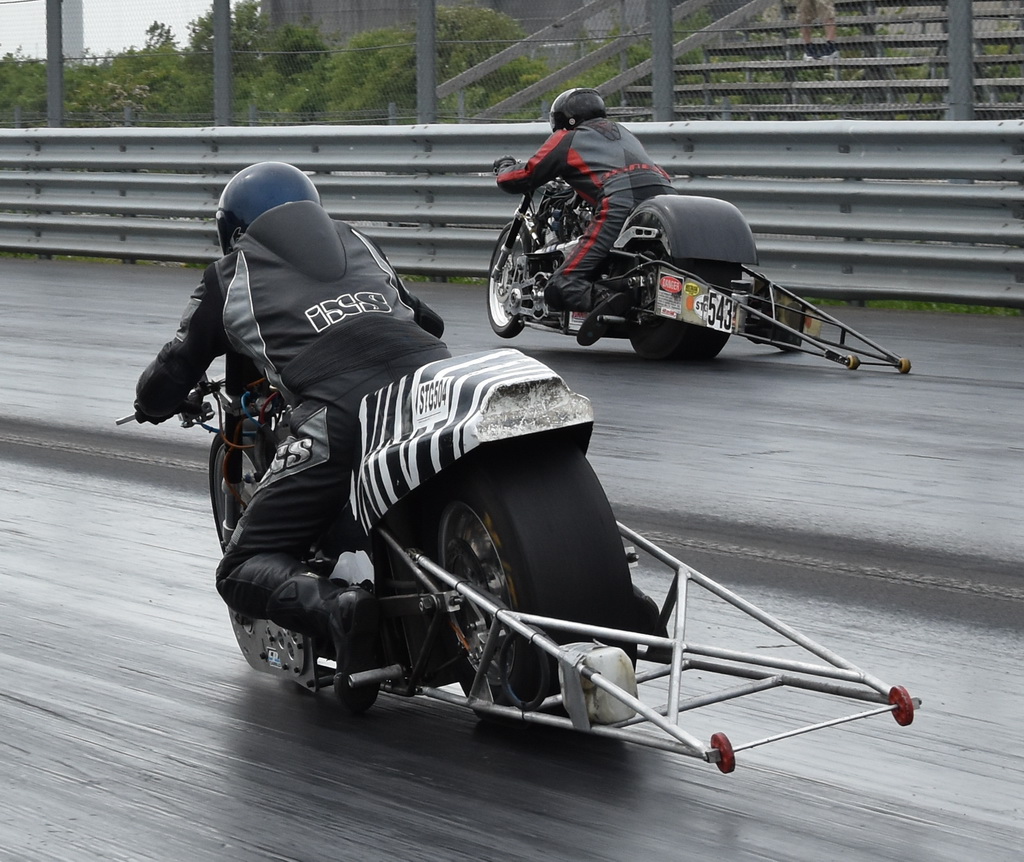 And again a loud bang was heard when Anders Jensen passed the finish line. 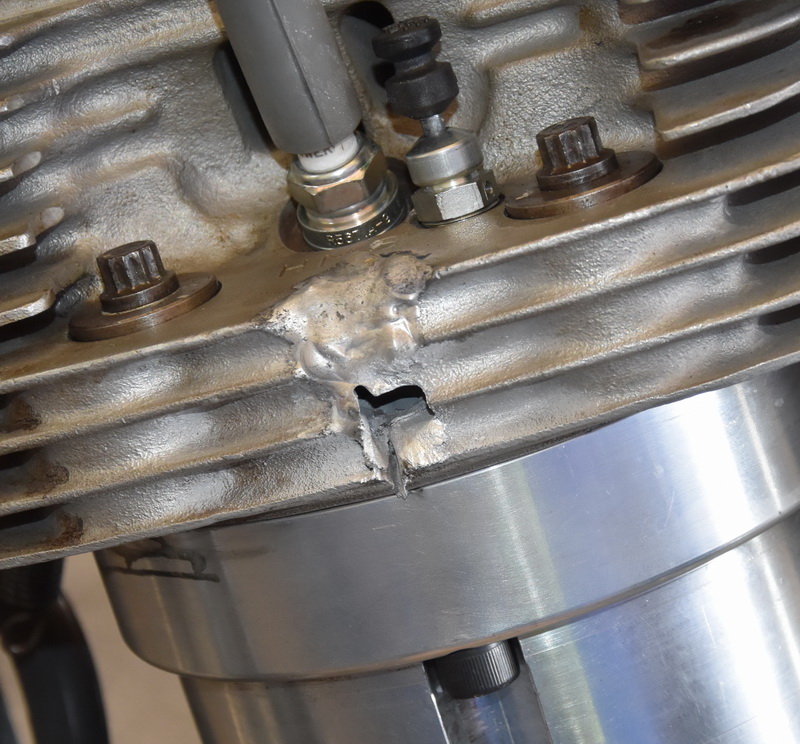 Again, the head was taken off and Anders went to Lindskog's place for a second time that day!

Caspari changed the rear sprocket in the afternoon with 5.22 and 1.18 at 60 foot as the result. And Jolink overrevved his launch after watching Caspari improve.

Chris van Nimmen made another pass, then "Team Belgium" started wrenching on the valve train of the twin cam engine.

Joerg Braune stuggled with his new rear tyre and kept trying all day to improve his 5.9 of the first race at Malmö. He did not succeed, but came close at the end of the day. 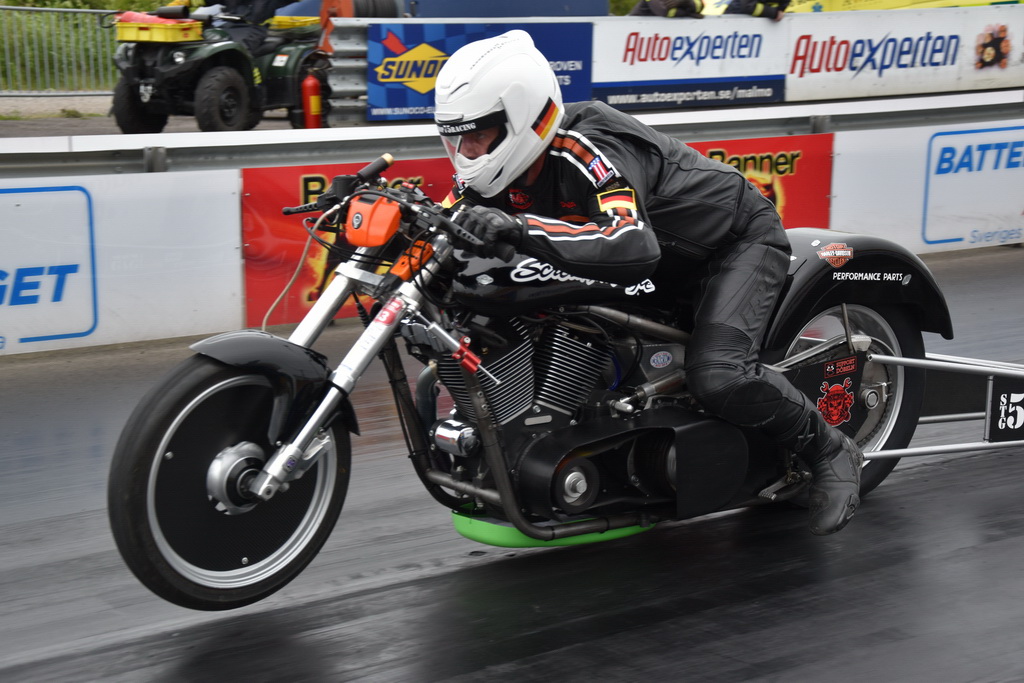 A few more rounds were held after the above list was published, but only a few riders attended and nobody improved.

Anders Jensen back was ready again and the head was back on before diner time. Jensen qualified #8 and was up against Lymant the next day...

And on sunday it rained all day. The race was cancelled in the early afternoon. Van Nimmen and van den Boer kept working on the adjustments to the valve train and at 16:00 they had it it back together, running and thumbs up. Ready for the next race!

Frederik Schack leads the championship after two race, with Joerg Lymant doing the chasing. The difference between them is 100 points, that's just one elimination round! 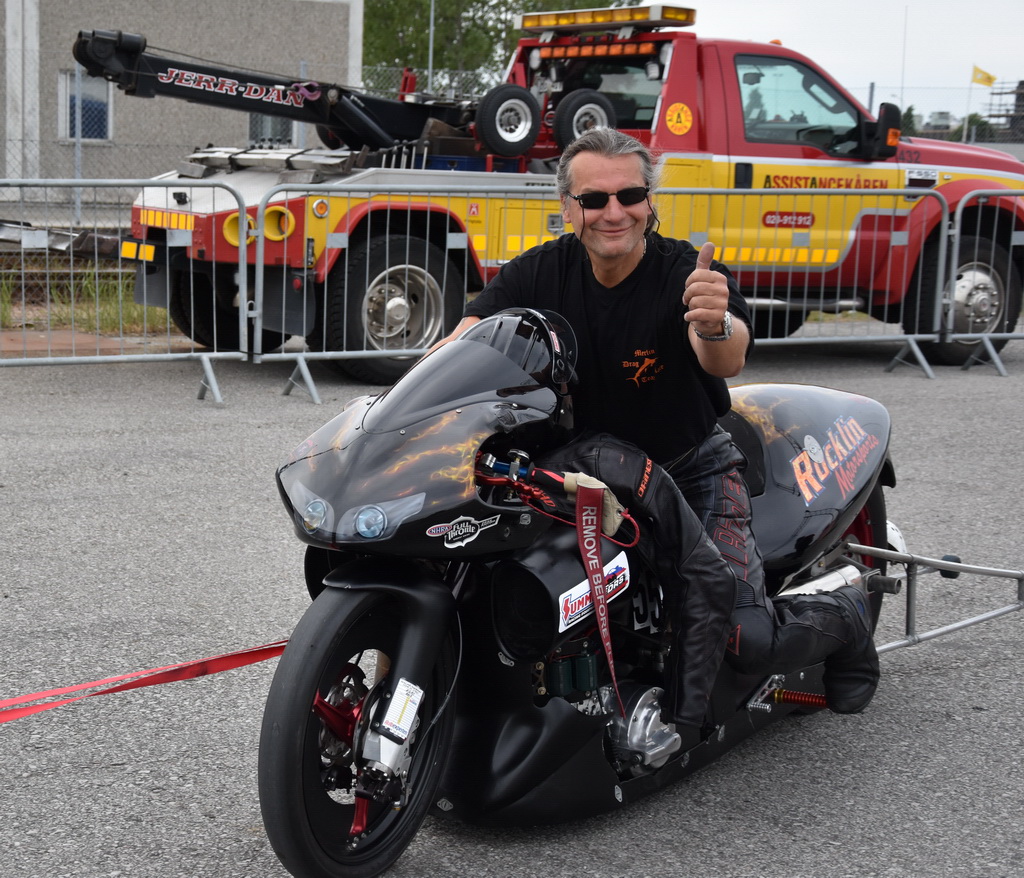 Thanks to the crew at Malmö, see you next year, probably!

The next race in the serie will be a quarter mile dragrace at Drachten in the Netherlands at the end of july. See you all there!

The annual riders meeting of 2017 resulted in the following calender for the the 2017 championship: