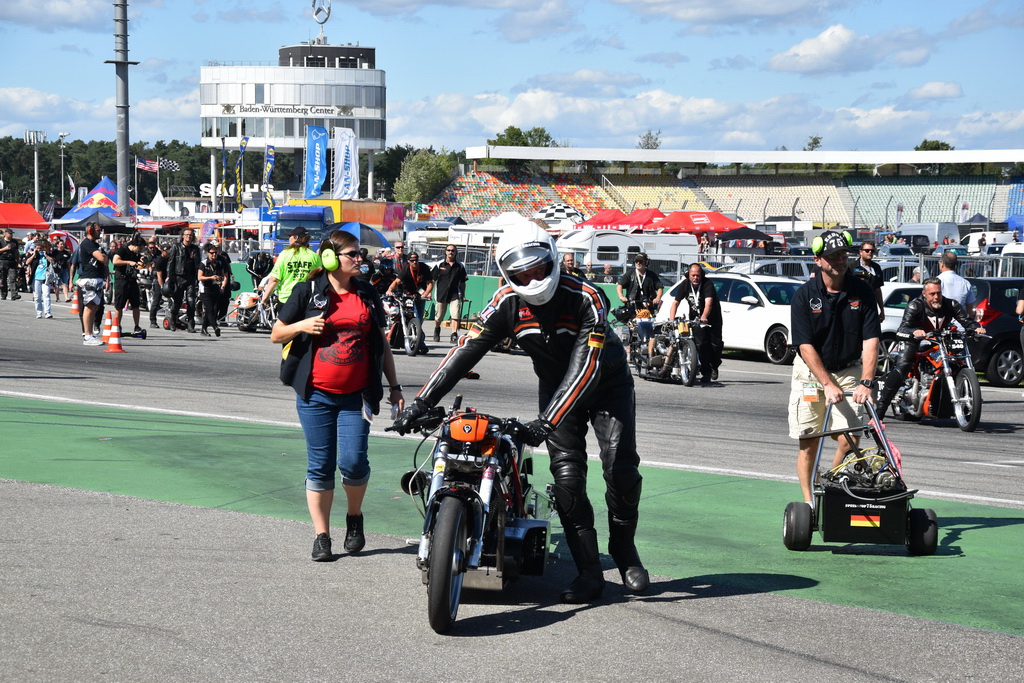 Nineteen topgas bike had passed the technical inspection on thursday and prepaired for the qualifications on friday. Team Schack had big expectations for the race after they had repaired the gearbox that broke at Drachten three weeks before, and had signed in for both Topgas and ProstockBike. 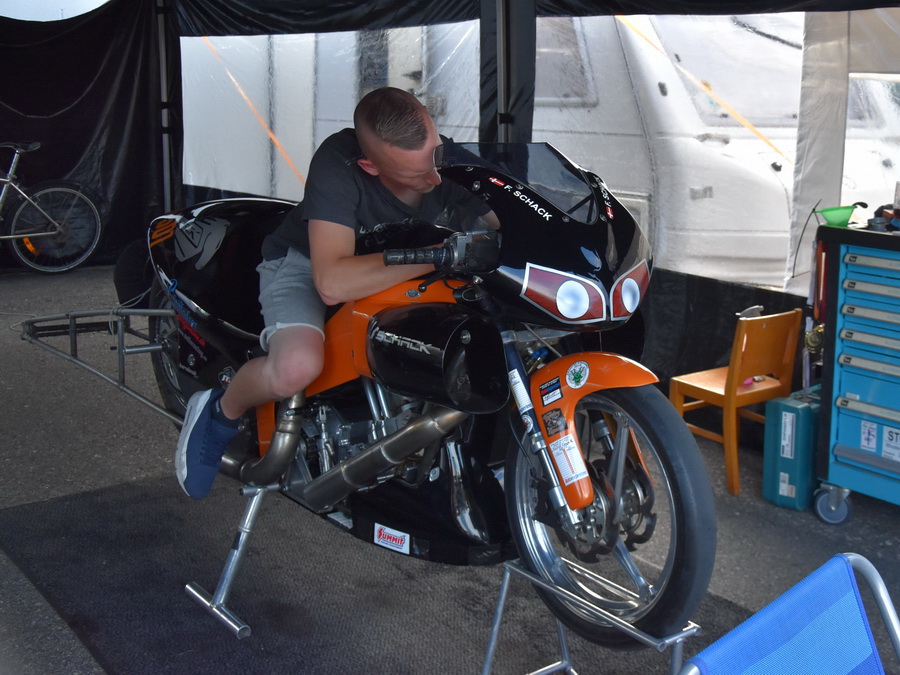 Schack still leads the championship but Joerg Lymant and Jan Malmberg are very close behind. There are many points at stake in a 16-field race. So far we only had 8-fields this year, making the NitrolympX extra important. Thank you Jerry Lackey!

The original time plan was quickly binned when there was a problem with the tree and then a huge oil spill by a ProMod car. The FIA and UEM classes ran at fixed times, so the Topgassers only got one round on friday afternoon.

Schack's first run was with ProstockBike and after his usual launch, the bike was shut off, and Frederick gave up and cruised to the end.

Patrick Kras, who had made his comeback three weeks ago in topgas, was racing in the Prostock class. 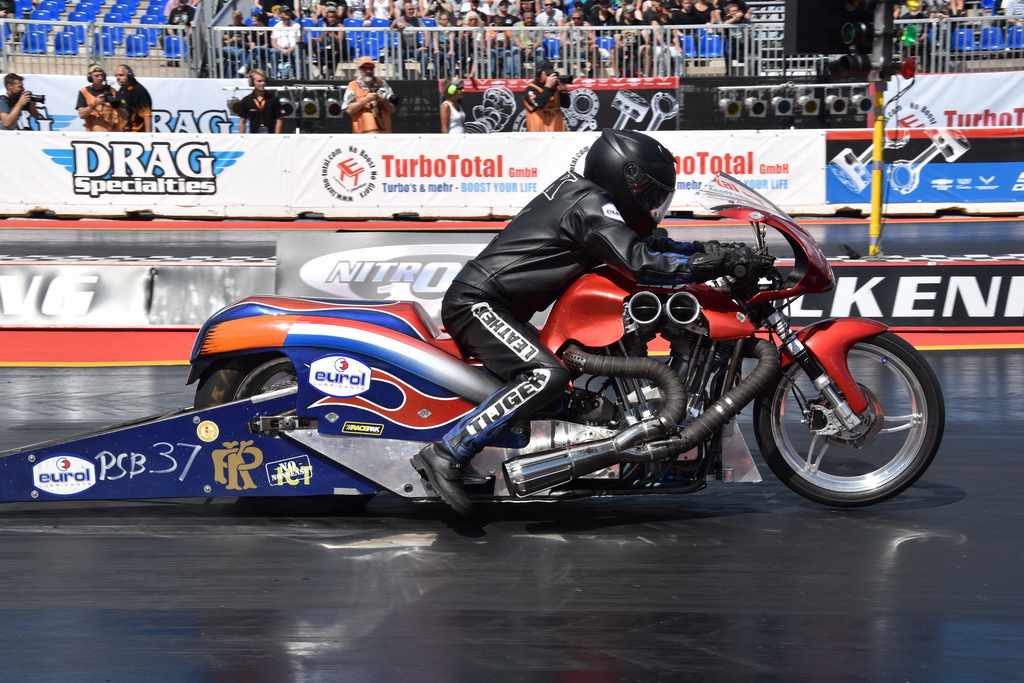 And made great progress, qualified with an 8.14 on saturday, very close the personal best that he ran 14 months earlier, just before he got an accident on the road. Patrick will race with the topgassers at our finals at Drachten next month.

Chris van Nimmen from Belgium was still wrenching and rebuilding his "American Lifestyle" bike at Hockenheim, four weeks after he wrecked his 4-cam motor. Chris now has a Dekron 4-cam in his Hawaya-frame. And got it race ready in the afternoon.

The topgassers lined up in the afternoon, and Dirk Waterschoot from Belgium was first in line. Just like van Nimmen, Dirk had also suffered severe engine damage four weeks prior to the NitrolympX, but the hard work by Dirk and team "Lucky Dice" payed off. 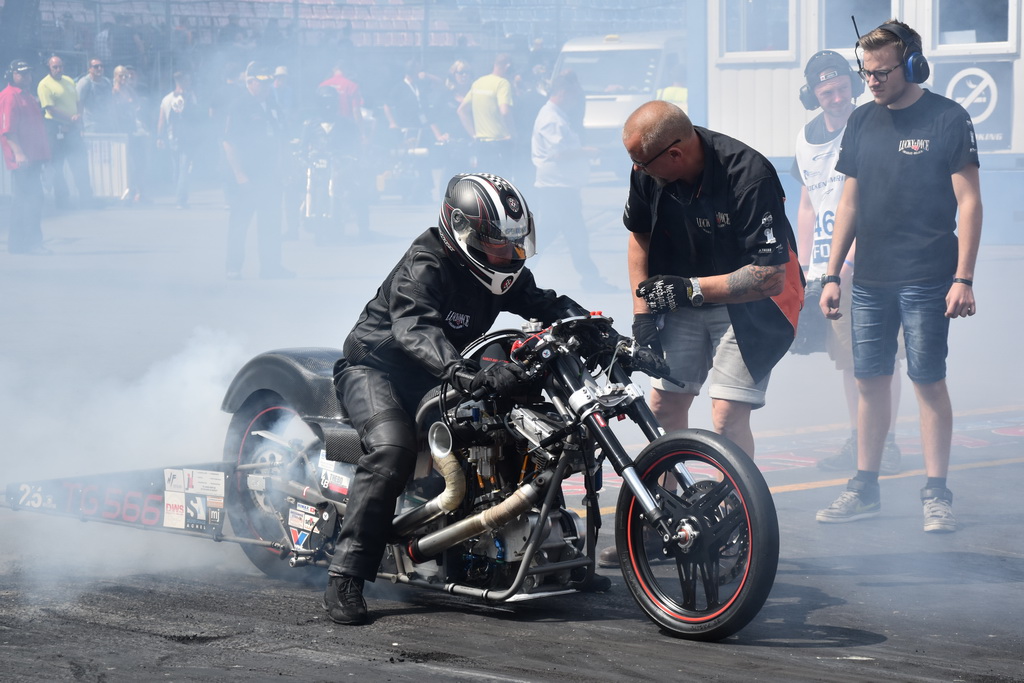 More about him later...

Three V-Rod Destroyers had entered the race. Sven-Ole Schleichert from Germany was at all topgas races so far this year, and it was the first time out for his teammate Mike Krueger (below, right lane). 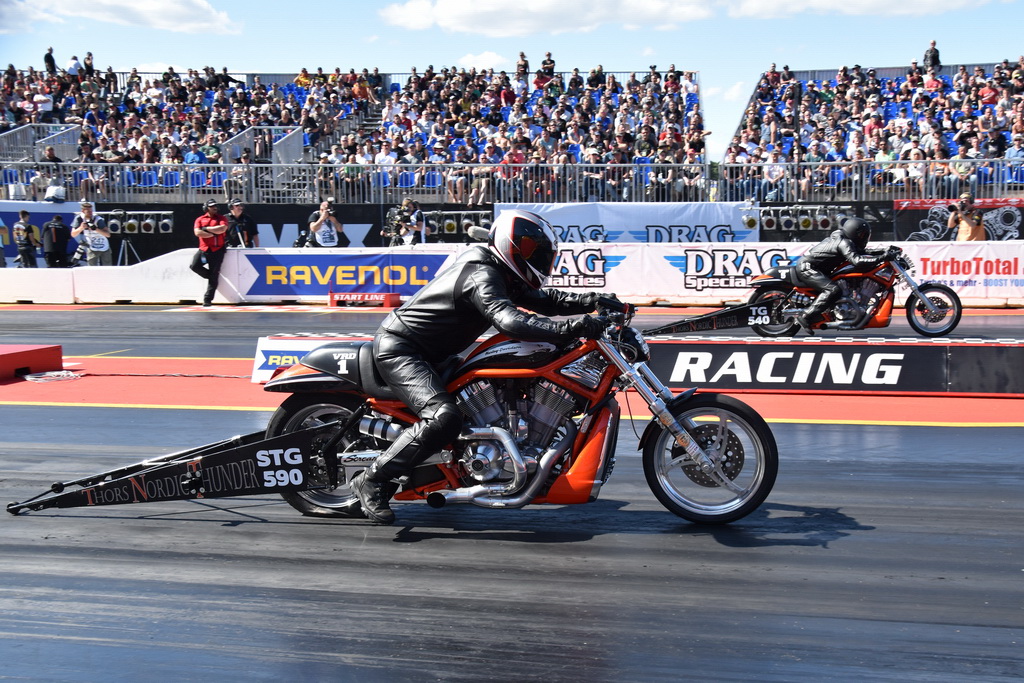 And the quickest guy on a Destroyer was Sascha Brodbeck from Switserland. 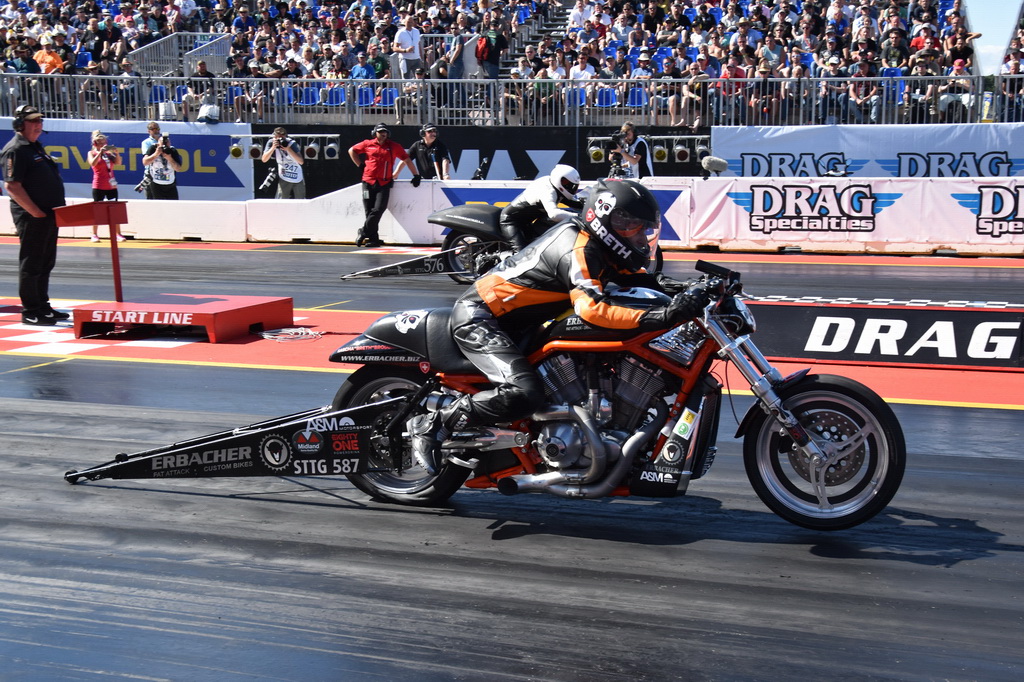 Brodbeck had already been testing at Drachten to prepaire for this event, and had found a workable baseline there. Sascha went quicker every round and qualified in the top eight.

Joell Dalla Vechia was the quickest of the three riders from France. 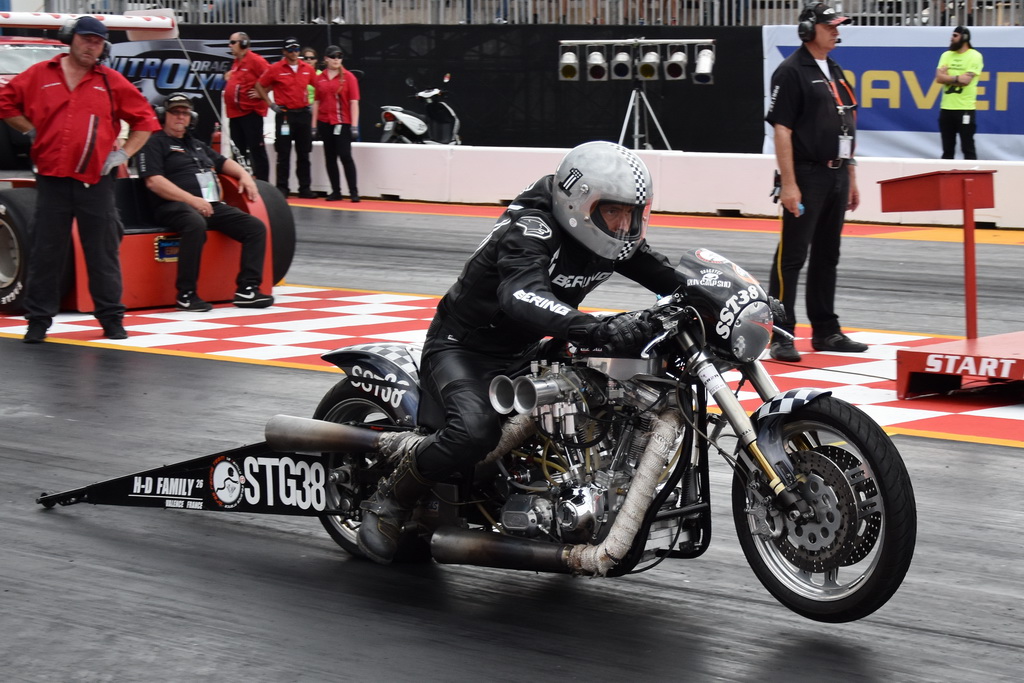 Joell did a new personal best of 9.10 in the qualifications on the Ex-Laseur twincam powered dragbike.

The loudest bike in the topgas class is probably the homemade bike by Otto Bauer, now owned and further developed by Martin Buehler from Switserland. Martin had already attended the "public race days'" and is making much progress. 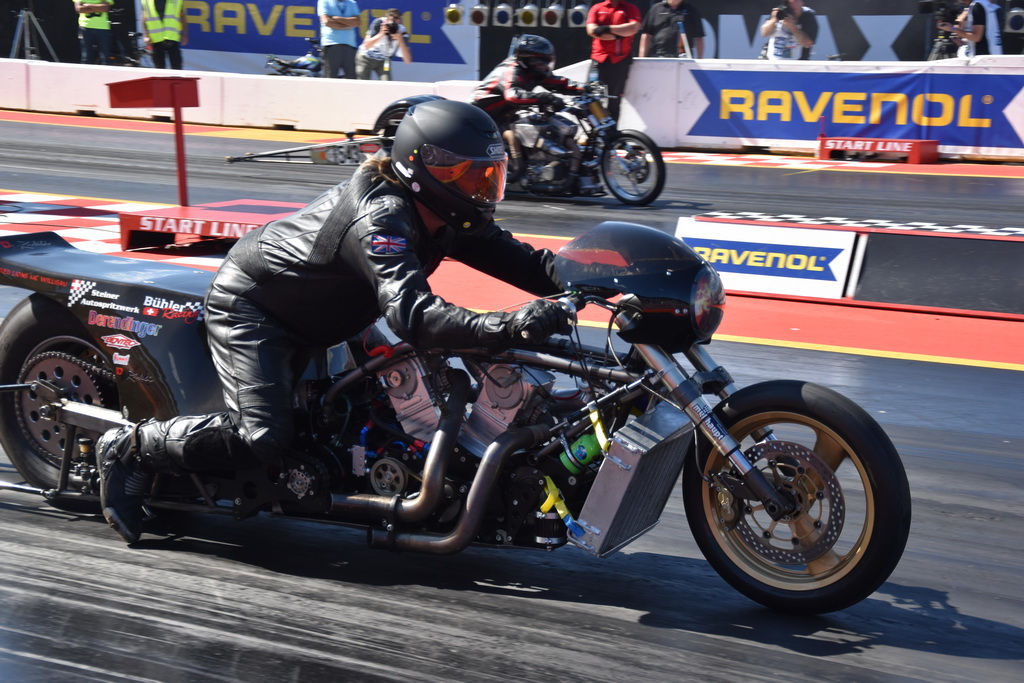 Martin did a 9.2 on friday and then an 8.8 on saturday. A new personal best. Well done, Mr Buehler!

Gerd Caspari and Cord Albers lined up against each other during the qualifications, and were on top of the list after the first day. 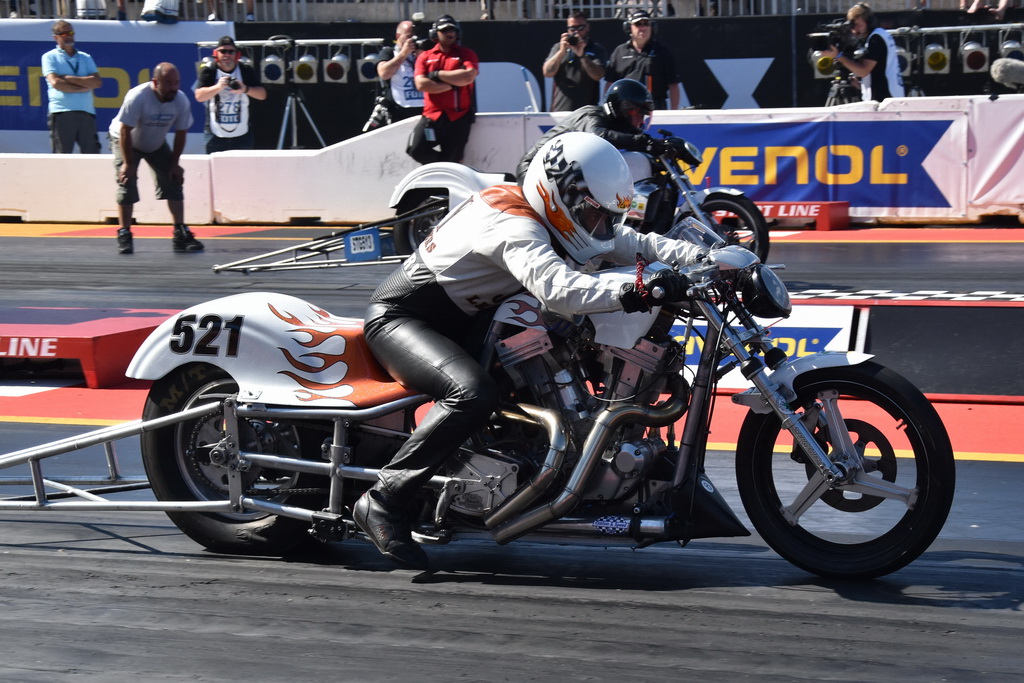 Gerd Caspari improved on the second day, Albers (on the gaselerator) did not. 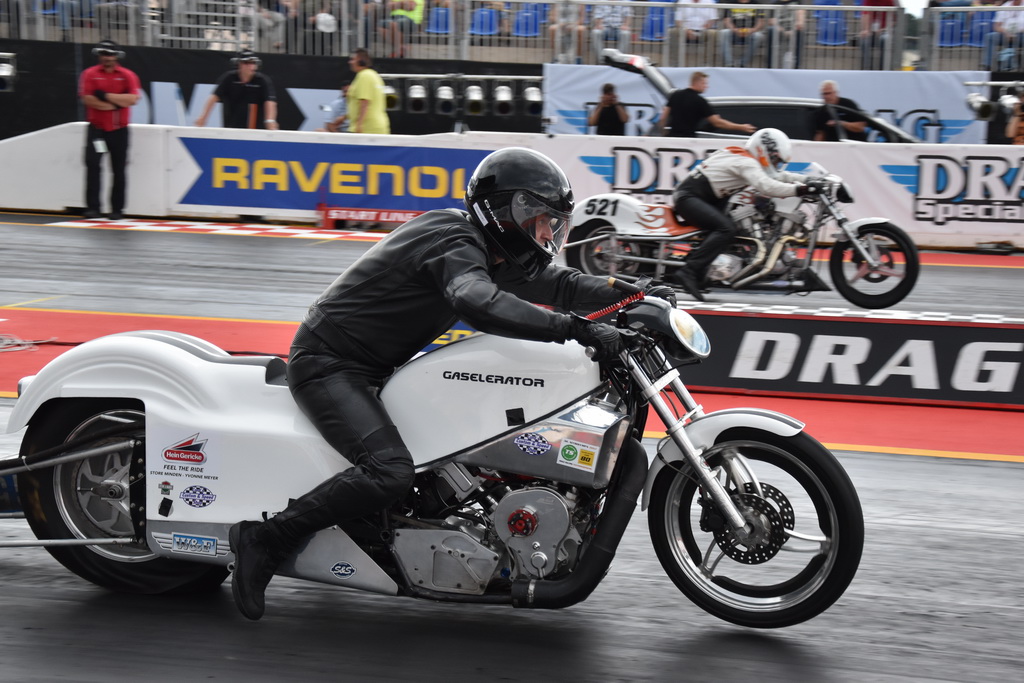 Peter Niklas and Christian Bruhn of team "Sideburns" from Germany both did their personal bests a few years ago at Hockenheim on the turbocharged Honda build and tuned by Bruhn. Bruhn's p.b.of is slightly quicker, and Peter now had a chance to do better then 8.5 seconds

Niklas did a 9.2 on friday. On saturday he made a huge burnout followed by a good run for the first 300 meters, then the bike lost power. Still an 8.7 for Peter, good for qualification place #4. For what it's worth, the engine was beyond quick repair, and Peter was out for sunday. 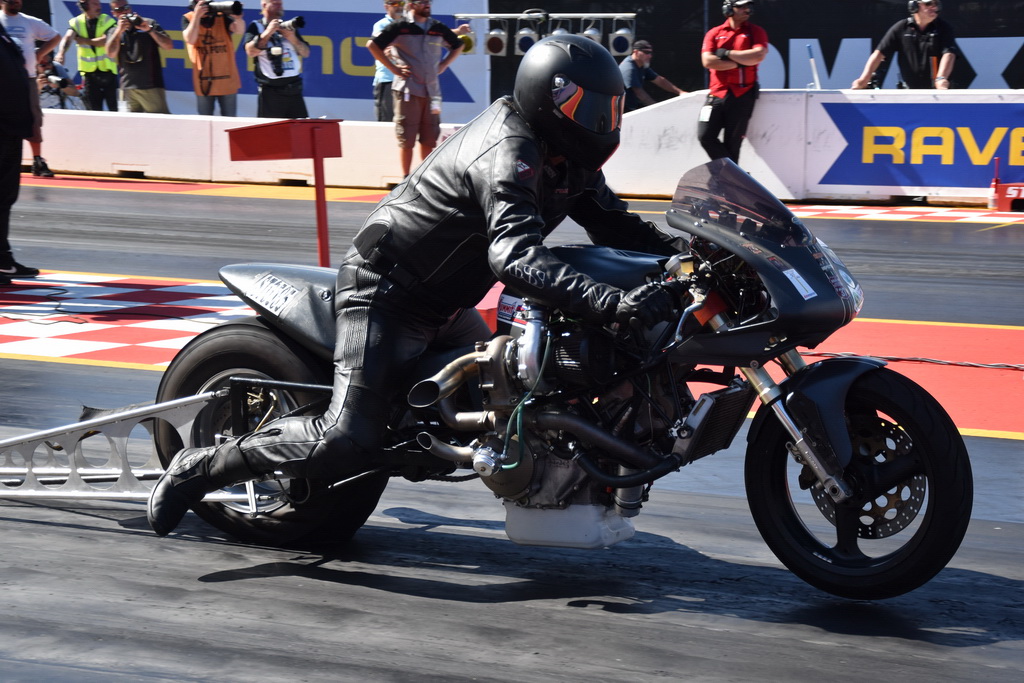 Both Christian and Peter will race an American V-twin next year, and the Honda will be used as a spare. 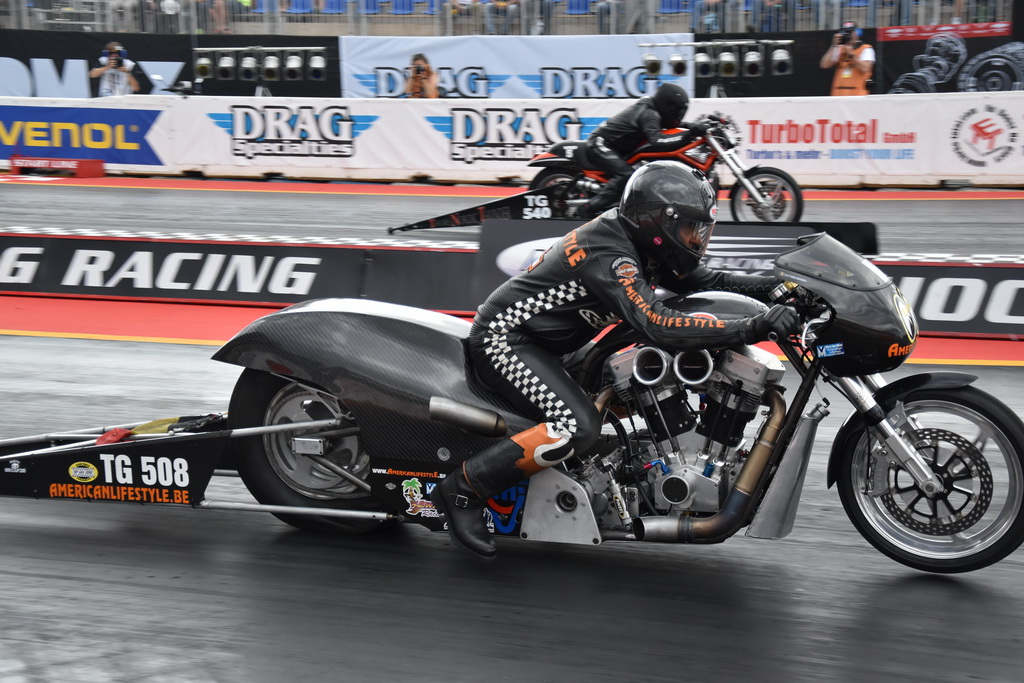 Joerg Lymant qualified # 3 on friday, but hit hard on saturday and got on top of the list. 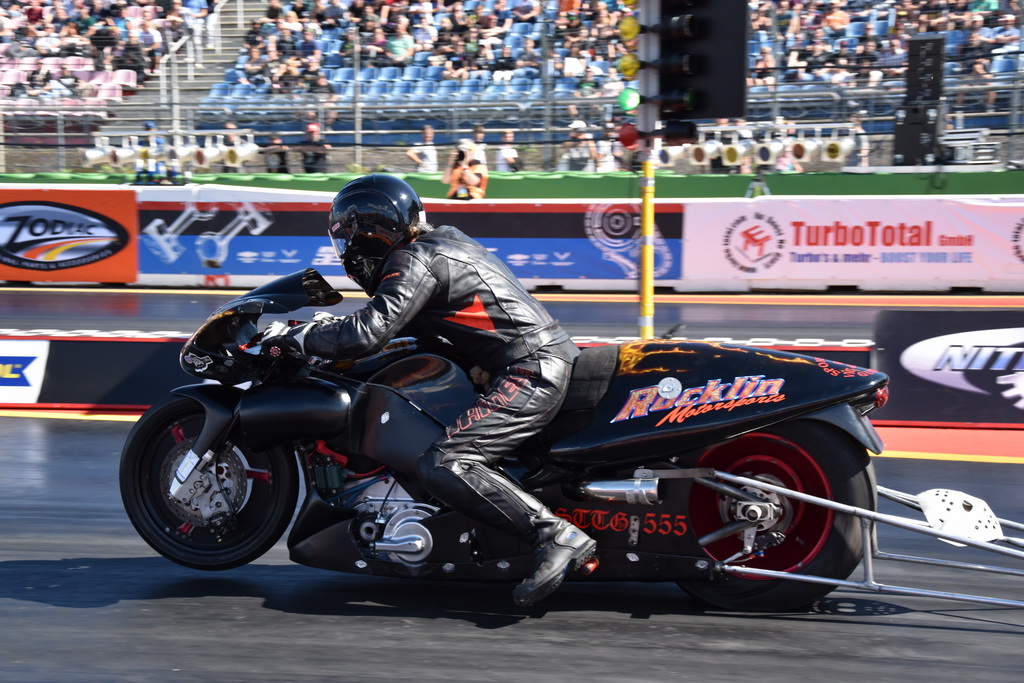 Frederik Schack was the last topgasser to run on saturday. 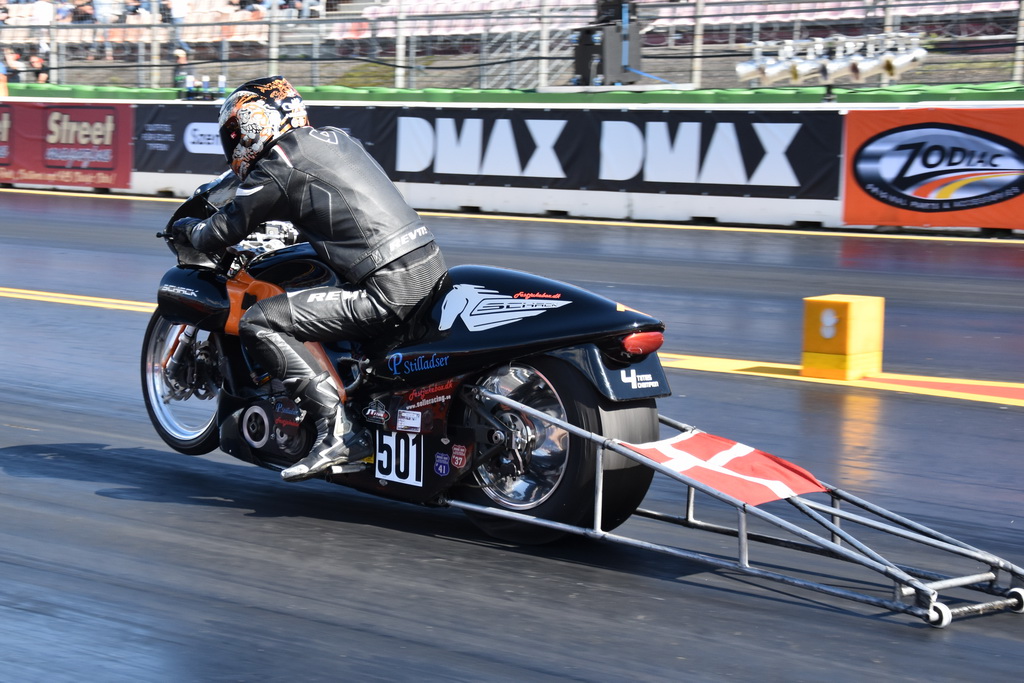 The bike went to the right again, and Frederik went off throttle and let ot go. A huge upset in the race for the 2017 championship, Team Schack Schack did not qualify! They packed and left early on sunday and had already made an appointment with Jesper Thiel on monday.

Olaf Menzi did not manage to set a time on friday, and qualified # 16 on saturday. 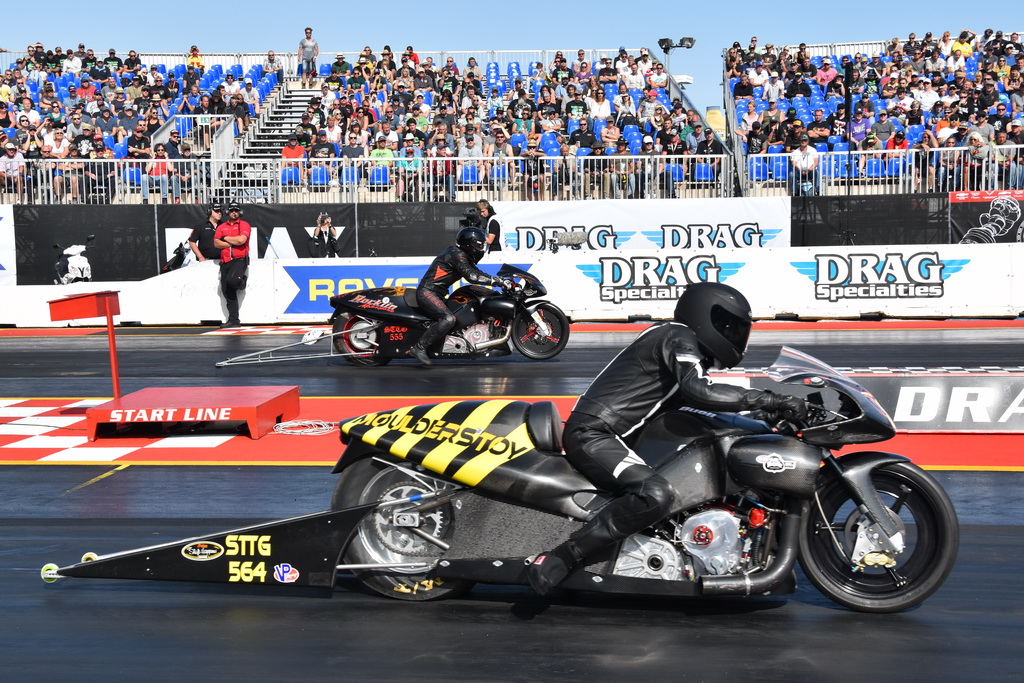 No suprise he was eliminated in the first round on sunday by Mr Lymant.

Sacha Brodbeck had done a 9.5 on friday, and a 9.45 on saturday. On sunday he was up against Joerg Braune (also pictured at the top of the page with his wife and unborn daughter) who qualified # 9. 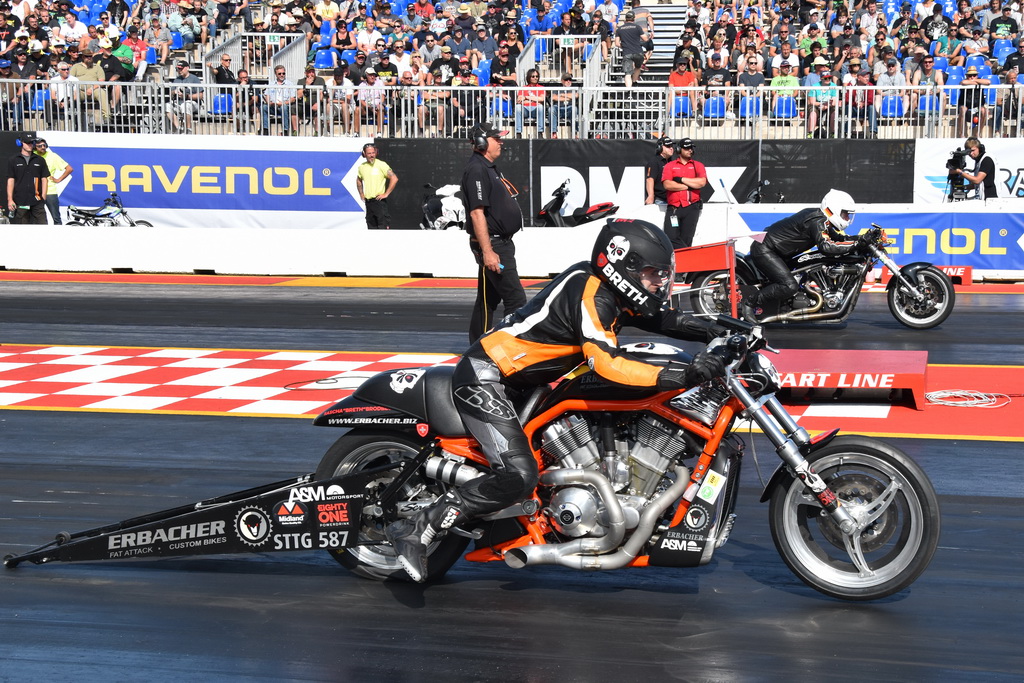 Sascha had the better reaction, and his 9.39 was too quick for Braune. Brodbeck had exactly the same reaction time and did 9.37 in the quarter finals, where he became the victim of Joerg Lymant.

Janek Severa from the Czech rebulic had a bye-run in the 1/8 finals because Niklas was out ant the two alternates did not show up. 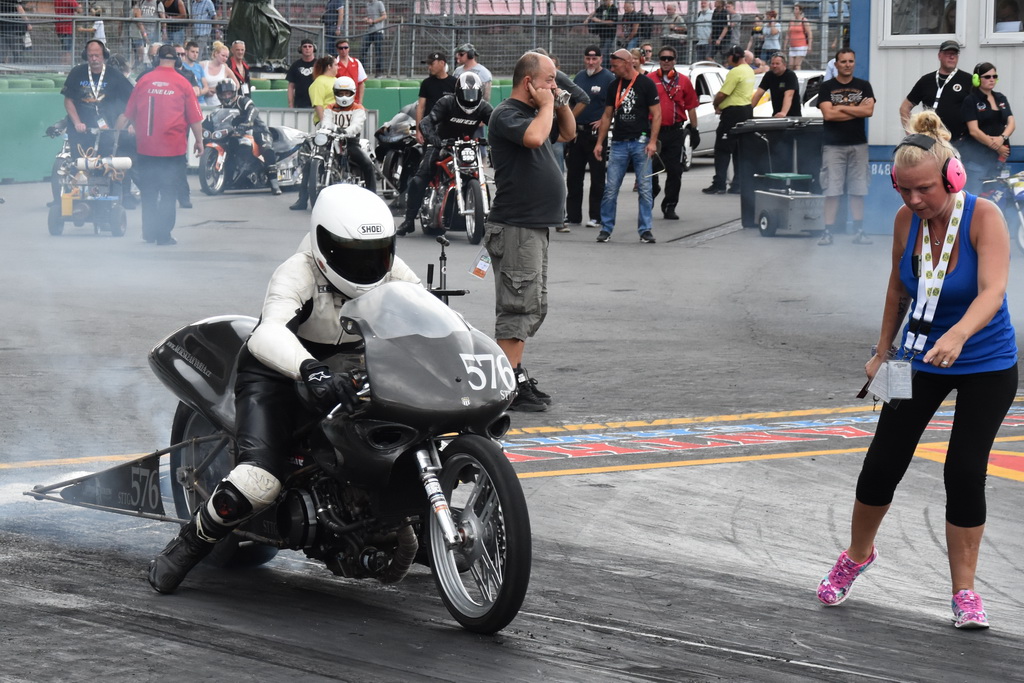 Janek is still trying to find the right set-up to do his first nine second run.

Dirk Waterschoot beat Chris van Nimmen in the first round, and then took out Maik Krueger (below, left lane), who had advanced to the quarter finals after Cord Albers went to the left side and had problems with the handling of his bike and gave up. 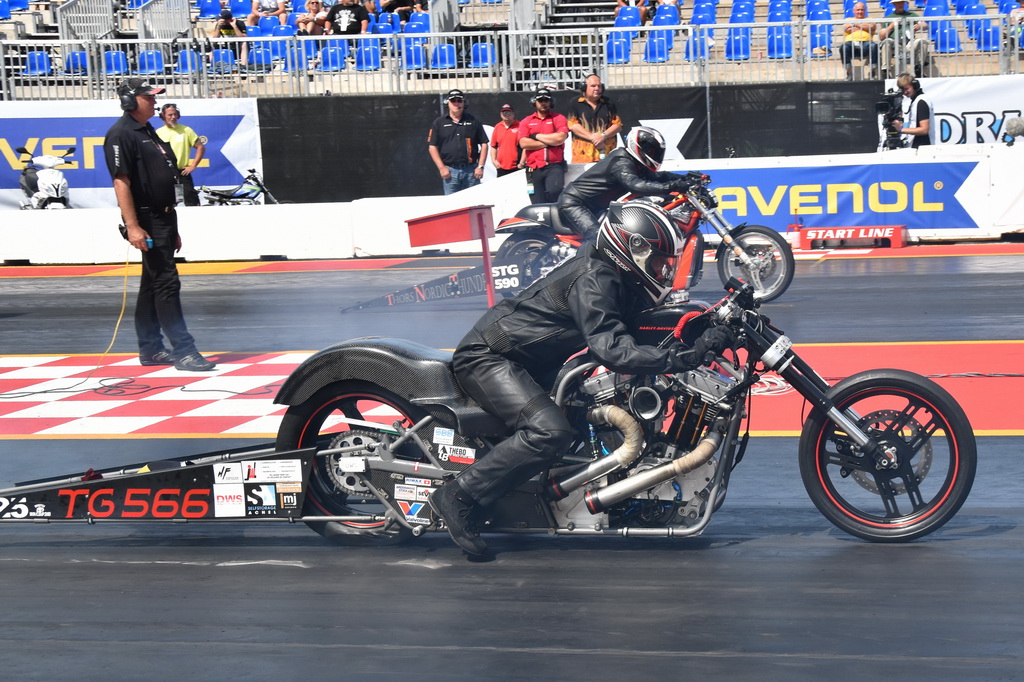 Jan Malmberg did a 60-foot of 1.10, but bike lost power at the second half of the track during the qualifications, and he landed at place #10 with ten seconds. But all went well on sunday morning for Team Sweden and Jan eliminated Joel Dalla Vechia in 7.89 seconds.

Caspari had already taken out Yann Genissieux with 8.36, and did another 8.36 against Malmberg, but Jan reacted better and did a great new personal best of 7.846 @ 275 Kmh.

A great launch for Jan Malmberg in the semi finals, but a red light! 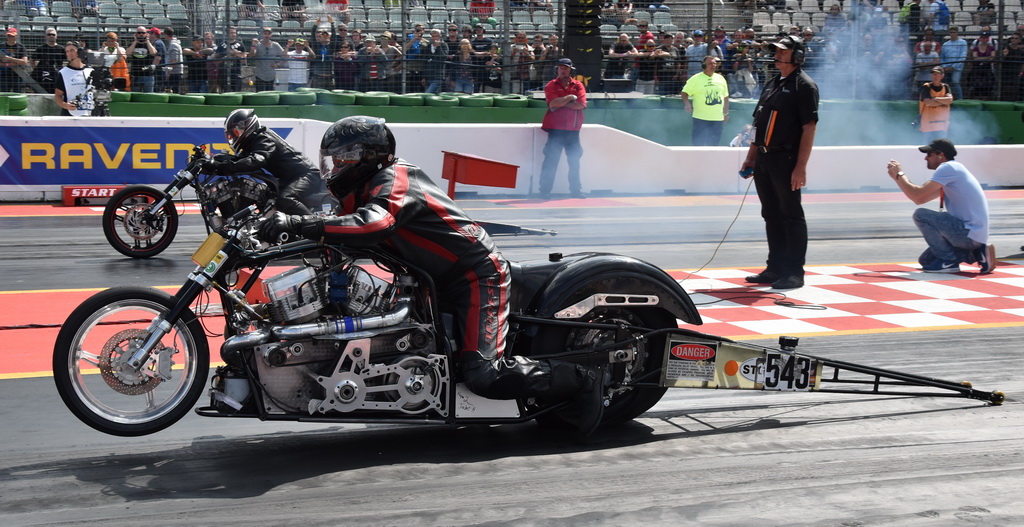 No mistakes for Dirk Waterschoot and into the finals.

Sven Ole Schleichert did hid first nine second run ever on sunday morning when Martin Buehler redlighted. And Schleichert did it again when he took out Janek Severa in the quarter finals. Schleichert reacted better then Lymant in the semifinals, but Jörg went quicker again and advanced without a problem. 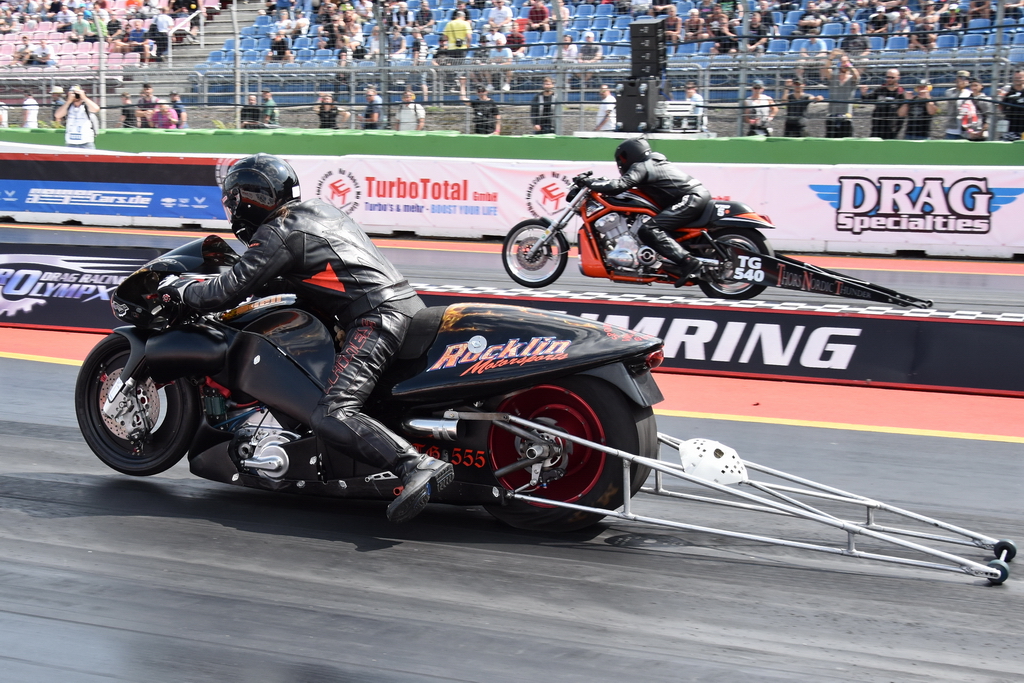 Schleichert did a new personal best again, now 9.8 second, and won the the award for third place.

And Joerg Lymant save his best for last, the finals. Joerg reacted quicker then in the previous rounds, did his quickest pass of the weekend, grabbed the topspeed points (282.15 KmH), beat Dirk Waterschoot and won the race. Well done Joerg and team!

Lymant leads the championship with a big advantage over Schack, who is on place #3 now. Malmberg (on place #2 after Hockenheim) was disapointed after his redlight, but happy with his new personal best and optimistic for the next two races.

Mosten Raceday in Denmark is next, with 21 topgassers on the entree list. Some of the quickest topfuel bike in Europe will battle there for the crown!