The sky was cloudy and it rained for a bit on thursday when most of the teams arrived at the Bode Eng Vej, and some rain interrupted the qualifications on friday for a while. But no rain on race day, and the sun came out on saturday afternoon. The track was well prepaired, as always.

Olaf Menzi was first in line for the first round of qualifications. 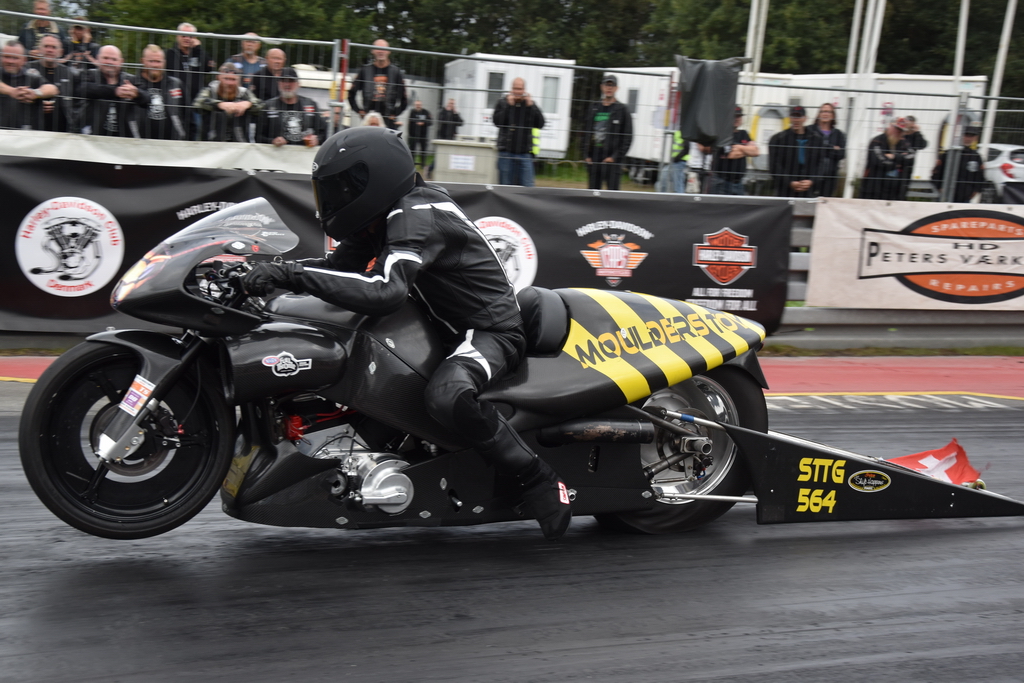 Olaf did a great new personal best at the last race, and stopped the clock at 4.78 at Mosten. 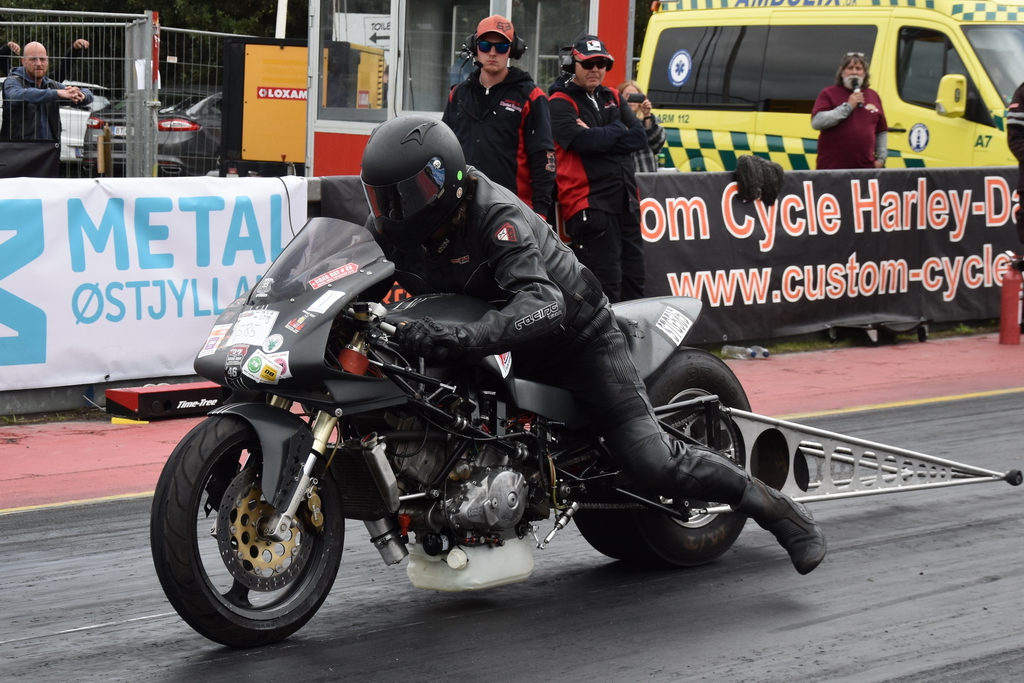 Peter Niklas on the turbocharged Honda had to to pull the clutch during his run to keep the engine running and to make it to the end.

Martin Buehler had attended all Euroserie races this season, and was at his best at Drachten. 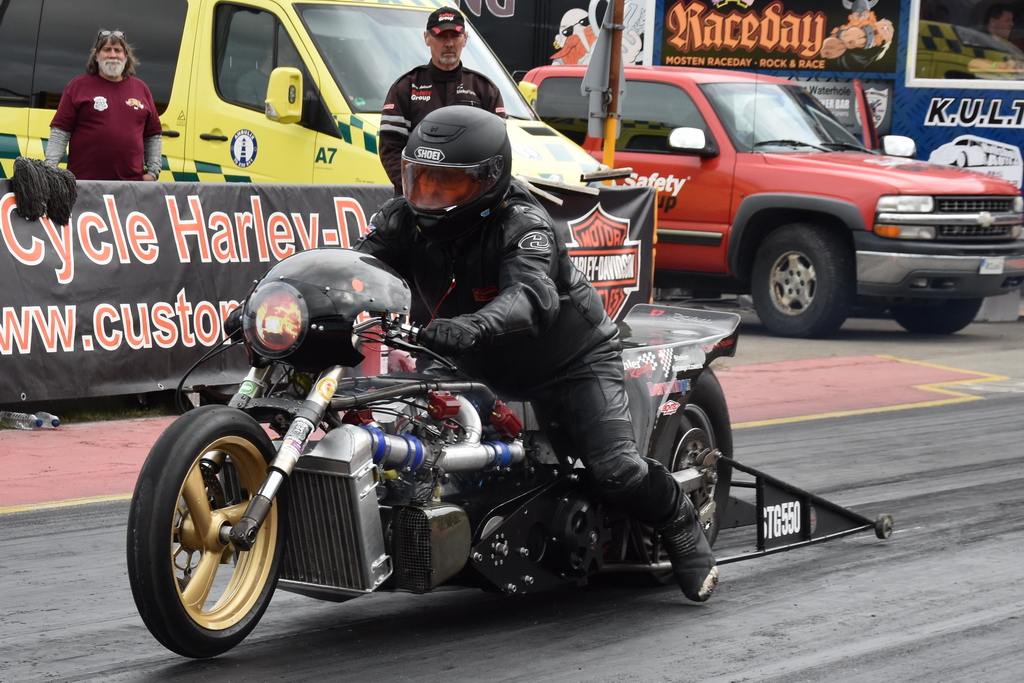 Martin suffered from mechanical problems at Hockenheim, and again at Mosten. 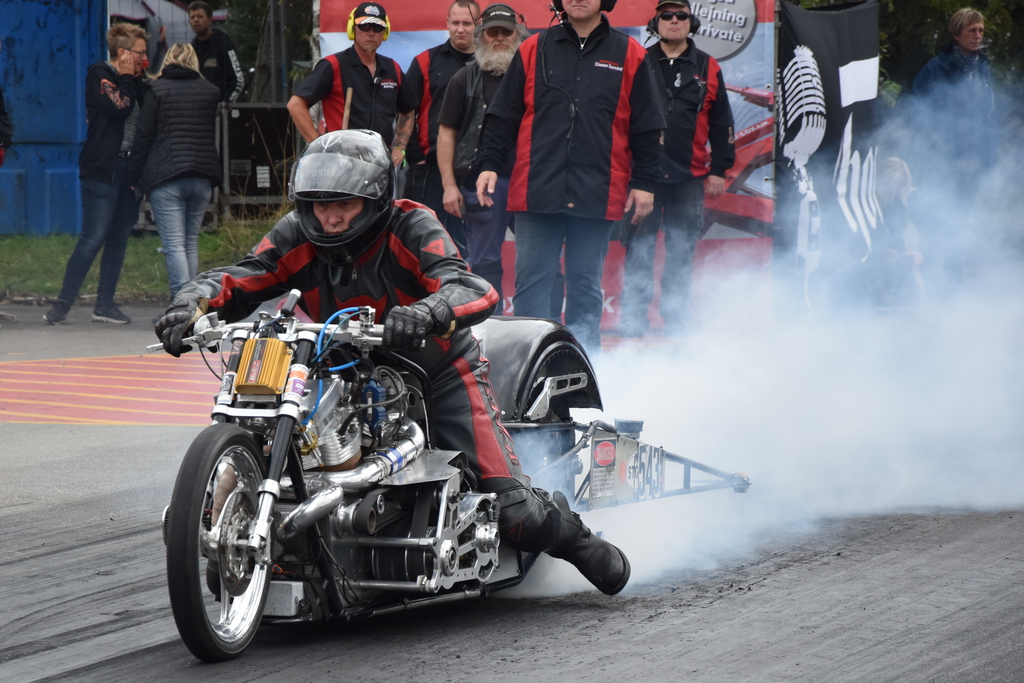 Problems for Jan Malmberg, he shut off after the burnout.

Torbjörn Ström from Sweden is the new owner of Janne Gustafsson's "Yellow Jacket" bike. He raced it in Scandinavia this year, but he wants to do the full Euroserie Supertwin Topgas in 2019.

Torbjörn qualified at place #5 after the first round. 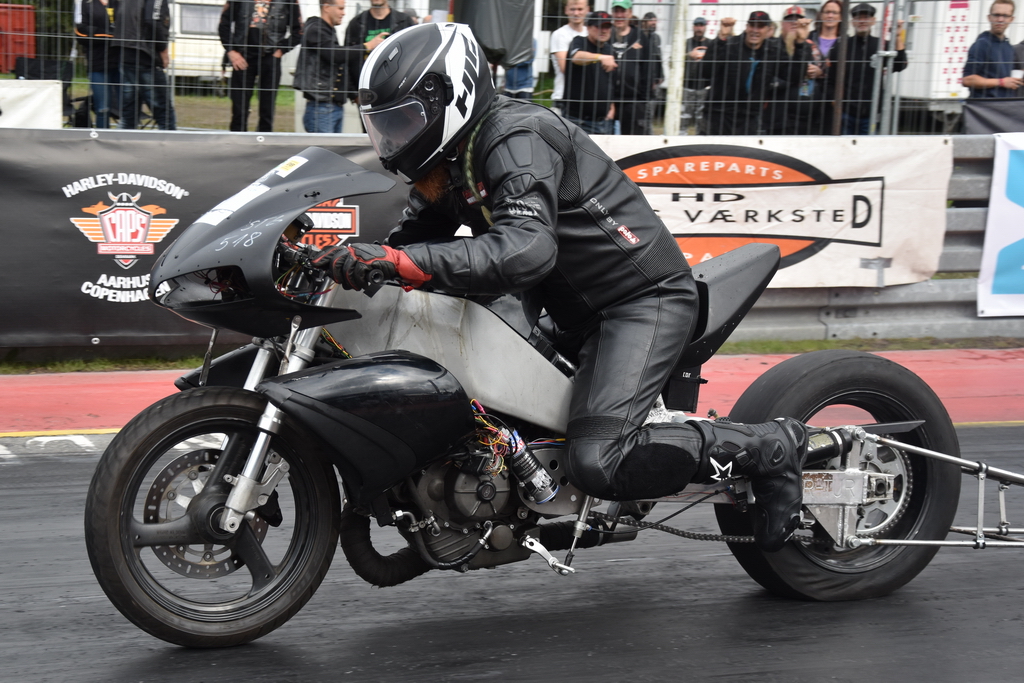 Malte Foit on his Rotax Buell got to place #12. 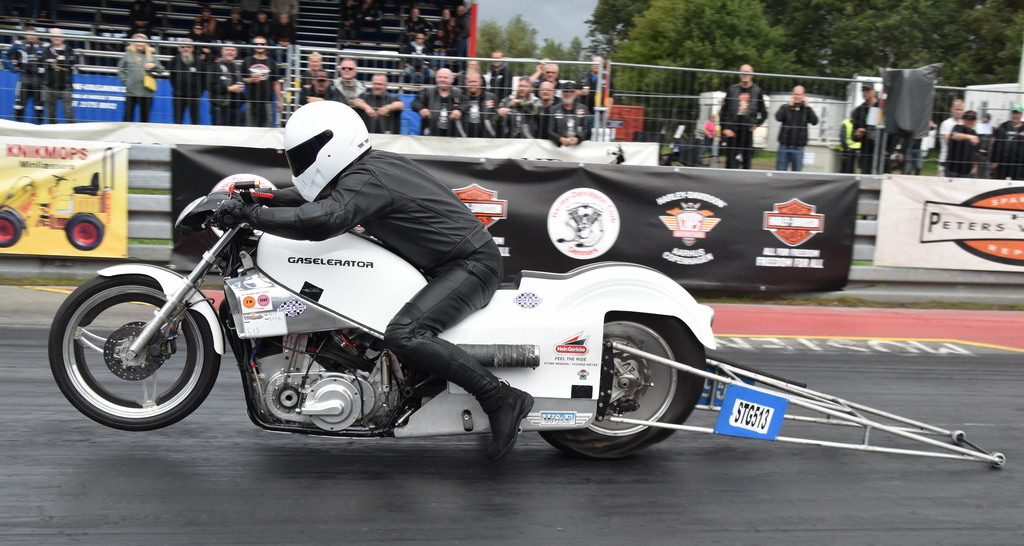 Cord Albers put the second "four" on the scoreboard, but he could not beat Menzi's time. 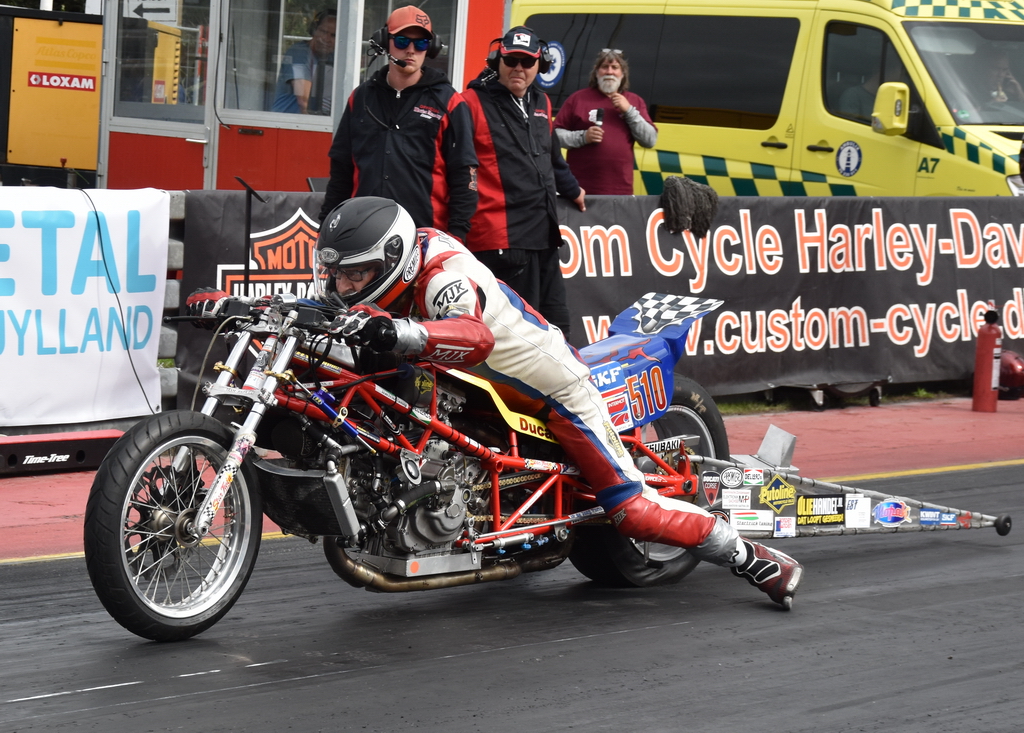 Herman Jolink's Ducati did not lift during his first attempt. 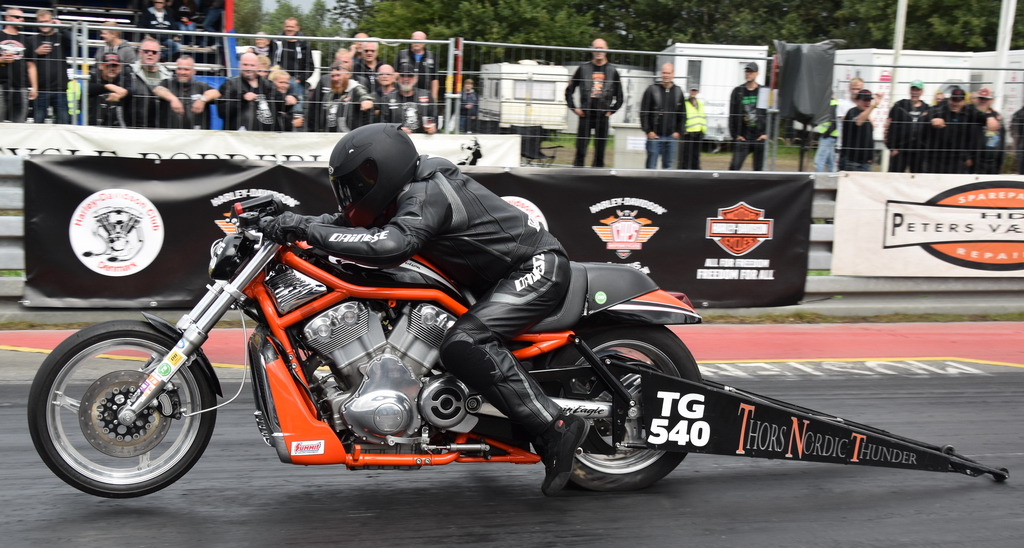 Sven Ole Schleichert attended all six races this season and keeps getting quicker on his Destroyer. 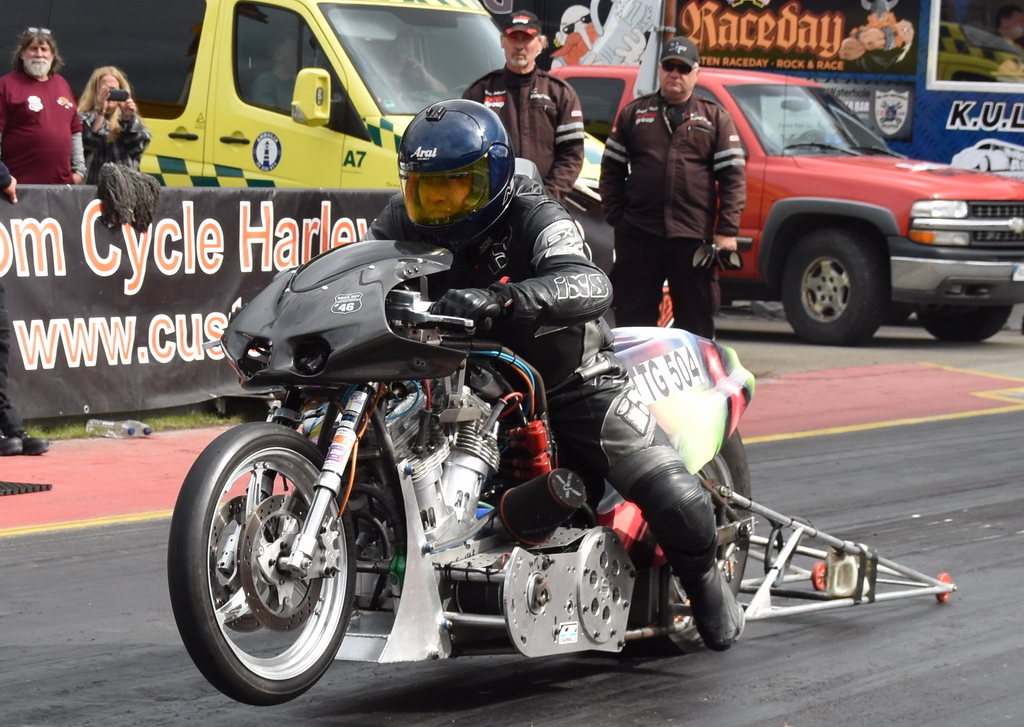 Anders Jensen and his team made some big steps forward in developing the blown Harley this year.  But it did not show in Anders's first pass.

Frank Aaslund from Norway did 5.6, good for place #6 that morning. 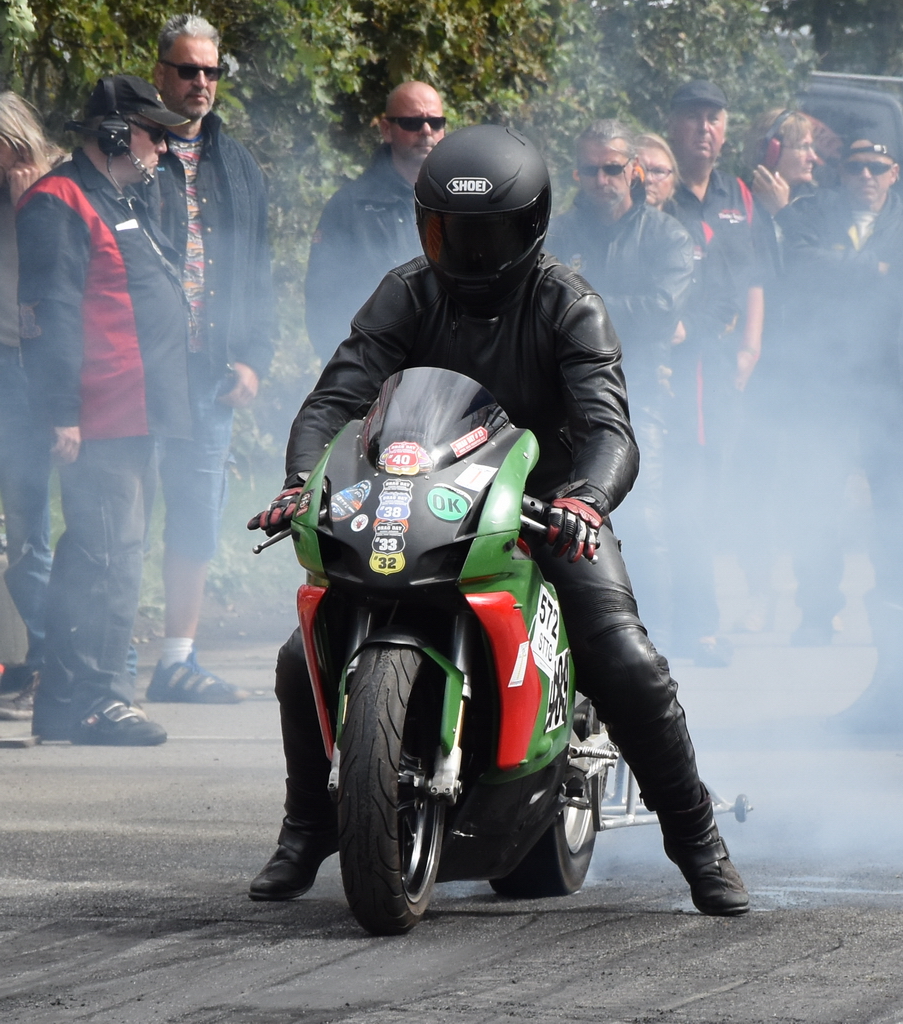 Christian Bruhn had been active as a helper of Peter Niklas at the previous races, but ended the season racing his Ducati. The bike kept hesitating all the way.

Frederik Schack had won the last race, and was one of the favorites. 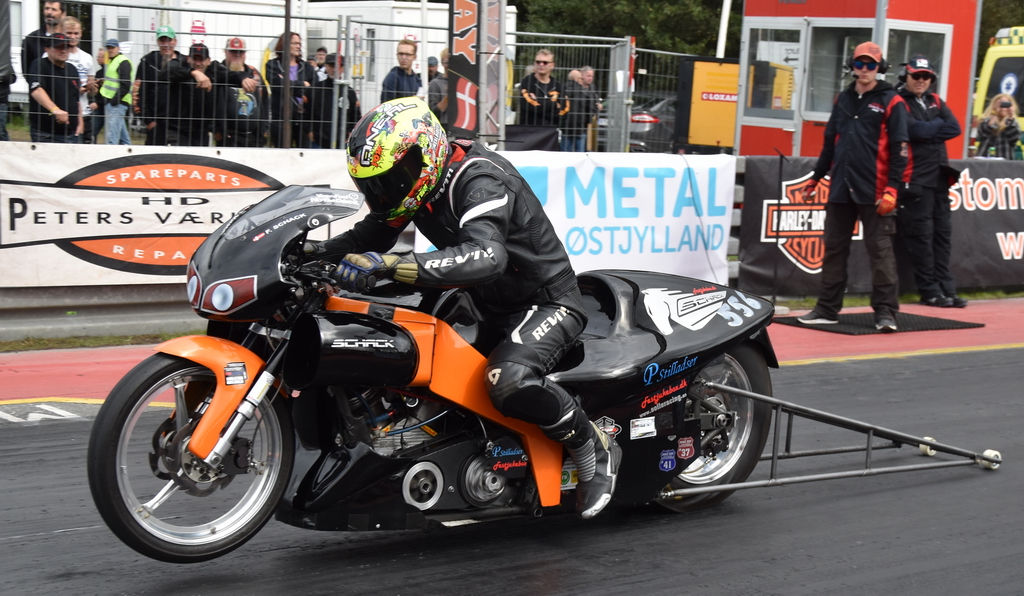 Schack opened with 4.782 second, slightly better then Olaf Menzi, top qualifier at that point, with one more favorite to come... 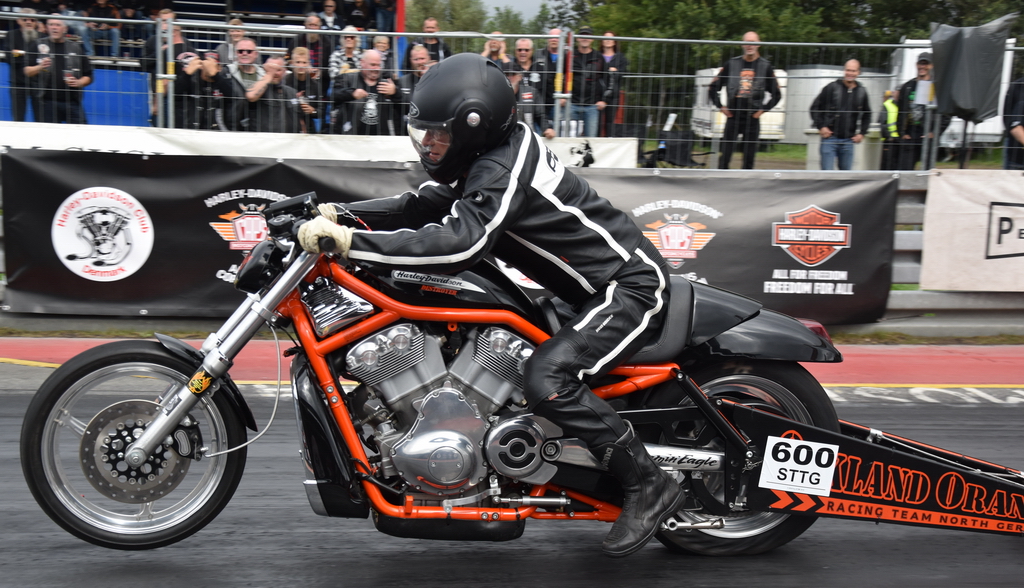 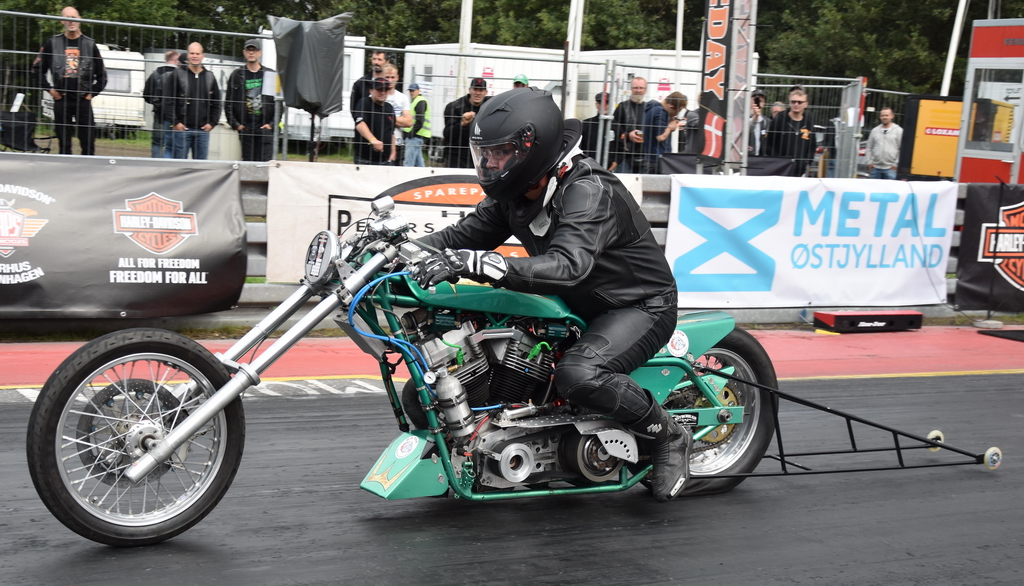 Jørgen Godske from Denmark was at place #14 after the first round. 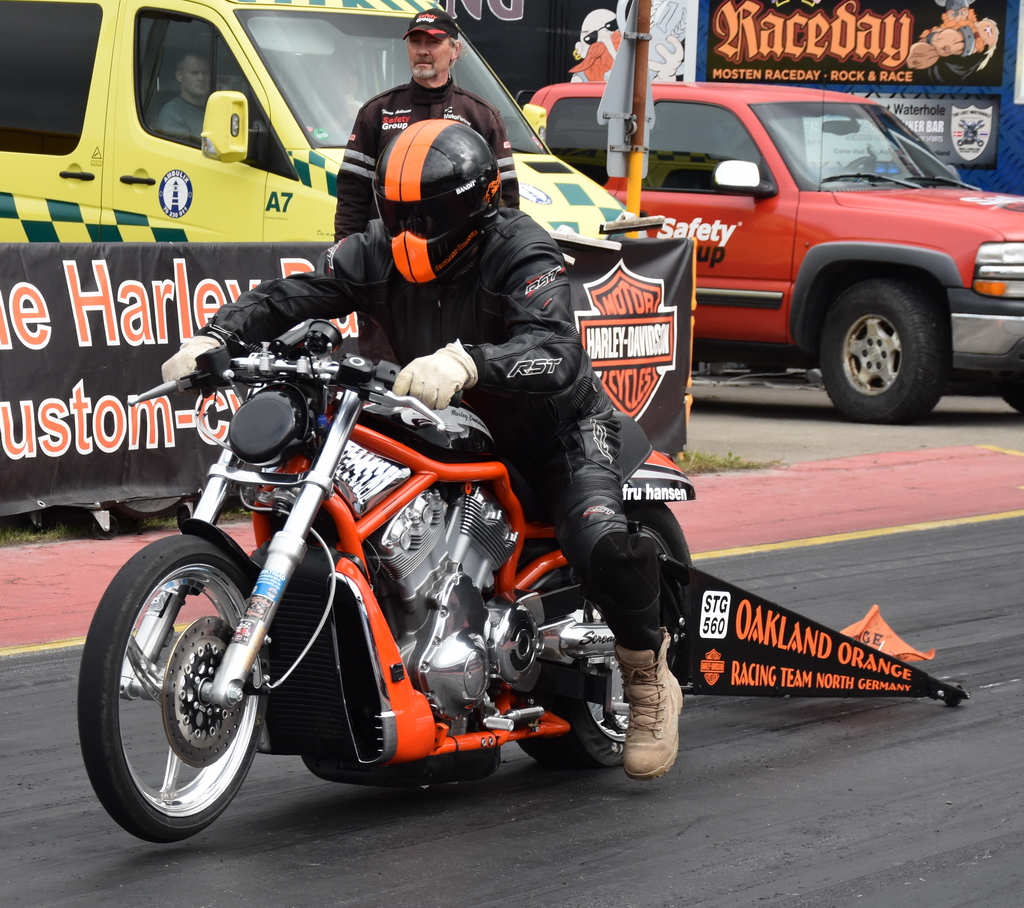 John Hanssen could not beat the time of the other two destroyers.

Joerg Lymant had already won the first four races, and became the 2018 champion at Hockenheim. But was beaten there by Frederick Schack in the finals. 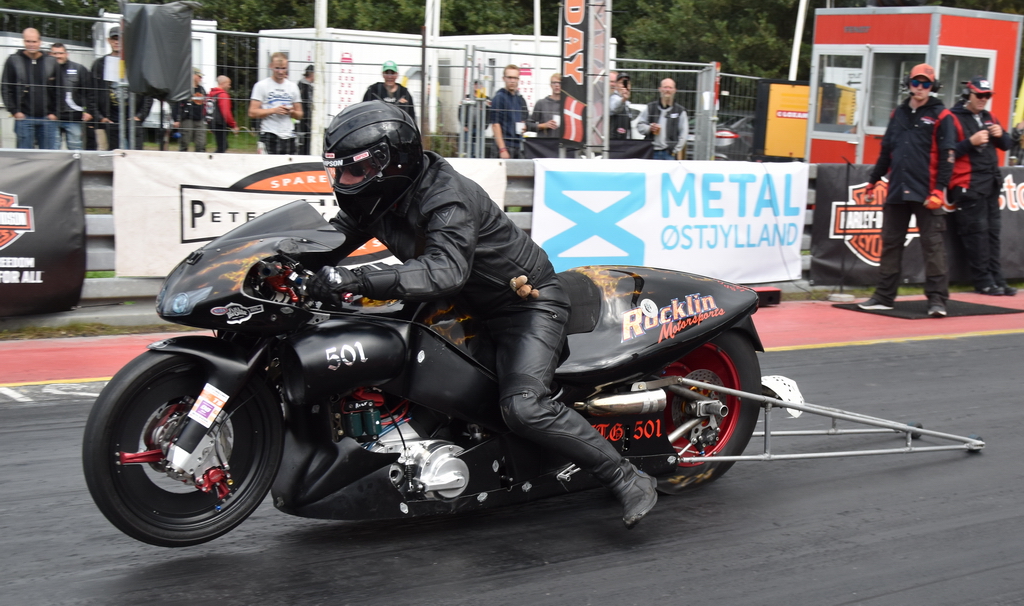 Lymant was very eager to get his revenge, and produced a great run: 4.6, and became the top qualifier.

Jan Malmberg was allowed to try again, but could not make a pass. 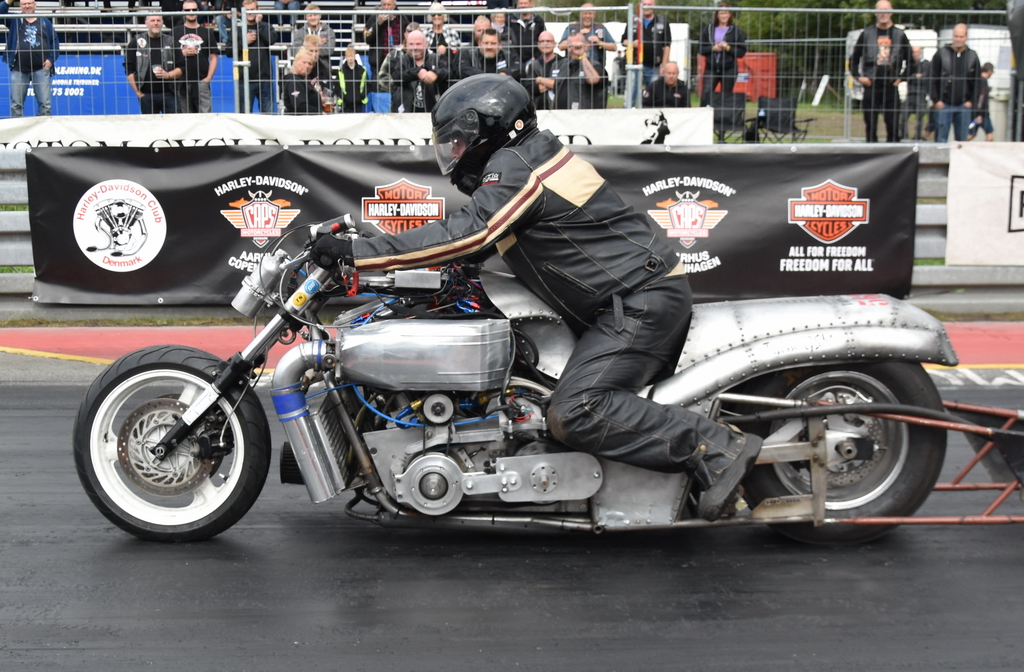 Mats Larsson needed 17.6 seconds to get to the finish. And the bike stayed in the tent for the rest of the weekend.

In the second qualification round, only three racers could improve their times. 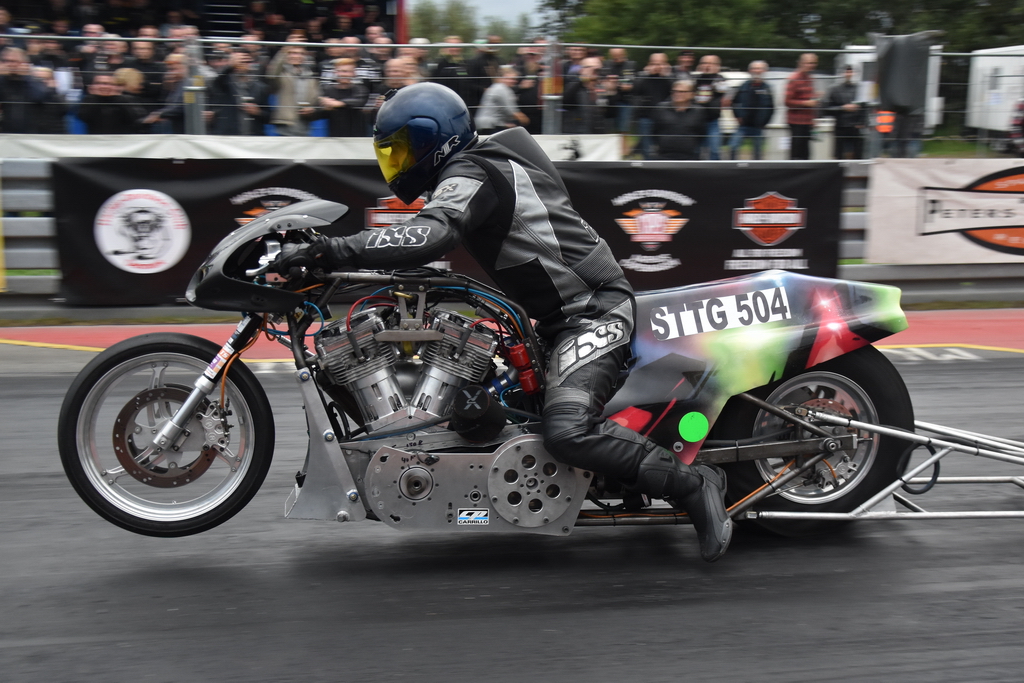 Herman Jolink also did a good pass, and moved from place #9 to #7. 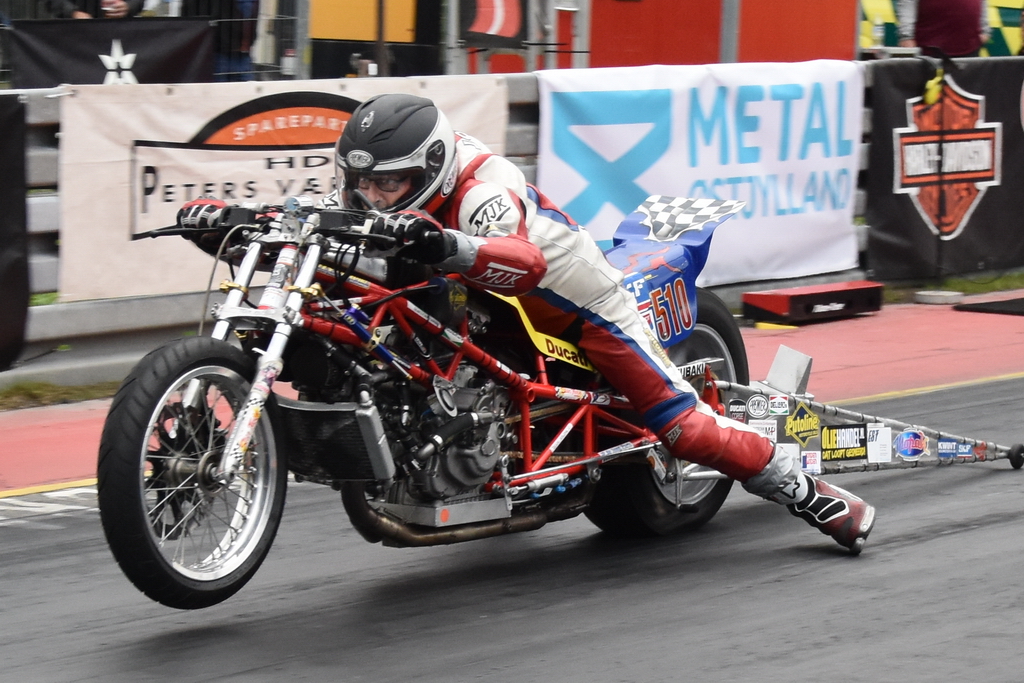 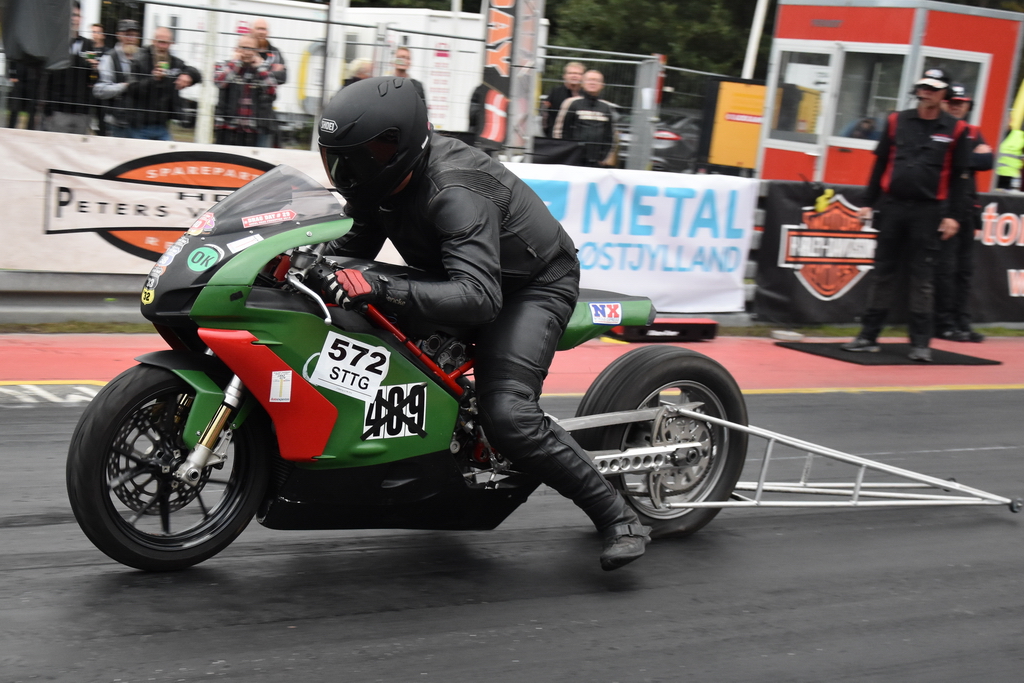 Christrian Bruhn also improved his time, but stayed at place #11

.Malmberg's gearbox jammed at the burnout, and he was not able to make a pass.

Martin Buehler had damaged the front cylinder head of the homemade engine and did not come out in the second round, but watched the action from the grandstand. 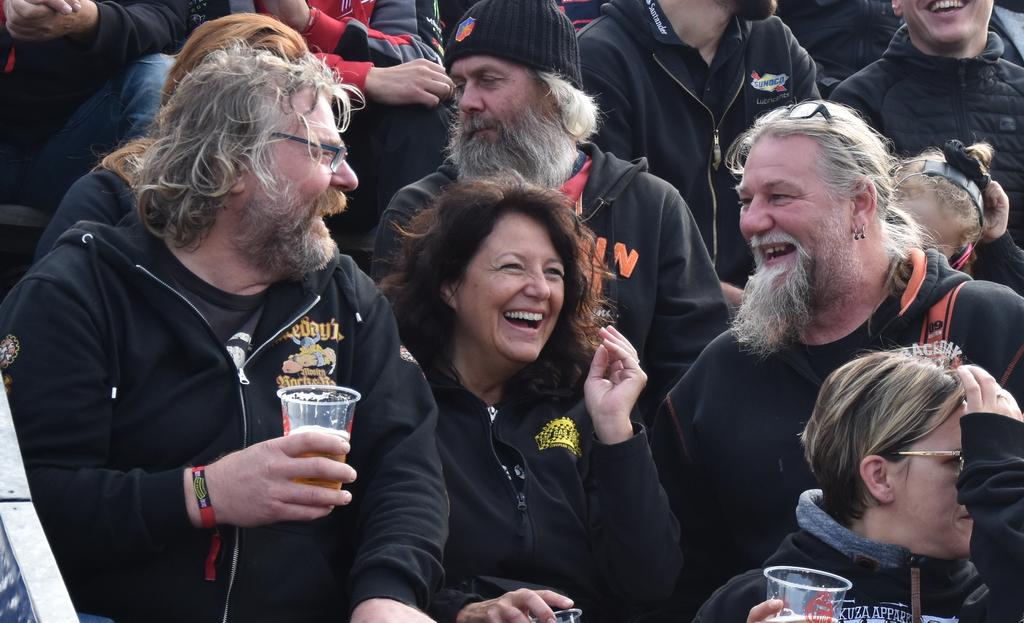 There would be no more qualifications on saturday, and only the top 8 of the list could take part in the eliminations.
The organiser allowed us to run them like a dragrace. But did not include the reaction times in the results.

The #8 went first, and the #1 only needed to be quicker then him.
Frank Aaslund did not make it to the finish. 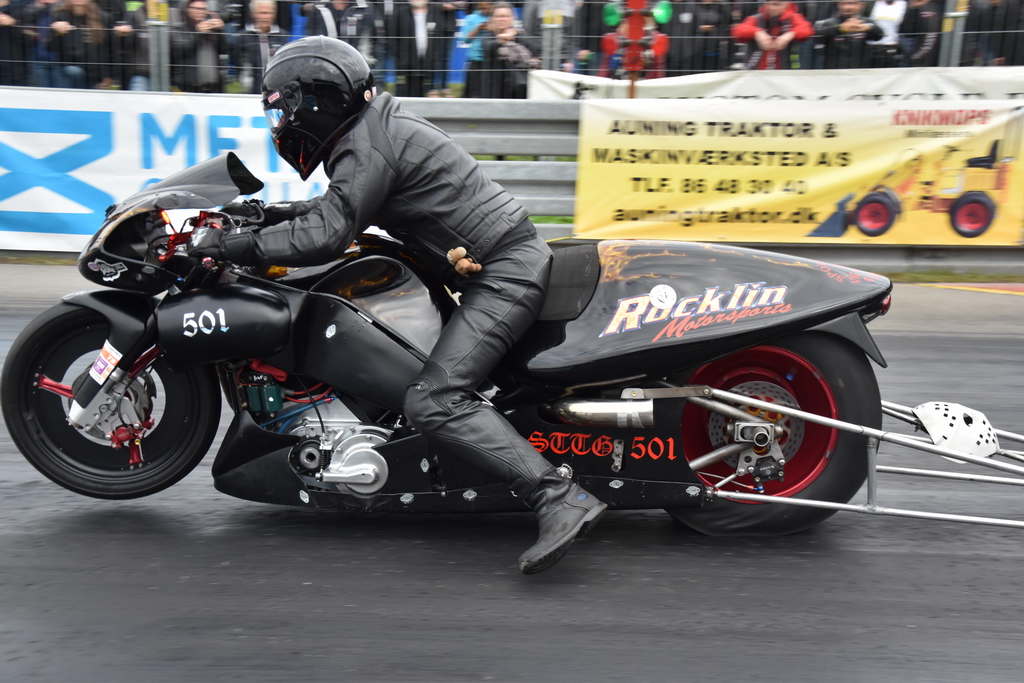 Anders Jensen broke his chain, and did not reach the 60-foot mark. 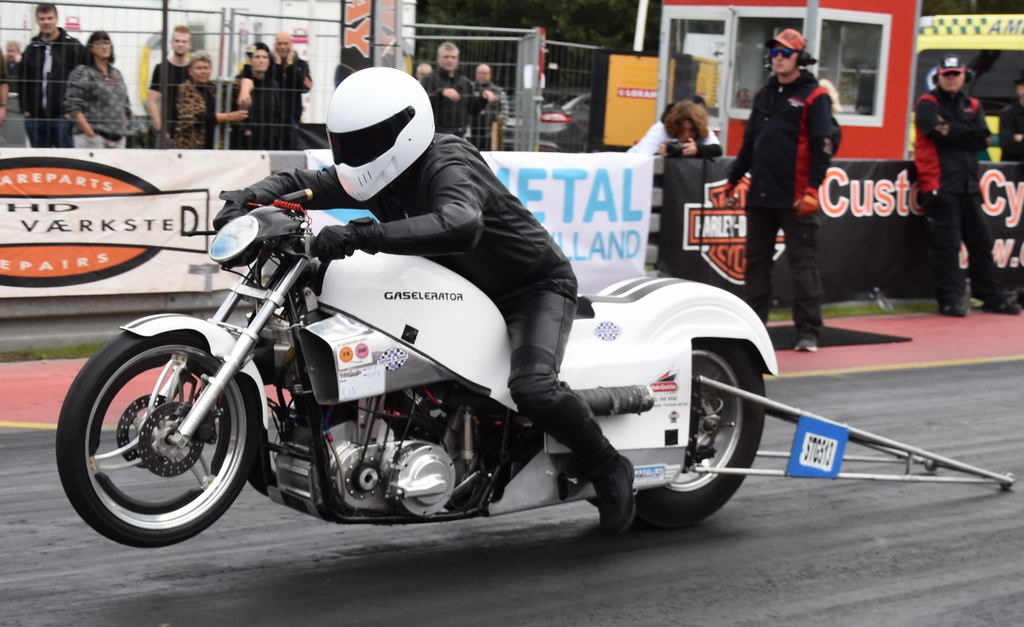 His opponent Albers broke the front sprocket during his run, but reached the finish line after 16 seconds, so advanced to the semi finals.

Herman Jolink did 5.4, but Schack beat his time easily and eliminated Jolink.

Schack's time and speed were almost identical to numbers of his best qualification run.

With Buehler and Malmberg out, Olaf Menzi had big chance of becoming the runner-up in the 2018 championship. 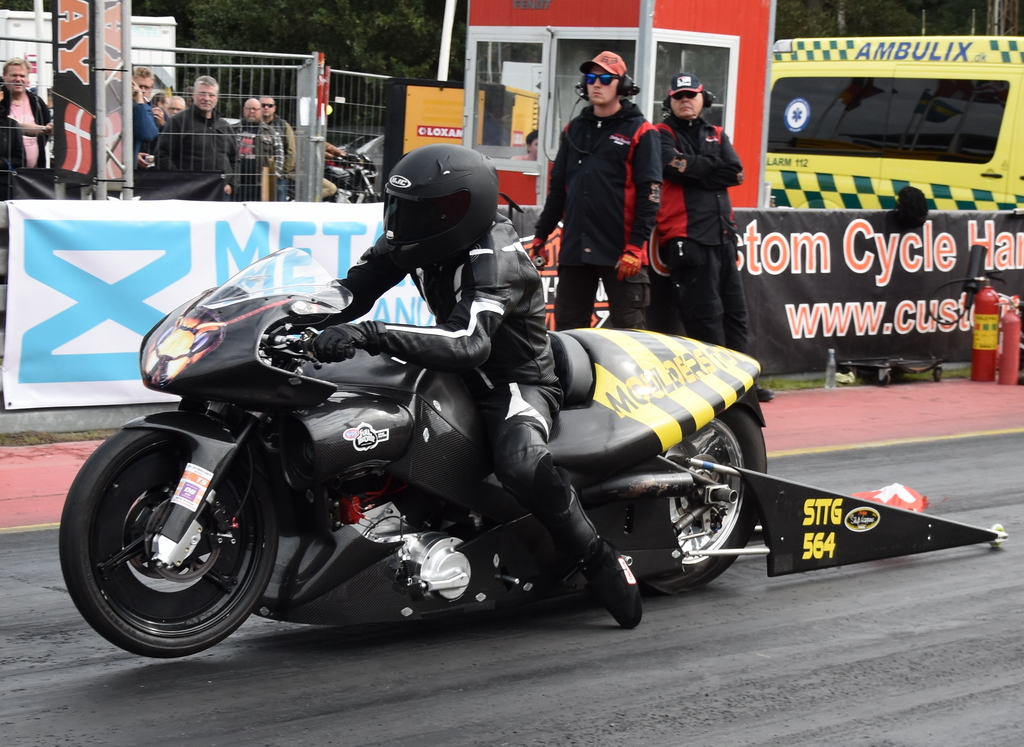 Olaf Menzi's 4.9 was quick enough to eliminate Torbörn Ström. But Olaf had slowed down, compared to the day before.

No show for Cord Albers in the semi finals, as he did not have a spare sprocket. 4.74 for Lymant.

Menzi slowed down again, now a 5.0, and Olaf got eliminated by Frederik Schack who did 4.79. 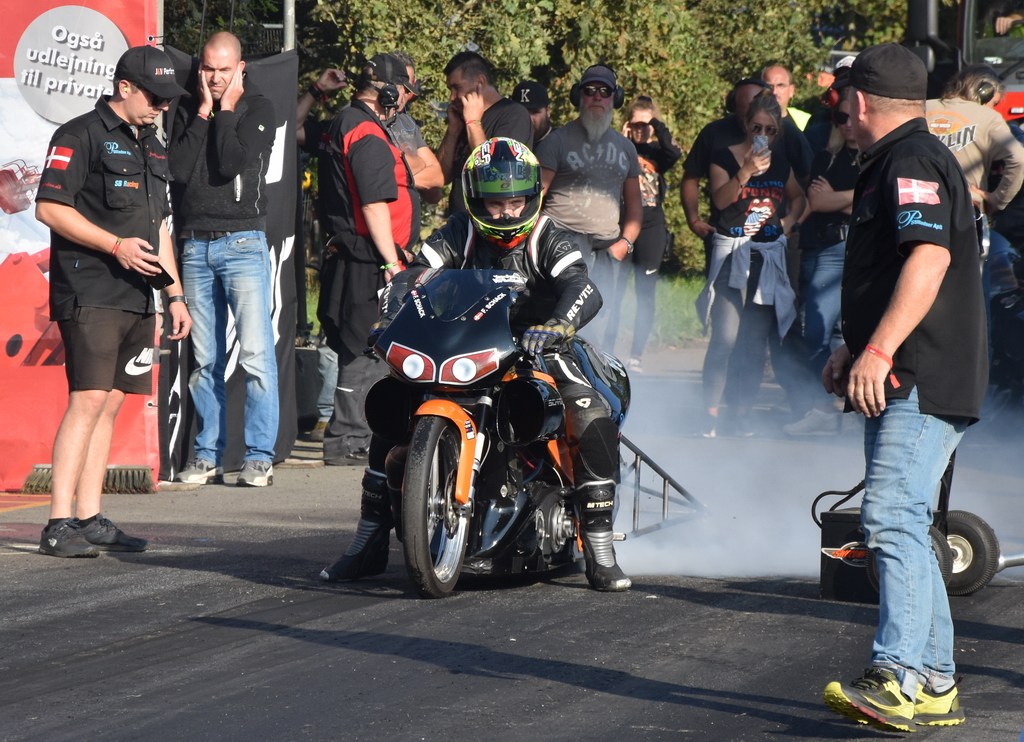 Joerg Lymant knew he needed a 4.6 to win the race, and that's what he did! 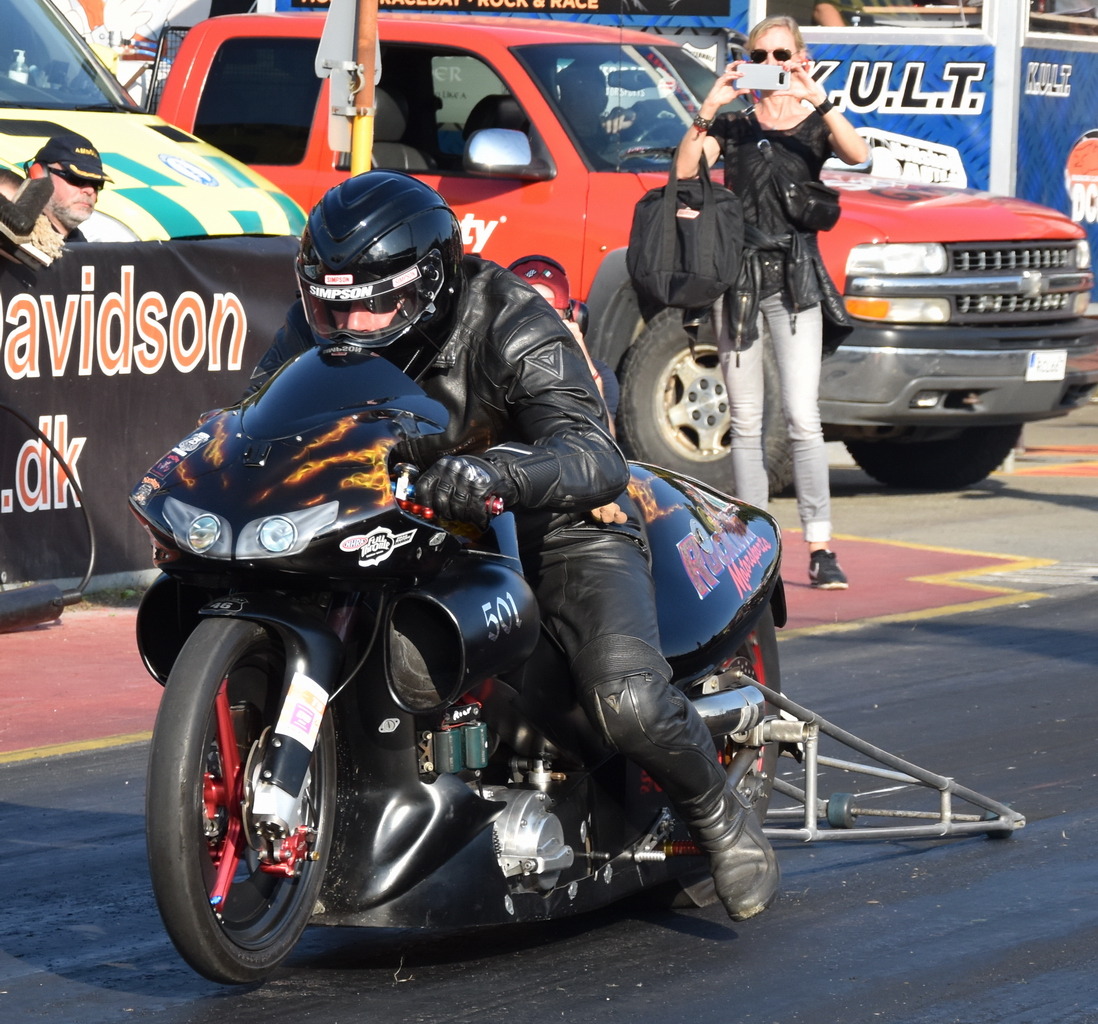 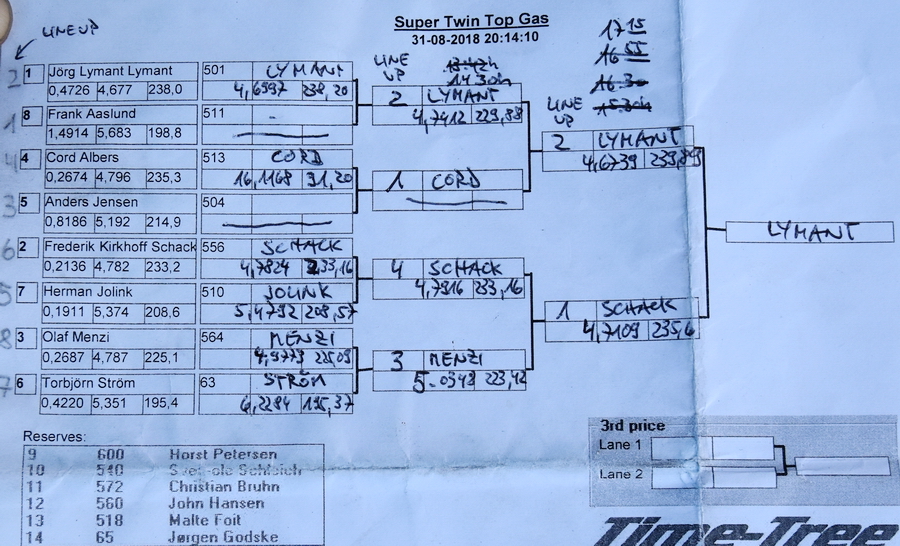 Lymant was the quickest of every round and saved his best for last. Well done Joerg! 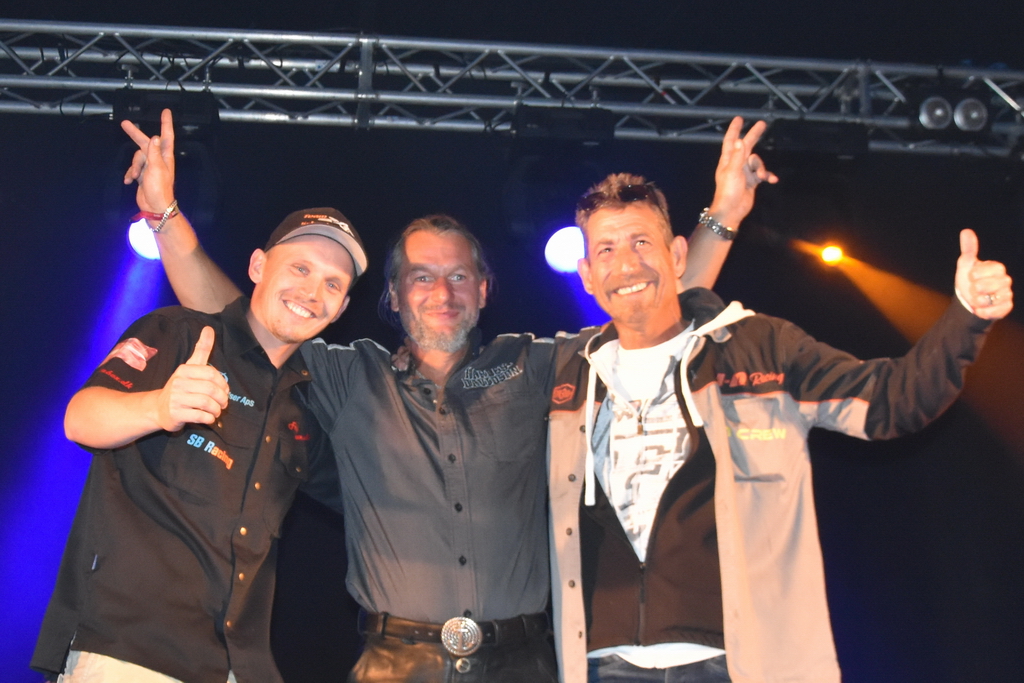 Joerg Lymant was already certain of winning the 2018 championship. Olaf Menzi gathered enough point at Mosten to become this year's runner-up.
If Schack would have won the race, Frederik would have been the #3, but Lymant prevented that, and the third place in the 2018 Euroserie goes to Jan Malmberg. 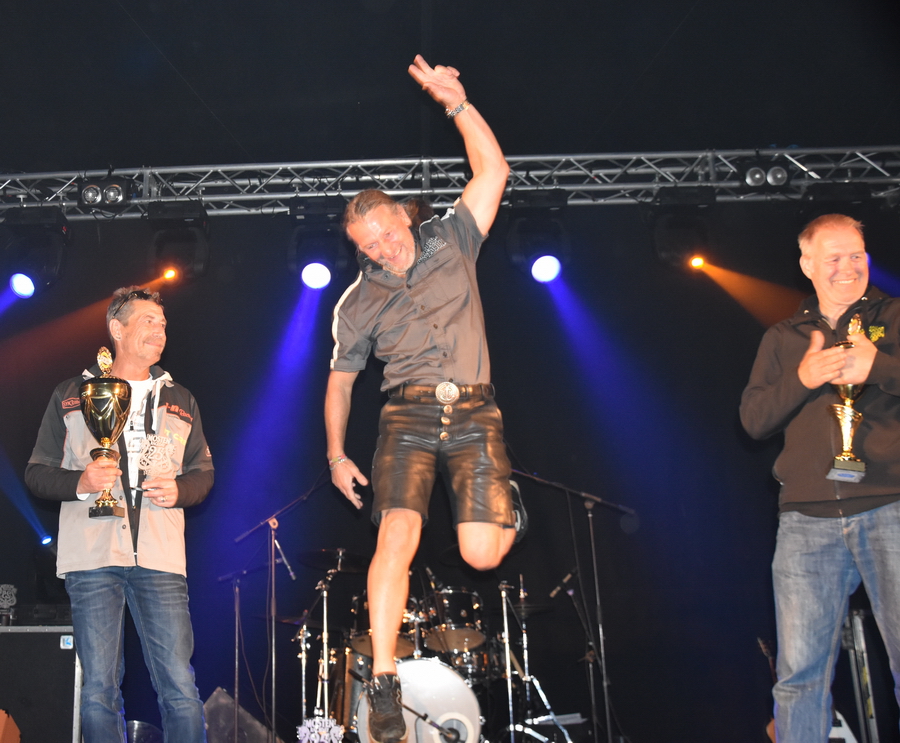 Many thanks to Hitz, Laffi, Morten, Holger and all the others at Mosten!
See you next year!

The annual meeting will be held in Januari. Details soon.